Every corner of our planet is teeming with breathtaking natural formations. Some, such as the aurora borealis, are well-known by many. Others lie undiscovered and waiting within the inner reaches of rain forests and oceans.

Some of these phenomena can only be found in the exotic realms of faraway places. But you don’t always have to travel that far. Fortunately, there are others that can be viewed in your own backyard. 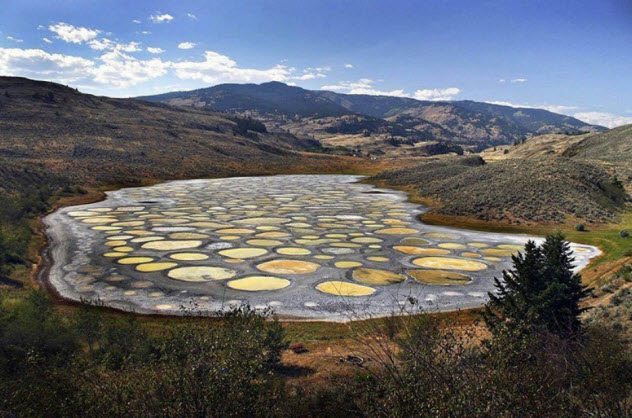 In Canada, there is a lake that seems to have been crafted by a child’s imagination, a place that would fit right in with Lewis Carroll’s Alice in Wonderland. The Spotted Lake in Osoyoos, British Columbia, is no ordinary body of water. Instead of a normally smooth surface, this lake appears to be covered in giant, colorful polka dots! The colors even change depending on the conditions of the water, ranging from a sulfur yellow to the deepest of blues.[1]

The Spotted Lake is made up of a collection of smaller, puddle-like bodies of water that are rich in magnesium sulfate, calcium, salt, and other minerals. In fact, it is said that the lake contains the highest concentrations of minerals in the world, so much that they were mined and made into ammunition during World War I. During the hot summers in the surrounding desert, the water evaporates into the small puddles while the salts crystallize in between to form walkways.

To the Okanagan First Nations people, the lake harbors special medicinal properties. While it was saved from housing a spa on its shores in the 1970s, it is now fenced off and protected as a sacred site. Still, it is easy to view the strange and enormous pools from a distance as the glassy, mirrorlike formations are hard to miss.

9 Oceans In The Sky 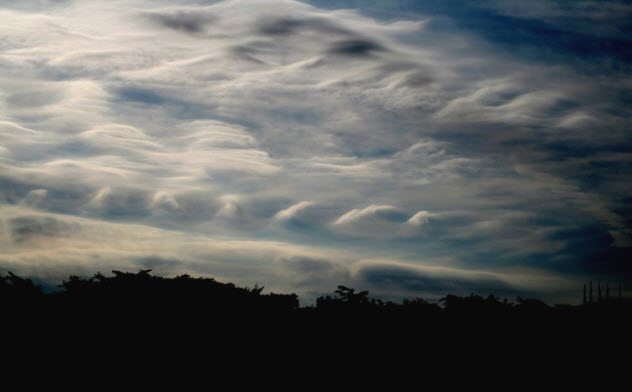 The sight of rolling ocean waves is usually reserved for beaches, but who knew they existed in the sky as well?

Floating up in high altitudes, these Kelvin-Helmholtz clouds are fun to look at but not to surf. Formed when two air currents at different speeds collide with each other, they resemble the wavy, curved rise and fall of the sea.

The clouds have a flat, horizontal base, and the waves on top are evenly spaced. They are most easily formed on a windy day when the layers of air are apt to meet each other. As warm air stacks on top of cooler air, the faster layer on top transforms the cloud into the whimsical shape.[2]

But look fast! Due to the air’s velocity and warmth, the cloud soon evaporates, leaving behind nothing but a memory and the lingering feeling of awe. 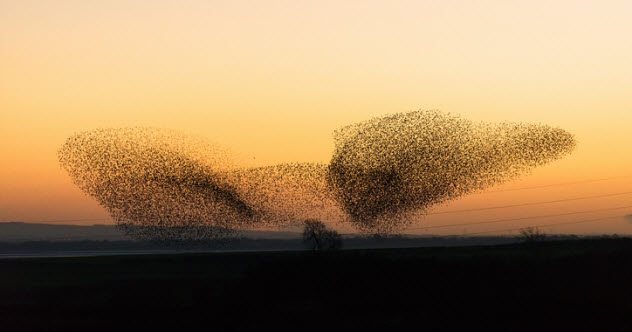 What’s that strange, dark-colored cloud twisting and turning in midair? It is a breathtaking sight of millions of tiny creatures coming together to perform this aerial stunt. The enormous shape contracts and expands, soaring through the skies in whirling formation. Is it a swarm of locusts or some rare weather phenomenon?

Neither. Instead, it is a formation of thousands upon thousands of starlings.

Starlings are ordinary songbirds that feed on seeds and insects. While their black plumage has a glossy iridescence up close, they are often regarded as pests because of the damage they cause to crops and airplanes.

Yet, these small birds prove that strength lies in numbers. Starting in the autumn season, thousands of starlings flock together in what is known as a murmuration, with numbers swelling to 100,000. A murmuration of more than six million was recorded in Somerset in 1999!

Together, they fly in search of places to roost during dusk. Though the hypnotic formations are breathtaking to look at, murmurations are not just for show. They provide safety for the birds as predators have a much harder time picking out a single target among thousands. Bigger flocks also mean warmer roosts in the chilly months. In addition, they are better able to socialize and share information on where to find food.[3]

The starlings know just how to fly so that they don’t crash into each other. With a reaction time of 100 milliseconds, they are vigilantly aware of the speed and direction of the birds around them. They adjust accordingly so that the entire murmuration may reach speeds of 32 kilometers per hour (20 mph)! 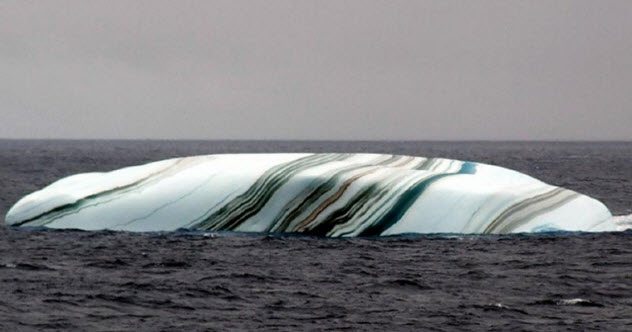 Antarctica is well-known for its pristine white icebergs, glaciers, and caves. Yet some of these icebergs are not ordinary—they seem to be covered in an array of black, brown, yellow, and blue stripes!

With the appearance of marbled gemstones, these decorated icebergs are formed when chunks of freshwater ice come into contact with the seawater beneath them. The seawater, which contains sediment and minerals, freezes into the ice and develops beautiful dark bands around it.

As the iceberg is shaped by the waves and wind, the colored layers are further warped into different patterns.[4] Blue stripes are caused by water freezing into a crevice so fast that no bubbles form. Water with algae results in a green tint, resulting in these beautiful natural formations. 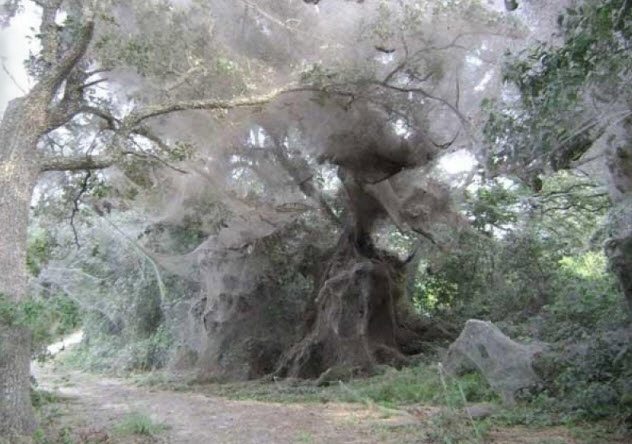 The grass has an odd gray tint to it. In fact, everything is wrapped in a blanket of fine, see-through silk: the fields, the bushes, even the trees. This dusty covering was actually created by thousands of tiny spiders, leaving behind a world encased in creepily billowing sheets that resemble something out of a haunted house.

The gigantic webs can span a whopping 30 meters (98 ft). They are usually made after a flood or heavy rain, prompting the spiders to escape to higher ground. To do so, they release a thin strand of silk and let the wind carry them off like hot-air balloons, a process known as ballooning.[5] A mass ballooning event involves thousands of the tiny arachnids, which trail their silk behind them and land expertly in fields to scare passersby.

In some cases, the webs are 0.8 kilometers (0.5 mi) long and so thick that those who attempt to travel through them end up covered with the substance. The event has occurred all over the world, including the US, Australia, Great Britain, and Pakistan. Sometimes, however, the spiders’ escape attempts fail, causing the wind to repeatedly blow them up and over trees to create a matted carpet of silken nightmares. 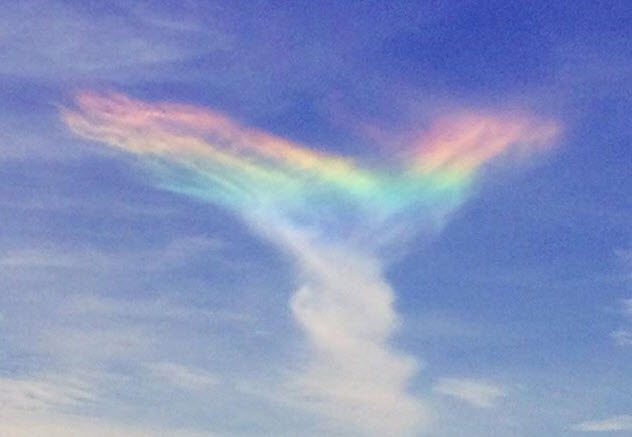 Fire rainbows are dazzling displays of light that resemble arching wings or feathers. Unlike your average rainbow, these are much more difficult to make. Cirrus clouds, or clouds that resemble thin and wispy strands of hair, are located in high altitudes. It is only when the Sun is very high in the sky that fire rainbows can develop.[6]

What’s more, the ice crystals inside the clouds must be positioned in the right shape and direction, with their faces horizontal to the ground. If the crystals are lined up correctly, sunlight will bounce off the same way as in a prism, producing a breathtaking show of many colors. 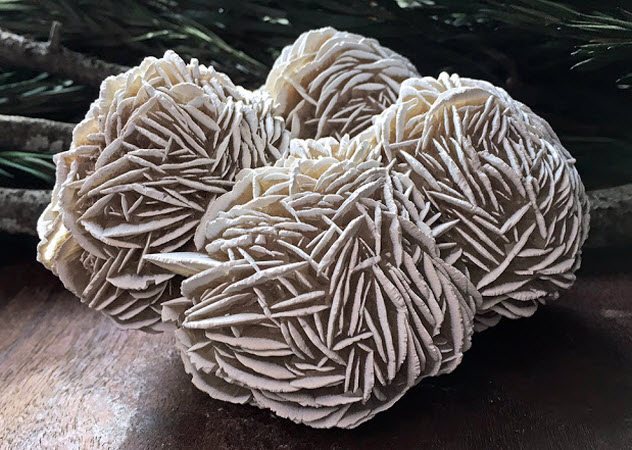 No, these aren’t petrified roses. Instead, they are made of crystal.

Found in dry, sandy areas such as the Sahara Desert, the “roses” are formed from disks of gypsum or baryte crystals stacked together over tens or hundreds of years to resemble the petals of a flower.

The crystals form when water evaporates and are shaped like flat plates that can measure up to 1 meter (3.3 ft) across. Clusters of desert roses may be found together, giving the appearance of a sandy bouquet. The largest single rose was 25 centimeters (10 in) high and weighed 57 kilograms (125 lb), while the largest cluster tipped the scales at 454 kilograms (1,000 lb).[7]

With their beauty and unnatural appearance, it’s no wonder that they are sought after as prized specimens for collections. 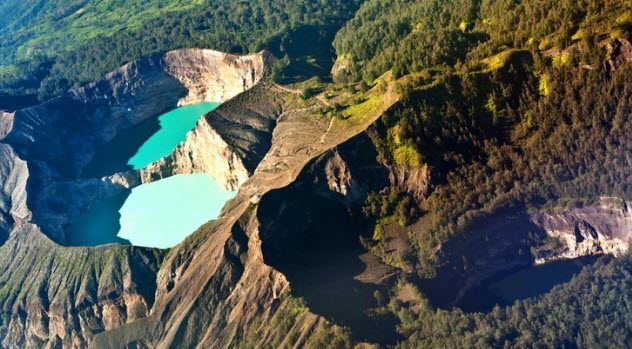 There are three crater lakes nestled at the foot of Mount Kelimutu in Indonesia, hailed by the locals as mysterious resting places for the afterlife.

Indeed, with their unnatural appearance, the lakes seem otherworldly. Coupled with their uncanny power to change colors at any time, they are believed to reflect the moods of the ancestors’ spirits. The Lake of Old People is typically blue. The Lake of Young Men and Maidens is usually green, while the third, the Bewitched Lake, tends to be red.[8]

Occasionally, they take on hues of white, black, brown, and turquoise, like tricks in a magician’s act. While other strangely colored lakes are caused by bacteria, the explanations for these lakes are baffling. Although there is no confirmed answer, most agree that the interaction between minerals in the water and volcanic ash are the culprit. 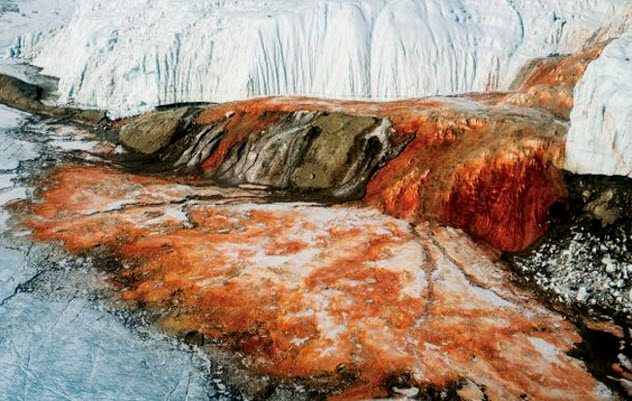 A waterfall is located in the McMurdo Dry Valleys of Antarctica. Startlingly, the water is tinted a bold scarlet as though a river of blood were pouring out of the glacier’s side. Fortunately, the reason behind this phenomenon is a lot less eerie.

Two million years ago, the Taylor Glacier trapped a “time capsule” of microbes within it, essentially forming a community of organisms that were shut off from the rest of the world. Even without sunlight, heat, or oxygen, the microbes flourished, proving life’s abilities to survive even in Earth’s most extreme conditions.[9]

Eventually, the trapped lake flowed out through a crack in the ice, forming a waterfall with the ecosystem hidden inside. The falls run red due to high levels of iron and salinity, which explains why the water continues to flow instead of freeze. 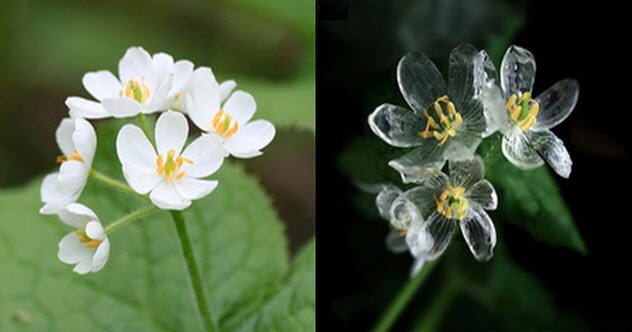 Despite their name, skeleton flowers are an alluring sight. Their normally white petals become as clear as glass when they come into contact with water. During downpours, the normal-looking blossoms suddenly take on the appearance of crystalline structures.

This is because of the petals’ cell structures. On rainy days, water soaks into the petals and increases light transmission to give them their transparent look. Once dry, they revert to white flowers. As they flourish on cold, forested mountainsides, the rare blooms are found in only three places on Earth: China, Japan, and the Appalachian Mountains.

These white flowers are not just pretty. Scientists from China have put them to good use. They have created a transparent surface that repels oil while underwater, which has been used to develop diving goggles and other optical tools.[10]