Some of us love that time of year when the leaves have all fallen off the trees, the air starts to turn colder, and the snow falls for the first time of the season. For everyone else, those white snowflakes bring back memories of slipping on ice, shoveling our cars out of our driveways, and that gray slush that covers the roads for months. (Of course, if you’ve never seen snow, you’ll just have to imagine.)

No matter how you feel about it, though, cool uses for snow and ice are limited only by our imaginations. Here are 10 of the most mind-blowing and entertaining uses we have today.

10 Snow Can Be Turned Into Drinking Water 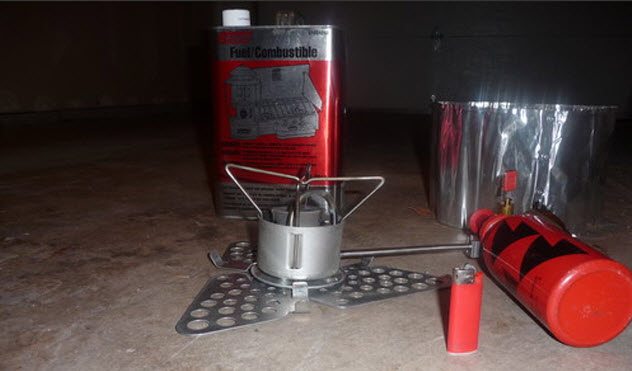 If you ever are in desperate need of drinking water or just want to have some fun, having snow on the ground could come in handy. To make drinking water from snow is not as simple as just letting it melt. There are a few steps that you have to take first.

The snow that you collect needs to be “clean.” This will usually be snow that is white and does not have sticks or branches in it. Once your snow is collected, you will need to melt it by mixing it with purified water in a pot. You will then need to use a strainer to get any unwanted toxins out of the water.[1]

Finally, boil the water again. This will also work if you are camping. The water can be boiled using a pan, an open flame (campfire), and an article of clothing through which to drain the water.

Remember, however you make your drinking water from snow, it is important to keep it in a place where it will not freeze. This can include close to your body if you do not have access to heat.

9 Ice Can Be Used To Make Fire 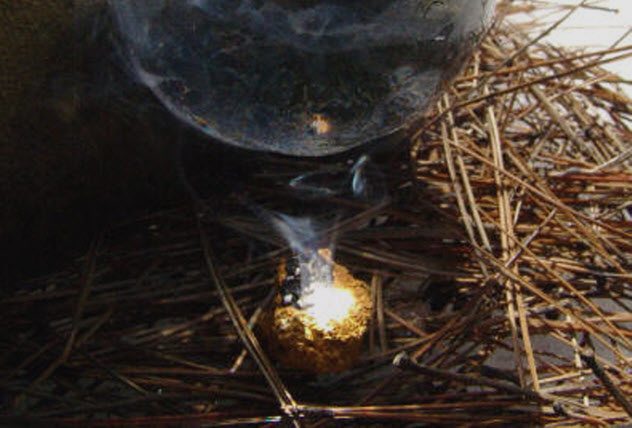 In the case of ice (or water) and fire, opposites really do attract. To make fire from ice, the ice will act as a magnifying glass. Yes, you will be like a young child trying to burn ants on the sidewalk with a magnifying glass. As funny as that sounds, this concept will work and look very similar to that.

You will need a thin, clear piece of ice—the kind that can be found over frozen water. You will then hold your piece of ice so that the Sun refracts through it to where you want your fire to be. Refracting the light onto sticks or grass can help the fire to start.

Something else to consider is the curvature of your ice lens. The curvature will help in refracting the rays from the Sun so that their magnification will be greater. Higher magnification equals a higher chance of starting a fire.[2]

8 Ice And Snow Can Be Used For Shelter 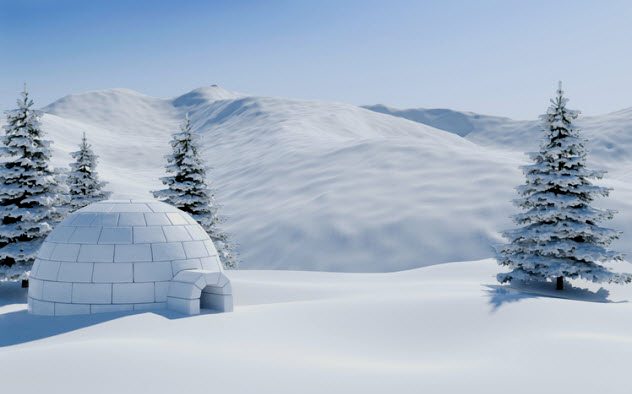 Still seen today, igloos are a form of shelter that are made from ice. The Inuit people have been known for making these structures for thousands of years. Igloos are temporary houses made of ice and snow that they use for shelter while out hunting or on another type of expedition.

Building an igloo involves a combination of gathering snow and then digging through that snow to fit inside. The Inuit work together to build igloos because they require so much effort.

If you are looking for a quick way to find shelter in the snow, there are other ways to stay warm besides making an igloo. Wolves have been known to make shelters from snow in Arctic regions. They dig into the snow just high and wide enough so that they can fit inside. If there is too much extra room inside the tunnel, it will get too cold and the wolf could die.

The key to survival with this shelter is to make it just big enough for you to fit. That way, your body heat will not escape from the tunnel and less cold air will reach you inside.[3] 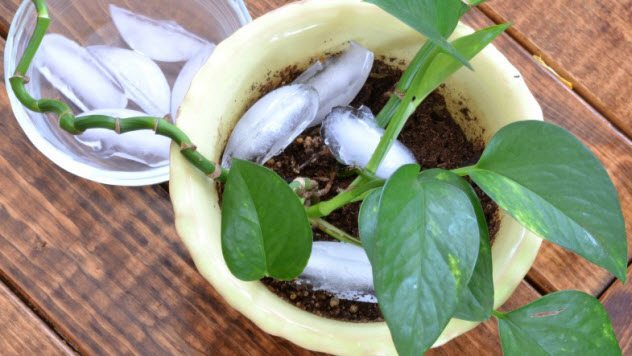 Plants need water and oxygen to survive. One of the most likely causes of plant death is overwatering them. When a plant is overwatered, it cannot take in oxygen, which will cause it to die. Underwatering plants can also lead to death.

For a plant to live, it needs a combination of oxygen and water. Water temperature is also important when watering plants. If it is too hot or cold, it could shock the plant and kill it. How, then, could ice and snow be used to water a plant?

Unlike cold water, ice and snow melt slowly into the plant’s soil. As this is a slower process, the plant does not get a shock from the cold substance. Furthermore, the plant will get the water it needs without being overwatered.

To water your plants with snow or ice, you can press your fingers into the plant’s soil to make a small divot. You place the ice in the divots. Plants usually need 1–3 ice cubes to absorb a sufficient amount of water.[4] 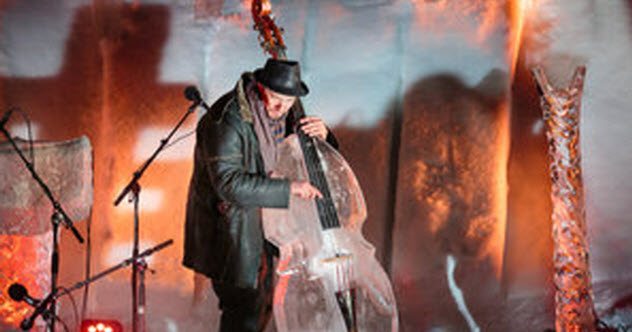 Musical instruments can be made out of ice! Every year, this spectacle is created at Ice Music Festival in Norway. Sculptors use actual ice to saw and create instruments from ice trumpets to ice guitars.

As you can imagine, these ice instruments sound a bit different than “normal” instruments. Their sounds also change as the instruments start to melt. This creates a unique experience in every show for the guests who come to the festival.[5]

Usually, Norwegian folk songs are played at this festival. To go along with the traditional folk music and ice instruments, the sets for the festival are inspired by the Norwegian landscape. They are made from snow and ice and can be enormous. Some are made of walls of ice and snow, while others are large tunnels made from these substances. Icicles are also used to decorate the sets. 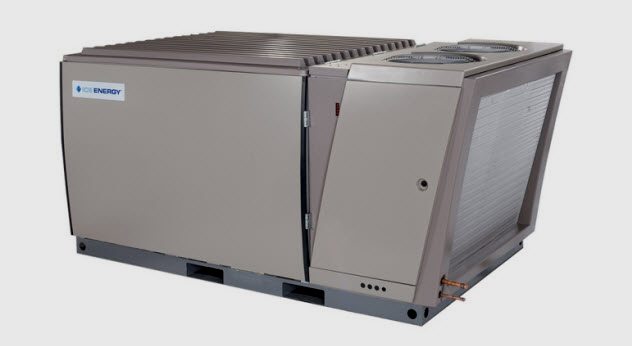 For the past 12 years, a company called Ice Energy has been using ice to improve air conditioning costs for some residents of the United States. Ice Energy created an air conditioning unit that makes ice and then uses it to cool down a house or other building.

This works by having a designated part of the air conditioning unit make the ice during the hours of the day that are less stressful on the unit (usually at night). During the busy hours that the air conditioner is on, the stored ice is then released to cool down a building.[6]

how to remove chewing gum from clothes with ice

Gum can go from enjoyable to a real nightmare the second it gets stuck to something. It is always funny to see the kid who had to cut off part of his hair because he got gum stuck in it or the person on the sidewalk endlessly scraping his shoe on the ground to get rid of unwanted gum.

If you find yourself in one of these situations, there is something you can try. Removing gum from clothes, carpet, or even hair can become possible with ice or snow. This concept works in a similar way to putting water on gum. When gum becomes wet, it gets hard. Ice and snow go one step further.[7]

They can actually freeze the gum if they are on long enough. One ice cube is enough to do the trick. Once the gum is frozen, you will need to work carefully to remove it without ruining your clothing, pulling out too much hair, or pulling out carpeting. 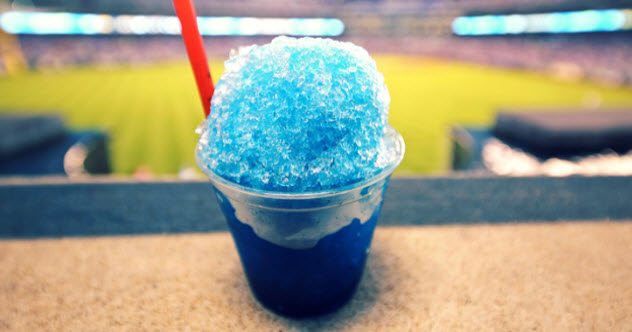 Snow cones have been around for hundreds of years, and their origin actually came from snow. The Romans were the first ones to think of the idea of eating snow as a treat. Snow was brought down from the mountains to the cities below. The Romans used wooden tools to carve up the snow and then added syrup to it. From their invention, snow cones continue to be a treat today.

In 1919, the first snow cone machine was invented.[8] It was able to shave and crush up ice to get snow cones to customers even faster. These machines started popping up at fairs, festivals, and even in shops. This treat has changed a lot since it was first created, but snow is still to thank for why we have it today.

2 Hotels Made Of Ice 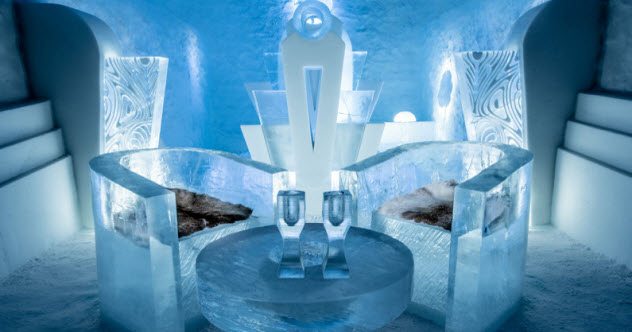 In Sweden, there is a real hotel made partially from ice that is fittingly named the Ice Hotel. The structure is made from steel and, in some areas, a mixture of snow and ice.

Throughout the hotel, there are warm and cold rooms. Of course, the cold rooms are partially made from snow and ice. Ice covers the walls, ceiling, and floor. The furniture in these rooms is even made from ice and snow.[9]

So, how can you survive the night in an ice-covered room? The beds have actual mattresses with a lot of blankets to help you get through the night. If you are a person who would rather see the cold rooms but not stay in one, you can bunk in one of the hotel’s warm rooms or simply settle for a tour. 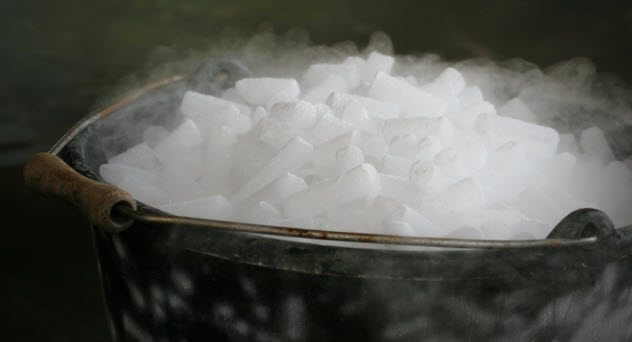 Dry ice can be used for science experiments, cooling food, and even getting dents and hail damage off your car. When dry ice is placed against a metal object, it will condense the metal. After holding dry ice to the dent a few times, it is possible for the dent to reduce in size or even vanish.

I am a teacher and have always loved writing in my free time.