Today, Vikings are known mostly for their ferocity as barbaric raiders who lived to loot, pillage, and burn. They were formidable adversaries whose merciless forays into Europe gave rise to a special prayer for deliverance among their victims. They not only plundered and murdered victims, but they also raped and enslaved survivors.

The Vikings were also phenomenal engineers. Their inventions and innovations gave them an edge in battle, trade, and other pursuits, enabling them to sail across oceans, seas, and inland rivers.

Although many of their technological marvels were related to battle, some of their inventions and innovations revolutionized sailing and navigation. Others were useful for personal and military travel through harsh environments or bivouacking in cold, rugged terrain. One of their inventions reflects their personal vanity and sense of self.

Each of these 10 amazing Viking inventions and innovations reflects the true nature of the Norsemen as much as their prowess in battle, their piratical practices, and their daring seamanship. They show another forgotten or neglected side of the medieval Scandinavian character. 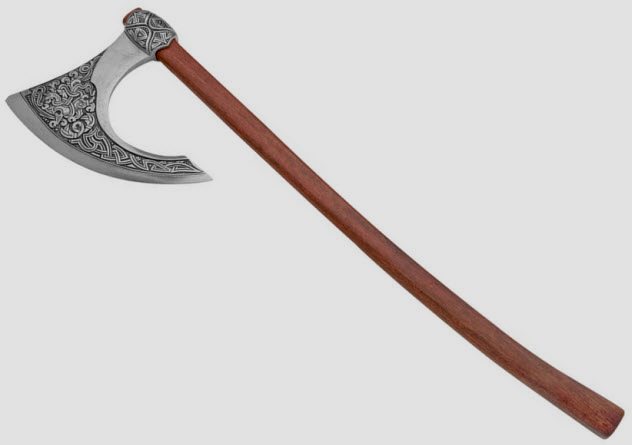 Although early Viking battle-axes were simply axes used to chop wood, this tool was modified over the years and became a battle-axe unique among medieval warriors. The blade became larger and broader. A hook was added to the lower end of the blade. In battle, the hook could be used to catch an enemy by the foot or the rim of his shield. The axe handle became longer, allowing Vikings to strike their foes from a greater distance.

Well-balanced weapons, the battle-axes were easy to use and effective in inflicting wounds or causing deaths. Although some Viking stories include scenes in which the axes are used as throwing weapons, such a tactic was seldom, if ever, used in battle. However, it might be employed in retaliation for injury.[1] 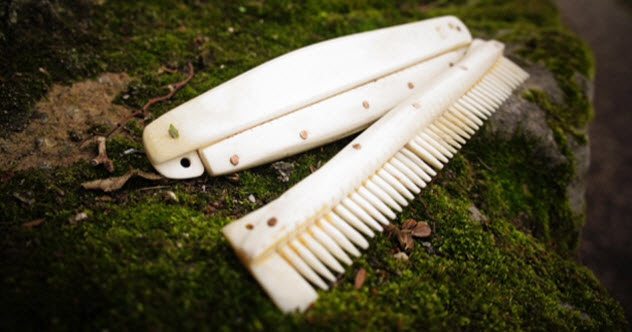 Most Viking inventions and innovations were related to the hit-and-run military campaigns conducted during their raids and involved shipbuilding, camping, combat, and other related practical enterprises. Despite their penchant for waging guerrilla warfare, it seems that the Vikings were vain about their appearance. When they sailed off in search of plunder, they took with them the combs they created from deer antlers.

“You might expect these to be throwaway objects, but in some cases, they were superbly decorated, and all were massively overengineered,” archaeologist Steve Ashby said. He added that the combs were made of the same material as specialized tools like polishers, saws, and rasps.

For Vikings, appearance was an important aspect of their identity. “They took a great deal of care with their grooming and often carried combs with their swords and knives on their belts. They frequently even took combs to the grave,” Ashby explained.[2]

After the Norman Conquest in the 11th century, comb-making died out in England. This may have been the result of the Forest Law, or perhaps antlers became prohibitively expensive. But, in Sweden, combs imported from Norway continued to be purchased and used. 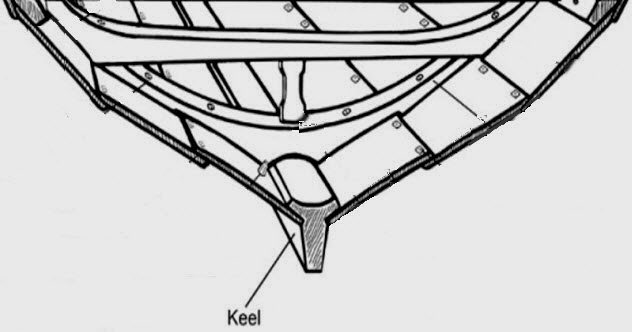 Roman and Celtic designs provided the bases for the earliest Viking ships. These vessels were propelled by oars rather than paddles. In choppy waters, such ships tended to capsize. They were also slow, so trips were usually brief and followed the course of the shoreline.

During the eighth century, a Viking invention revolutionized shipbuilding and maritime voyaging. The keel gave stability to Viking ships so that they became seaworthy. It also became a base to secure the mast. Instead of relying on oarsmen to power the ship, a huge sail of up to 245 meters (800 ft) was added as an important propulsion method.[3]

With the keel, Vikings were no longer limited to short forays along the shore. They were able to carry food, timber, and animals as cargo across distances of 6,400 kilometers (4,000 mi) in the Atlantic Ocean. 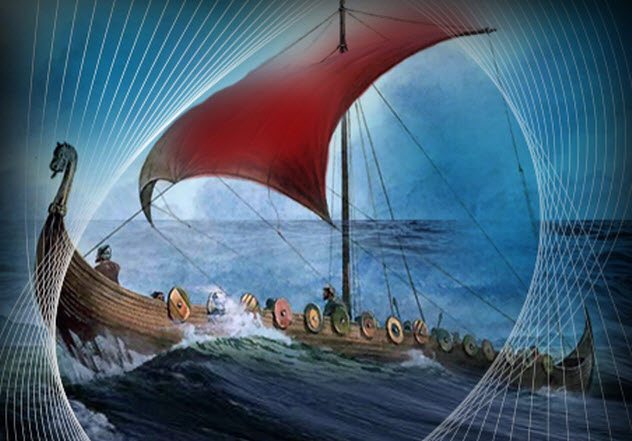 A marvel of engineering, the Viking longboat was unparalleled in the medieval world. The Vikings enjoyed advantages in war, trade, and exploration thanks to their ships’ flexible, durable designs and their ability to sail in many different directions according to the wind.

Dr. William Short, who specializes in Viking history and culture, pointed out that the ships’ especially shallow drafts enabled them to operate in shallow water. So they could travel up river and “surprise people in places where no one expected an oceangoing ship to appear.” From their homes in Scandinavia, the Vikings journeyed as far west as Vinland (Newfoundland), as far east as Russia, and as far southeast as a portion of the Byzantine Empire (Turkey).

As a result using the beitass, a “spar that helped to brace the sail against strong winds,” longboats could tack with changing winds, making them highly maneuverable. Unlike other ships of the time, Viking vessels were also amazingly flexible.

As Short points out, “They weren’t firmly nailed together, [so] they actually bent with the waves rather than taking the full force of the waves and possibly breaking.” Their ships’ flexible design was another characteristic that allowed the Vikings to sail the open sea despite rough waves.[4] 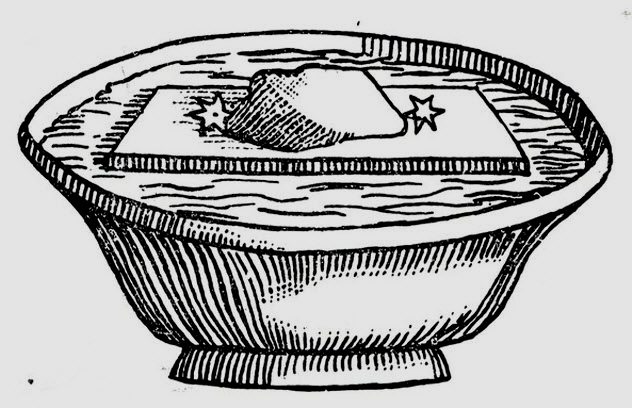 Using the mineral magnetite (aka lodestone), which is abundant throughout Scandinavia, the Vikings invented one of the first magnetic compasses. The Chinese were the only other culture to have invented such a compass, possibly even earlier than the Vikings did.

Only when the other Europeans began to trade with China were they able to obtain magnetic compasses from the Chinese. For 500 years, the Vikings alone had this instrument among Europeans and they kept its existence a secret. Using their compasses, the Vikings were able to sail across the Atlantic Ocean despite the occasional presence of thick fog.

Neither the Vikings nor most other medieval mariners were able to determine longitude well, if at all, but the Vikings were adept at reckoning latitude. They knew that the Sun marked the east at sunrise and the west at sunset. They also understood that, “at noon the Sun is due south [and during] months when the Sun does not set below the horizon, the position of the Sun at midnight indicates due north.”

This knowledge allowed them to employ their magnetic compasses in navigation.[5] 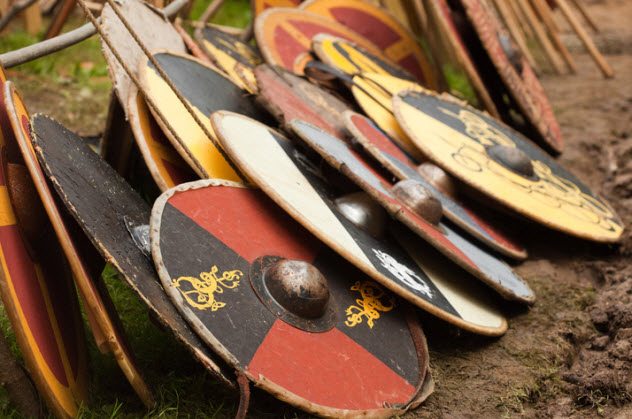 The Viking shield was like no other medieval buckler. In size, it was 75–90 centimeters (30–35 in). Used as a defense in combat, the shield also protected the Vikings from winds and waves during their sea voyages.

The flat face, or board, of the shield was made of seven or eight planks from firs, alders, or poplars. These woods were light and flexible. Rather than directly joined to one another, the planks were probably anchored together by other attached parts like the handle and leather cover. It is also possible that the Vikings glued the planks together.[6]

The shield’s thin, flexible wood made it less likely to be split by the blows of an enemy’s weapons. The wood’s thinness absorbed the force of impact, while the supple wood’s fibers bound around the blades of a sword as it got stuck in the wooden shield. This helped to block blows.

Viking warriors formed lines and overlapped their shields to form a defensive “shield wall” that deflected enemy missiles and resisted penetration of their ranks. 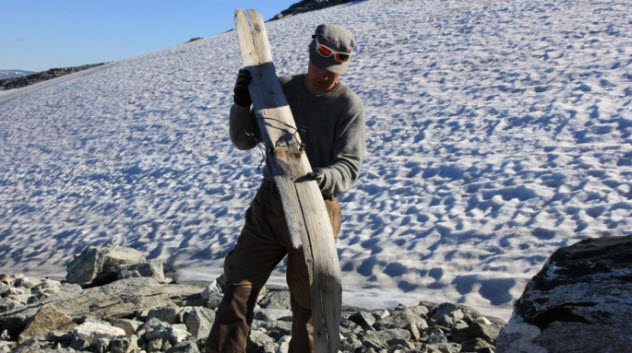 When not pillaging, looting, raping, and killing, Vikings took time to enjoy skiing. Although the Russians and Chinese may have invented skis before the Vikings did so, the Norsemen introduced Western-style skiing. The word “ski” is derived from the Old Norse skio.

Throughout the Middle Ages, Scandinavian hunters, farmers, and warriors often used skis. In Norway, 18th-century troops participated in competitive skiing matches. In the 1700s, Swiss soldiers also trained and competed on skis. These events were inspired by the Viking tradition of skiing for recreational and transportation purposes.[7]

Even the Norse gods skied and walked on snowshoes according to illustrations of Skadi (the goddess of bowhunting, skiing, winter, and mountains) and Ullr (the god of snowshoes, hunting, the bow, and the shield). 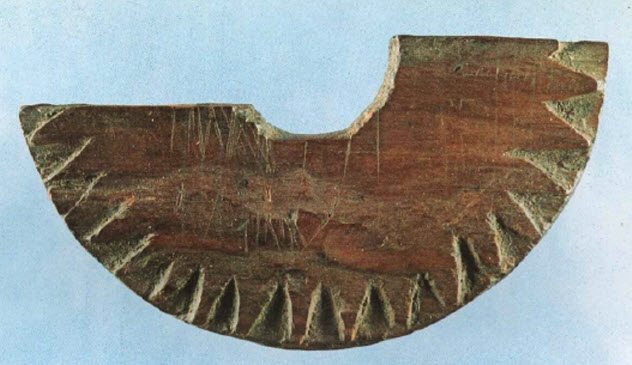 The Vikings’ sun compass was a simple but ingenious navigational device that allowed them to sail great distances. The sun compass consisted of a peg, the gnomon, inserted through a hole in the center of a circular, wooden, or soapstone plate known as the sun shadow board. The board was held horizontally so that the gnomon stood vertically.

The shadow of the gnomon fell across the board. Its position was marked, and the process was repeated every hour from sunrise to sunset. A line drawn to connect the points made a hyperbolic curve, the gnomon line, which was determined by the ship’s latitude, the Sun’s declination (height above the equator), and the gnomon’s height.[8]

In navigating, the Vikings had to compensate for variations in the height of the Sun at various times of the year. To offset the effects of their ship’s pitch, the compass was left to float in a container of water held above the ship’s deck. 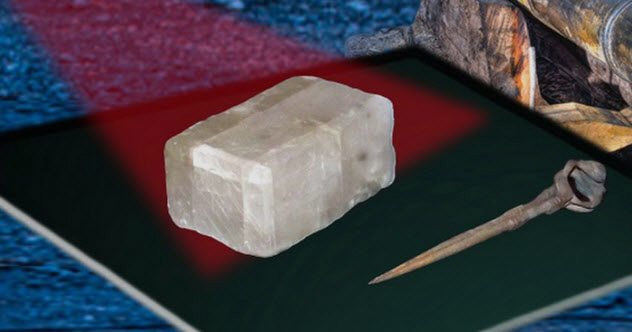 A calcite crystal (aka Icelandic spar) was found amid the wreckage of an Elizabethan warship known as the Alderney ship. The vessel sank in 1592 around the Channel Islands.

The crystal’s location suggests that it may have been used as a navigational device. Although no complete calcite crystals have been found at Viking sites, a fragment of one was found at such a location recently. The two discoveries—the fragment and the Alderney crystal—constitute the first evidence that the Vikings’ fabled sunstone may have actually existed.[9]

Due to its shape, the crystal doubles an image by bending or polarizing sunlight. By holding the sunstone so that the images merge, a navigator could have determined an east-west direction even in heavy fog, under cloudy conditions, or after the Sun had descended beyond the horizon.

Relying on a sunstone during conditions that precluded the use of a sun compass, Vikings might have drifted north or south. But on the next sunny day, they could have employed their sun compass to correct their course. Using the instruments to complement one another allowed the Vikings to sail in all sorts of weather and under both favorable and unfavorable conditions. 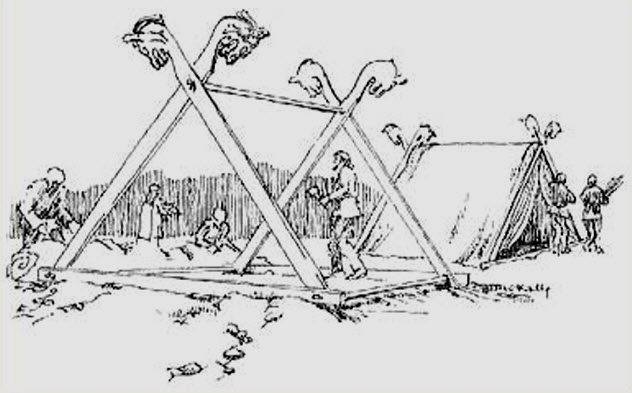 The Viking tent was plain, practical, and brilliant. Tent frames were discovered on a buried, ninth-century Viking ship in Gokstad in Sandar, Sandefjord, Vestfold, Norway.

The bottoms of a pair of crossed beams were inserted in each of two ends of a square wooden platform. Then, a pole was run through each pair of beams near their tops. Next, a rectangular piece of material 5 meters (17 ft) long by 4 meters (14 ft) wide was draped across the pole and its ends were secured to the other two sides of the platform.[10]

The 3-meter-tall (11 ft) tent could be set up in minutes, and it provided its users with a dry shelter with a wooden floor. There was even a decorative element in the four dragons’ heads carved into the tops of the support beams, two of which looked one way while their companions gazed in the opposite direction.