Everyone likes to receive a gift every now and again, especially if it’s from someone we love. With the exception of cats bringing dead prey that we probably aren’t going to eat, animals aren’t exactly known for their gift-giving skills.

But as we will see here, it appears that many animals are fond of giving presents, whether it’s a ball of spit or a lethal poison. Here are just 10 examples of gift giving in the animal kingdom. 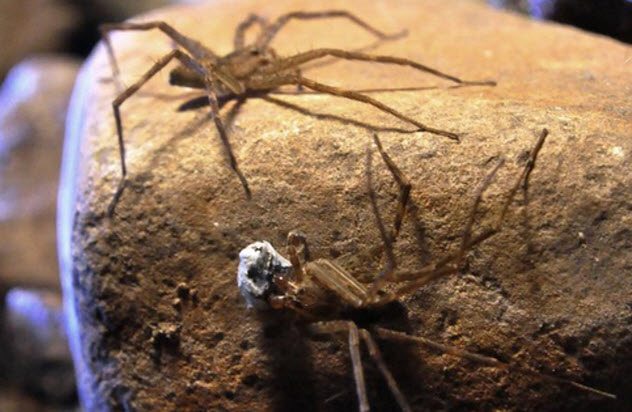 Gift giving isn’t just about what you give but how you give it. No animal understands the importance of presentation better than Paratrechalea ornata. Males of this South American spider species are known to use gifts to woo females, presenting them with a bundle of prey wrapped in silk. The bigger the present, the better his chances. Apart from the nutritional benefit, it is theorized that the presents help arouse the females due to their resemblance to egg sacs.

But we all know that boy spiders are only ever after one thing, and some of these creepy-crawlies don’t care what cheap tricks they have to pull to get it. This includes wrapping low-quality prey or even just the remains of prey that they have already consumed.

So while the female is busy unwrapping what she thinks is a thoughtful gift, he’ll have his nasty little way with her and dart off before she realizes. One study found that as many as 70 percent of the gifts given are fake.[1] 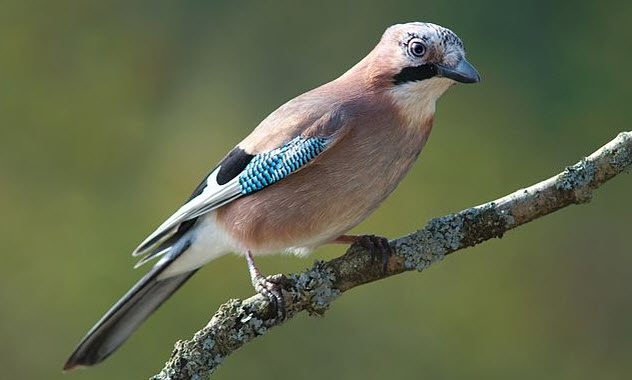 Some animals may only give gifts because they think they’re going to get something in return but not the Eurasian jay. It appears that these stand-up guys like to give gifts to their mates simply because the females will enjoy the presents. While that may be difficult for us to understand, it seems that these birds may have what is called the “theory of mind,” which is the ability to think from another person’s (or bird’s) perspective.

In one experiment, males would be able to see their mates eating either moths or worms and would then have the opportunity to give them either one. If the female had been eating moths, she’d be given a worm. If she was eating worms, she’d get a moth. When the males could not see what she had eaten, there was no correlation.[2]

This shows that the males understand that the females would rather have something new than more of the same. The researcher conducting the experiment likened it to a man giving his wife regular chocolate versus her favorite chocolate. She’ll accept both, but one is going to make her happier. 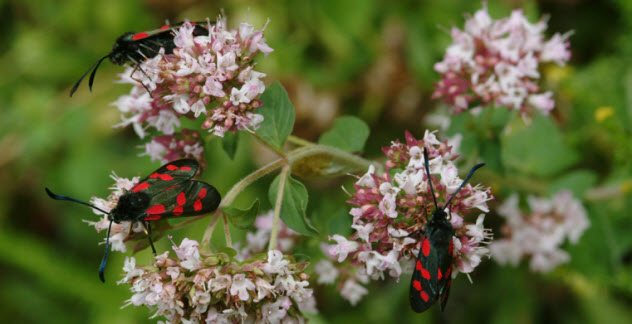 Whether it’s for a birthday, Valentine’s Day, or an anniversary, who among us can say we don’t enjoy getting a big box of cyanide? Six-spot burnet moths produce their own cyanide, which they use as a defense mechanism. But it also uses a lot of their energy and nutrient reserves.

For this reason, males looking to mate will use their cyanide-producing chemicals to attract females. The females can detect how much of these chemicals a male has through his pheromones and opt to mate with those who have the highest levels.

Since the chemical levels go down in males and up in females after mating, the prevailing theory is that the chemicals are transferred through the sperm. When the eggs are laid, the mother will transfer some of these chemicals to her newborns, giving them a powerful defense and a much better chance at survival.[3] 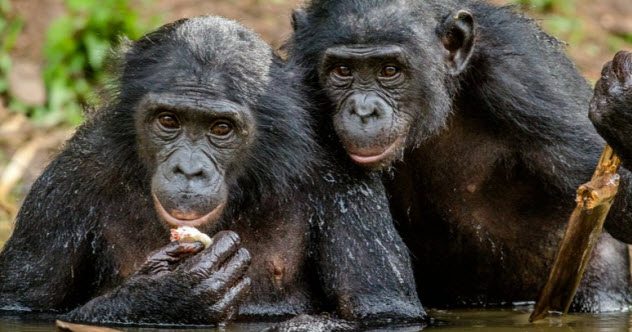 A nuptial gift is the term for a gift that a male gives a female during courtship or copulation. More often than not, they have some nutritional value, and almost all gifts given in the animal kingdom can be considered nuptial. But for an example of gift giving motivated by something other than the desire to procreate, we need look no further than our closest relatives, bonobos.

Despite their reputation as one of the most sex-obsessed species in the world, bonobos have developed the interesting habit of giving food to strangers. This is highly unusual as most animals are concerned either with self-preservation or preservation of others in their group.

But bonobos are highly social and love making new friends. For this reason, they are happy to part with a bit of food if it means they get to interact with bonobos from other groups.[4] 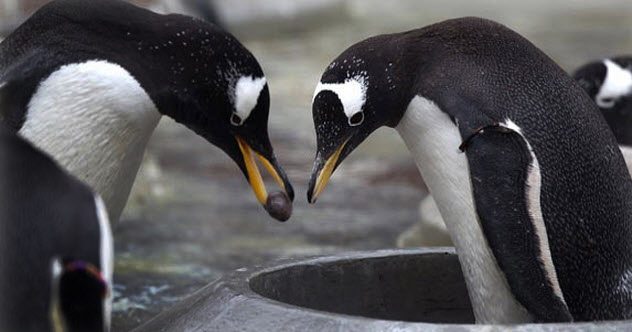 As probably the most famous example of animals giving presents to their loved ones, males of various penguin species will use pebbles as a way of courting females. Penguins are well-known for mating for life and so have become a symbol of romanticism in the animal world. But like all good things, the Internet has needlessly distorted the truth around this story.

You’ve likely seen some sort of meme or trivia site claiming that males will search far and wide for a beautiful pebble to present to his potential mate, with the females apparently viewing it as a piece of jewelry or art. In fact, males will work hard to find pebbles for females but for more than just aesthetic reasons.

Penguins use these pebbles to build nests. But since stones are hard to come by in Antarctica, they have to work hard to find them. When a male presents a female with a stone, she knows that he is asking her to build a nest together. So these stones are more than trinkets that the females think are pretty, the pebbles are essentially penguin proposals.[5] 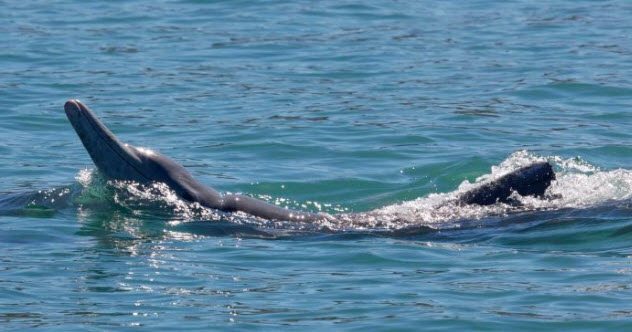 If there’s one thing you should never, ever, get your girlfriend as a present, it’s a sponge. But apparently, nobody has given this crucial bit of advice to male humpback dolphins, which attempt to attract potential mates by doing just that.

As well as playing a tune from his blowhole and striking what is known as a “banana pose,” a male dolphin will retrieve a sponge from the ocean floor, bring it to the surface, and present it to the female after tossing it around or even wearing it as a hat.

Researchers believe that the males put on this strange display because the sponges are notoriously difficult to retrieve. As well as requiring a great deal of strength to pull free from the ocean floor, the sponges release a toxic mixture when attacked by predators. So only the smartest dolphins can gather them safely. However, as macho as these dolphins may think they look, researchers have their doubts that the females are impressed at all.[6] 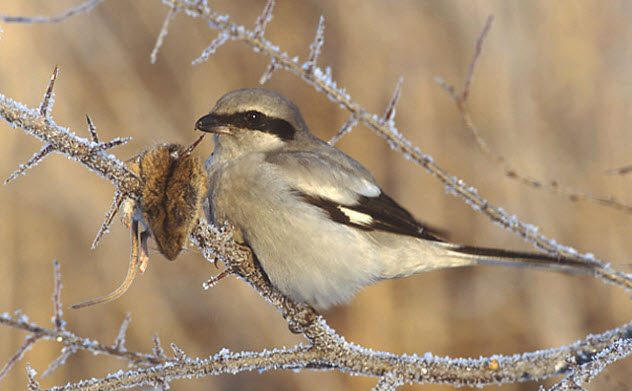 The great grey shrike is a delicate little songbird not unlike a robin in appearance. In personality, however, the shrike is a sadistic little killer, earning itself the nickname “the butcher bird.”

While most other birds of its size primarily eat things like worms or berries, the great grey shrike prefers to eat small animals such as lizards, frogs, mice, or even other birds. But the reason it has developed the reputation of being a butcher is that, instead of simply eating its prey, the shrike will first crush its skull or spine before impaling it on something like a thorn or piece of barbed wire.

These macabre kebabs are usually a method of keeping food for a few days, so the shrike can come back for a meal whenever it wants. For this reason, it is called a “larder.”

But during mating season, males will put these larders in clear view of females. The shrikes with the most well-stocked larders will attract the most attention. Once a female has selected a mate, she is free to raid his larder as much as she wants.[7] 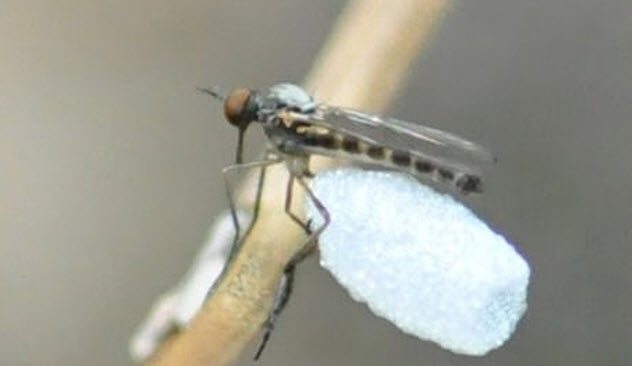 Paratrechalea ornata may think it’s great for thoughtfully wrapping its gifts in silk, but dance flies know it’s not a real party without balloons. There are over 700 species of dance flies, most of which use saliva or silk to fashion a balloon made of hundreds of tiny bubbles. Then they present these balloons to potential mates during their mating dances.

What is most interesting about these flies is how their balloons seem to be related to their “confidence” and mating success. Males with the largest prey will make the smallest balloons, while those with less to offer will make huge balloons dotted with scraps of food.

But in some subspecies, there is no food. They simply make balloons and pass them to their mates. Although larger males make larger balloons, balloon size isn’t the most important thing.[8]

One study found that large males with medium-sized balloons had the best success. According to this theory, the large balloons attract females from farther away but an oversized balloon will make it harder for the male to fight off other males when a female gets close. (You try fighting off rival suitors while holding a giant balloon and see how well you do.)

The lesson here, gentlemen, is that overcompensating can actually harm your chances. It’s not the size of your balloon that matters, it’s how you use it. 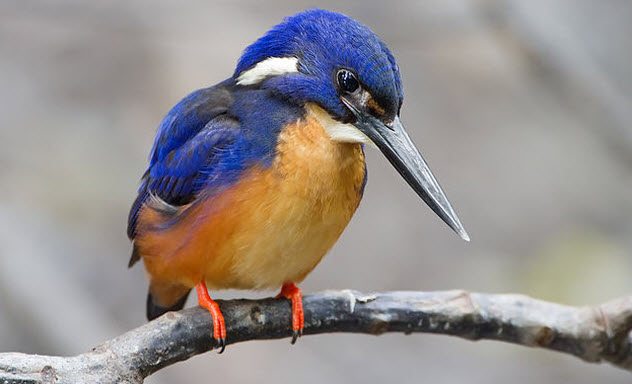 Fans of the Alien franchise could be forgiven for confusing the terrifying Xenomorph with the not-so-terrifying kingfisher. While the alien is more humanoid than birdlike, one of its most famous features is its ability to open its mouth to reveal a second, extendable mouth. During mating season, male kingfishers pull a similar trick in the hope of attracting females.

Kingfishers usually swallow their prey headfirst for ease of swallowing. But when the time comes to reproduce, males will hold the fish backward. They will then open their beaks, revealing a protruding fish staring females in the face.[9]

It was once thought that this could be a bonding ritual. But one study found that the more fish a female was given, the more eggs she laid. The predominant theory now is that males take on the exerting hunting work so that females can conserve energy for making eggs. 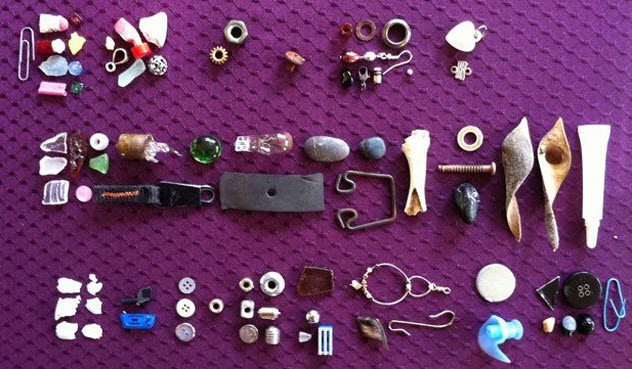 Magpies are famous for stealing shiny objects, but it seems that they’re not the only birds with a fondness for the flashy. Over the course of several years, a young girl from Seattle named Gabi Mann developed a relationship with her local crows.

This began when Gabi was four. The crows would pick up scraps of food that she had dropped. Pretty soon, Gabi was willingly sharing her food with the crows, and after a few years, she and her brother began feeding them every morning in the backyard.

After a few years of freeloading off the little girl, the crows began offering her something in return. When all the food was eaten, the crows would leave behind shiny gifts for Gabi. These included buttons, a small lightbulb, screws, earrings, a heart pendant, and the “best” half of a “best friends” necklace.[10]

But possibly the most impressive gift from the crows was given to Gabi’s mother, who lost a lens cap off her camera one day. When she returned home, she found the lens cap on the bird bath. CCTV showed that the crow that returned it even washed it in the bath before putting it down.

If you’d like to form a relationship with your local crows, consistently offering them unsalted shelled peanuts are apparently the best way to win their hearts.