When we’re dazzled by the impressive leaps of modern technology, it is easy to forget the small shifts in innovation that pulled our species forward. Ancient light bulb moments may no longer seem great compared to spaceflight and the next self-parking car, but they do serve a valuable role.

New discoveries provide clues about lingering historic mysteries or reveal unexpected answers. They rewrite pages on agriculture, art, rituals, and even forgery. But not every object pulled from the earth can be so cleanly given a label, let alone a purpose. Some are so strange that experts keep changing their minds about what they were supposed to do. 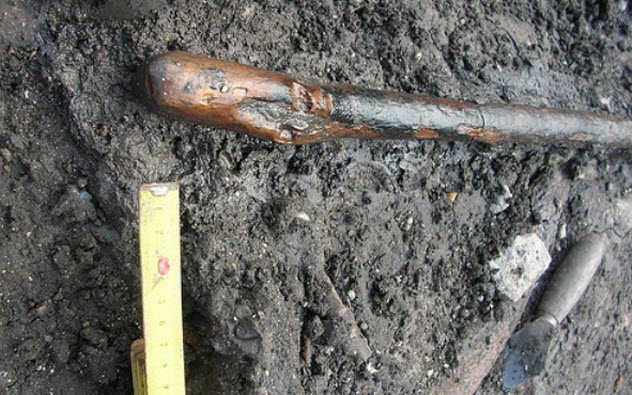 At Poggetti Vecchi in southern Tuscany, workers dug the foundations for new thermal baths. At one point, the bones of a prehistoric elephant surfaced along with unusual wooden tools.

The site and artifacts were around 171,000 years old, dating back to a time when early Neanderthals called Tuscany home. Though the artifacts were found in 2012, it was not until 2018 that scientists gave the tools a closer look.

All of them were straight boxwood branches, around 100 centimeters (39 in) long. The handles were rounded, and the tips were carved into points. The type of wood was not accidental, either. Boxwood remains among Europe’s toughest timber. This suited the purpose the tools most likely had—as sticks digging for roots and other edibles.[1]

Analysis confirmed that the wood was scraped by stone tools and shaped by fire. The Poggetti Vecchi collection is evidence of master toolmakers at work. It is also among the oldest finds that proves Neanderthals counted fire among their technology. 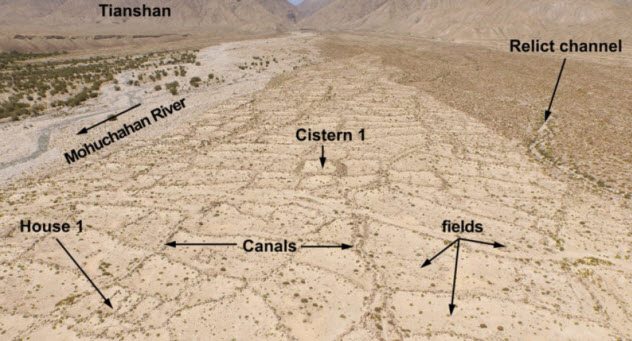 When Chinese researchers recently flew a drone over the desert, they found something remarkable. An area that has seen a century of archaeological investigations contained vast unknown ruins. At the bottom of the Tian Shan Mountains were farm houses, graves, and an irrigation system that included canals, cisterns, and dams.

The area belongs to one of the driest deserts on Earth, even 1,700 years ago when this community flourished. How herders gained the irrigation technology to flip barren earth into farmland could mend the region’s agricultural history.

Previous theories suggested that the knowledge was brought by soldiers from the Han dynasty (206 BC–AD 220). The new ruins support an opposing suggestion that irrigation ideas happened earlier and, in this case, came from the West via the Silk Road.

Incidentally, these trade routes included the Tian Shan Mountains. Similar systems were found in ancient Turkmenistan and Iran. A nearly identical one surfaced in the desert of southern Jordan.

The sophistication of the Tian Shan community was a surprise, however, because they were thought to be small-time farmers. Instead, their irrigation system appeared more sustainable than the larger Han dynasty works.[2] 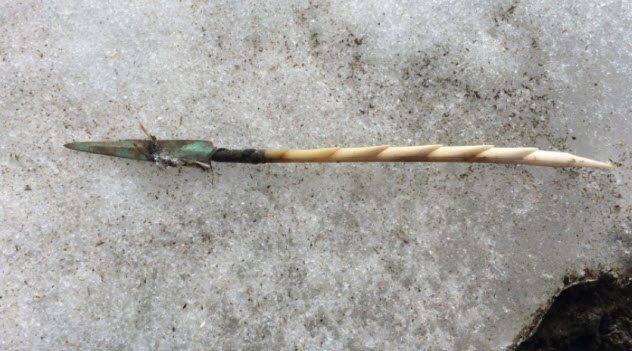 During the filming of a documentary in Yukon, crew members spotted a protrusion in the ice. It turned out to be a new-looking artifact around 936 years old. Discovered in 2016, the arrow point was unique. Made of antler, barbs were carved into the surface and it had a copper end blade.

The Yukon ice fields used to be caribou hunting grounds. Over time, researchers found a lot of weapons that had missed their mark. These lost tools showed how hunting technology changed.

For about 8,000 years, hunters used throwing darts. Inexplicably, around 1,100 years ago, they were abandoned for archery. The antler arrow would have been shot from a bow. Once lost, it undoubtedly caused some distress to the owner. Even back then, it was a rare piece.[3]

Whoever crafted the point used a copper nugget, likely found in a local creek and almost 100 percent pure. The point is also one of the oldest examples of archery and copper metallurgy in Yukon. 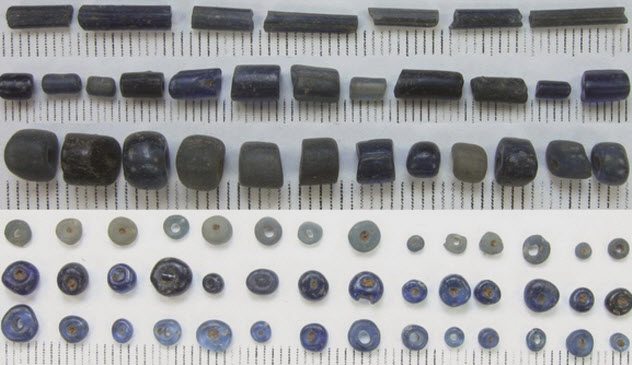 When beads were found at Igbo Olokun in southwestern Nigeria, it rewrote the history of glass. Previous finds in the region suggested that there was a workshop that remelted imported glass. But despite claims of craftsmanship, there was no evidence that sub-Saharan Africa produced its own glass before the arrival of Europeans.

When Igbo Olokun recently yielded over 12,000 glass beads and a good amount of slag, analysis proved that it was homegrown. For the first time, chemical composition matched local materials and not the usual imports from Asia, Egypt, the eastern Mediterranean, and the Middle East.

Instead, they were high in lime and alumina. Glass with the same signature turned up at other West African archaeological sites. The locally produced glass was extensively traded and also predated a European presence by centuries. The Igbo Olokun glassmakers set up shop in the 11th century AD and continued their trade for another 400 years.[4] 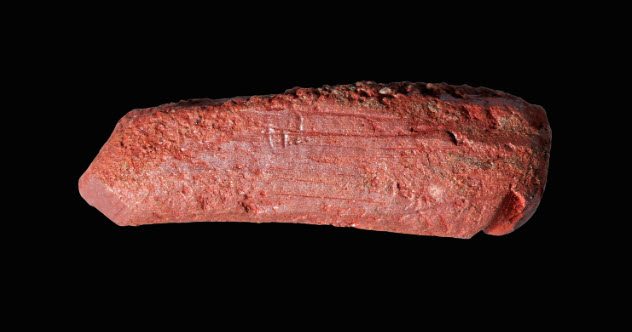 In 2018, the world’s oldest crayon was found in North Yorkshire. At first glance, it does not seem like much. The tiny artifact measured 22 millimeters (0.9 in) long and 7 millimeters (0.3 in) wide. It was made of ocher.

But the 10,000-year-old stump has pedigree. Pulled from peat that was once a Stone Age lake, the crayon belonged to a site covered in ancient art. The one end was pointed and appeared used. It is likely that the tool was used to add bright red to drawings on stone or skin.

Red was an important color during the Stone Age, and its discovery confirmed what researchers already knew—the location was a prime spot for hunter-gatherers. It may also reveal the significance of why they decorated this particular area so much.[5]

The crayon was not the only thing dropped by a prehistoric artist. At the other end of the lake, archaeologists found another piece of ocher, this time in the shape of a pebble. 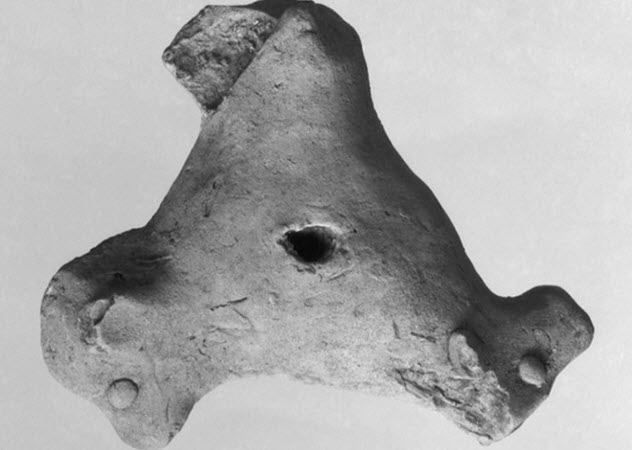 Roughly 4,000 years ago, somebody fired an unusual clay object. Made at Tell Asmar in Iraq, its shape and material keep everyone guessing today.

When pulled from the earth in the 1930s, the diggers noticed a bull, ibex, and lion on each triangle forming the object. They suggested that the artifact could have been spun for divination purposes. A museum cataloged it as a “spinning toy with animal heads” and displayed the plaything for the next 85 years.

In 2017, it enjoyed brief notoriety on social media due to the museum label and resemblance to a trending toy, the fidget spinner. These days, museum curators believe that the artifact was a weapon—a mace-head. It was found near a temple, which strengthened the new theory.[6]

In the second millennium BC, the mace was viewed as a weapon of the gods. It even looked like one. But clay is not the best material for a mace-head, which was normally made of stone. Perhaps this was a toy weapon. Mesopotamia’s artifacts include many clay toys. However, researchers do not believe that it was made to be wielded by kids. 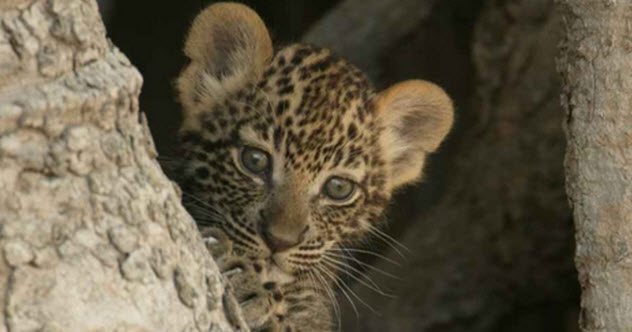 Rock piles appear to be scattered about Israel’s Negev desert. However, the trained eyes of researchers know better. The structures are not natural. Indeed, they are traps for carnivores.

In 2013, a pair was found together. One dated to around 1,600 years ago. Resembling Bedouin traps used in the last 100 years, the second was thought to be a few centuries old. The truth, when it came, was very different—it had been engineered 5,000 years ago.

This roughly placed their appearance with the first domesticated sheep and goats. The traps were near ancient animal enclosures, most likely to defend the herds from predators. The two traps belong to 50 identified so far in southern Israel.

A piece of meat was used to lure carnivores inside. Once the critter pulled on the bait, a door closed and boxed the animal in. The most unexpected was the age of the technology and how little it had changed over thousands of years.[7] 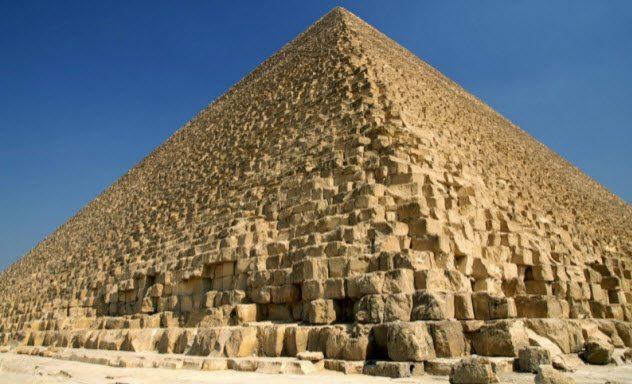 In 2016, a simple experiment in Connecticut possibly solved an engineering feat in Egypt. By tracking the fall equinox, researchers found an identical error in the placement of the Great Pyramid of Giza.

The pyramid is almost perfectly aligned with the main points of the compass. How the ancient Egyptians managed this remains a riddle. They left no documents explaining the monument’s construction around 4,500 years ago. If the experiment is correct, then the Egyptians obtained accuracy quite easily. There are other methods but none so simple.

On the day of the fall equinox (September 22), researchers marked a rod’s shadow against a wooden board during different times of the day. The result was a near-perfect line running east to west.

It also shared the exact same building error found in the Great Pyramid as well as two others. In a counterclockwise manner, all three are turned slightly away from the cardinal points. All the ancient Egyptians needed was the date, a sunny day, and a rod’s shadow on the ground.[8] 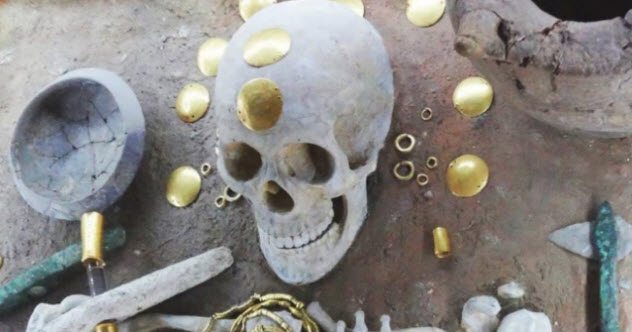 In 2018, tests on alloys suggested that counterfeit gold turned up in the Balkans 6,500 years ago. During 2013, the world’s oldest tin-bronze artifact was unearthed in Serbia.

The piece of foil, dating from the middle of the fifth millennium BC, pushed the history of alloy manufacturing back by 1,500 years. This lead to the 2018 study, which was an attempt to recreate every alloy possible from a copper-tin-arsenic combination. The resulting chart, showing 64 copper alloys, revealed that the degraded foil once glittered like gold.[9]

Most ancient alloys produced tougher metals to be used for weapons. But prehistoric Serbia appeared to have been so enamored with the rare precious metal that they simply faked more gold to meet the demand. This made beauty in the first copper alloys more important than any practical purpose.

Though hard to say, there was possibly no deception involved. Researchers believe that gold was so exotic that even its closest imitation was acceptable to those dazzled by the precious metal. 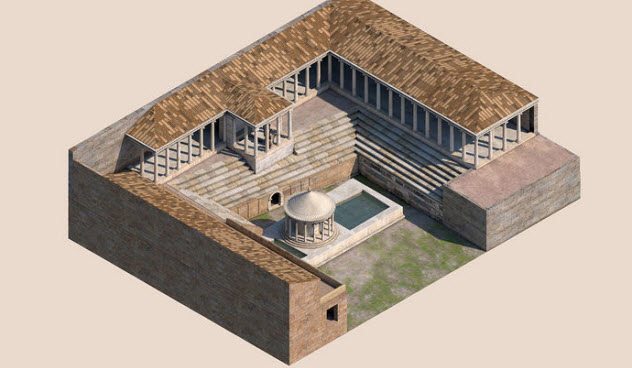 Across the ancient Mediterranean, Romans held elaborate animal sacrifices in a way that appeared miraculous. Priests led healthy bulls through stone gates called Plutoniums. The humans survived, but the animals always died—seemingly from nothing.

In recent times, researchers noticed that birds dropped dead when they flew near a Plutonium located in Turkey. Found in the ancient city of Hierapolis, the doorway led to a grotto. When the deadly shrine was investigated in 2018, the tales were proven to be true.

But there was no priestly magic. The gate was constructed over a volcanic fissure leaking carbon monoxide. The sun kept the gas thin. At dawn, however, a lethal “lake” of carbon monoxide gathered at about knee-height—enough to daze the animals. Once drowsy, the bull’s head would lower into the fatal depths until it collapsed from suffocation.[10]

The public viewed it as a miracle, but the priests understood that they were tall enough to escape the worst of it. Even though they hid this fact, the priests, like everybody else, were under the impression that Plutoniums led to the underworld and the carbon monoxide was the toxic breath of the hellhound Kerberos.

Read more intriguing stories about ancient technology on 10 Facts About The Pyramids That Could Prove Advanced Ancient Technology and 10 Signs Aliens Could Have Influenced Ancient Egypt.