Crowdfunding has been one of the great success stories of the Internet. Various websites allow creators to show their inventions to the world, and people who want to see them become reality can pledge money to support them. People who otherwise would have no access to funding can make their dreams reality.

Unfortunately, dreams are sometimes unrealistic. You may be able to create a slick video of your product, but the product itself may be trickier to make. Here are 10 projects that sought crowdfunding but perhaps should have stayed on the drawing board.

The two small arms of the Triton were said to remove the oxygen from water, working like a fish’s gills. It would allow users to dive to up 5 meters (15 ft) and provide oxygen for 45 minutes at a time. No wonder people were excited.

But problems soon emerged. The claims made for the device struck people as unbelievable. The amount of oxygen dissolved in water is relatively low. To extract enough for a human to breathe would require the Triton to pump around 2 liters (0.5 gal) of water per second, assuming that it could extract all the oxygen available.

To pump that amount of water would take a lot of power. But luckily, the Triton claimed to have a microbattery that was 30 times smaller than competitors and charged 1,000 times as quickly. You might think that the invention of this wonder battery would be enough to change the world, but as yet, it has not appeared.

Triton refunded the money put up by supporters in early 2016. But they relaunched immediately and raised almost $300,000 of new money while promising to ship the Triton by the end of the year.[1] As of March 2018, the Triton has yet to appear on the market.

Solar roadways are going to change the world, at least according to their inventor. By replacing asphalt roads with solar panels, you would generate energy, create jobs, melt snow, make roads safer, and make them easier to repair. Since Solar Roadways launched their campaign on Indiegogo, they have raised over $2.2 million in investments. Who wouldn’t want a world where roads produce clean energy?

We might all want it, but it is unlikely to happen soon. Perhaps the greatest problem is with how solar panels collect energy. By using tilted surfaces, they can maximize the amount of energy they collect. Flat road surfaces are not optimal for collecting solar power. Also, even a fine layer of dust or dirt on a solar panel will reduce its efficiency and roads are not the cleanest of places.

The first installation of the solar roadway did not work well, with several of the panels breaking when placed in a pedestrian area. Despite the criticism that has been leveled against solar roadways, they have won several prizes for their design and funding.[2]

The Dragonfly Futurefon was supposed to be a single device that met all your computational needs. The Dragonfly had a unique folding structure that allowed it to be a laptop, phone, and tablet all at once. Doing everything while looking very cool, it raised over $700,000 in funding.

The creator of the Dragonfly had been pitching a device with two screens for several years. When the Dragonfly was put on Indiegogo, people pointed out the flaws in its design. The very complexity that made it unique, along with its high-tech specifications, would make it expensive to produce.[3]

Alas, the product that was to be everything came to nothing. Investors have received nothing for their money. The Indiegogo campaign has not been updated since 2016, and the website is apparently sending collection agencies after the creators of the Dragonfly.

Zano was a small drone that promised to change the way people took pictures and videos. By promising to allow users to control it with their phones, the creators raised over £2.2 million on Kickstarter. The huge public interest in the drone shot expectations through the roof, only to have them come crashing down. The result was so catastrophic that Kickstarter hired an investigative journalist to find out what had gone wrong with the Zano.

With 12,000 customers waiting for their product, the team used the raised money to hire more staff and increase their production capabilities. Changes required to the Zano increased its time until delivery, and the company struggled to get the Zano to do one of the most impressive things it promised—track and follow the user.

The drone was only able to stay aloft for a few minutes at a time. To release more funds, a small batch of Zano drones was shipped. One user described it as “a continual nightmare of mega-underperformance.”

Zano went into liquidation, and the creators have been banned by Kickstarter from ever starting a new project.[4]

Controlling things just by gesturing at them seems like something from a fairy-tale book. When Logbar promised to deliver a ring that would allow users to control lights, televisions, and other pieces of tech, they raised $880,000 in backing.

Despite the exciting nature of the product, some people were immediately skeptical of the company’s claims. Gizmodo published an article pointing out just how hard it would be to shrink the required technology into a ring as well as the limitations of wearing it. Every time you did anything that involved water (e.g., washing your hands), you would have to remove the ring. Still, hopes were high.

When backers received their rings, they discovered a number of problems. One scathing review has been watched over two million times on YouTube. The ring was mocked for being too large. To use the ring, it had to be linked to your phone and you had to keep the app open there. The gestures that the ring detects were only picked up around 5 percent of the time.[5]

Coolest Cooler for the 21st Century

How much would you pay for a drink cooler to take on a picnic? When the Coolest cooler was put on Kickstarter, they raised $13 million. In terms of total investment, the Coolest cooler became one of the most successful crowdfunding projects of all time. The Coolest promised to have not only a cooler but also a blender to crush ice, a water-resistant speaker, LED lights, a bottle opener, and a host of other things.

According to the campaign’s FAQ page, the initial suggested date for delivery of orders was February 2015. But this was pushed back to July when the first orders were shipped. After two years, however, only around a third of backers had received their coolers, and 36,000 people were feeling decidedly cool about the Coolest as they waited patiently for theirs to arrive.

The Coolest is now on sale in stores. The owner says that they are using the income from these sales to fund the production of units to provide for their original backers.[6]

Providing clean and safe drinking water is a major problem in many parts of the world. When the WaterSeer promised to easily pull water from the air, Internet backers funded the idea to the tune of over $330,000.

The WaterSeer claimed to work by simply condensing water vapor from the air. Everyone has experienced droplets forming on a cold drink on a hot day, and the WaterSeer is supposed to work on the same principle. When warm air meets a cool surface, water in the air turns to a liquid.

Unfortunately, there appear to be some problems with the physics. The makers claimed that a single device could draw up to 40 liters (11 gal) of water from the air. But in warm, dry climates, the amount of water vapor in the air is limited. So the device would have to force huge amounts of air through the underground chamber, limiting the amount of time that the air can be cooled inside to release the water.[7]

It also requires that the part buried underground is colder than the outside air, which only occurs for around half the day in most places. While you cannot beat thermodynamics, there may be ways to improve the efficiency of the WaterSeer. 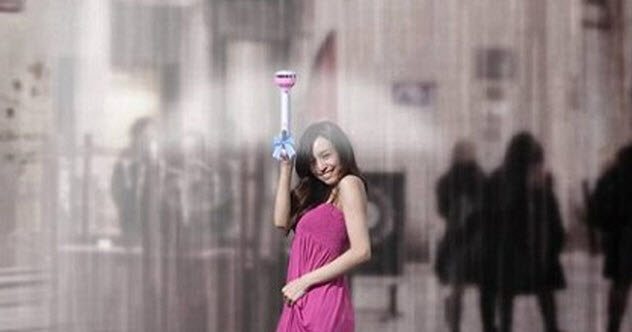 Rain is a nuisance. While the umbrella is a simple solution for keeping dry, wouldn’t it be better if it used jets of air to blast the raindrops away from you? The air umbrella raised $102,000 to produce their “invisible umbrella.” It seems like a simple idea and design, so users must have had high hopes for delivery.

Some people were skeptical about the product. The technical details were thin, and the charge of the umbrella lasted just 15 or 30 minutes, depending on design. Also, there would be the issue of shooting people beside you with both air and water as you walked along, probably not making you many friends on a busy street.

The air umbrella never shipped. Despite the inventors promising refunds, comments are still appearing on Kickstarter from investors looking for their money back.[8]

The laser razor actually works – but not very well

The Skarp Laser Razor was supposed to take the pain out of shaving. By using lasers to slice through hairs, these razors would leave the skin free of the irritation that blades usually cause.

The company’s original attempt at crowdfunding raised $4 million on Kickstarter but was suspended from the site because the prototype did not work. Once the campaign was removed from Kickstarter, the creators went to Indiegogo and raised $500,000.

The razor worked by shining laser light through a fiber. Wherever a hair touched the fiber, enough light leaked out to cut through the hair. Versions demonstrated publicly have struggled to cut hairs efficiently. The product can only cut a few hairs at a time and not very close to the skin.[9]

The projected shipping date of December 2016 went by without backers receiving their razors. The creators are still updating their Indiegogo site, though no release date is available yet. 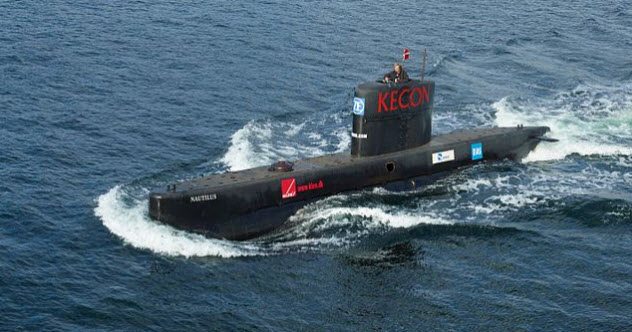 The UC3 Nautilus was a 17.8-meter-long (58 ft) submarine build by a collection of Danish rocket enthusiasts called Copenhagen Suborbitals. When their submarine needed expensive repairs, they put their project on Indiegogo to look for funding. They failed to reach their goal, but the submarine was relaunched.

The Nautilus was transferred to a different group to separate ownership from Copenhagen Suborbitals. But it was eventually passed to Peter Madsen, who had built the Nautilus. In late 2017, the Nautilus was reported to have sunk, with Madsen rescued from the water and later blaming a problem with the ballast tank.[10]

What was not known at the time was that Kim Wall, a journalist, had been aboard. Madsen claimed that he had dropped Wall off before the submarine sank. Later, he claimed that she had suffered an accident on board and he had dumped her body at sea. Two weeks later, Wall’s dismembered body was discovered with stab wounds. Madsen has been charged with murder and is awaiting trial.

Read more about bizarre crowdfunding projects on 10 Bizarre Projects That Combine Art And Science and 10 Outrageous Liars Who Tried To Profit From The Dead.