Ever since the revelation that Tyrannosaurus rex (T-rex) may have had feathers, most people seem to have built up a knee-jerk reaction to phrases like “scientifically accurate,” as though learning any more about the tyrant lizard king would ruin their childhood memories of big, scaly, tail-dragging monsters. A more accurate vision of T-rex, the logic goes, could only be less interesting—less “cool”—than its fictional counterparts.

If we dig into some of the latest research, though, we find the exact opposite of the disappointment we fear. T-rex was a terrifying animal, and if anything, Jurassic Park was low-balling it.

10 There Were No Booming Footfalls To Warn Of Its Approach 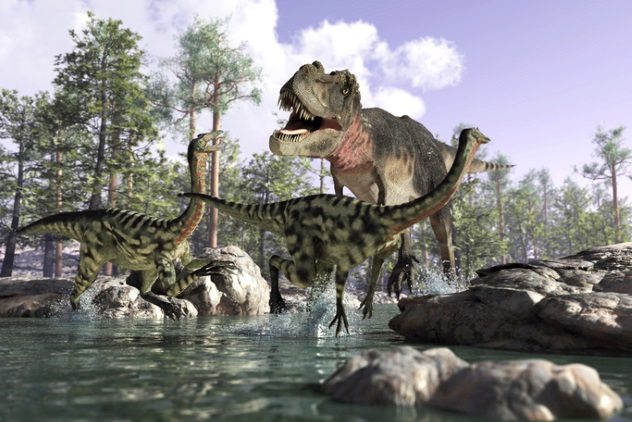 As dramatic as that scene in Jurassic Park is, a real T-rex wouldn’t make an Earth-shaking boom noise with every footfall. To the contrary, as famed paleontologist Robert Bakker (aka that awesome bearded guy from every dinosaur documentary ever) explained, dinosaurs’ feet were mostly soft on the underside.[1]

They didn’t stomp down; they stepped lightly with cushioned feet. Bakker compares this with the modern experience of African elephants walking through someone’s camp at night. If not for the footprints, no one would ever have known they were there.

Plus, it just makes sense: T-rex was a carnivore, after all. If it wanted to catch its prey, it wouldn’t do much good for it to stomp around sounding like a car with the bass cranked too high. It had to be sneaky if it wanted its supper, which dovetails nicely into our next point.


9 They Could Be Eerily Quiet When They Wanted To 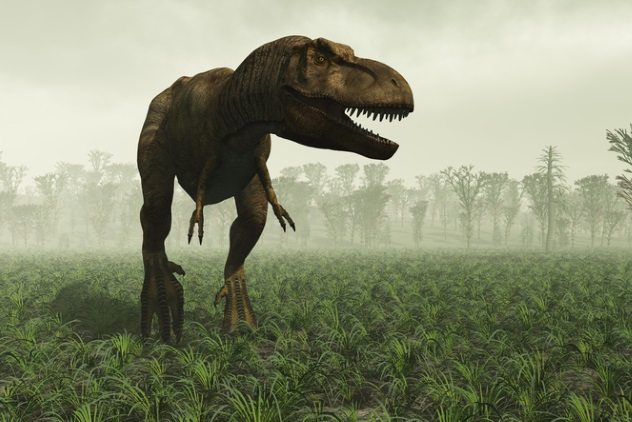 The echoing roar of the movies is pretty unlikely, as a study by paleontologist Julia Clarke revealed. Crocodiles, the closest living relatives of dinosaurs after birds, produce sound either through their larynx or not at all. The effect is more like a demonic burp than a lion’s roar. It’s possible the same could have been true with T-rex.

In her study, Clarke suggests most dinosaurs probably cooed, hissed, or bellowed with low-frequency noises. This noisemaking would likely have been limited to threat displays or mating calls, not hunting.[2]

The last thing a predator stalking prey wants to do is scare it away with excess noise. If a carnivore wants to eat, it has to know when to shut up, and T-rex would have been no different. The common “roar and then charge” scene in many a dinosaur documentary is thus debunked.

8 They Had Keen Eyesight 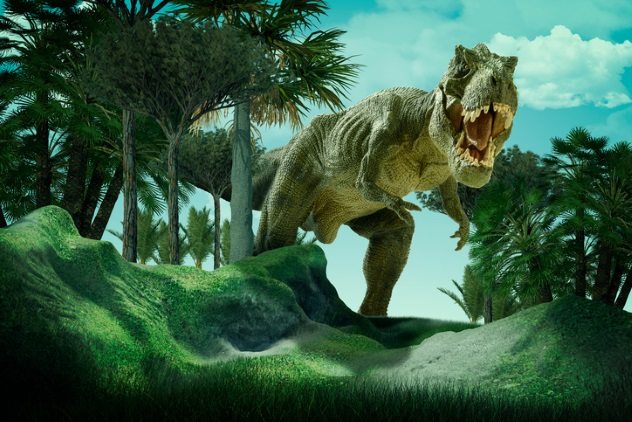 Contrary to what many of us heard growing up, the oft-repeated line from Jurassic Park about tyrannosaur vision being based on movement is complete fiction. Not only could T-rex see prey regardless of whether its quarry was holding still, but according to some scientists, T-rex could have had vision superior to many modern animals—humans included.

Based on this information, Stevens estimates that T-rex had visual acuity similar to that of a hawk’s. It could make out objects from up 6 kilometers (3.7 mi) away (much further than a human can), had better-than-average depth perception, and could most likely see in color. In other words, T-rex could see you before you saw it.

Its vision was far from the only sensory weapon in its arsenal, however.

7 They Had An Excellent Sense Of Smell 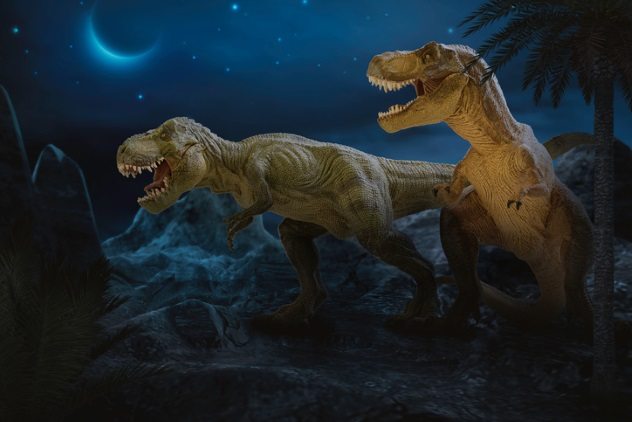 T-rex’s status as an opportunistic predator (meaning it ate pretty much any meat it could find, dead or alive) meant it had to rely on more than sight to find food. Luckily, its olfactory bulbs were grapefruit-sized, giving it a powerful sense of smell to help it track down carrion or prey animals, particularly at night.[4] What it couldn’t see, it could certainly sniff out.

It’s not hard to see why fiction has to cheat here. Jurassic Park would have been a much shorter movie if the T-rex’s sniffer was at full power. Even taking for granted the already debunked movement-based vision, the second the rex’s nose brushed up against Sam Neil’s hat, it would have been game over. 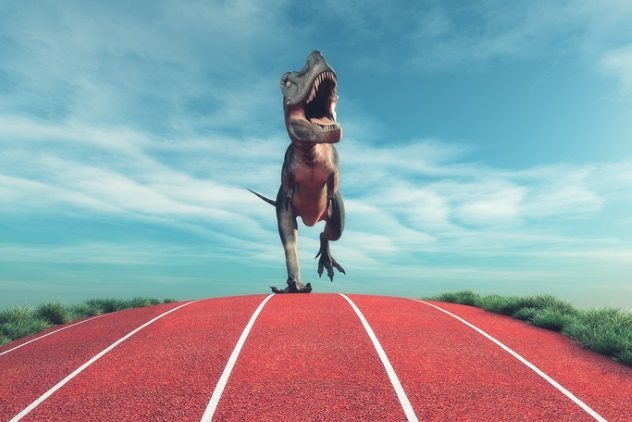 This is where we might be tempted to rest easy. Even if T-rex was as perceptive as the latest research suggests, surely an animal that size couldn’t move as quickly as pop culture would have us believe?

Admittedly, T-rex probably wasn’t the fastest dinosaur. Scientists have suggested a creature that size (the largest skeleton found thus far is 12 meters [40 ft] from head to tail) most likely couldn’t sprint at 51 kilometers per hour (32 mph) as it does in Jurassic Park. Conservative estimates suggest a max speed around 19 kilometers per hour (12 mph).[5] This doesn’t seem like much, but remember: It didn’t need to be the fastest; it only needed to be faster than whatever it was chasing.

Most humans can only get up to 24 or so kilometers per hour (15 mph), and since we’ve already established that this thing can sneak up on you . . .


5 Its Bite Force Was Unreal 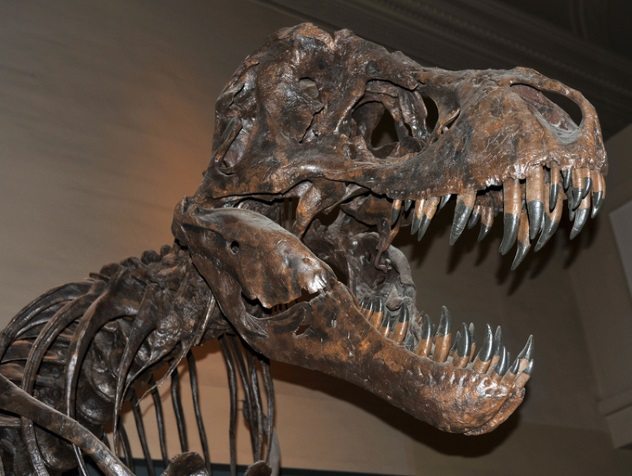 This animal’s bite force was so insanely, stupidly strong that it’s actually hard to put into words how powerful it was. It was so strong, in fact, that it turns out that scientists have been underselling it. As revealed when researchers used computer models to recalculate the probable biomechanics of its bite, T-rex’s jaws packed a monster of a punch.

It’s believed that the animal could snap its jaws (filled with banana-sized serrated teeth, let’s remember) shut with about 5,800 kilograms (12,800 lb) of force. That gives it the most powerful bite force of any land animal ever.[6]

Again, it’s understandable why this isn’t portrayed accurately in most movies. With a single bite obliterating anyone unlucky enough to be caught in the T-rex’s mouth, the bit from Jurassic Park where the T-rex eats the lawyer would have earned the film an R rating. No need to swing him around like a dog with a chew toy, either; a single chomp would more than do the job. 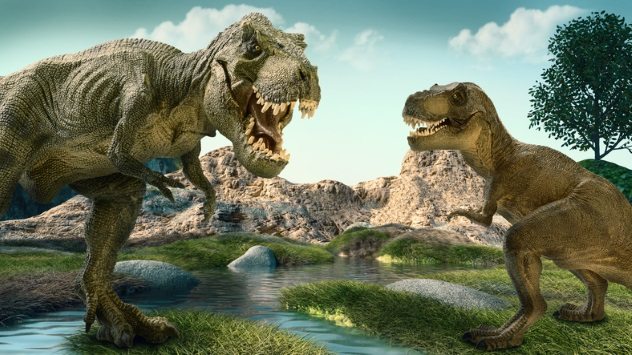 Fossilized footprints resembling T-rex have been found in groups of three, all going in the same direction.[7] According to a paper published by paleontologists on PLOS One, this suggests the animals might have occasionally hunted in groups of up to three individuals.

It’s unknown exactly why this behavior would have occurred, since T-rex has generally been considered a solitary animal, but one thing is clear: Even if a prey animal managed to escape a single T-rex, sometimes there could have been two more waiting to pounce just over the next hill.

3 Even Its Arms Were Nothing To Sneeze At 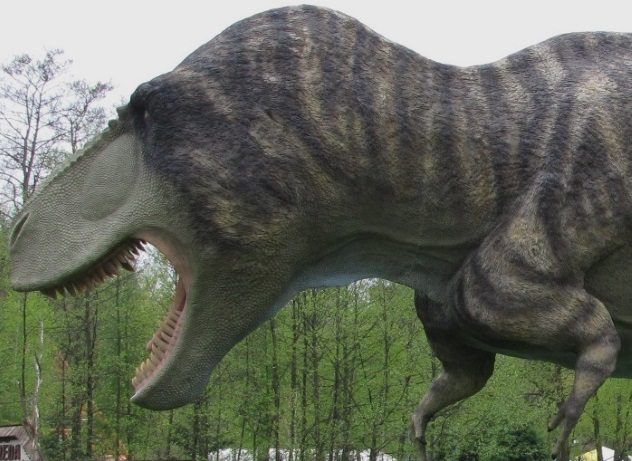 The tiny-armed T-rex is a joke told so often that even repeating it is tiresome, but the question remains: if T-rex was so fearsome, why did it have such wimpy arms? As it turns out, it didn’t.

Paleontologist Jack Conrad’s study of the muscle connection points on the often-mocked puny arms revealed that they packed a major punch for their size. How much? Conrad estimates the bicep alone could curl something to the tune of 195 kilograms (430 lb).[8] 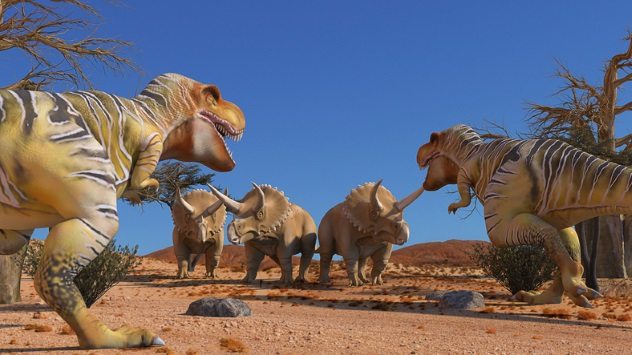 This one seems like it must be a joke; the very term “triceratops-tipping” conjures images of a group of drunken teenage tyrannosaurs hopping a fence and taking a running leap at a bunch of cows.

If a theory published in 2013 is correct, though, that might be more or less what happened.[9] T-rexes got the chance to use those small but powerful arms in their premier anti-triceratops strategy: ambushing the poor herbivores from the side, slamming into them, and using their suprisingly beefy arms to flip the hornheads on their sides.

That’s right: T-rex might have employed what was essentially cow-tipping in order to hunt. As a heavy quadruped, even the formidable triceratops would be up a creek in this position. Even if the fall didn’t injure it (and it likely would), the T-rex taking chunks out of its now exposed belly would be all she wrote.

It makes sense, despite how absurd it seems. Since we’ve already established that chasing prey down was rarely an option, and since attacking a trike’s horned face head-on was a risky proposition at best, ambushing them from the side and pushing them over could have been a viable hunting strategy.

It might be less epic than the titanic clashes that populate dinosaur picture books, but it certainly makes the T-rex seem more formidable.

1 They Changed Radically As They Grew 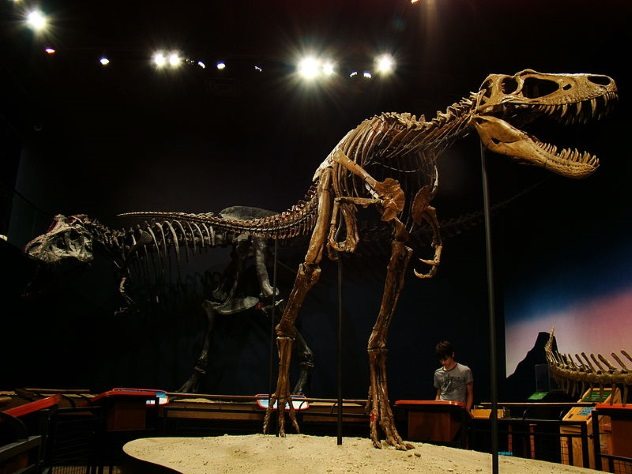 Baby dinosaurs are cute, as thousands of plushies will attest. It seems hard to imagine that an animal less than two years old could be a threat, but according to an analysis of dinosaur fossils by paleontologist Jack Horner, fossil specimens previously considered separate species may have been the same species at different stages of growth.[10]

If accurate, an animal called Nanotyrannus—previously thought to be a kind of pygmy T-rex—could actually be a juvenile of the larger Tyrannosaurs rex.

The picture this paints of T-rex is that of a dinosaur that changed radically as it grew. The younger animals would have been faster and more agile, able to chase down smaller (say, human-sized) prey that the adults would have had trouble catching. The adults, meanwhile, could stick to scavenging . . . or trike-tipping.

This one ruins the baby T-rex rescue from Lost World. Even with a broken leg, an infant T-rex would have no problem taking a chunk (or three) out of Vince Vaughn, and a belt around the mouth would have been unlikely to stop it.

So, in review: T-rex more than earned its fearsome reputation, feathers or not. It may not match all of our expectations, but in some cases, it outright shatters them.

I’m a freelance writer with a degree in Professional Writing from Kutztown University. I’m hoping to establish myself a little online, and I think top ten lists are a great way to do that.

Read more about Tyrannosaurus rex and other dinosaurs on 10 Fascinating New Things We Learned About Dinosaurs In 2017 and Top 10 Discoveries Changing T. Rex Forever.