Scarce finds add new words to the history books, and none are more visceral than death sites from the past. Most have faded enough to be overlooked by the casual passerby.

But sometimes, someone stumbles upon skeletons while experts head for known battlefields. Whether by accidental or on purpose, their musty depths hold treasures that do not sparkle—the true version of historic events, mysterious violence, and frontline fighting that is nothing short of ingenious. 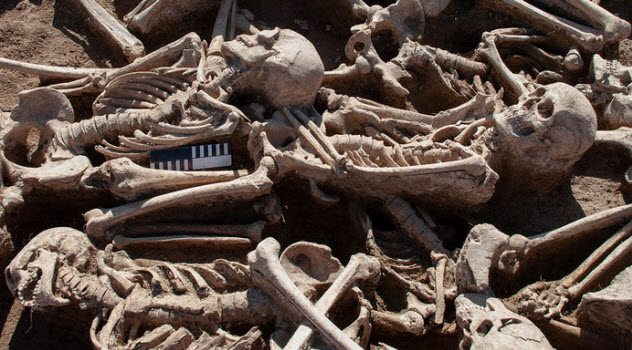 The hepatitis B virus (HBV) claims close to a million people each year. Two genetic research projects tackled HBV’s roots in 2018, and the result was surprising. This disease has been destroying livers for longer than anyone knew.

Previously, the oldest victim was a 16th-century Italian man whose mummified remains harbored a strain of HBV. In the new studies, that honor shifted to another man who died 4,500 years ago in Osterhofen, Germany. But that was not the end of HBV’s deadly reach back into human history.

Researchers also took samples from other ancient burials and mass graves throughout Eurasia. Among the 304 genomes sequenced, each representing a Bronze or Iron Age individual, a dozen had been infected with hepatitis B. None was as old as that of the Osterhofen male, but together, the 12 cases uncovered the pathogen’s true age.

How HBV changed to produce the modern versions of the disease revealed the time it took to evolve. This knowledge was then used in reverse. It showed that HBV has existed since the start of civilization, arising at the earliest around 13,600 BC.[1] 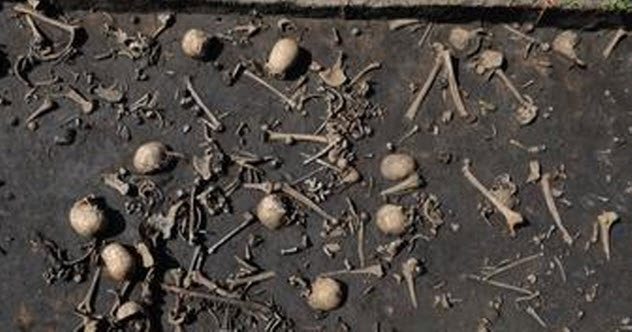 Known as Europe’s most ancient battlefield, Tollense Valley changed everything that scholars knew about Germany’s Bronze Age. Previously, the period was considered peaceful. But in the 1990s, the true horror of the valley’s past returned.

At first, only a few skeletons were found. Then hundreds dating back to 3,300 years ago were uncovered. They were all young men of fighting age—and they went down in battle.

It was disturbing enough to discover that Germany’s “Golden Age” was not so idyllic. Worse yet, the violence had been exceptional in scale and organization. It is estimated that thousands gathered to participate, and this required experienced leadership and soldiers.[2]

Since no historical accounts exist, nobody knows who these people were or why they fought each other so brutally. But unlike the benevolent society that researchers once thought existed, the real people had the power structures and greed to resort to organized violence to achieve their goals. 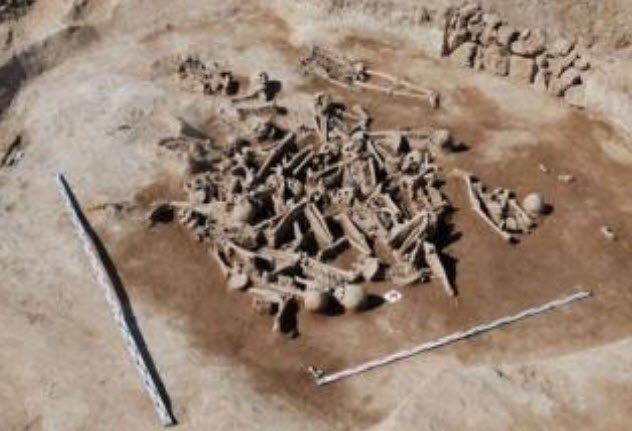 The Justinian plague rated among the deadliest in human memory. It arrived in AD 541, killed up to 25 million, and wrecked Constantinople. Historians blamed the outbreak on Egyptian rats that arrived with trade ships. But a recent analysis of 137 human skeletons from the Eurasian steppe shifted the plague’s origins to Asia.

The remains belonged to the nomads who would later become the Huns. They gave the Romans (and everyone else) a tough time. Two individuals carried a bacterium related to the Justinian plague. One, in particular, revealed that the strain was an older version. The person died around AD 200, several centuries before millions of people would die in Europe.

The nomads migrated westward until the fourth century BC, when they found the Roman border and entered Europe. How the Justinian plague ultimately spread so successfully is a riddle, although the bacterium’s genes allowed fleas to be carriers.[3]

Another mystery is the source of the AD 200 individual’s infection. Some of these nomads were known to dump horse carcasses in enemy water sources. One theory suggests that this was how plague was spawned, but it remains unproven. 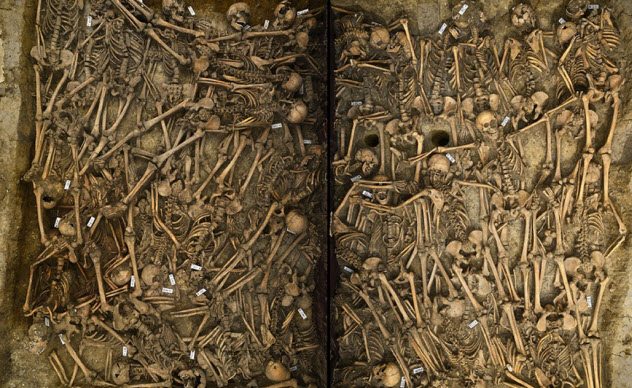 The Thirty Years’ War (1618–1648) broke out in Europe and, considering how much of the population died, it was worse than the Black Death and World War II. In 1632, Sweden and the Holy Roman Empire clashed near the German village of Lutzen. The townspeople buried 9,000 soldiers afterward.

In recent years, bioarchaeologists examined skeletons from one such mass grave. Before they entered the Battle of Lutzen, many of the men were already injured, some quite badly. But what killed most of them was surprising.[4]

At the time, bladed weapons were preferred. But over half of the 47 soldiers suffered wounds from gunfire, most of them head shots. Analysis of the bullets identified pistols, muskets, and carbines, all firearms carried by mounted soldiers. The discovery could be the first evidence of a story claiming that a Swedish unit called the Blue Brigade was slaughtered by cavalrymen near the site of the grave. When General George Custer and the 7th Cavalry suffered a spectacular defeat at Little Bighorn, the soldiers did not fancy being captured by Native American warriors. Historical accounts said that most men chose to kill themselves with a shot to the head rather than be tortured and scalped. This was backed up by 14 testimonies written by individuals on both sides who served on nearby units.

However, an additional 16 reports mentioned nothing about the rampant suicides that followed. The Battle of the Little Bighorn, which was fought in 1876, killed 268 soldiers of the US Army. In 2018, researchers studied data on those who survived the battle but not the aftermath.

A group of 31 were chosen for a preliminary look into the suicide claim, and the findings were interesting. Only three of the soldiers had shot themselves. The remains of 22 others showed why. The latter had been mutilated, dismembered, and scalped.[5]

Clearly, some of the men did kill themselves. However, it would appear as if the witnesses added a little too much emphasis on a grain of truth.

5 Why Gezer Was Destroyed 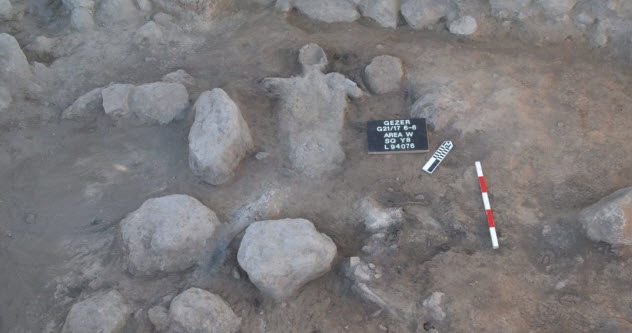 The city of Gezer was prized for its strategic location between Egypt and Mesopotamia. Though relations between Gezer and the pharaohs remained stable for years, something went wrong around 3,200 years ago. Several inscriptions describe how Pharaoh Merneptah “subdued” Gezer.

In 2017, archaeologists found that the truth was more brutal. Merneptah had burned the Canaanite city to a crisp. It was an unusual thing to do because Egyptians saw conquered cities as a way to increase taxes and rarely destroyed them.

Excavations unearthed two adults and a child, the first human remains to be found at Gezer. The manner of their deaths suggested a reason why Merneptah went too far. They died in a fire so hot that the building collapsed on top of them and wiped out any chance of determining age or gender. Evidence of a great blaze was also found in the city’s west where a huge layer of fire debris turned up.

Merneptah likely had no premeditated thoughts of ruining the precious city. The level of destruction, however, testifies to an ongoing resistance from the inhabitants and the increasing violence used to overcome them.[6] In 55 BC, two tribes arrived at the mouth of the Rhine river in what is now the Netherlands. They were the Tencteri and Usipetes. Their traditional home existed east of the river, but they had been chased out by the Germanic Suebi.

Perhaps because it was already winter and they needed a place of their own, they offered their military services to Julius Caesar in exchange for land. The two tribes needed asylum because the area was already being fought over by others.

Caesar offered them land. But since the territory already belonged to another tribe, the Tencteri and Usipetes asked to peacefully discuss the matter. For some reason, the Roman leader reacted badly. Caesar wrote in one of his books that he gave the order to have the two groups “violently” destroyed and that the Romans won the battle.[7]

In 2015, the battlefield was found where the Waal and Meuse rivers merge. Weapons, human remains, and a helmet were recovered. In particular, one skull showed the lack of Roman mercy. A projectile had shattered the bone above a woman’s eye. Both tribes, consisting of 150,000 people, were killed. Archaeologists agree that what Caesar called a “battle” was in fact a genocide. In 1917, the Battle of Messines became another stalemate during a demoralizing time for the Allies. World War I was going nowhere either way. Then British Major General Charles Harington held a news conference and promised that they were about to “alter the geography.”

The next morning, starting at 3:10 AM, 19 enormous mines exploded underneath the German trenches. Detonating seconds apart, the result was one of the meanest blasts before nuclear weapons. Up to 10,000 German soldiers were buried alive or, as modern excavations discovered, blown to bits. They had been unaware that the British had tunneled for two years under their feet to plant tons of explosives.

Today, the Belgian town of Messines shows little sign of the Allied victory. But archaeologists have found the tragic fallout—from a harmonica that belonged to a music-loving German to trenches filled with crushed bones, live explosives, and shredded uniforms. A line can still be seen where the soil rained back after the explosion.

In 2008, an intact skeleton was identified as Alan Mather, an Australian killed when the Allies advanced on the shattered German line. He was buried in 2010 with military honors.[8]

2 Colonists Under A Wine Shop In 2017, a business owner was about to repair his wine shop that had been damaged by Hurricane Matthew. But first, he offered archaeologists a look under the floor, which stood on a joist system built in 1888. Additionally, the shop was in St. Augustine, America’s oldest city. Even so, no major finds were expected.

Then the excavation turned up seven skeletons, including three children. Preliminary analysis showed that one adult was a European woman and another was a man with African ancestry. Grave pottery placed the burials between 1572–1586, just a few years after St. Augustine was founded.

Amazingly, a dig that was supposed to turn up nothing brought archaeologists face-to-face with some of the first colonists in North America. They were likely interred in an indoor cemetery. During the early days in Florida, Catholics were buried under church floors. Indeed, the ruins of the first parish building stood nearby and probably included the area occupied by the wine shop at one time.[9] During World War I, a patch in Turkey became a constant battlefield for eight months. The Turks fought the Australia–New Zealand Army Corps (aka the Anzacs). The campaign was historically important because it influenced the modern development of all three countries involved.

Researchers wanted a better idea of what the men’s lives were like. In 2011, they launched one of the most detailed battlefield studies ever done.

They found that Turkish soldiers ate better and had more freshly prepared meals than the Anzacs, who got more dinners in tins. Around 200 artifacts and 16 graveyards turned up, but the trenches appeared to be the most amazing find.

Apart from many collapsed tunnels and dugouts, a maze of trenches ran about 5,720 meters (18,760 ft) long. The frontline networks were unusually dense and frighteningly close to the enemy. At places, they were a mere 9–18 meters (30–60 ft) apart. The frontline trenches were also permanently manned by soldiers who faced a constant exchange of explosives.

In the end, the Anzac unit evacuated. Though the Turks technically won, the battle ate their resources and killed 80,000, which caused their army to fold later during World War I.[10]