The Cretaceous Period, famously populated by Tyrannosaurus rex, started around 145.5 million years ago. Around 80 million years later, an asteroid hit the Earth. That was the end of the nonavian dinosaurs and the Cretaceous. 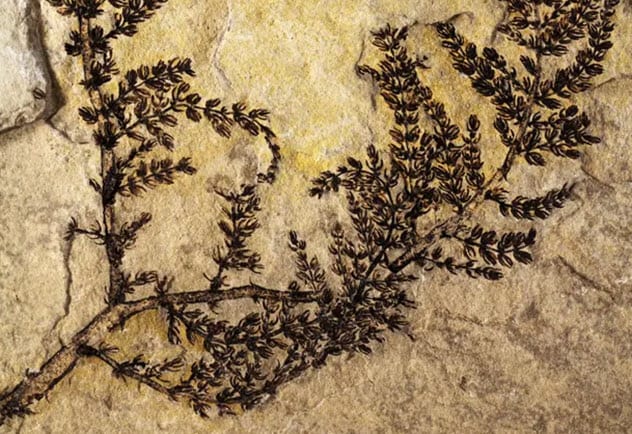 Archaefructus sinensis was proud of itself. At 125 million years old, the Chinese fossil was the oldest flowering plant ever found. In 2015, a new guy bumped it off the throne.

The Cretaceous bloomer appeared to lack roots and petals. There were leaves, however, either arranged in spirals or opposite one another. Minute flowers each held a single seed. Since animals did not yet disperse seeds, the pods probably floated in the water until they found and fertilized other plants.

If researchers can find out exactly how Montsechia vidalii managed to procreate, they could avoid a modern disaster. Important crop pollinators like bees are declining. If Cretaceous plants had another way to pollinate themselves without animals and insects, the ancient alternative could rescue food production.[1] 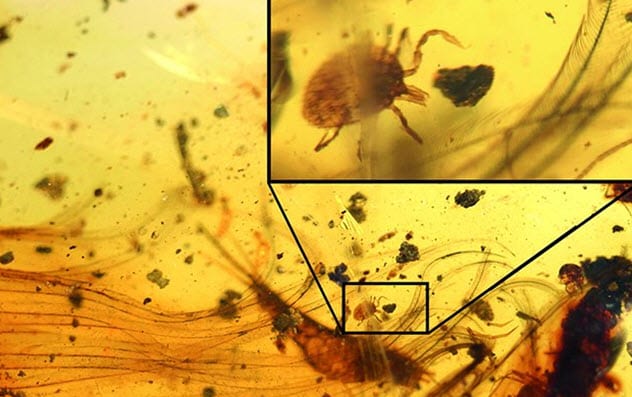 For decades, it was assumed that dinosaurs had parasites. In particular, researchers felt that ticks annoyed dinosaurs as much as they do people and animals today. In 2017, the first solid evidence appeared in amber. Fossilized within a 99-million-year-old piece was a tick grasping a feather.

It is a known fact that bloodsucking parasites such as ticks and mosquitoes lived during the dinosaur era. But never before had a tick been found with a trace of its host.

In this case, the feather did not belong to a bird. The amber was early Cretaceous, and true birds evolved later. The feather belonged to an unidentified species of fluffy dinosaur. A tick-infested fluffy dinosaur.

Scientists were on a roll when they discovered another block of amber with two ticks. Not only was it a new species but they were also blood-engorged. Although these ticks were not grasping pieces of a host, they were preserved with strands that looked like hair from dinosaur feathers.[2] 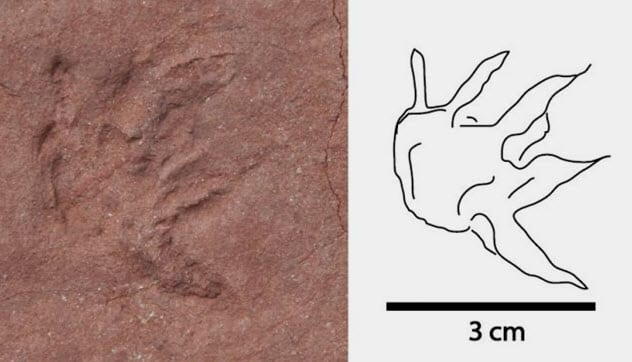 When geologist Vladimir Pervov found 69 fossil tracks, he was worried. The valuable prints winded over the property of a local mine. In fact, the Catoca diamond mine in Angola was the fourth-largest in the world.

Incredibly, Catoca agreed to stop all activity in the area. This was no small sacrifice—the mine lost income from that sector for more than a year. The 69 tracks expanded when the team found 18 other prints nearby. The tracks belonged to a crocodilian creature and sauropods, which were giant long-necked dinosaurs.[3]

The best discovery was a rare trail left by a mammal. Normally, mammals from the Early Cretaceous were no bigger than rats. This one was as big as a raccoon. The hefty guy’s feet and hands were adorned with five digits each. When it walked, the animal used the entire foot like a bear or human. The blunt tips lacked claws.

Unfortunately, nobody knows what the rest of the animal looked like. Most mammal fossils from the Cretaceous are teeth and ear bones. There are no skeletons available to compare to the Catoca tracks. 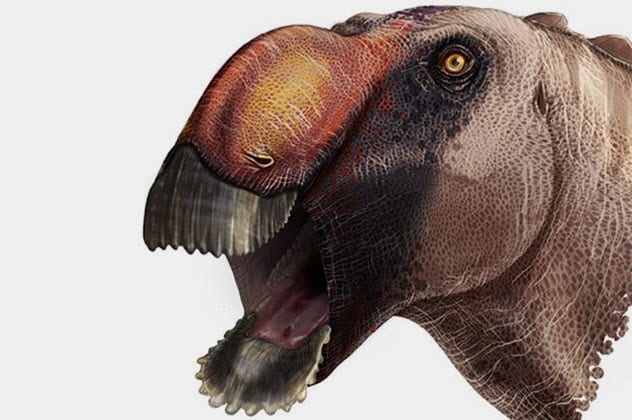 Dinosaurs are known for their otherworldly look. But a new species had such a weird face that researchers called it the “eagle-nose shovel-chin.” Its more polite name was Aquilarhinus palimentus.

Technically, the creature was a duck-billed dinosaur or hadrosaurid. It was also not entirely new. The fossil was unearthed in Texas during the 1980s and recently reexamined.

Aquilarhinus had an enormous hump for a nose. Besides the slight resemblance to an eagle, the hadrosaurid had jaws that looked like a pair of shovels with serrated edges.

The funny-looking creature turned out to be valuable. It was the most primitive duck-billed dinosaur ever found. When it lived around 80 million years ago, it was basically at the root of its family tree. This tree branched out into many species with wildly different nasal crests.[4]

Aquilarhinus‘s own nose was a simple bony fold, suggesting that the later complexity of hadrosaurus noses started out easy. Additionally, it placed the origins of duck-billed dinosaurs in North America. 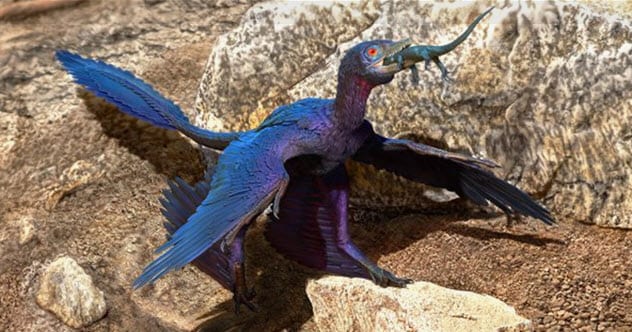 During the early Cretaceous, a dinosaur swallowed a lizard whole. Shortly after it ended the creature’s life, the dinosaur had its own life ended by something else. Together, they fossilized in northeastern China.

When archaeologists found the bones, they first identified the larger animal as a microraptor. Just like Tyrannosaurus rex, the microraptor walked on two legs but was a lot smaller.

At one point, while researchers analyzed the 120-million-year-old raptor’s stomach, the extra skeleton was discovered. The exciting find soon turned into a unique one when the lizard’s remains were recognized as a new species.

While the newly named Indrasaurus wangi revealed more about what microraptors consumed, its own strange teeth also suggested that it ate differently than other closely related lizards.

The pair was not the first meal-in-a-dinosaur to be found in northeastern China. Together with similar fossils, the raptor and lizard added more to researchers’ growing understanding of what the region’s extinct Cretaceous food chain looked like.[5] 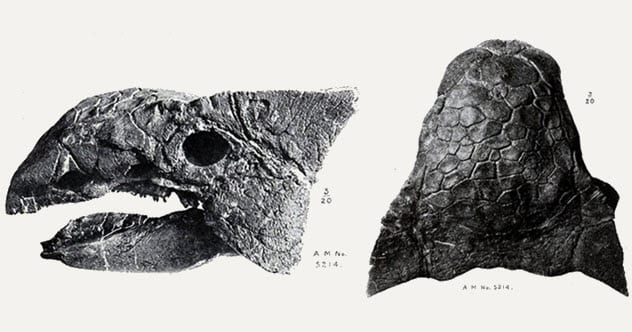 Ankylosaurus was a tanklike dinosaur. Roughly the size of a rhino, it was impressively armored with shoulder spikes and back plates. One thing spoiled its battle image—an undersized head. To find out why, researchers scanned Ankylosaurus heads.

Instead of finding the answer, the 2018 study encountered a strange sight. The skulls had long airways, and they were as loopy as party straws. A head full of twisted passages turned out to be lifesaving.

With their bulk, armored dinosaurs accumulated more body heat than most dinosaurs and risked heat exhaustion. Worse, their mysteriously tiny heads could rapidly toast in the sun and lead to brain damage.

A computer digitally tested the passages and blood vessels of the ankylosaurian skull and discovered its genius. To negate the effects of the heat, the passageways turned inhaled air the same temperature as the animal’s body and cooled the blood near the airway. The blood vessels also chilled blood heading toward the brain.[6] 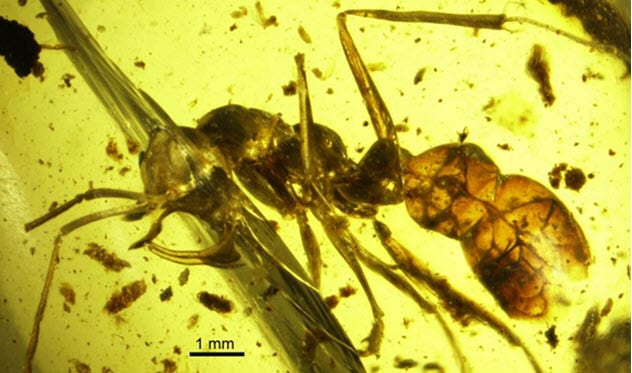 The Cretaceous had things called hell ants. Curiously, they were not related to modern ants. By the time the ancestor of living ants appeared, this group was already extinct.

In 2017, a new species of hell ant was found in amber. The 98-million-year-old insect revealed creepy details that led some to call it a “vampire.” Indeed, Linguamyrmex vladi had enormous mandibles that pointed upward like scythes.

The fearsome mandibles likely enabled the ant to clasp a victim before sucking out its juices. The jaws were not chew friendly, which reinforced the vampire theory—as did a tube between the mandibles.[7]

The jaws also had threads resembling the trigger hairs found in living trap-jaw ants. If anything brushes against the hairs, the ant’s mouth slams shut. Best of all, L. vladi had a metal spike on its head. Somehow, the insect took trace metals from its diet and reinforced the horn. Its purpose remains unclear, but it could have been used to subdue prey.

3 Malaria Began In The Cretaceous 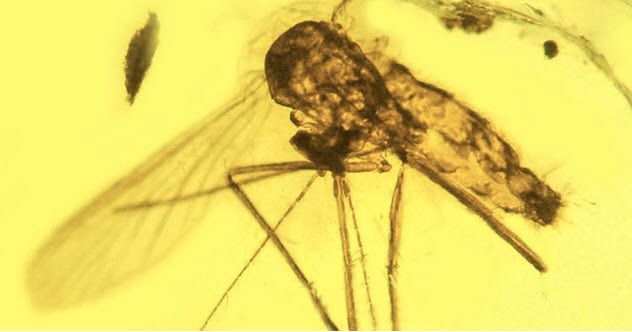 Millions of people develop malaria each year. Hundreds of thousands die. Scholars have debated the age of malaria, but recently, fossil evidence placed the parasite responsible in the Cretaceous.

Modern malaria, which is carried by female Anopheles mosquitoes, is around 20 million years old. Older versions of the disease used biting midges as vectors. A female midge trapped in amber alongside the malarial parasite Paleohaemoproteus burmacis pushed the scourge back to around 100 million years ago.

It could be older as biting midges themselves left fossils as far back as 140 million years ago. Since dinosaurs were among the first victimized vertebrates, there is a chance that malaria contributed to their extinction woes.[8]

The asteroid blamed for killing the dinosaurs did not act alone. For millennia before and since, other disasters thinned species out. Emerging pathogens and diseases of the time, like malaria, probably also took a swipe at the dinosaurs. 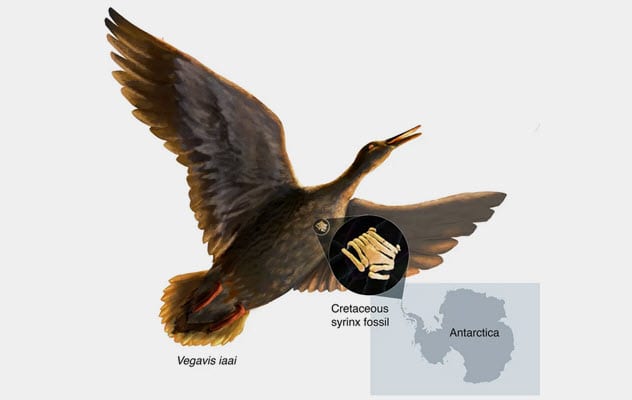 The human voice box, or larynx, is located in the throat. The larynx of a bird, called the syrinx, nestles near the heart. Little is known about the evolution of the syrinx. In 1992, Vega Island in the Antarctic offered a good clue. A fossil bird was found and subsequently named Vegavis iaai.

In 2005, the species was classed within the duck and goose family. This was a critical find. The 66-million-year-old creature became the first confirmed modern bird to have lived with dinosaurs.

The fossil was yet to give away its biggest prize. When the bones were X-rayed for a new study in 2016, the team identified a functioning syrinx. Not only was it the oldest ever found, but after comparing it with the voice boxes of 12 living bird species, it also became clear that V. iaai honked and quacked like a duck.[9]

The case was made that birds’ syrinxes were present at the end of the Cretaceous. However, there was nothing similar in older fossils. This suggested that the ability to sing arrived later in avian evolution—long after flight and specialized breathing became established traits.

Around 68 million years ago, there was a sea in South Dakota. The sea vanished, and some of its inhabitants became encased in shale deposits. During the 1970s, a professor gathered fossil crabs from the shale. The collection of crustaceans now belongs to the South Dakota School of Mines and Technology.

Recently, a student wanted to study population dynamics. It required a sturdy population of a single species, and the crab hoard was perfect. They were all Dakoticancer overanus and numbered 2,500.

The study encountered a mystery that remains unsolved to this day. Some of the crabs had mixed-gender traits. Females had broad abdomens and released eggs from holes located in their third set of legs. Males had narrow stomachs and sperm openings on their fifth legs.

The affected crabs had male abdomens and female gaps on the third legs. A few had nonsensical holes on their fourth legs. A parasitic barnacle interferes with the hormones in modern male crabs, making them look like females. But no barnacles were found on any of the Dakoticancer fossils.[10]

Read about more rare but cool scientific finds on Top 10 Rare Finds That Raised The Cool Factor In Science and 10 Rare Finds Proving The Ocean Is A Weird Place.