Many of us grew up loving ducks. We would chase around ducklings or coo over how cute they were. With their silly-sounding quacks and big paddle feet, ducks are generally regarded as adorable and funny birds. They bob around our lakes and rivers, minding their own business or eating our breadcrumbs. Donald Duck is a beloved character around the world, even though he doesn’t wear pants.

However, ducks are not as cute and innocent as they first seem. There’s a dark side to these animals that many people do not know about or even suspect. Ducks are sometimes cruel and violent. They have bizarre body parts and strange behaviors that you don’t often see in other animals.

For too long, ducks have been revered as harmless and silly. For too long, the public has been ignorant of the dark tendencies of our friendly neighborhood ducks. 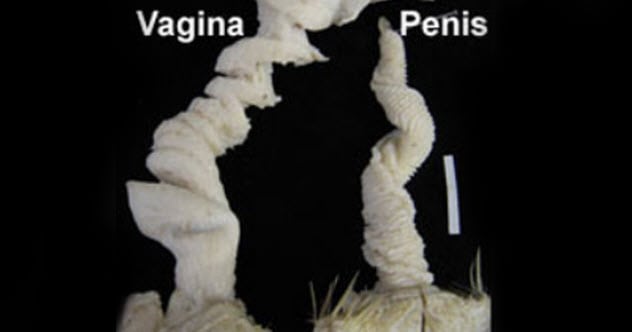 Did you know that duck penises are shaped like corkscrews? They are stored in sacs under their bodies, but when a duck penis is erect, it can become up to 20 centimeters (8 in) long. That’s about a quarter of the length of the animal’s entire body. To put that in perspective, that would be like a human having a forearm-sized member. To make this even more bizarre, it’s helpful to know that 97 percent of bird species don’t even have a penis.

To make things even worse, the penises of ducks are sharp and full of backward-pointing spikes. They are specifically made to stab into the female duck painfully. The spikes dig into the female duck’s vagina like a hundred sharp hooks to prevent escape.

Also, a difference between the penis of a mammal (such as a human) and a duck is that the duck everts his penis directly into the vagina instead of getting an erection before sex. The male duck just mounts the female and then stabs her in one motion, as though using a grappling hook.[1] 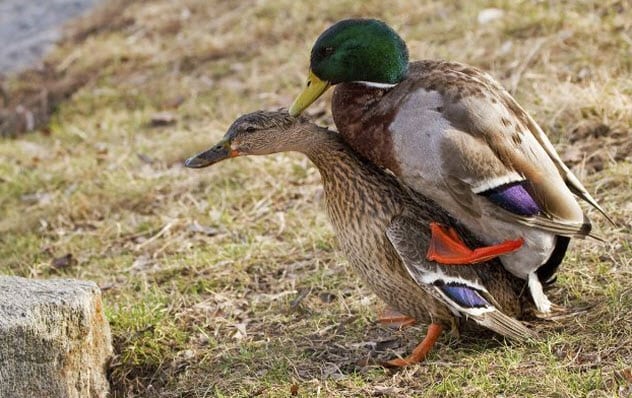 How have female ducks evolved to deal with the horrifying genitalia of their male counterparts? The females have counterclockwise vaginas to confuse and deflect the clockwise penises. They also have misleading tunnels that act as a barrier against full penetration.

Why? Dear God, why? Because ducks rape each other all the time.

Ducks also routinely engage in gang rape. Yep, gang rape. It’s not uncommon for three to six male ducks to chase and violently rape one female. On the other side of the spectrum, if a female duck is into the male duck “courting” her, she can relax certain muscles to make sure that the sperm of the favored male will fertilize her eggs.

Only about 3 percent of forced copulations end in ducklings, which makes us feel a little bit better. Still not great, though.

If you’ve ever lived by a lake or had a lot of contact with ducks, chances are that you’ve seen duck-on-duck violence. Even duck murder. The mating season for ducks is a brutal time, especially for females, as we previously discussed.[3]

But from time to time, ducks will actually drown one another while mating. Most females lose at least a few feathers on the backs of their heads and necks due to the males biting during the forced act, but some females will even lose eyes.

At times, humans also commit atrocities against ducks. A popular local Texas duck named George was brutally murdered in 2013, prompting The Humane Society and San Antonio Crime Stoppers to offer a large reward for the culprits.

George the duck was a very friendly fowl that used to pull on everyone’s pant legs. Often fed by local restaurants, he was a staple tourist attraction on the River Walk. Even with a reward of over $10,000, no suspects were ever captured. 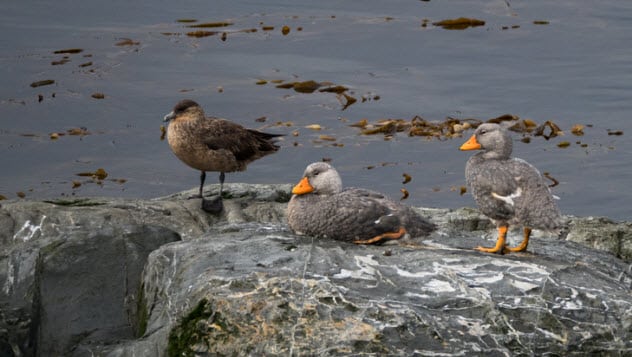 Poop is never a sanitary thing. Around most lakes and rivers, duck and goose poop accumulates and piles up like little stinky white hills. Ducks poop everywhere, and it’s no surprise that too much poop can cause health problems for us and other species as well.

The CDC warns that duck poop can carry diseases that are dangerous for humans, such as E.coli and Salmonella. Many people who handle their own pet ducks or geese will contract Salmonella infections every year. In 2016, there were a reported 895 cases from bird owners. Of course, many cases go unreported. A Salmonella infection is usually not life-threatening and just results in a lot of diarrhea and nausea.[4]

However, duck droppings can potentially carry up to 60 different diseases, some which are very harmful and dangerous for humans. Histoplasmosis is a respiratory disease spread by a fungus that grows over dried duck droppings, and it can be fatal. To be honest, it’s best to just stay away from any kind of poop. But duck droppings seem to be everywhere. So watch out, they could kill you.

6 The Hard Life Of A Duckling 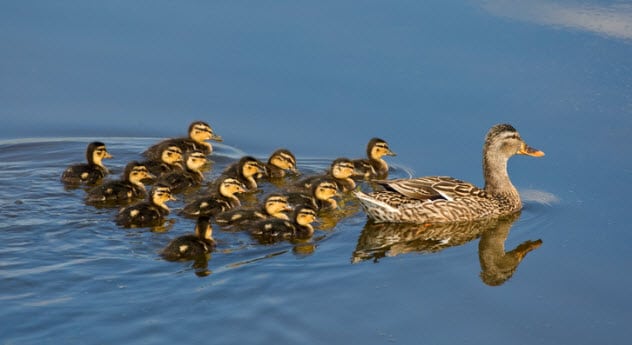 Many ducklings, those cute little cheepers that follow their mothers around the pond, won’t make it to adulthood. The survival rate is awful: Only about 60 percent grow into fully independent ducks.

Various things impact a duckling’s chance at survival. For example, bad weather. Hail has been known to kill a record number of the little guys. However, habitat is the number one influence on survival rate. A good habitat that protects the duck family from bad weather and predators is essential. But with humans building an increasing number of cities and man-made ponds, good habitats are hard to come by.

A duckling is also the perfect prey for a whole host of other animals. Even fish can swim up to the surface and gulp them down. A big enough bullfrog will eat a duckling, too.[5]

Hawks, foxes, snakes, and turtles will gladly snatch up a duckling snack. These baby birds are almost helpless until they finally reach maturity at 50–70 days of age, when they can finally fly. But they can never fly away from the evil that lives within themselves. 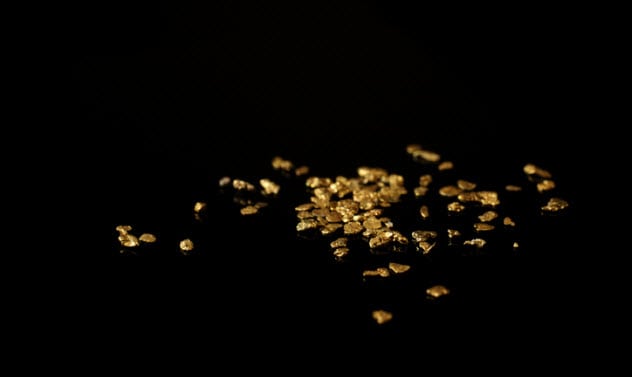 Imagine walking around a beach, picking up the sharpest rocks that you can find, and then popping them into your mouth. You swallow the sharp rocks, and they go into your tiny, second stomach. This is called a gizzard. Most birds have them.

Why do ducks swallow sharp rocks and pebbles? To grind up the bones of the fish that they swallow whole. That’s right, they make their own set of teeth DIY-style. This is called a gastrolith.[6]

Once the rocks are not sharp anymore, ducks will vomit them back up and look for new rocks. This means that you can potentially pick up a nice, rounded stone that has been in a duck’s gizzard.

Sometimes, ducks will swallow more than just regular rocks. There are plenty of examples of miners finding actual gold in the gizzards of ducks and other birds. The miners simply followed the ducks to where they had been scratching around in the earth and found profitable veins of gold. Other intrepid people in the gold rush era would even pick through bird droppings trying to find gold. 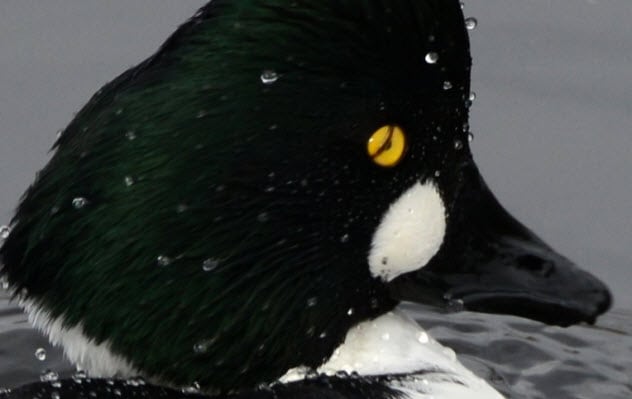 Did you know that ducks have better vision than dogs? Ducks can see in full color, and due to the sideways placement of the eyes on their heads, they have a nearly 360-degree view of the world around them.

Ducks have two to three times better vision than humans. Although these animals have poor night vision, a duck’s eye contains cones that we do not have. This allows them to see ultraviolet light.

They also have a freaky third eyelid. However, that’s not necessarily odd. All birds have three eyelids. These “nictitating membranes” are used like underwater goggles to improve the duck’s vision while diving.[7] A ton of other animals sport this handy eyelid feature as well. If you look closely enough, you can see them on a dog, too. 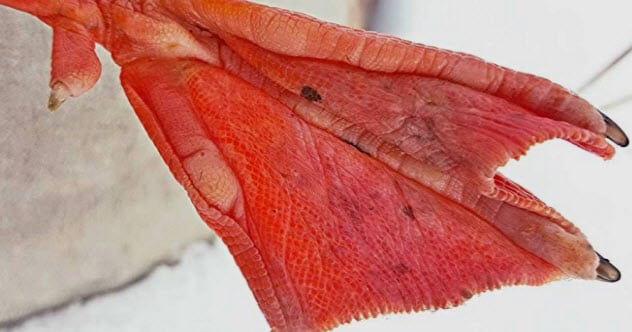 Ducks are like weird, bionic, terminator birds. They have developed very specific body anatomy to deal with cold winter lakes and their chilly watery lifestyle.

We all know that ducks have webbed feet, but did you know that a duck can restrict blood flow to his feet? As the temperature drops, less blood will flow to a duck’s extremities. This is how a duck can swim in frigid water and stand comfortably on ice.

Duck feet will also change color during the mating season. Much like a red baboon butt, a duck’s foot will swell and turn a bright red when they are beginning to pair off. Both male and female feet will be red until the summer, when they turn a drab color again to blend into their surroundings.[8] 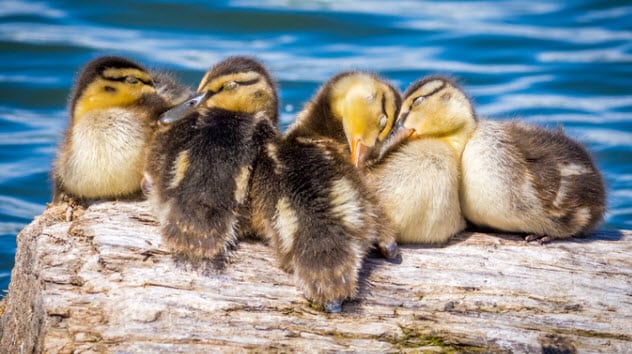 You can never surprise a duck. They are always watching, always waiting. It’s terrifying. It’s hard for predators to sneak up on an adult duck, and hunters will tell you that it’s necessary to remain completely still and totally camouflaged while waiting to shoot.

Ducks are proven to sleep with one eye open. When sleeping in a group, ducks will almost always sleep in a line. The duck at the end of the line will keep one eye open to watch for predators.

A study in 1999 revealed something very interesting about ducks’ sleeping habits. While one eye is open, only half of the duck’s brain is asleep while the other half is awake. They can shut off half their brain.[9] 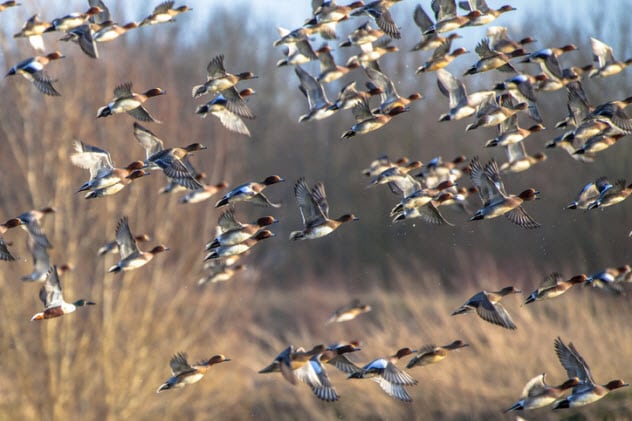 A grand passage sounds like something lofty and majestic, something a rich duck would do before diving into a pile of gold coins. It sounds nothing like a scene out of a horror movie. (Alfred Hitchcock’s The Birds? Apparently, things like that totally do happen.)

A grand passage occurs when an entire population of ducks goes crazy. It usually happens after weird weather patterns occur—sometimes, a massive cold front will cause millions of ducks to migrate at once. This phenomenon happens from time to time, but it is always jarring and frightening to the people on the ground underneath these gigantic clouds of ducks.

At times, they number so many that airports are choked with ducks and airplanes have to wait until the mass of birds moves on before they can resume service. The huge number of ducks can jam radar systems and black out the sky.[10]

A grand passage is a terrifying sight, but ducks will always pass right over us humans. We’re lucky that no death from duck has ever been reported. Yet.

I grew up by a lake in Minnesota, and the lake was named “Mallard Lake.” justinearindajohnson.weebly.com

For surprising stories about ducks and other birds, check out 10 Surprising Bird Mating Rituals and 10 People Killed By Animals You Wouldn’t Expect.