Species do not evolve in isolation. The web of life means that different species must adapt as they interact with each other. Between predator and prey, there might be an evolutionary arms race as each struggles to beat the other.

Although the interactions between two species can be far more interesting and involved, both species sometimes evolve together in ways that benefit each other. Here are 10 examples of animal and plant species locked in weird relationships.

It’s not a shock to find that the acacia ant has a close bond with the acacia tree. What is surprising is just how close their bond is. As they are so immobile, plants are always at risk of being eaten, which is something many organisms find unhelpful. To fend off herbivores, acacia trees have developed sharp thorns and a bitter taste. They have also enslaved whole species of ants to actively fight off their foes.

Acacia ants find acacia trees a welcoming home as the huge thorns can be hollowed out for the ants to live in. Many species of acacia will swell up around these hollow thorns to produce an even larger home for their resident army. To further attract ants to live there, the trees will produce a sweet nectar for adult ants to eat and protein-rich pods for ant larvae to consume.

With such a welcoming place to live, it is no wonder the ants will protect their acacia tree. Up to 30,000 ants may live on a tree. They will hunt out and sting animals that eat their tree, cut up rival plants stealing sunlight, and scrub off fungal pathogens.

The acacia takes no chances that its captive bodyguards might wander away. In its nectar, it adds an enzyme that prevents the ants from eating any other form of sugar. Any ant that tries to leave its acacia tree will soon starve to death.[1]

Acacia trees are not the only plants that have evolved to work closely with ants. Although the acacia ant took its name from the tree in which it lives, the ant plant (Myrmecodia) takes its name from the ants that live in symbiosis with it.

The ant plant of Australia is somewhat unusual anyway in that it lives on other plants. Epiphytes, as such plants are called, land on trees as seeds and grow high above the ground. This offers some protection from things trying to eat them, but the ant plants have an extra layer of defense.

Chambers form in their swollen lower stems that are the perfect homes for ants. The ants do not create these homes; rather, the plant has evolved specifically to produce them. These stinging ants will swarm anything that disturbs their homes.

This is very similar to the acacia ant, but the ant plant benefits from its ants in another way. Nitrogen is one of the main nutrients that plants take from soil. As it grows far from the soil, the ant plant struggles to get enough nitrogen. The plant grows two sorts of chamber within itself—smooth ones where the ants live and rough ones where the ants deposit their waste.

The plant is able to harvest the nitrogen it needs for growth from the ant poop.[2]

Pitcher plants are carnivores that will digest the animals that fall into them. This is a response to the low-nitrogen environment in which they live. As the ant plant invites ants to live in it in order to get nitrogen, so the pitchers invite animals to die in them. However, one species of pitcher plant is a more inviting host.

Nepenthes hemsleyana is an unusually large pitcher plant that has evolved a relationship with a bat. By day, a Hardwicke’s woolly bat will climb inside the pitcher and rest. Instead of trying to digest the bat, the plant survives on the nutrients it can scavenge from the bat’s droppings.

This is not a passive relationship. The pitcher plants have evolved a way of attracting bats in the dense rain forest. The back wall of the plant is shaped like a dish and will reflect the echolocating bat’s calls. This allows the bat to detect a roosting spot easily.[3]

When we think of animals that pollinate plants, we most often think of bees and other insects which buzz from flower to flower spreading pollen. However, there are many species of plants which rely on mammals for reproduction.

To attract these mammals, plants must evolve quite different flowers than those which entice insects. The smells of mammal-pollinated flowers are not the delicate floral scents we usually think of. A mammal-attracting flower will often smell of cheese and yeast. These flowers are also more likely to point downward to scatter pollen on the mammals below as they try to feed from it.

It is not only herbivorous mammals that will be used as pollinators by plants. Sugarbushes attract carnivorous mongooses and genets. This benefits the plants because carnivores tend to have large territories and will spread the pollen further.[4]

Of course, not all insects are attracted to sweet foods. A flower attracts a certain type of insect by giving it what it wants. The Amorphophallus titanum has evolved to attract flies and carrion beetles, and so it produces a smell to lure them in. The perfume that the Amorphophallus titanum pumps into the jungle air has given the plant its alternative name—the corpse flower.

The flower of the Amorphophallus titanum is the largest on Earth. This is partly a response to its environment. In the lush jungles of Sumatra, a plant must produce a lot of its scent to have a chance of spreading it far enough to attract insects.

The huge structure of the flower also produces its own heat. This increases the reach of its rotting flesh aroma and makes it easier for flies to find the plant. Fortunately for those not fond of flowers that reek of decomposing bodies, the Amorphophallus titanum only blooms approximately once every six years.[5]

The Amazon rain forest is famous for its biodiversity. Huge numbers of species of plants and animals live together in one of the richest ecosystems on the planet. And yet there are patches of the rain forest that seem to consist only of a single species of tree—the Duroia hirsuta.

The native peoples of the Amazon thought that these patches were created by evil demons, and so these areas were called Devil’s gardens. The Duroia hirsuta produces chemicals which inhibit the growth of other plants, but this is not enough to explain their dominance.

In fact, the demons which create these areas are an ant species. As we have seen with other ant–plant relationships, the ants will act as an army to defend their home.

Instead of just targeting other animals, the lemon ants that live on these trees will search the jungle floor for seedlings of other plants and poison them with their formic acid. This prevents other plants from stealing the light needed by the Duroia hirsuta.

In turn, this increases the size of the ants’ home. An ant colony in a Devil’s garden can grow to house thousands of queens and millions of ants.[6]

It is perhaps no surprise to find that fig wasps live in fig trees. The fact that many figs contain the corpses of dead wasps may put you off eating them, though. The relationship between figs and fig wasps goes back at least 60 million years, so it is humans eating figs who are really intruding on a private affair.

The fig is not really a fruit but a hollow structure containing many flowers. As a fig develops, it produces a scent which attracts pregnant female fig wasps. To get inside the fig, the female must burrow in. This is a tough process which often tears off her wings and antennae.

Once inside, the wasp will deposit her eggs and the pollen she has carried from her home fig. Then she dies. If not pollinated, the fig will often wither and die, killing any eggs inside it. This is an evolutionary safeguard to ensure that wasps continue to bring it pollen.

If pollinated, the fig ripens, the wasp eggs hatch, and they feed on the flesh of the fig. Males and females will grow inside. The males gather pollen for the females and tunnel a hole out of the fig. Then they mate with the females and deliver their pollen before the female wasps escape to search out new figs—and the cycle continues.[7]

Humans have a bit of a track record with driving species to extinction. Seeing the close relationship between species on this list, it is not hard to see how wiping out one species can harm other species. In the case of the giant ground sloths of South America, humans very nearly ended up destroying the avocado.

Seeds carried by animals tend to be sized appropriately to the creatures which carry them. The avocado’s huge seed required a suitably large animal to move it about. The giant ground sloths could grow to be up to 6 meters (20 ft) in length. Being big and hungry, they would eat avocados and then spread the avocado seeds through their bowel movements.

With the coming of humans to the Americas, many large mammals, including the giant ground sloths, were eradicated. Without the sloths to spread the avocado seeds, the plants had no way to colonize new areas, putting them at risk of following their sloths to extinction.[8]

Thanks to humans cultivating avocados, the plant has survived and humans have stepped into the role of the sloth. 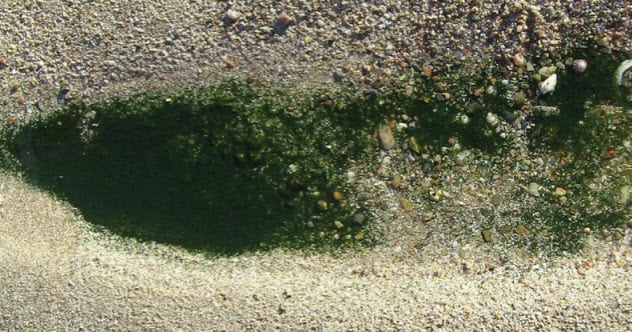 It is not so unusual for animals to live in plants. However, Symsagittifera roscoffensis is a worm that has evolved to have plants living in it. These mint-sauce worms never eat and instead get all their energy via the algae that live inside them.

The worms have no guts. So when they absorb the algae as juveniles, the algae are not digested. Instead, the tiny plants receive a safer home than they could expect floating free in the ocean. In return, they give the worms energy.

The worms live on beaches. When the tide is out, they rise to the surface to expose their symbiotic algae to sunlight. When the tide comes in, the worms retreat under the sand for safety. Whether the algae or the worms benefit more from this relationship is open to question, but many see mint-sauce worms as a true animal–plant partnership.[9]

1 Plants That Call To Predators 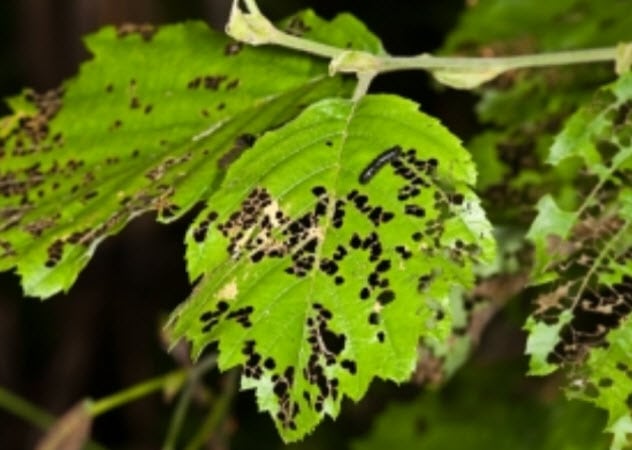 We have seen plants that provide a home to insects to protect themselves from herbivores, but perhaps that relationship is a bit clingy. Some plants wait until they are under attack to call in animal helpers.

For example, when a tobacco plant is damaged by a caterpillar munching on its leaves, the plant releases volatile organic chemicals. These chemicals rapidly spread through the air.

The caterpillar may not notice this silent scream, but predatory insects do. They will descend on the caterpillar that is causing the damage and eat it. The plant benefits, the predators benefit, the caterpillar . . . not so much.

Perhaps the most vicious response to attack is one used by maize plants, among others. When under siege by caterpillars, these plants release a signal which attracts parasitic wasps. The wasps fall on the caterpillar, lay their eggs in it, and wait for the caterpillar to be eaten alive from the inside out.[10]

Ben is a freelance writer, whose musings and ramblings can be followed on Twitter.