Although Dunkleosteus is one of the most terrifying fish ever to have roamed the Earth’s oceans, few people know much about this prehistoric creature. Having lived 360 million years ago, Dunkleosteus was one of the largest-known fish from the Arthrodira order and one of the final species of this kind.

However, truly horrifying fossils of this awesome predator survive to this day to remind us that prehistoric often meant supersized. So, exactly what was Dunkleosteus, and how did it earn its reputation as one of the most fearsome aquatic carnivores ever to have lived?

Here’s our roundup of the 10 things you probably never knew about this apex predator.

10 Dunkleosteus Crushed Its Prey With Its Own Skull 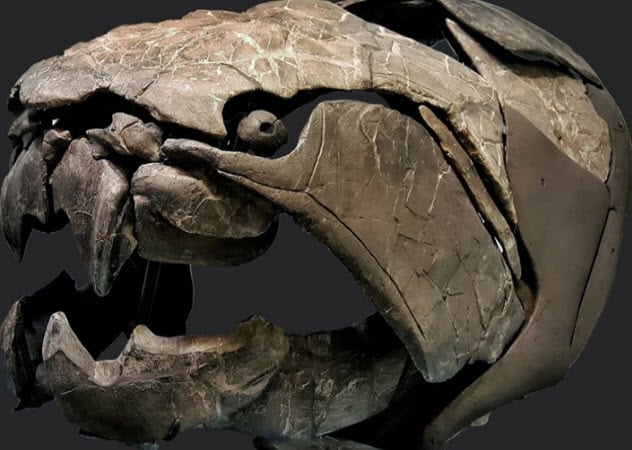 Despite being a fearsome predator, Dunkleosteus didn’t have a single tooth in its head. Instead, its entire skull was covered with bony plates that acted as armor and formed two long “fangs”—one each on the top and bottom jaw. These behaved much like teeth and delivered a devastating bite force.

As if that wasn’t alarming enough, the fangs of Dunkleosteus actually increased in size as the creature aged. Scientists believe that this is because the diet of this killer fish changed as it got older.

While the younger animals were busy eating soft prey, the older ones were capable of crunching down on other armored sea creatures. Interestingly, the same kind of change in diet is seen in today’s great white sharks, with adults graduating from fish to large sea mammals.[1]

9 Its Fangs Were Self-Sharpening 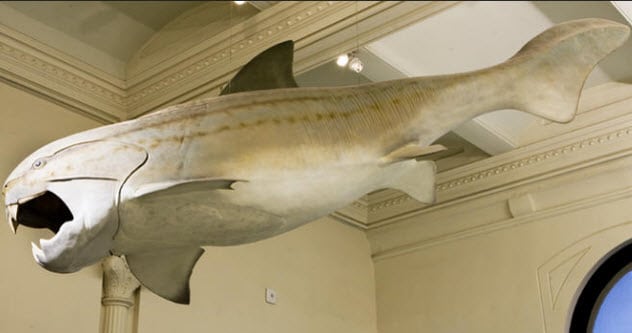 If you’ve ever sharpened an axe or hunting knife, then you’ve already got a good idea of how Dunkleosteus managed to sharpen its own teeth. As it opened and shut its jaws, the edges of its fangs rubbed together, creating friction. Over time, this kept them perfectly sharpened into razor-edged weapons that could do serious damage even to other massive prehistoric sea animals.[2]

Unfortunately for Dunkleosteus‘s prey, breaking a fang wouldn’t put this predator out of action. When a fang was ground down, the bone would simply grow back. In fact, their self-sharpening fangs could be regrown indefinitely.

8 It Had A Lethal Bite Force 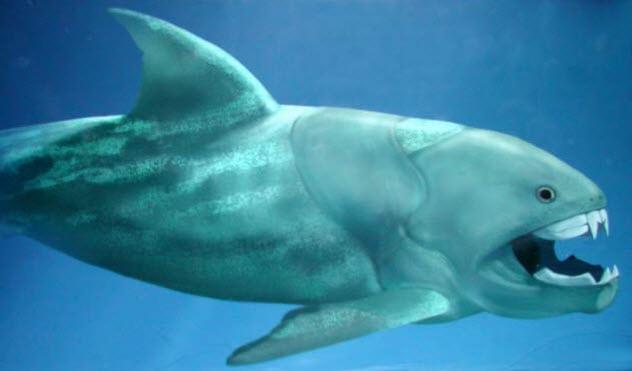 Recently, scientists at the Field Museum in Chicago were able to virtually recreate the bite force of Dunkleosteus by using surviving skull fossils. What they found was truly astonishing. The jaws were able to snap shut with about 8000 pounds of bite force per square inch. [3]

For perspective, that puts the creature’s bite force on a par with that of the infamous T. rex. In more modern terms, a Dunkleosteus fang could exert over double that of a crocodile, which delivers a relatively measly 3,700 pounds per square inch. In fact, even the great white sharks of today are only capable of inflicting around half the force of a Dunkleosteus bite.

7 It Could Suck Its Prey Into Its Mouth 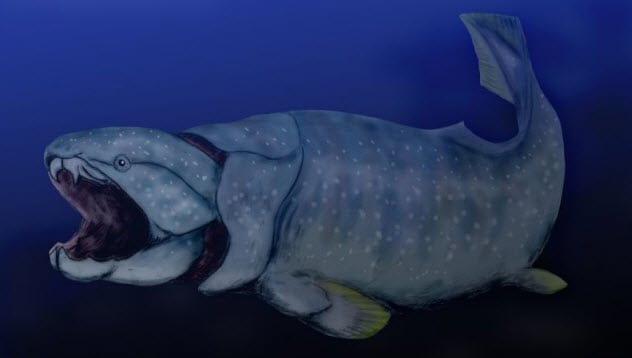 Not only could Dunkleosteus chomp down on its prey at double the force of a great white shark, this monstrous creature was also capable of sucking its prey directly into its gaping maw. This extraordinary ability is all down to the truly incredible speed at which it was capable of opening its mouth.

In fact, it could completely open its jaws in an astonishing 1/50th of a second. This served to create a vacuum so powerful that anything unlucky enough to be close by would be sucked inside.

This makes Dunkleosteus fairly unusual as it’s quite uncommon for a fish to be able to bite down both hard and fast. Although Dunkleosteus was a slow swimmer, all it had to do was get close enough to its prey to suck it inside.[4]

6 Dunkleosteus Would Eat Just About Anything 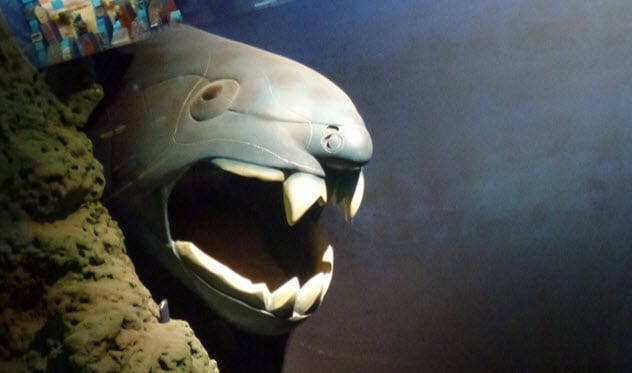 When you’re as fearsome a predator as Dunkleosteus, you can just about take your pick when it comes to prey. When it was time to dine, Dunkleosteus wasn’t choosy. Its powerful bite allowed it to devour other armored sea creatures, and it wasn’t averse to tentacled animals, either. In fact, its diet even included sharks.[5]

However, it’s worth bearing in mind that the sharks eaten by Dunkleosteus would have been significantly smaller than many of the species around today. That’s because large shark species didn’t evolve until after Dunkleosteus went extinct.

However, Mark Westneat, one of the leading authorities on this monstrous creature, said that Dunkleosteus would almost certainly win in a showdown with a great white.

5 Dunkleosteus May Have Been Cannibalistic 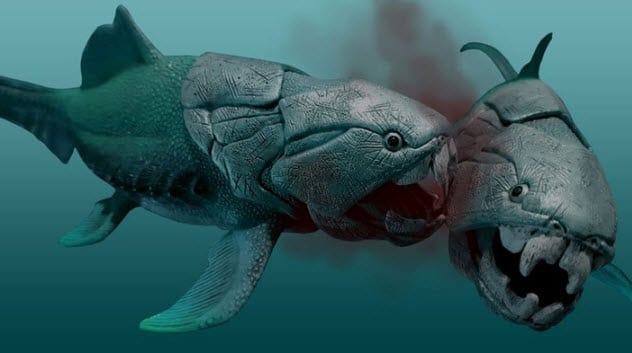 Although it’s hard to imagine, evidence shows that these terrifying creatures came to blows with each other. When scientists examined skull bones from Dunkleosteus fossils, they found huge scrapes and gashes gouged into the bone. The only sea creature capable of inflicting such wounds was a fellow Dunkleosteus. So ferocious were the attacks that some have even caused complete fractures in the bones.

Dunkleosteus was tactical in its attacks, aiming to inflict wounds on another of its kind at the weak points on the skull. However, it’s not clear if these were cannibalistic attacks. Although they may have been trying to eat each other, another theory is that these epic fights were to gain control of territory or other resources.[6]

4 It Was Built On A Truly Epic Scale 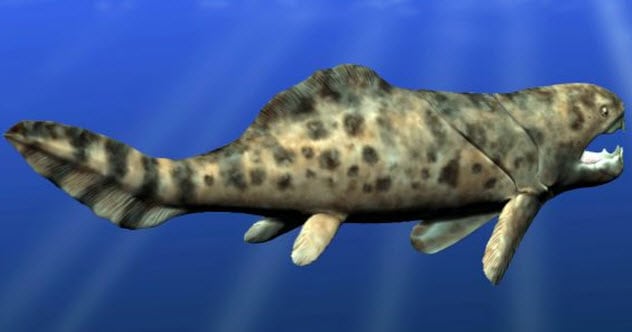 Dunkleosteus was a prehistoric animal of absolutely monstrous proportions. At its largest, it could reach around 9 meters (30 ft) long. To put that size in sobering perspective, the largest great white shark ever recorded was a relatively modest 6 meters (20 ft) from nose to tail.

Dunkleosteus was also a heavyweight. In fact, scientists estimate that a fully grown Dunkleosteus weighed more than 3 tons. That’s more than a killer whale. In fact, it’s around the same weight as an extremely large hippopotamus. So, there’s yet another reason why you wouldn’t want to come face-to-face with a Dunkleosteus.[7] 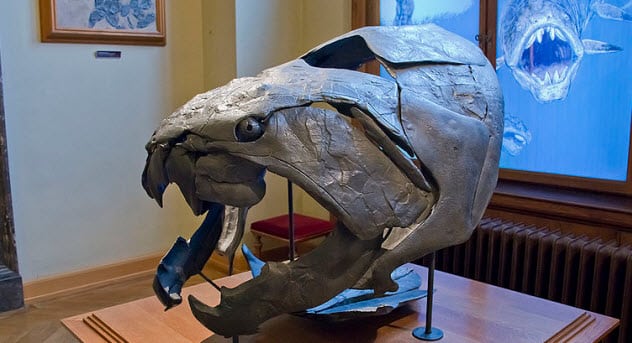 Once it had dispatched its unfortunate prey, Dunkleosteus would have set about chewing it up with its jaws. Scientists were able to conclude this because fish boluses have been frequently found alongside Dunkleosteus fossils. A fish bolus is made of food that has been chewed and then subsequently swallowed.[8]

However, these discoveries are so interesting because the bones from the prey have only been partly digested. That suggests that Dunkleosteus was chomping down on its prey and then spitting out the bones instead of passing the complete dinner through its digestive tract. Lovely.

2 Dunkleosteus Flourished The World Over 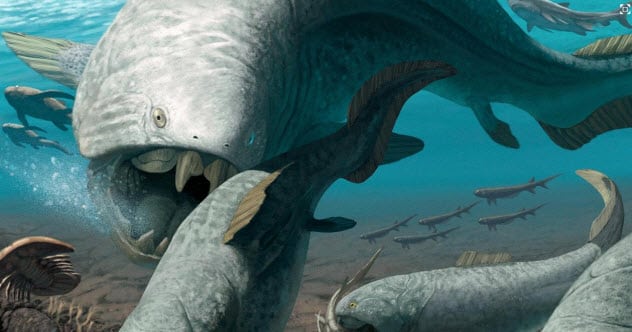 As we’ve already seen, Dunkleosteus was definitely a predator to avoid at all costs. However, this was probably easier said than done. It looks like Dunkleosteus was able to thrive almost anywhere, and it’s known that they populated the oceans worldwide.

In fact, Dunkleosteus remains have been found in Africa and Europe. They’ve also been found in New York and Missouri in the United States and even as far north as Canada. So, nowhere was safe from the tyranny of these apex predators.[9]

1 No One Knows Exactly Why They Died Out 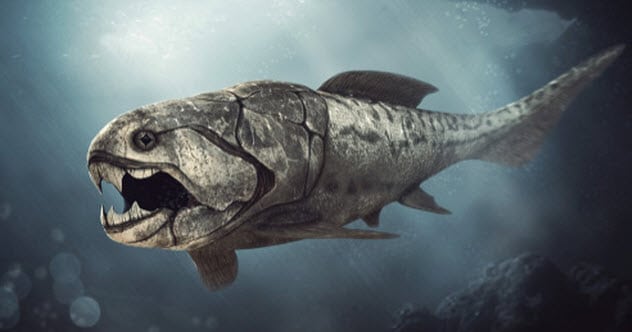 You’d think that a species of giant fish would stick around for a long time, but you’d be wrong. In fact, Dunkleosteus only existed on Earth for around 50 million years, a relatively short time in comparison to other species. But it’s not entirely clear why such a fearsome predator—one that had managed to flourish across the globe—went extinct.

The most likely theory is that Dunkleosteus was wiped out by a catastrophe called the “Hangenberg Event.” During this period, oxygen levels in the oceans dropped dramatically. Low oxygen levels are bad news for most species. But when you’re a 3-ton monster with a huge body, survival is highly unlikely.[10]