When it comes to food, what is a staple in one country may be considered bizarre in another. One country’s classic is another country’s exotic novelty treat. One’s hot trend is another’s time-honored tradition.

For example, American classics like peanut butter and root beer are considered odd and even disgusting outside the US. On the other hand, ice cream is one food that seems to enjoy worldwide popularity. Yet, so endless are its variations that there is always some new ingredient or flavor to discover.

Internet lists abound featuring weird, attention-grabbing, and faddish ice cream flavors like lobster, squid ink, or horseradish. In contrast, this list presents weird and unique ice cream flavors that are decidedly not strange in their countries of origin. Here are 10 of the most popular ice cream flavors you’ve probably never heard of. 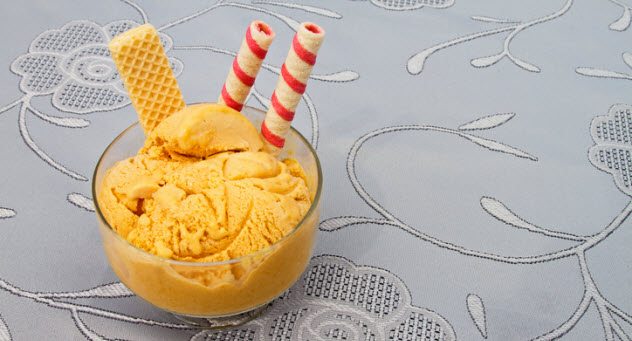 Lucuma is a subtropical fruit which originated in the Andes and is now grown primarily in Peru and Chile. Depictions of lucuma on pottery date back to pre-Inca times. Lucuma has thin, brownish-green or yellowish-green skin and bright yellow flesh with one to five large, brown seeds that resemble the pit of an avocado.

It is sometimes called eggfruit[1] because the flesh has the color of a raw egg yolk and the texture of a hard-boiled egg yolk. Rather than tasting fruity, its flavor is likened to maple or butterscotch.

While lucuma can be used in a number of ways, it is commonly found as an ice cream flavor in Peru. Though actual figures don’t exist, some claim that it is the most popular ice cream flavor of all in Peru, surpassing standbys like chocolate and vanilla.

It can also be found Neapolitan style, joined with vanilla and chocolate or vanilla and strawberry. Due to its soft flesh and tendency to lose water quickly, it is generally considered unfit for export. 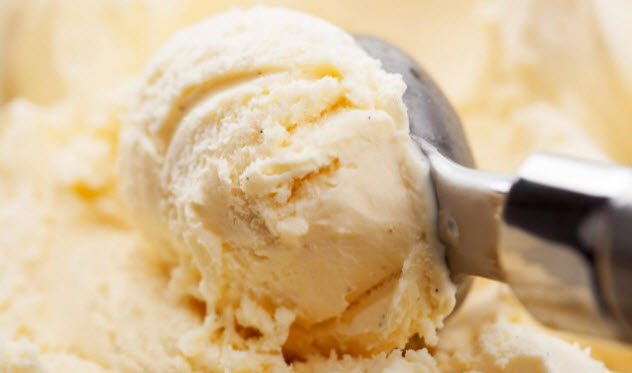 Mastic is an ancient Greek ingredient, a plant resin that is sold in the form of small crystals. These crystals can be crushed into a powder and used to flavor pastries, puddings, ice cream, and more.

Like pretty much every other item on this list, it can be used in both savory and sweet dishes. The powder is mixed with salt for savory dishes and sugar for sweet dishes. Mastic is said to be an acquired taste that is similar to pine needles—something most people (at least Americans) associate more with car air fresheners than with food.

In Greece, mastic crystals are also referred to as “tears of Chios.” On the island of Chios where the trees are cultivated, farmers make cuts in the trees, allowing the sap to seep out and harden into droplets before falling to the ground.[2]

According to legend, when the Roman navy had a fleet moored at Chios in AD 251, an officer named Isidore confessed his Christian faith to his commander. When Isidore refused to renounce his faith, he was executed and all the trees on the south side of the island were said to weep at once. 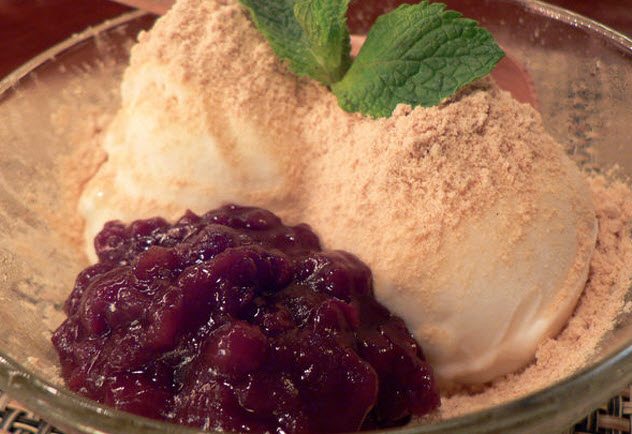 Kinako means “yellow flour” in Japanese, but this unassuming name belies a uniquely delicious ingredient. Kinako is a fine, sand-colored powder made from roasted soybeans and used primarily in Japan to give a toasty, nutty flavor to pastries and sweets.

Sometimes, it is used throughout a confection. Other times, it is simply dusted on top as a finishing touch, as is often the case with ice cream[3] and sometimes shaved ice. Kinako pairs well with vanilla, banana, brown sugar, and nuts.

Kinako isn’t the least bit strange in Japan, where it is said to have preceded sugar. Anyone who knows of Japan’s love of Kit Kats and their insane array of flavors won’t be surprised to learn that kinako has been featured in numerous varieties of the candy as well.

If you aren’t familiar with this phenomenon, here’s the gist: The name “Kit Kat” sounds very similar to the Japanese phrase kitto katsu which translates to “you will surely win.” This coincidence has contributed to Kit Kat’s popularity in Japan, especially as a gift to schoolchildren during exam time. 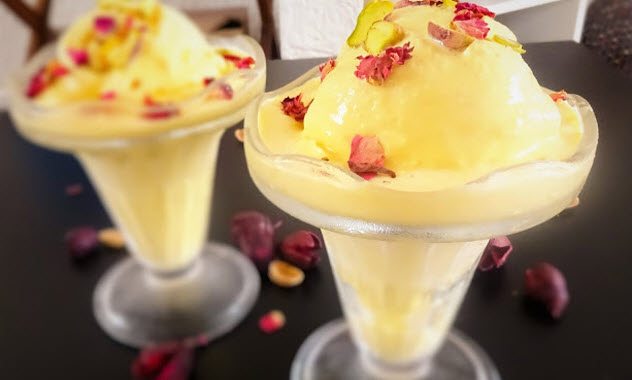 Floral flavors are not very popular in the US these days, where flowers generally conjure thoughts of perfume rather than delicious treats. It hasn’t always been that way, though.

In the very first American cookbook, Amelia Simmons’s American Cookery (1796), rosewater appears in recipes for pound cake, gingerbread, and apple pie. It was a popular flavoring before vanilla was king.

Rosewater is exactly what it sounds like—a liquid made by distilling rose petals with steam. Abroad, it is an exceedingly common flavoring to this day and can be found in countless international sweets, from Turkish baklava to Indian lassi to Persian ice cream.

Bastani sonnati, meaning “classical ice cream,” is a Persian (or Iranian) ice cream flavored with rosewater and often saffron, vanilla, and/or pistachios. Most remarkable about this ice cream is its chewiness and stretchiness, which is the result of the addition of salaab, a thickening agent extracted from a wild orchid.

Another interesting feature of Persian ice cream is the addition of frozen chunks of cream. Perhaps most unusual of all, sometimes bastani sonnati is served scooped into a glass of fresh carrot juice.[4] 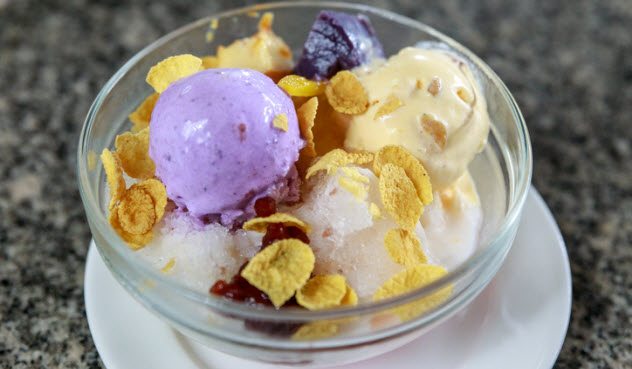 Ube is a root vegetable (aka yam or sweet potato) that is vibrant purple in color and sweet in flavor. In the Philippines, ube is used in all manner of desserts, including cakes, cookies, and ice cream. Like lucuma, it imparts both flavor and color as an ingredient.

Ube also makes frequent appearances in another frozen treat, the traditional Filipino shaved ice dessert known as halo-halo. Halo-halo is a mixture of ice, evaporated milk, and a rainbow of toppings.

Though ube ice cream is becoming more popular—and even, unfortunately, “hipster”—due to its eye-catching and Instagrammable appearance, it’s nothing new in the Philippines. Its unique flavor has been described as an “earthy” white chocolate[5] or a combination of vanilla and pistachio. Fresh ube is difficult to find in the US, but it can be bought as a powder, an extract, or a paste. 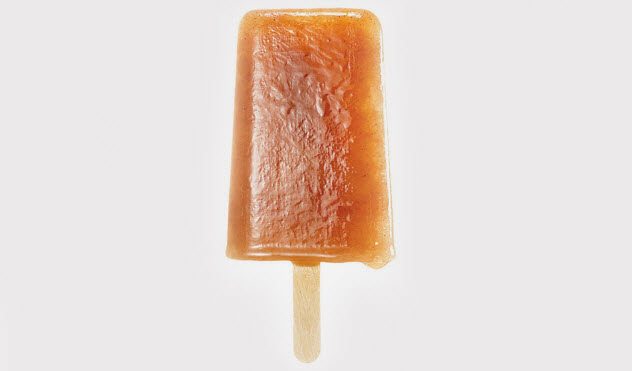 Tamarind may not be considered the prettiest of fruits, but what it lacks in appearance, it makes up for in flavor. It grows in long, lumpy pods and bears a sticky brown pulp.[6] However, that pulp has a delicious sweet-and-sour flavor that is used in cuisine all around the world in dishes both sweet and savory.

One well-known application in US households is as an ingredient in Lea & Perrins Worcestershire Sauce. It’s also a fairly common ingredient in barbecue sauces.

Tamarind can be bought fresh and as a paste, powder, or syrup. Tamarind was brought from Asia to Mexico in the 16th or 17th century by the Spaniards and now is a popular and beloved flavoring for beverages, candy, ice cream, and paletas (ice pops). 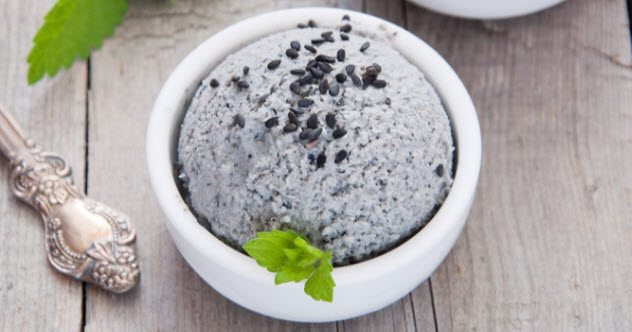 Black sesame ice cream is to Asia what vanilla ice cream is to the United States. When ground, the sesame seeds become creamy. They add a charcoal color and a rich, nutty flavor to ice cream and other dishes. The depth and complexity of black sesame seeds can also be compared to dark chocolate or coffee, flavors which are enlivened by toasting the seeds before using them.

In Japan, black sesame seeds are ground and combined with honey to make a paste called nuri goma. This paste can be found in some international markets or specialty stores.

The appearance it gives to ice cream is less like the trendy “goth” ice cream made of charcoal and squid ink and more like cookies and cream. Despite its appeal, black sesame ice cream doesn’t seem to have caught on in the US yet, at least not as well as other Asian ice cream flavors like green tea, red bean, and ginger.[7] 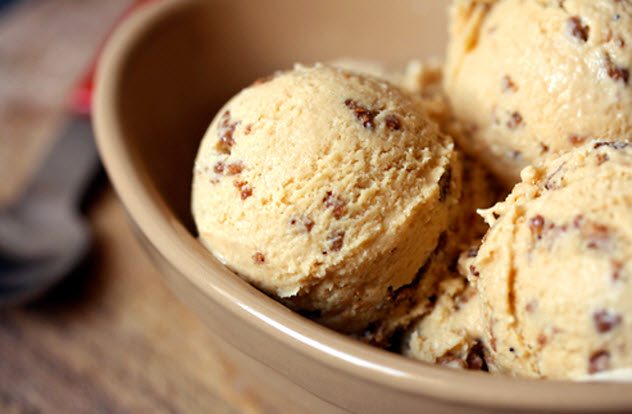 Bread may not sound like an appetizing ice cream flavor, but keep reading. Irish brown bread is known as a quick bread because it is risen with a combination of baking soda and buttermilk instead of yeast. Rather than waiting for the bread to rise or “proof,” it can be quickly assembled and baked.

Quick breads have a dense texture. The addition of baking soda is why Irish brown bread is commonly known as soda bread. It is often eaten with butter or cheese.

Brown bread, called “wheaten bread” in Northern Ireland, is a simple but hearty staple, historically associated with the Irish poor. Now it’s not uncommon to find it presented in more decadent and indulgent ways.

Brown bread ice cream can be found all over Ireland (and other parts of the UK). Toasty, crunchy crumbs of the bread are swirled into ice cream and sometimes paired with complementary flavors like butterscotch. Supposedly, this use of brown bread in frozen treats dates back to Victorian times.[8] 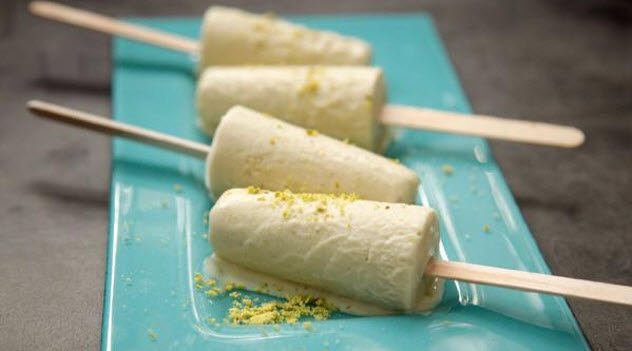 Cardamom, like tamarind, grows in pods. The pods may be used whole or ground, or the seeds may be extracted and then ground. Green cardamom is suitable for use in sweet and savory dishes, while black cardamom is considered too overwhelming and smoky for desserts. In the US, it may be best known as one of the warming spices featured in chai tea, famously sold in latte form by Starbucks.

India is the largest producer of cardamom, the so-called “Queen of Spices.” It is frequently used to flavor Indian ice cream called kulfi. Pistachio, saffron, and rosewater are also used. Much of kulfi’s flavor comes from simmering the milk for hours before freezing it to create notes of caramelization.[9]

Cardamom has also enjoyed great popularity in Scandinavia ever since the Vikings brought it back from their expeditions abroad. More cardamom is consumed in Scandinavia than anywhere in the world aside from India and the Middle East. 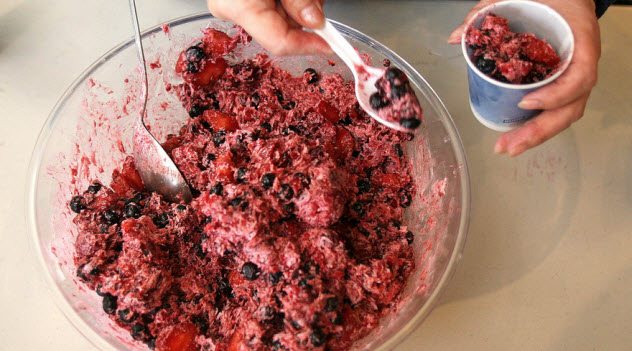 Salmonberry is the least interesting thing about akutaq, sometimes spelled akutuq, a frozen treat from Alaska. Akutaq is a native Alaskan word that simply means “to stir.”

Generally, it’s made by whipping animal fats by hand and adding sea mammal oil and snow or water until the mixture achieves a silky, fluffy texture. The fat is often from caribou, bear, or musk ox, while the oil is from seals or whales. (Modern versions use Crisco and olive oil.)

Non-natives have referred to it as Eskimo ice cream. Blood, meat, and fish eggs have all been added to akutaq. When it comes to sweet additions, two favorites are blueberry and salmonberry.[10]

Salmonberry was commonly eaten with salmon by the native peoples of the northwest coast in the area now known as Alaska. The berries do not, however, taste like fish, though their flavor can vary greatly from bush to bush and even from year to year. Though fairly common, salmonberries have not attained widespread popularity, possibly because they are described as watery and mushy.

Hannah lives in Seattle with her husband and dogs. She enjoys researching and writing.

Read about more strange foods eaten by other cultures on 10 Bizarre Cultural Foods Guaranteed To Make You Lose Your Lunch and 10 Of The Strangest Foods People Ate Through History.