Stan Lee died last week at age 95. He left behind a marvelous legacy. Alongside Jack Kirby and Steve Ditko, he helped create some of the most iconic superheroes in history. Nowadays, their popularity far transcends the pages of comic books as they are featured in some of the biggest box office hits of all time.

Lee himself has gained a large, new following thanks to the cameos he made in every Marvel movie based on one of his characters. He lived a long and interesting life, and it was bound to be full of fantastic tidbits that the general public didn’t know. Here is a look at 10 of them. ‘Nuff said. There was a time when almost all comics published in the United States needed to obtain the seal of approval from the Comics Code Authority (CCA). The organization had no ties to the government. Rather, it was created by the Comics Magazine Association of America in 1954 so that the industry could regulate itself. Therefore, there was no legal obligation to adhere to CCA standards, but lacking the Comics Code seal meant that most wholesalers would simply refuse to sell your comic.

In 1971, the United States Department of Health, Education and Welfare approached Stan Lee and asked him to do a story that dealt with the horrors of drug abuse. The CCA was against it because depictions of drugs, while not explicitly mentioned in the rule book, were considered “violations of good taste or decency” and, therefore, not allowed.

Lee really liked the story, though. He felt that the government sanction gave him the credibility necessary to push through without CCA approval. Issues #96–98 of The Amazing Spider-Man were published without adhering to the code and showed Peter Parker helping his friend, Harry Osborn, overcome an addiction to LSD.[1]

The issues sold very well despite a lack of the seal and became one of Spidey’s most popular story arcs ever. The CCA quickly changed its tune and decided that darker subject themes would be okay as long as there was a moralizing component to the story. 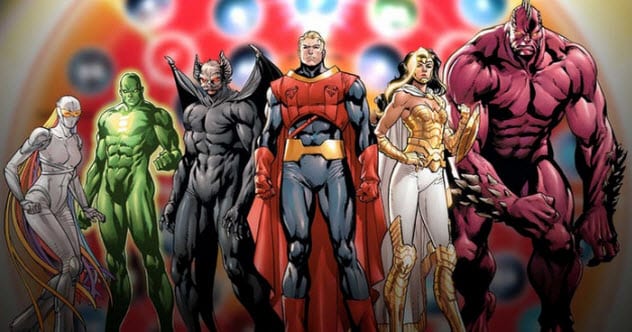 Stan Lee will always be synonymous with Marvel. But in 2001, he actually crossed enemy lines and wrote a series for DC Comics. The short-lived comic book was called Just Imagine . . .  and featured reimaginings of DC’s most popular characters, including Batman, Flash, and Wonder Woman.

Lee considered the project to be a “fun exercise” and a “heartfelt tribute” to the characters and their creators.[2] The superheroes retained many of their iconic traits but usually featured a different origin story.

For example, Batman was still wealthy, lost his parents, had no superpowers, and used tons of cool gadgets. However, his name was Wayne Williams, he was black, and he served time in prison after being framed. His suit also featured a more bat-like cowl and had gliding wings instead of a cape.

The series was announced with plenty of hype, and initial sales were strong. However, almost each title sold less than the previous one. The project ended after 13 issues. However, Lee’s characters have made cameos in other comics since then and have been officially added to the DC Multiverse as living on Earth-6.

8 Stan Lee Got Sued By A Stripper In 2003, Stan Lee created an adult animated comedy for Spike TV called Stripperella. The main character, voiced by Pamela Anderson, was a stripper who moonlighted as a superheroine. The show was canceled after one season, though, following a lawsuit from real-life stripper Janet Clover. She alleged that she originally came up with the story.

Clover sued Lee, Anderson, and Viacom. She said that she provided the Marvel creator with the idea while giving Lee a private lap dance in a strip club in Florida.[3]

The woman initially filed her lawsuit on her own, but it got enough media attention that some lawyers offered to help with the case. Clover said she wasn’t looking for money but just wanted the show taken off the air. In the end, Spike TV canceled the series after 13 episodes. The lawsuit most likely played a part in that, but another reason was creative differences between the channel and Pamela Anderson.

7 Stan Lee Was An Army Playwright

Stan Lee served in World War II where he earned the exceedingly rare position of “playwright.”

Lee enlisted in 1942. He was stationed at Fort Monmouth in New Jersey where he was learning to repair communication lines. By this time, he was an aspiring writer and had some previous experience working at Timely Comics under Joe Simon, cocreator of Captain America. The brass knew of this. So when they created the Signal Corps Photographic Center, they recruited him to this new outfit.

According to Lee, he was one of only nine people who served as “playwright” for the United States Army. The others included Oscar-winning director Frank Capra, Theodor Geisel (aka Dr. Seuss), and Charles Addams, creator of the Addams Family.

Lee’s job involved writing “scenarios and scripts for theatrical, radio, or motion picture productions for entertainment or instruction of military personnel, or for publicity purposes.” After the war, he went back to work for Timely Comics which eventually evolved into Marvel.[4]

6 Stan Lee Had A Lousy Memory Stan Lee was well-known within the comic book industry for having a terrible memory. According to award-winning writer and frequent collaborator Peter Allan David, he met Lee for the first time on five different occasions.

Each time, David would say who he was and what he did. Lee would give him a friendly smile and shake his hand, but all of that information went out the window by the time they met again. It wasn’t until their fifth encounter that Stan remembered and pointed his finger at David saying, “You’re Peter!”

Lee confessed that he had the “worst memory in the world” in a 2006 interview. In fact, that’s why so many of his creations had alliterative names like Bruce Banner, Reed Richards, Sue Storm, Matt Murdock, or Peter Parker. Lee hoped it would make it easier for him to remember them.

This worked . . . up to a point. There are a few early comics that were actually printed with the wrong names. Peter Parker’s name changes to Peter Palmer in one issue of The Amazing Spider-Man and the Hulk refers to his alter ego as Bob Banner on one occasion.[5] Stan Lee once posed partially nude for a Marvel magazine centerfold in 1983.

This happened for a Marvel fumetti book. Fumetti (aka a photo comic) is similar to a traditional comic except it uses real photographs instead of drawings. In this particular case, the fumetti featured the high jinks that went on among Marvel’s editorial staff in New York. By that time, Lee had stopped writing comics regularly for the company, but staff members felt that such an issue needed to include Stan the Man.

Thus came the opportunity for Lee to pose for a centerfold. He jumped at the chance even though he was 61 years old at the time. He sprawled on a couch with a giant-sized issue of The Incredible Hulk covering his private area. This created the illusion that Lee was completely nude, although photographer Eliot R. Brown revealed that he had kept on his “fire-engine-red bikini briefs.”[6]

Unfortunately, other people in the company thought the picture was a bit too much since Lee was a figurehead for Marvel Comics. The image used in the fumetti showed only Lee’s head with a giant Hulk costume superimposed over his body. Exclamation points are common in comic books because they make everything feel more exciting and dynamic. However, for a brief period in 1971, Stan Lee decided to ban them.

We don’t know what prompted the change of heart, but all of a sudden, Lee felt that exclamation points were childish. So he said that they shouldn’t be used anymore. The other writers mostly ignored him, so the ban only affected the strips that Lee still wrote. In 1971, this meant Spider-Man and the Fantastic Four.

There was another problem, though. Most of the issues where Lee wanted the punctuation marks erased had already been completed and were ready for printing. Therefore, the exclamation points had to be removed from the issues as they lay. However, you could only do this with the exclamation points at the end of word balloons because erasing the others would mess with the text.[7]

As a result, there are several issues of Spider-Man and Fantastic Four from 1971 where sentences have no punctuation marks at all. They happen to include one of the aforementioned Spidey comics that deal with Harry Osborn’s drug problem.

The ban lasted for three months. Other people took over writing duties around that time. They either ignored Lee’s edict, or Stan the Man realized that it had been a bad idea.

3 Stan Lee Was A Victim Of Fraud Multiple Times Stan Lee has attempted many ventures outside of Marvel, and several ended poorly, to say the least.

First, there was Stan Lee Media (SLM), which was founded in 1998 with his then-friend Peter F. Paul. The company’s biggest success was a web series called The 7th Portal. But it also included other projects, like one where the Backstreet Boys played superhero versions of themselves.

The company had grand ambitions and was working on movie deals, merchandising, and theme parks. Then the dot-com bubble burst, and SLM went bankrupt. Lee himself severed all ties with the company in 2000, but it still lived on—in name.

SLM launched multiple lawsuits in the years to follow, most notably against Disney. The company alleged that it still owned the rights to Marvel characters. Eventually, the suit was dismissed. Cofounder Peter Paul received 10 years in jail for securities fraud.

Even more disturbing accusations regarding the practices of Lee’s business associates have surfaced in recent months. It would seem that multiple opportunists gained control over Lee’s financial and legal affairs after the death of his wife, Joan, in 2017. Some of them were able to file a $1 billion lawsuit on behalf of Lee against his company, POW! Entertainment.[8]

The most extreme example would be Jerardo Olivarez, a former business associate of Lee’s daughter, J.C., who was sued in April for fraud and elder abuse. The accusations included transferring money without authorization, duping Lee into donating to bogus charities, and even extracting Lee’s blood to sell as collectibles.

2 Stan Lee Got On His Soapbox In the wake of Stan Lee’s death, many of his fans have been sharing pointed messages that he imparted while still writing for Marvel. Most befitting of all is one where he decried bigotry and racism.

Between 1967 and 1980, many Marvel titles that Lee worked on contained “Stan’s Soapbox,” a small column where the writer got things off his chest. One issue penned in 1968 during the Civil Rights Movement said steadfastly: “Let’s lay it right on the line. Bigotry and racism are among the deadliest social ills plaguing the world today.”[9] Lee went on to decry the bigot as an “unreasoning hater” and argued that we should judge each other based on our own merits.

The article was brought up again in 2017 when Lee re-shared it shortly after the white nationalist rally in Charlottesville, Virginia. Interestingly, the writer chose not to use his regular catchphrase “Excelsior” to sign off that particular column. Instead, he replaced it with “Pax et Justitia,” Latin for “Peace and Justice.” 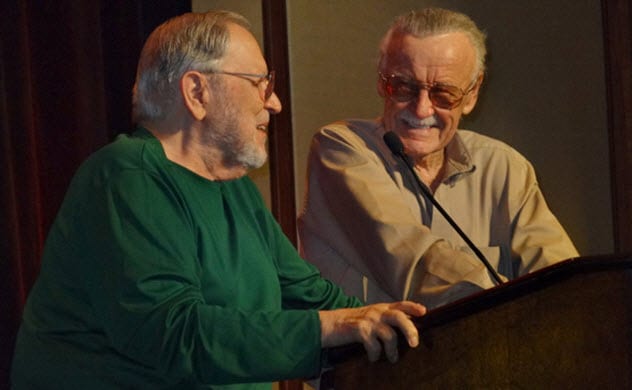 With their pitch, Lee and Romita also included a splash page to better illustrate their vision. It featured characters with penis-shaped heads and names like Magnificus the Mighty, Lord Peckerton, and High Priestess Clitanna.[10]

In more recent times, Lee claimed not to remember too many details regarding his attempted foray into pornography but asserted that it was likely motivated by money.