Historical landmarks like the pre-Columbian metropolis Teotihuacan, the famed Egyptian pyramids, and the enigmatic Easter Island enrapture us with their mystique. And they grow even more fascinating with each new discovery.

From fine banquets at King Arthur’s purported birthplace to an Aztec ball-court-turned-execution-ground to salacious Pompeiian wall art, each of these finds illuminates history’s most enigmatic sites.

10 A Tunnel To The Underworld At Teotihuacan 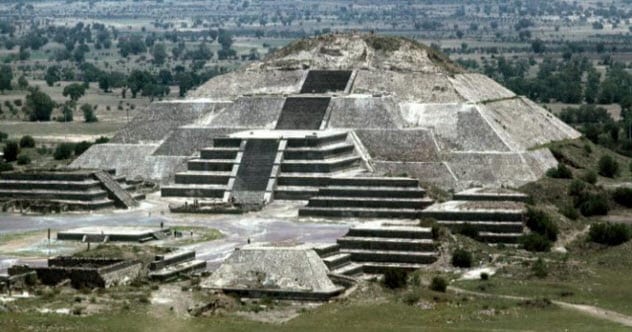 Archaeologists just found a new hidden tunnel beneath Teotihuacan, the famous Mesoamerican city of mysterious origin. Teotihuacan was first settled around 400 BC, and it was Mesoamerica’s crown jewel a thousand years later. It was also the largest city in the western hemisphere with a population that may have hit 200,000 before its enigmatic collapse around AD 600.[1]

The 10-meter-deep (33 ft) tunnel is located beneath the Temple of the Moon, the highest point in the complex. The temple is situated on one end of the Avenue of Death, directly across from Teotihuacan’s largest structure, the Pyramid of the Sun. The area is dotted with sacred ritual sites where sacrifices took place, and the tunnel served as a passageway into the underworld. 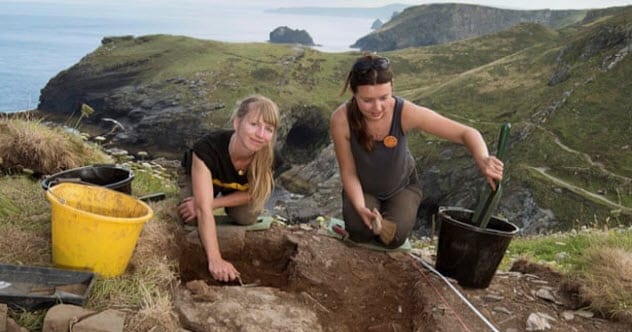 Overlooking Cornwall’s northern coast from atop a slab of rock, Tintagel Castle is supposedly the birthplace of the legendary King Arthur. What is certain is that the royals who lived there during the fifth and sixth centuries enjoyed themselves immensely thanks to imported goods that arrived from long-reaching Mediterranean trade routes.

Various types of meat were on the menu, including goats, sheep, pigs, cows, oysters, and even cod, suggesting deep-fishing activities. The royals supplemented their assorted meats with expensive oils, which were stored in luxurious Phocaean bowls and amphorae from Turkey and Cyprus. Then they washed it down with fine wine in fancy Spanish glassware.[2] 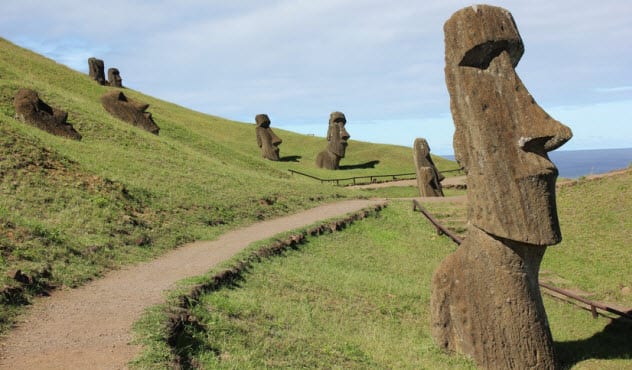 Sitting 3,700 kilometers (2,300 mi) off the Chilean coast, Rapa Nui was settled in AD 1200 by two canoes’ worth of seafaring Polynesians.

The reason for their demise is widely debated, but researchers found new clues in the basalt carving tools (toki) used to build the moai. Basalt all looks alike to the eye, but each tool has a specific chemical signature that reveals its exact volcanic source.

It turns out that most toki came from one site, hinting at an unexpected level of cooperation and exchange between supposedly hostile peoples. According to researchers, the uniformity of the tools also challenges the theory that major infighting led to the Rapa Nui’s demise.[3]

7 Ancient Traffic On The Silk Road 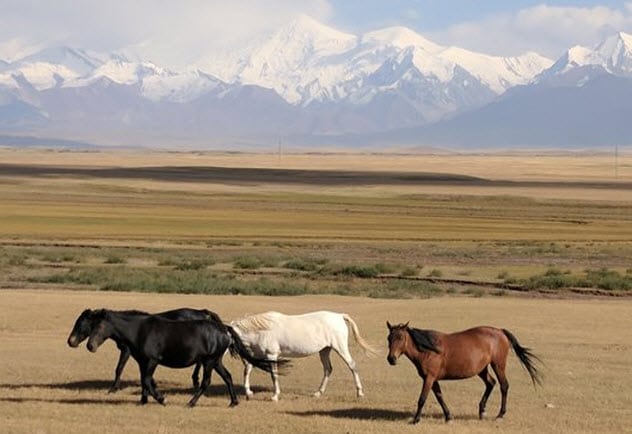 The Alay Valley is an important Silk Road site because it linked the Eurasian hemispheres through the interior of the landmass. It also appears to have been an integral link thousands of years earlier, accommodating herders and domesticated sheep, goats, and cattle.

The technique used in the study, Zooarchaeology by Mass Spectrometry (ZooMS), or shooting lasers at bones, can be used to identify material that’s too degraded for conventional analysis.[4]

6 Ancestor Worship On The West Bank 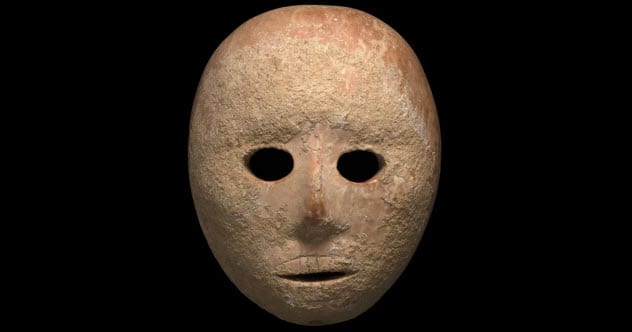 Israeli anti-looting authorities have recovered a 9,000-year-old stone mask, one of only 16 such masks known to exist.

Discovered on the West Bank by a settler, the mysterious human-face-sized artifact is made of soft limestone. The mask’s purpose is uncertain, but the holes punched around its periphery suggest that it could have been tied onto one’s face or a statue. It was probably used for a funerary rite or for ancestor worship as with similar masks found across the world.

It’s indicative of its time, a historical period when humans began settling down into permanent communities and engaging in new social and religious activities.[5] 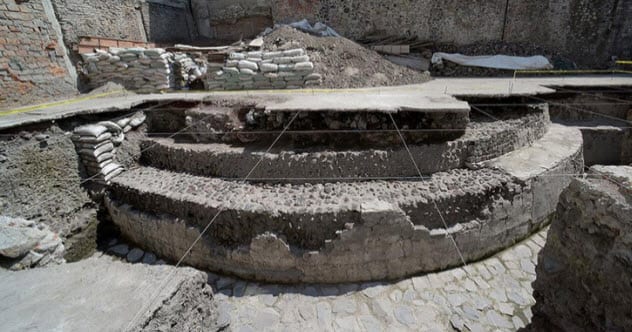 A piece of pre-Spanish-conquest history was recently discovered beneath Mexico City’s streets: a 15th-century ball court and its associated temple.

The Aztec temple was devoted to a wind god named Ehecatl, and it included a ceremonial Mesoamerican ball court. It’s the world’s oldest sport to use a rubber ball, dating back to at least 1600 BC.

The game involved two teams trying to keep a ball inbounds, like volleyball. However, players were prohibited from using hands or feet and mostly relied on their hips.

Unlike modern sports, it was a brutal, highly ritualized affair that ended in death. Accordingly, researchers also recovered 32 neck vertebrae that were lopped off from losing players and then presented to the gods.[6]

4 Leather ‘Thigh-Highs’ On The Thames 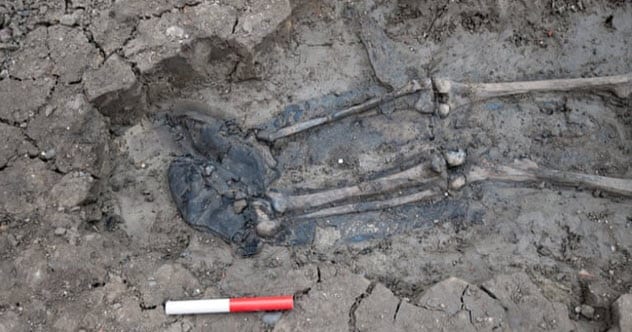 Archaeologists sweeping the site of the future Thames “super-sewer” found the 500-year-old skeleton of a man who apparently fell and drowned along the shore.

Even more fascinating is his footwear: knee-high leather boots. Rare for their time, the boots are unheeled with a single flat sole, made of leather, and stitched together with waxed flax thread. Moss was likely placed inside as insulation.

These waders as well as signs of degenerative joint disease and damaged teeth (from biting on ropes) suggest that the man worked on the docks, fished, or served as a mudlark, scavenging lost items from the mud.[7]

3 A Sweet New Ramp At Hatnub 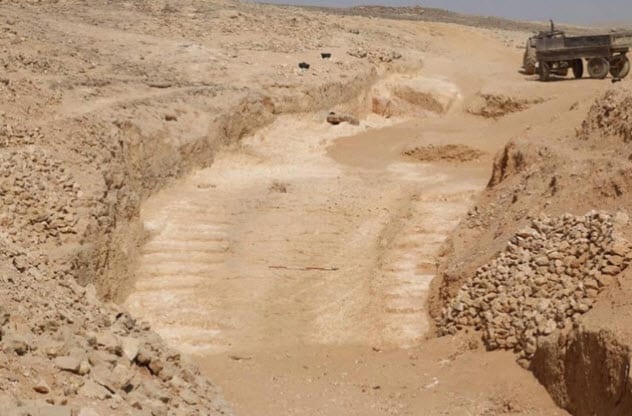 Researchers at the Hatnub alabaster quarry near Luxor found a 4,500-year-old ramp from the time of Cheops (aka Khufu) and his commissioning of the Pyramid of Giza. The ramp is surprisingly steep and features stairs as well as what researchers believe to be postholes. This offers a fresh clue as to how the pyramid was built.[8]

According to researchers, workers would have used the postholes to set up a pulley system, allowing teams to exert force onto the giant blocks from up top as well as below. If such tech was used to carry stones to the building site and to erect the pyramid, it could have significantly sped up the whole process. 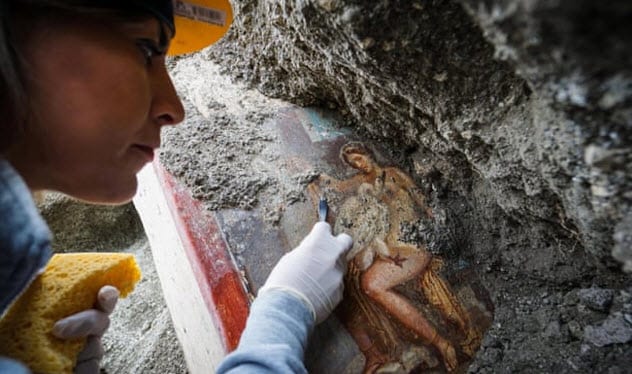 Buried since AD 79, the fresco was found in a house along the Via del Vesuvio. And it’s not just smut, it’s good art, with the depiction of Leda possessing a Mona Lisa–like effect that follows the gaze of anyone entering the room.

The fresco isn’t a one-off. The project previously revealed a portrait of Priapus in an adjacent room in which the fertility god is seen weighing his trademark symbol, a phallus.[9] 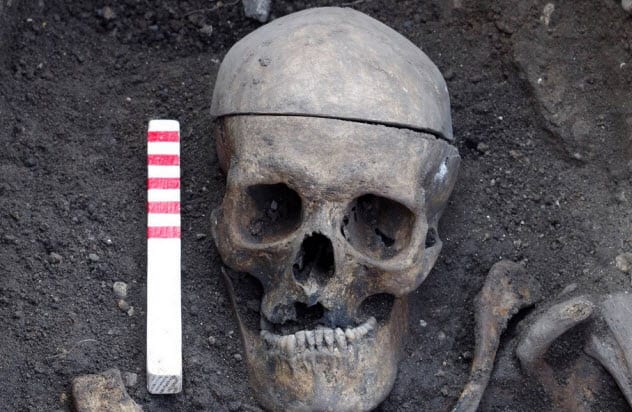 Skeletons from a cemetery at New Covent Garden Market show that this part of 19th-century London was a noxious, vicious mix of beggars and fiends.

The skeletons date from the period of mass industrialization between 1830 and 1850. In addition to malnutrition, the remains of an older woman showed signs of chronic illness as well as a lifetime of toil and heavy labor. On top of that, she exhibited signs of syphilis, a broken nose, a missing tooth, and a fatal stab wound behind the right ear.

The skeleton of a 183-centimeter-tall (6’0″) man was recovered in equally poor condition. The bloke had a smashed-in nose and beat-up hands, suggesting a bare-knuckle boxing career. He also sported broken bones in his spine and hip, a giant cyst on the roof of his mouth, knocked-out teeth, and, of course, syphilis.[10]

Ivan writes about all sorts of cool things for the Internet. You can contact him at [email protected]