Many religious artifacts, predominantly statues or images of the Virgin Mary or Jesus Christ, have been subject to claims of miracles or divine events. While the vast majority of these are exposed as hoaxes designed for monetary gain or even to attract more people to the church, some are still without explanation.

Perhaps the fact that these incidents made international news, if only for a short time, suggests a little more to them than simple trickery. That is not to say they’re divine. But they are interesting cases of something a little bit out of the ordinary. 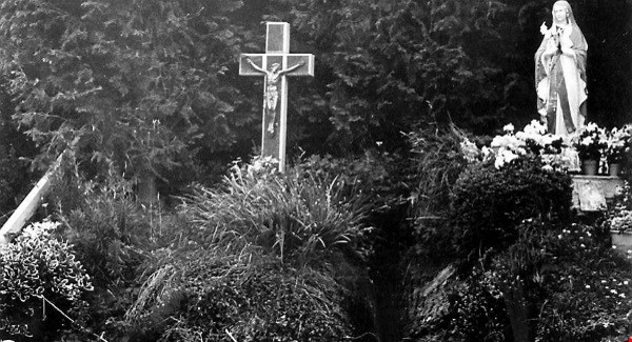 Beginning in the summer of 1985 Garda (police) sergeant John Murray would receive numerous reports of a “moving statue,” nicknamed “Our Lady” by those who had witnessed the apparent miracle, at the side of a road in the small market town of Ballinspittle.[1] By the time his wife began informing him of accounts she had heard, hundreds of people had descended on the small Irish town, looking to see the divine act for themselves.

Although skeptical at the time, when Murray went to see the statue for himself, he, too, witnessed a bizarre incident. Speaking of his experience 30 years later, Murray stated, “In July 1985, I saw something physically impossible at that grotto. I saw a concrete statue of Our Lady floating in mid-air!” Dozens of other people have made similar claims.

Many people still visit the area today, and while some claims of seeing the statue move—or even of visions of Jesus—still surface, most use the area as a (now) sacred place to pray. Incidentally, skeptics (of whom there are many) maintain that it is simply a “trick of the light” that makes the statue appear to move.

In July 2015, reports came out of Australia claiming that a painting of the Virgin Mary in Saint Charbel’s Church in Sydney moved its lips “in synch with prayer.” Many parishioners swore to have seen the divine act with their own eyes, with one person, Kristen Keirouz, even managing to film the incident. She claimed she and two friends all saw the lips moving as the congregation prayed, and when she uploaded the footage to social media, many like-minded Catholics agreed with her and praised the footage as a miracle.

Others, however, claimed it to be a hoax of sorts, insisting that the movement of the camera combined with the lighting in the church gave the impression that the lips were moving. All three of the witnesses, as you might imagine, assure skeptics that what they saw was “not just lighting.” Another parishioner, George Akary, went on to claim that he, too, had seen this phenomenon himself and had also filmed it.[2]

For their part, the church involved stated they believed the footage to be an “optical illusion” and “not a miracle.” 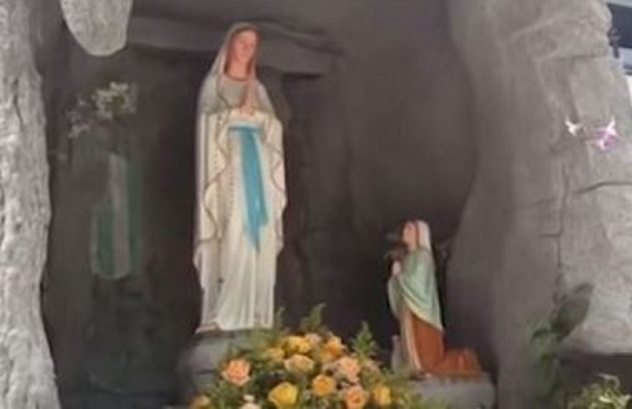 In October 2015, a small church in Malaysia was the focus of hundreds of people who had flocked to the area in the hopes of seeing the Virgin Mary “coming alive.”[3] Many witnesses, including several church officials, claimed to have seen the Our Lady of Fatima statue “grow taller,” smile at them, and even cry before them.

The statue, inside the grotto at St. Thomas Church in Subang Jaya, apparently first moved during a blessing ceremony being performed in its honor. According to those present, the fiberglass statue turned to porcelain before their eyes and also grew 8 centimeters (3 in) taller. Other accounts tell of parishioners singing “Ave Maria,” to which the statue of Mary smiled and moved her lips with them. Further to this, the statue “was full of life” before them, even watching them with eyes full of tears.

When the report made international press, the church told the media that they were awaiting confirmation from the Vatican as to whether what they had seen was a miracle. 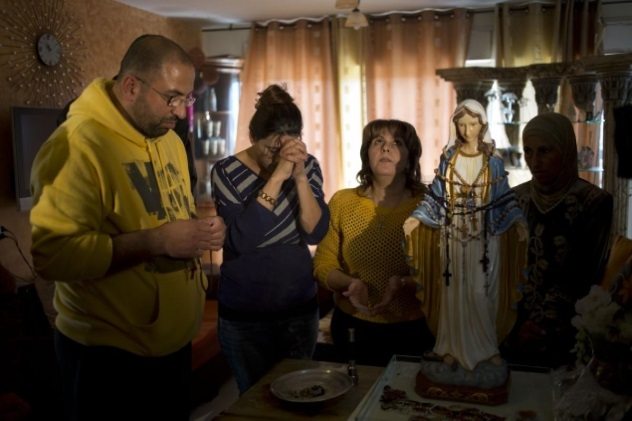 The small town of Tarshiha in Northern Israel, near the Lebanon border, witnessed thousands of Christians flock to a small house in the area in the early months of 2014. The reason for this sudden pilgrimage was a statue of the Virgin Mary in the home of Osama Khoury, which for unexplained reasons, had begun to “weep oil.”[4]

Even more remarkable is that Khoury’s wife Amira claims that the statue actually spoke to her, telling her not to be afraid. The Khourys first noticed the bizarre phenomenon after returning home to find the statue completely covered in oil. After wiping the oil away, parts of the statue still appeared slick, but it wasn’t until they saw the oil come from Mary’s eye that they understood what was happening. A neighbor also witnessed the statue weeping oil, and in no time at all, news of the incident had spread like wildfire.

At the time the couple spoke to the media in February 2014, they claimed that over 2,000 people had been to their home in the previous seven days alone. 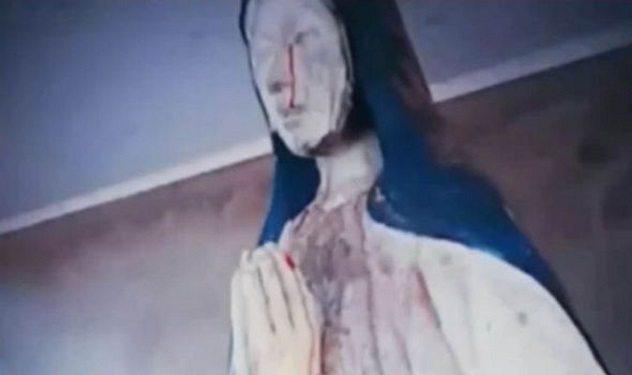 In August 2016, video footage of a statue of the Virgin Mary weeping blood appeared online.[5] The church housing the apparently divine statue sits in the Manuripi-Heath Amazonian Wildlife National Reserve, in the Pando Department in Bolivia. According to reports, the church has declared the incident a miracle, although the Vatican stated that they “had not endorsed it as a miracle yet.”

Local priest Jose Luis Mamani even went on to state that he had witnessed the statue “bleeding from its hands,” while many parishioners also claimed to have witnessed the miracle for themselves. One of them was Ana Cristina Jimenez, who claimed she felt “joyful, sad . . . everything!” According to many of the witness statements, the blood seemed to appear during times of prayer, with “streams of bloody tears” rolling down the face of the Virgin Mary.

Incidentally, samples of the blood were collected for analysis, although the results of any testing have yet to be declared. 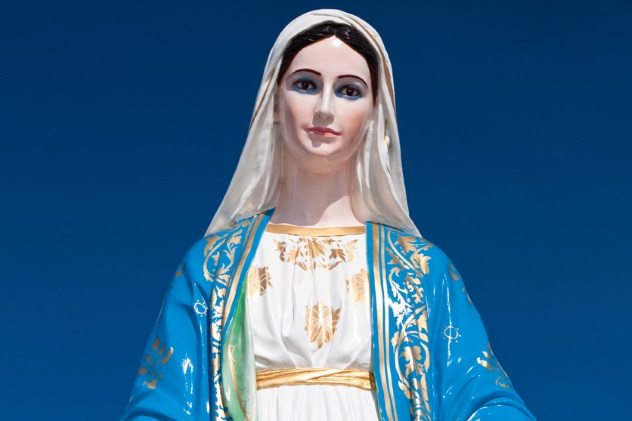 In Perth in 2002, a fiberglass statue of the Virgin Mary began to weep scented tears.[6] When the owner of the statue, Patty Powell (who claimed to have bought it in Bangkok in the mid-1990s), announced the news to the media, thousands of people of the Catholic faith made their way to the small church. Even the archbishop of Perth stated his belief in the authenticity of the weeping statue, further claiming that after originally having been skeptical, he saw the miracle for himself.

Scientists took samples of the “tears” in an attempt to uncover what the substance was or what the source of it might be. However, they were unable to come to any conclusions, with X-rays of the statue finding no inner cavities or the presence of liquid. A local priest even claimed that the tears, when used as anointing oil, gave “great comfort to the sick.”

Doug Clarke, a chemist at Murdoch University, claimed he still believed the scented tears to be a hoax, although he couldn’t find any proof of this. He stated that someone had been “very tricky.” 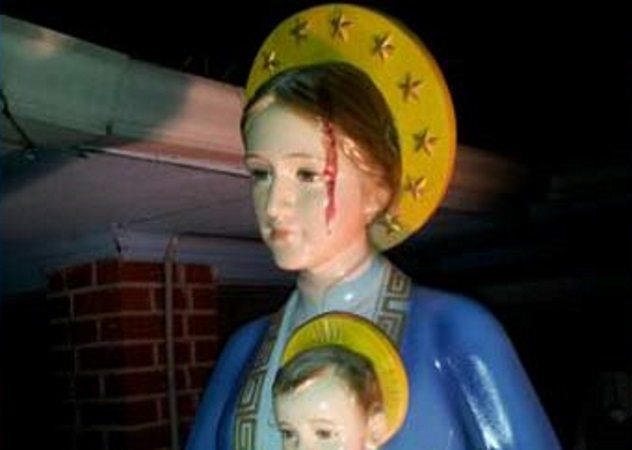 While mowing his lawn in Baton Rouge, Louisiana, in 2012, local resident Mr. Doan suddenly stopped dead in disbelief. There in front of him, a statue he owned of the Virgin Mary holding baby Jesus was bleeding from the temple.[7] After checking the substance, he found it to be wet, and more to the point, the source did indeed appear to be the hairline of the statue.

His wife, Hoa Doan, was also witness to the events, telling WLOX Channel 13 News that the dripping blood was a “real message from God.” She went on to describe how she told all of her neighbors of the miracle before they would spend the night praying in the presence of the divine statue. Dozens more believers would place themselves on the Doans’ lawn, eager to see the miraculous incident for themselves.

Needless to say, not everyone was as convinced, with a professor of religious studies at Louisiana University offering that the supposed miracle was more likely a result of worshippers’ lifetime devotion to their faith. Essentially, they were seeing what they wanted to see or how they wanted to see it. 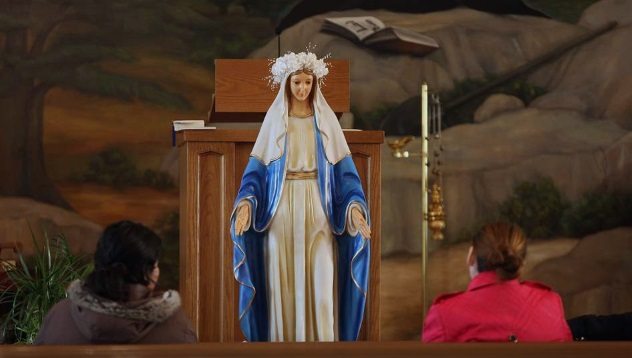 At St. Charbel Maronite Roman Catholic Church in Ottawa, Ontario, Canada, in November 2010, a plaster statue of the Virgin Mary was the focus of the world’s media and many of the Catholic faith due to the claims that she smiled down on the parishioners during the day and wept tears of “healing oil” at night.[8] The former owner of the statue, Fadia Ibrahim, who donated it to the church, claimed that the miracles were simply part of the Madonna’s mission to bring people back to the church. She offered to the media, “She wants people to pray, go back to the church!”

As Ibrahim elaborated on the backstory of the smiling, weeping statue, it became even more intriguing. She claimed the Virgin Mary began appearing to her in visions in 2008, and after word had spread through the Catholic community, people began to travel to her home, sometimes offering gifts. One of these was the statue she eventually donated to the church, but not before acting on instructions from the statue itself to build a pedestal and display it in her front garden. As the crowds grew larger and larger, the local authorities insisted she remove the statue for public safety reasons. 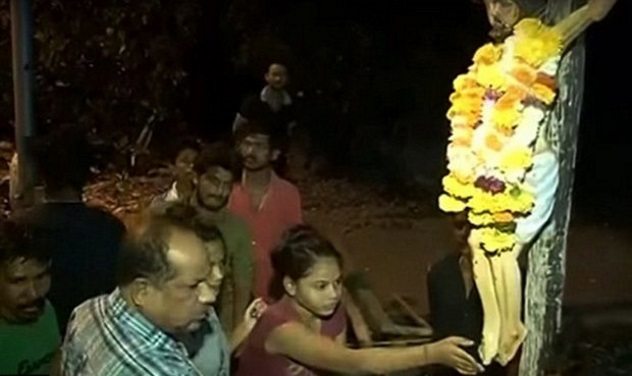 In November 2016, a statue depicting the crucifixion of Jesus in the small village of Kharodi, near Mumbai, began weeping tears.[9] Word began to spread among the faithful communities, both near and far from the village, resulting in crowds of believers flocking to witness the miracle for themselves.

Many people even tried to collect the divine tears in small cups and bowls, convinced of their holy nature and healing powers. A number of those who arrived in the small village had spent days walking in order to witness the fantastic display. The intense desire of the crowds that arrived to view the statue was such that the police had to be called to calm the faithful so that they did not injure themselves in a crush as they surged forward as the statue “wept.”

As in all situations where miracles are claimed to have happened, the encounter was submitted to the Vatican, so they might declare it authentic.

In the small Church of Santa Ana in Tepetitlan, Jalisco, Mexico, a member of the congregation appeared to have caught a divine act as he filmed the service he was attending in April 2017. In the background, behind the vicar, a statue of Jesus on the cross is visible. Suddenly, the head moves from one side to the other, stunning the person making the film.[10]

The clip was uploaded onto social media and quickly went viral, with many fellow Catholics voicing their agreement that it was indeed a miracle. That it happened during Good Friday Mass only confirmed this to them. One witness stated to local media, “He [Jesus] wants to tell us something! He wants something from us!”

Parish priest Juan Antonio Guerra Lule claimed that although the incident was “something beautiful that happened,” he didn’t believe it to be a miracle—so much so that he had declined to report the incident to the Vatican for confirmation.