Human history could be said to be one of ever-increasing knowledge. Overall, we know more today about a great many things than people did in centuries past. That doesn’t mean, however, that there weren’t a number of missteps along the way.

You wouldn’t think it’d be that easy to “discover” something that doesn’t actually exist—because it doesn’t exist. However, many people throughout history have claimed to have discovered things which were later shown not to be real, be they mythological creatures, dinosaurs, moons, islands, or even elements. 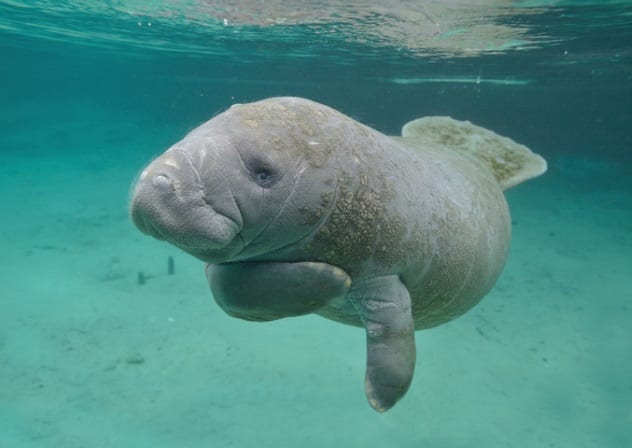 On January 8, 1493, Christopher Columbus spotted three mermaids swimming in the ocean as he made his first voyage to the Americas. He wrote in his diary that he watched as the three mermaids rose out of the sea. He added that they were not as beautiful as people claimed and had some male features.

Columbus wasn’t even the first sailor to claim the discovery of mermaids. Sailors of the day often claimed to have spotted real-life mermaids as they sailed across the ocean. Today, we know these so-called mermaids were actually manatees, a large aquatic mammal that can be mistaken for a human or humanoid from afar.

The manatee and its closely related cousin, the dugong, are known to rise out of the water on their tails as if they were mermaids appearing on the surface. They also have five sets of fingerlike bones on their forelimbs and can turn their heads around like humans. It’s little wonder that sailors thought they were seeing mermaids when they spotted manatees.[1] 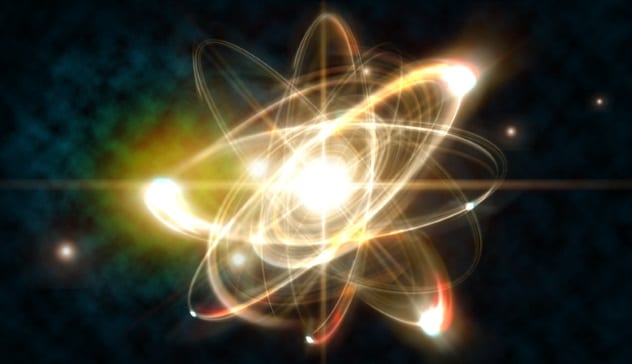 The periodic table is one of the most important parts of chemistry. The table is structured so that chemists already know some facts about every element that could exist on the periodic table, even if it has not been discovered. In fact, they even reserve spaces for these undiscovered elements.

The periodic table had lots of unfilled spaces some decades ago, and chemists often raced to discover missing elements. Their reward was the exclusive naming rights to any element they found. Some named the elements after themselves or after the the city in which they lived and worked.

However, many scientists often reported the discovery of elements that turned out not to be real. Some did so in error after mistaking some impure elements for new ones. Others were after the naming rights of the elements. It later became a sort of fad, with chemists claiming to have discovered some nonexistent element and rival chemists disproving the existence of that element.

In 1926, Luigi Rolla of the University of Florence in Italy announced the discovery of element 61 of the periodic table. He called it florentium, after Florence, Italy. Several chemists were working on finding the element at the time, and Rolla quickly announced his “find” because he wanted to be first.

Later, Rolla’s colleague, Lorenzo Fernandes, called for the “discovery’s” retraction. However, Rollo insisted florentium existed and destroyed Fernandes’s reputation. Another group of chemists from the University of Illinois claimed the discovery of element 61 a few months after Rollo did. They called it illinium, after Illinois. Chemist Charles James also said he’d found the element.

The existence of florentium, illinium, or whatever fanciful name it was called was later disproved. The real element 61 is promethium, a radioactive element which rarely exists naturally on Earth. An embarrassed Rollo wrote up a retraction of the element florentium in an obscure journal published in the Vatican. He also wrote most of the retraction in Latin so that people wouldn’t read it.[2] 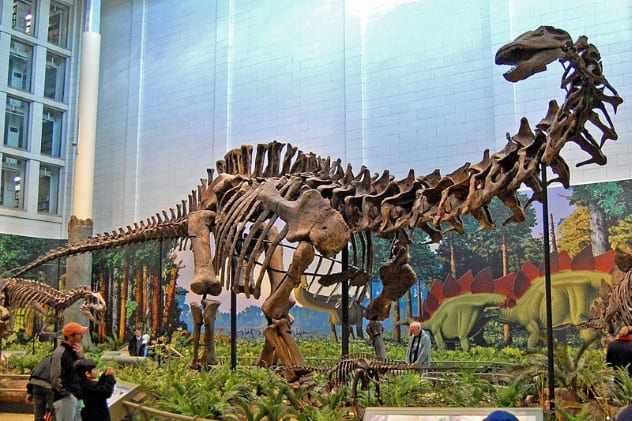 In the late 1800s, American paleontologists Othniel Charles Marsh and Edward Drinker Cope were locked in a competition to discover and name the latest dinosaur fossil. This period was called the Bone Wars.

Both paleontologists frequently attempted to announce the discovery of the newest dinosaur before the other. At the same time, both men tried stopping the other from discovering and naming new dinosaurs. There are claims that they often ordered fossil collectors to destroy leftover fossils in the ground so that the other would not find them.

In 1877, Marsh discovered the incomplete fossil of a long-necked dinosaur that was missing a head. Marsh announced the discovery of the new dinosaur in 1883. However, he added the head of another dinosaur. He named his new discovery the Apatosaurus (deceptive lizard). 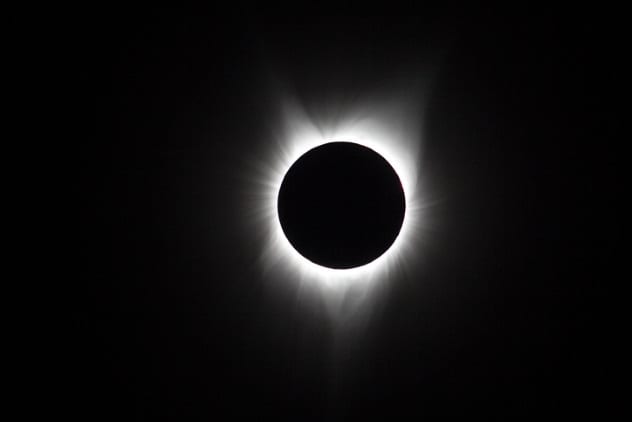 On August 7, 1869, two scientists, Charles Augustus Young and William Harkness, observed a green line around the Sun during a solar eclipse. They made the discoveries independently, which sort of makes the whole thing interesting. They considered the line an undiscovered element and named it coronium.

Dmitri Mendeleev, who would later create the periodic table, believed the element was lighter than hydrogen and suggested it be called newtonium. Today, we know hydrogen is the simplest and lightest element in the universe. We also know coronium does not exist.

The existence of coronium was disproved in the 1930s, when Walter Grotrian and Bengt Edlen reported that the green line was actually caused by highly charged iron. Young and Harkness had mistaken iron for a new element.[4] 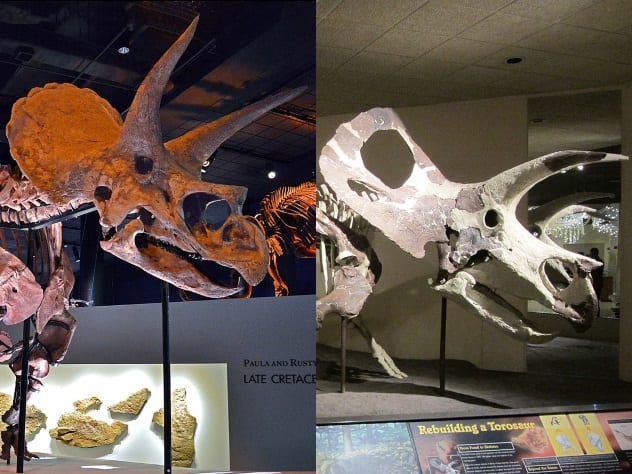 Triceratops and Torosaurus are two more genera of dinosaurs that have been disputed. Both dinosaurs were universally considered as distinct but closely related creatures until two researchers hypothesized that they were actually the same.

Triceratops (left above) and Torosaurus (right above) each have three horns on their heads. However, the horns and some facial features look slightly different, indicating they could be different creatures. But then paleontologists John Scanella and Jack Horner claimed that Torosaurus is actually Triceratops fully grown. Their horns and faces look different because they slightly changed as the dinosaur grew.

The announcement caused much consternation among fans of the more popular Triceratops. They feared their beloved Triceratops would be renamed the less cool-sounding Torosaurus. However, the dinosaur would most likely still be called Triceratops if the two genera ended up being the same, since Triceratops was named first.[5]

Also, the assertion that Triceratops and Torosaurus are one and the same remains unproven and has been heavily contested in paleontological circles. 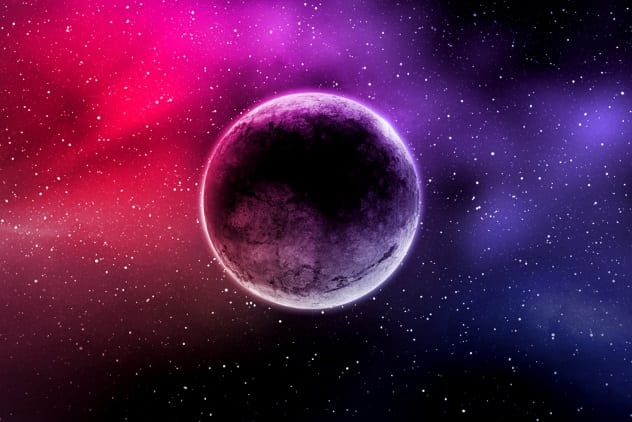 The nonexistent Neith used to be considered the moon of Venus. Its discovery was first reported by famous astronomer Giovanni Domenico Cassini on January 25, 1672. Cassini said the moon was one-fourth the size of Venus. He also reported spotting it again on August 28, 1686.

Cassini’s discovery was backed by James Short, who reported spotting the moon on October 23, 1740. He said it was one-third the size of Venus or less. The existence of the supposed moon soon became shaky, however, when several prominent astronomers claimed they could not find it, even after other, equally prominent astronomers said they’d seen it.

The existence of Neith was partly disproved by the head monk of the Vienna Observatory in December 1757. The abbot reported that he only saw the moon using one of the several telescopes in the observatory. The other telescopes came up with nothing. He added that he felt the supposed moon was actually a comet.

The monk spotted the elusive moon again in March 1758. He said it while it looked like a moon, it was actually nothing. He concluded that Neith was actually an optical illusion. In 1887, M. Paul Stroobant claimed the observations of the “moon” were either stars or had been caused by defective telescopes.[6] 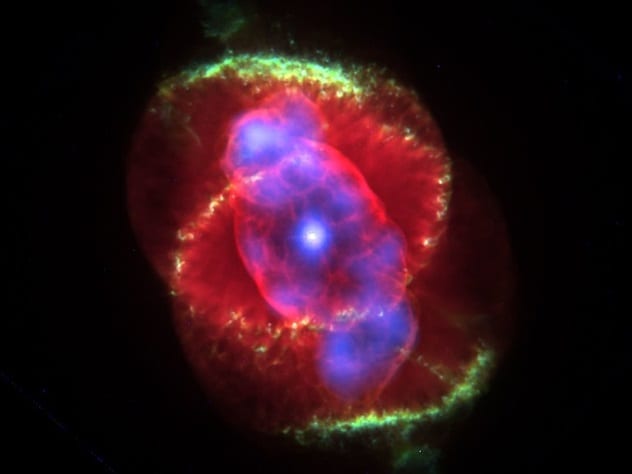 And now back to nonexistent elements that people have “discovered.” In 1864, Sir William Huggins announced that he’d observed an element he called nebulium. Huggins made his discovery with a spectroscope.

Huggins used the spectroscope to separate light from a nebula. He discovered it emitted light of two shades of green. Huggins erroneously believed he had discovered a new element since no known element emitted light at those wavelengths. He named it nebulium after a nebula.

The existence of nebulium was disproved in 1927, when Ira Bowen determined that “nebulium” was actually oxygen, just in a state it could never exist in on Earth.[7] 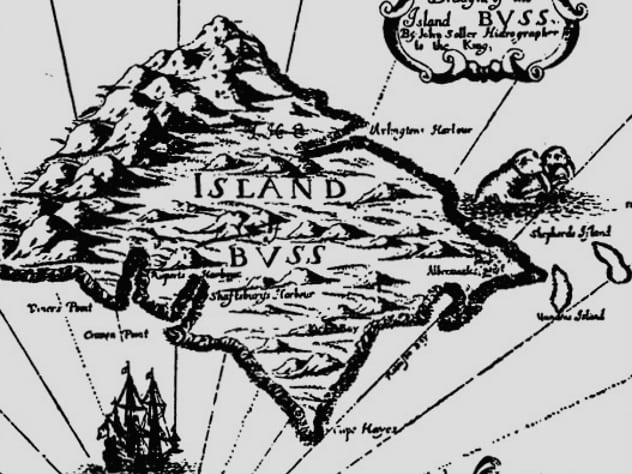 The discovery of Buss Island is often credited to explorer Martin Frobisher, even though it was first spotted by Captain James Newton during a 1578 expedition searching for gold in the Arctic. This was probably because the 15-ship expedition was led by Frobisher.

Newton, the captain of Emmanuel, one of the ships on the expedition, announced the discovery of the new island as they sailed past Southern Greenland. The island was named after the Emmanuel, which was a buss ship: a type of small fishing boat with two or three masts.

Curiously, other ships regularly passed the area, and none had ever spotted the island. Nevertheless, nobody questioned Captain Newton, and cartographers added Buss Island to their maps. Other sailors soon reported not seeing the island, even after carefully looking out for it as they sailed past its supposed location.

The Hudson Bay Company sent out a two-ship expedition led by Captain Shepherd to explore the island. However, Captain Shepherd could not find it. Company executives were so devastated that they didn’t try to find the island again. Nevertheless, other ships continued to search for Buss Island without success.

Buss Island was finally shown to be nonexistent in the 18th century. There were suggestions that it could have sunk due to volcanic activities. However, a search of the sea bottom revealed no island had sunk there. Other suggestions are that it was a mirage or that some already known island was mistaken for a new one. Some even think the captains mistook part of Greenland for an island.[8] 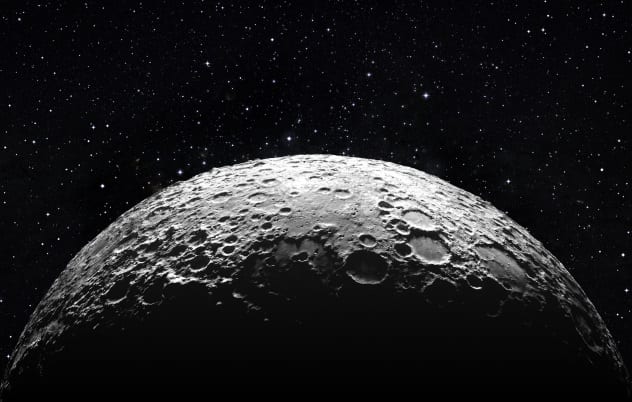 In 1861, German astronomer Hermann Goldschmidt announced the discovery of Chiron, which he considered the ninth moon of Saturn. However, other astronomers doubted the existence of the moon because they could not find it. It wasn’t until 1977 that Charles Kowal spotted the elusive moon again. Kowal observed that Chiron was actually a small body orbiting between Saturn and Uranus.

While 2060 Chiron is considered a centaur (a body orbiting between the asteroid and Kuiper belts) today, its prior “discovery” as a moon actually led to the observation of the real ninth moon of Saturn. The moon, Phoebe, was discovered by William Henry Pickering in 1898. Pickering discovered Phoebe after analyzing the observations Goldschmidt made during his “discovery” of Chiron.[9] 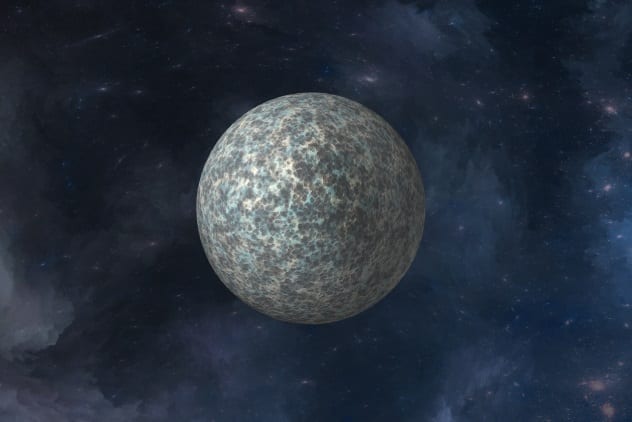 Themis was later revealed to be nonexistent. Janus, the real tenth moon of Saturn, was discovered in 1966. It is very unlikely to be Themis since they have very different orbits. Pickering discovered his so-called moon orbiting between Titan and Hyperion, two other moons of Saturn. Janus orbits very close to Saturn.

Pickering made some more weird “discoveries” after Themis. In 1921, he claimed to have observed plants growing on the Moon. He also added that the shape of the Moon’s Eratosthenes crater was caused by some insects living on the Moon.

Nevertheless, Pickering made several important contributions to astronomy. In 1919, he predicted the existence and location of an undiscovered planet after Neptune. His prediction was crucial to the discovery of Pluto.[10] In 1908, he also predicted that the airplane would one day be used to drop bombs.