Few historical figures have been more vilified than the Roman emperor Nero. In fact, his very name has become synonymous with evil, debauchery, and decadence. After all, he’s been blamed for setting fire to Rome, murdering his mother, erecting a 37-meter (120 ft) statue of himself, and torturing Christians—all contributing to his enduring legacy and a permanent place in the tyrant hall of fame.

Some stories about Nero can be viewed as apocryphal as well as patently false. For example, he never played the fiddle while Rome burned because the instrument hadn’t been invented yet. Even so, long-standing accounts and recent archaeological findings reveal a remarkably complex and disturbed young man.

10 All In The Family 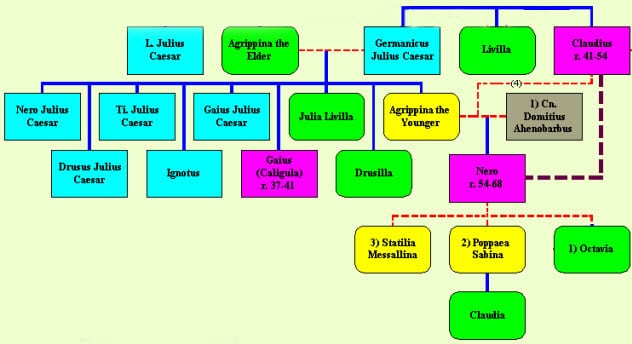 Hoping to keep their bloodlines pure, the Julio-Claudian dynasty instead created a murky gene pool and who’s who of Roman nobility. Nero’s mother, Agrippina (the sister of Caligula), married her third husband, Emperor Claudius (who also happened to be her uncle), after he murdered his third wife, the niece of Nero’s father. Got that? No matter—it gets worse.[1]

In AD 53, 16-year-old Nero married his stepsister, Claudia Octavia, and when power-hungry Agrippina had Claudius poisoned to death the following year, her teenage son (and alleged lover) ascended to the throne. Keeping with family tradition, Nero soon emulated his mother’s wicked ways and ordered her assassination.

He then tossed his wife in prison and later cut off her head as a present for his second wife, Poppaea Sabina. That marriage quickly soured, too, and after kicking her to death while she was pregnant, Nero married one of his cousins. 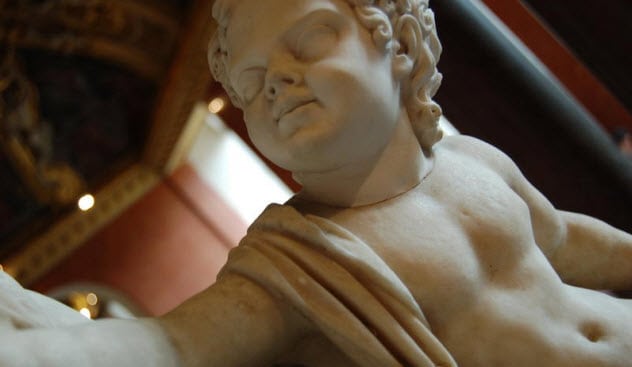 Nero had a complicated relationship with his family. If he’s wasn’t involved with them romantically, he spent his days and nights plotting their deaths. Family reunions must have been awkward.

Britannicus, the natural son of Claudius as well as Nero’s stepbrother (and younger brother of Nero’s wife), became an early victim. As a direct descendant to the fallen emperor, Britannicus held a valid claim as the worthy heir to the crown. Nero saw it differently—and made sure his stepbrother never saw his 14th birthday.[2]

Did the paranoid man-child whack other relatives? Probably. Was being related to these people unhealthy? Absolutely. 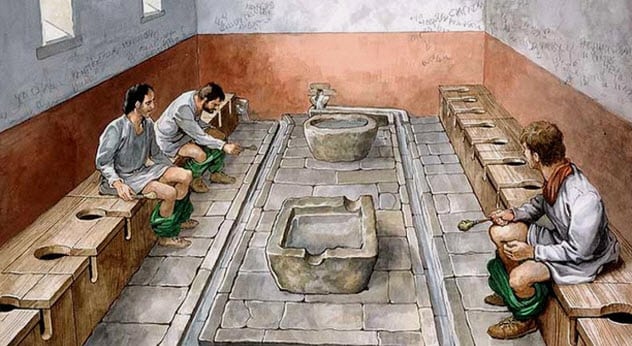 History teaches us that Augustus became the first Roman emperor, introducing a robust period known as the Pax Romana (Latin for “Peace of Rome”). He’s also credited with founding the principate, rebuilding Rome’s infrastructure, expanding the empire, establishing a standing military, and creating a permanent firefighting and police force.

Nero, however, was the first to tax urine. Seriously.

Back in the day, pee was a natural cleaning agent with a variety of uses, such as washing clothes, tanning leather, bleaching textiles, and even brushing one’s teeth. When exposed to nitrogen in the atmosphere, urine undergoes a chemical reaction in which proteins metabolize to produces ammonia—a commodity in high demand during the first century AD.

Nero sought to capitalize on this flowing resource by levying what came to be known as the vectigal urinae (“urine tax”). When public urinals and private toilets became full, the collector would be charged a tariff on these pots of liquid gold. As a result, Nero helped popularize the phrase Pecunia non olet (“Money does not stink”).[3] 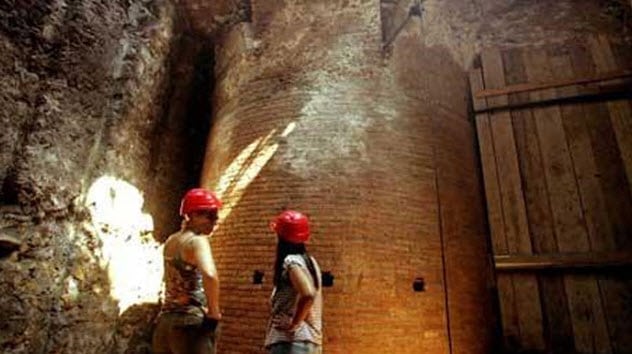 On September 29, 2009, archaeologists in the Palatine Hill area of Rome unearthed a startling discovery: the remains of an elaborate banquet hall featuring a rotating chamber built during the reign of Nero.

Housed in his sprawling palatial complex, Domus Aurea (“Golden Palace”), the circular structure is believed to have rotated day and night to mimic the perceived rotation of celestial bodies—with Nero at its center. According to lead archaeologist, Francoise Villedieu, the excavation confirmed Nero’s extravagant lifestyle. “This cannot be compared to anything that we know of in ancient Roman architecture,” said Villedieu.

Latin historian Suetonius also wrote about its opulence, where sliding ivory panels showered flowers and perfumes on guests below. The engineering marvel spanned over 16 meters (50 ft) in diameter, supported by a 4-meter-wide (13 ft) pillar and four spherical mechanisms. Most likely, it was powered by a steady flow of water to keep the room revolving.[4] 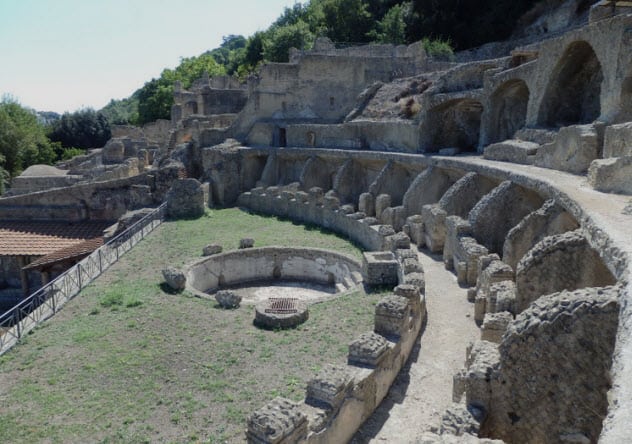 Nero’s lavish homes became some of the most indelible hallmarks during his 14-year reign. So was murder. And he spared no expense—or morals—while luxuriating at his coastal villas in Baiae.

Situated 240 kilometers (150 mi) south of Rome along the shores of the Gulf of Naples, Baiae provided an alluring escape from the hustle and bustle of city life. It was also an idyllic setting in which to indulge in hedonistic fantasies.

Roman aristocracy flocked to this adult playground and built stunning residences, including those of Nero’s mother and his aunt, Domitia. Baiae would also become their final resting places—allowing Nero to consolidate power while expanding his real estate empire.

Ultimately, the area’s splendor would be claimed by the sea when volcanic and seismic activity caused much of Nero’s playground to sink underwater.[5] 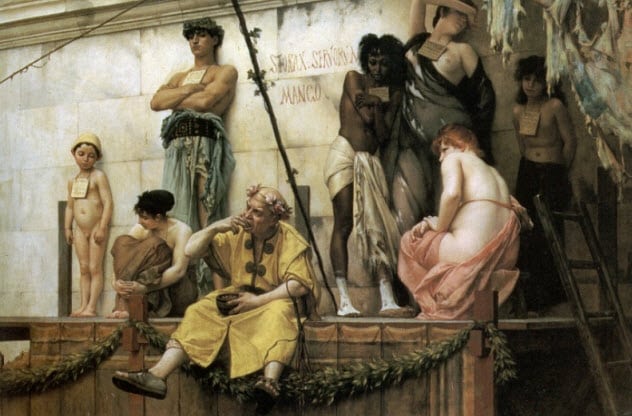 The price of fame often comes at a steep price. While most royals surrender their anonymity to the public spotlight, Nero took a different approach. He wore costumes.

Although he fancied himself an accomplished actor and musician (he wasn’t), Nero took method acting to a whole new level. The Roman historian Tacitus, who lived during Nero’s reign, chronicled his emperor’s new clothes this way:

There was peace abroad, but a disgusting licentiousness at home on the part of Nero, who in a slave’s disguise, so as to be unrecognized, would wander through the streets of Rome, to brothels and taverns, with comrades, who seized on goods exposed for sale and inflicted wounds on any whom they encountered.[6]

Nero’s boorish behavior might be attributed to youthful folly, but it continued to escalate with impunity. On one occasion, however, he received a taste of his own medicine. A Roman senator gave the disguised despot a severe beating before realizing the imposter’s true identity. As a result, Nero began surrounding himself with beefy bodyguards while on the prowl. 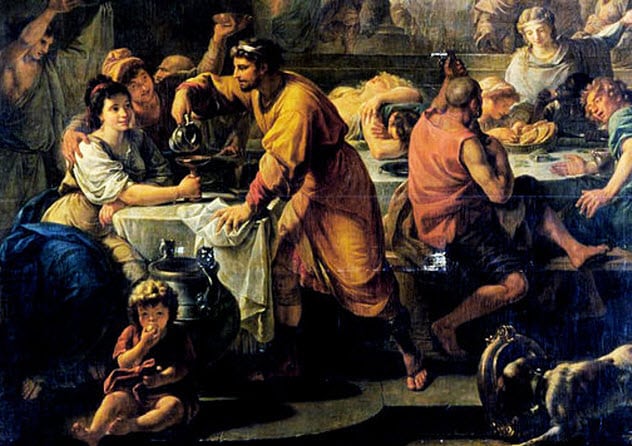 It’s been said, “Variety is the spice of life.” Especially for Nero. He decided to mix things up—a lot.

In AD 64 during the Saturnalia (festival of the god Saturn), Nero married a former male slave named Pythagoras in which the emperor assumed the role of the bride. Tigellinus, Nero’s favorite prefect in the Praetorian Guard, performed the marriage ceremony with all customary rituals, including a bridal veil, wedding dowry, and candles.

3 He Married A Eunuch 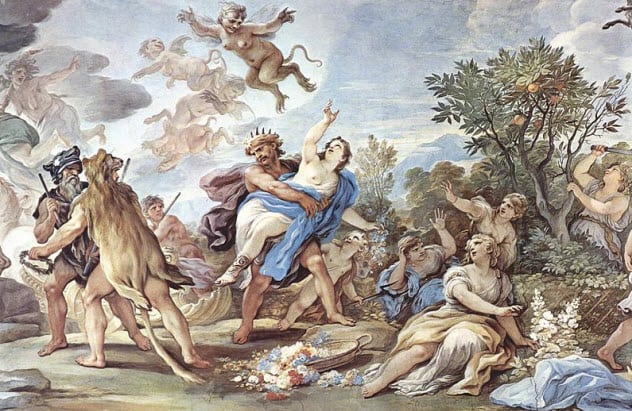 Nero wed a young boy named Sporus, whose appearance supposedly bore a striking resemblance to his former missus, Poppaea Sabina. Adhering to the common practice of the times, the emperor had the adolescent castrated so that his youthful looks wouldn’t change. Nero enhanced the transformation by dressing his bride in women’s attire befitting of a Roman empress and referring to Sporus as “Sabina.”

Unlike many of Nero’s companions, Sporus never fell out of favor and stayed with Nero until the bitter end. Vitellius, one of Nero’s successors, planned to humiliate the royal eunuch by sacrificing him in a re-creation of the mythological tale, The Rape of Proserpina, at a gladiator show. However, Sporus escaped the spiteful plot by killing himself instead.[8] 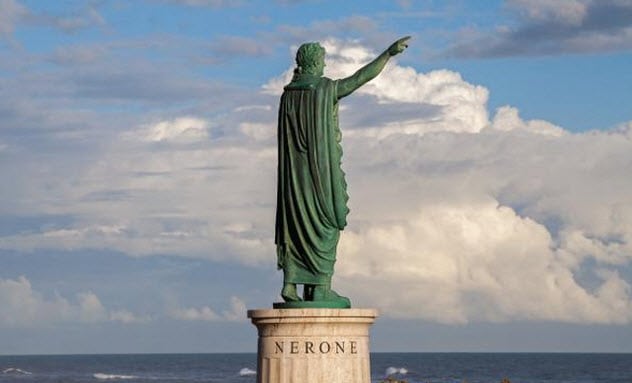 Despite a well-earned reputation as a sadistic psychopath, Nero actually had surprisingly high approval among the masses. He enjoyed particular support in the eastern provinces, where he was embraced as a benevolent ruler and patron of the arts.

Moreover, he drew praise in Rome where he initially lowered taxes, allowed slaves to bring complaints against their masters, and eliminated capital punishment. Although it’s widely believed that he torched the capital to make room for his Domus Aurea, he eventually rebuilt residential districts with buildings made of brick and colonnades to shelter residents from the Sun.

The depletion of imperial coffers and high taxes ultimately proved ruinous as Nero saw his popularity wane. Over time, the increasing spread of Christianity further sullied Nero’s name, fueled no less by accusations that he personified the Antichrist.[9] 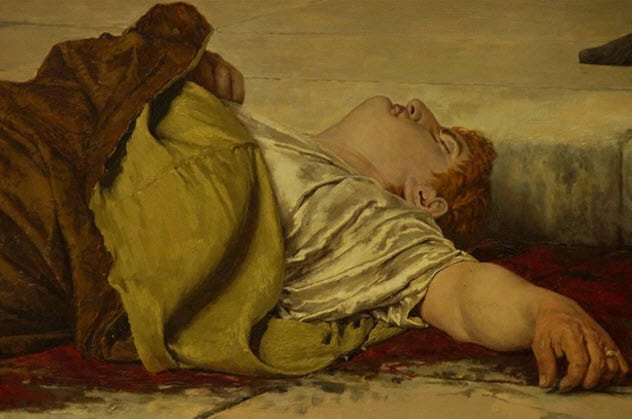 By early June in AD 68, Nero faced rebellion on multiple fronts. And when the Senate finally declared him a public enemy, he quickly descended into panic mode.

He considered fleeing to a safer harbor. But after losing the protection of the Praetorian Guard, he took refuge at a villa on the outskirts of Rome. Suetonius describes in detail how the emperor ordered his remaining loyal companions (including his beloved eunuch) to dig a grave as “he wept and said again and again: ‘What an artist the world is losing!’ ”[10]

With the walls closing in, Nero prepared himself for suicide . . . until he lost his nerve. He then begged one of his servants to assist him and finally succumbed to wounds from a dagger. Fittingly, Nero’s death at age 30 also put a blood-splattered end to nearly a century of Julio-Claudian rule.

Christopher Warner is an actor and freelance writer and has written for numerous publications and websites across multiple genres, including World War II Quarterly, Fairways + Greens, and Portland Monthly. www.warnerbrotherproductions.org

Read more fascinating stories about Nero on 10 Stories About Nero More Shocking Than Fiction and 9 Reasons Caligula And Nero Were Saner Than You Think.