As another week nears its end, it is time to take a look at some of the noteworthy stories with a hefty dose of weirdness. Click here if you want to catch up on last week’s list.

In the world of animals, this week we have a beluga spy, a three-eyed snake, and even an alleged Yeti sighting. People draw penises on the ground and eat bananas in protest. Meanwhile, scientists solve a decades-old computer puzzle and attempt to find the remains of Leonardo da Vinci.

10 Yeti In The Himalayas 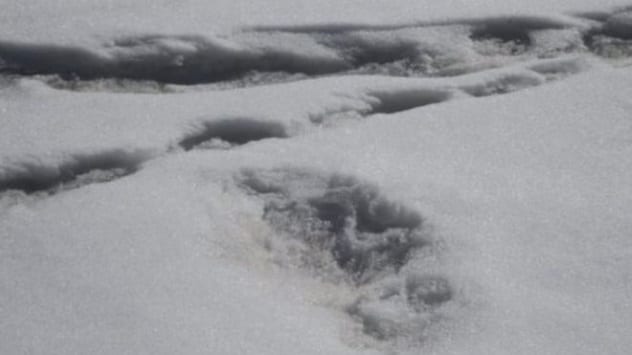 The Indian army shared on social media several pictures alleged to depict footprints of the Yeti.

According to the online post, the army presented its six million followers with “mysterious footprints” found by a mountaineering expedition team at Makalu Base Camp in the Himalayas. The footprints measure 81 by 38 centimeters (32 x 15 in). Soldiers actually made the discovery on April 9 but decided to wait until they’d compared it to previous reports of Yeti activity. In the end, army officials decided it was time to go public in order to “excite scientific temper and rekindle the interest.”[1]

Suffice to say, many met the claims with skepticism and derision. This includes the Nepalese Army, which asserted that the prints simply came from the Himalayan black bear. The footprint is elongated because the bear does not put its hind paw completely over the print of the front paw. It places it slightly behind, thus creating the illusion of a single, long footprint.

In reply, the Indian army said that they had turned over the evidence to “subject matter experts” and will await new developments.

9 The Power Of The Willy 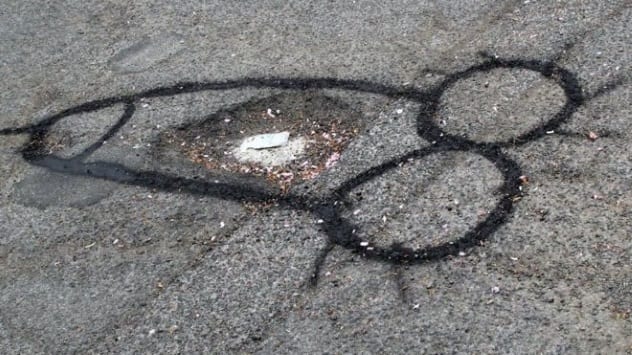 The people of Middlesbrough in North Yorkshire, England, showed us the trick to getting potholes fixed quickly: Draw penises around them.

The Fane Grove area of the city has had potholes for almost two years. Last week, an anonymous resident adorned them with phallus-shaped graffiti. A few days later, they had been patched, and the graffiti had been removed.

A spokesman for Middlesbrough Council claimed that the repairs took so long because they are performed on a priority basis determined by the risk they pose to motorists. However, since a road-mending team was already in the area, it was also able to fix the Fane Grove potholes.

At least one resident was not buying this story. Local Brad Nicholson attributed the quick repairs to “the power of the willy.”[2] 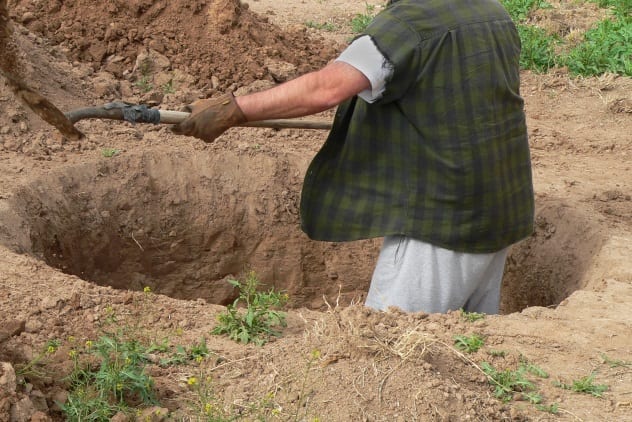 A man in Mexico had to be rescued after becoming trapped in a tunnel that he had dug under his former partner’s house so that he could spy on her.

Authorities from the town of Puerto Penasco made an interesting house call. A woman found her ex-boyfriend on her property, inside a hole that he’d dug over the course of last week. At first, she heard various noises but assumed they came from cats. As the sound intensified, she decided to investigate, and that is when she discovered that her former lover had spent several days burrowing a tunnel so that he could lie in hiding and spy on her.[3] The woman had ended their 14-year relationship because he was too jealous. She also had a restraining order against him for domestic violence.

The 50-year-old man required assistance in order to get out of the hole. He was severely dehydrated and seemingly intoxicated when he was released from his underground jail. Subsequently, he was taken to real jail. 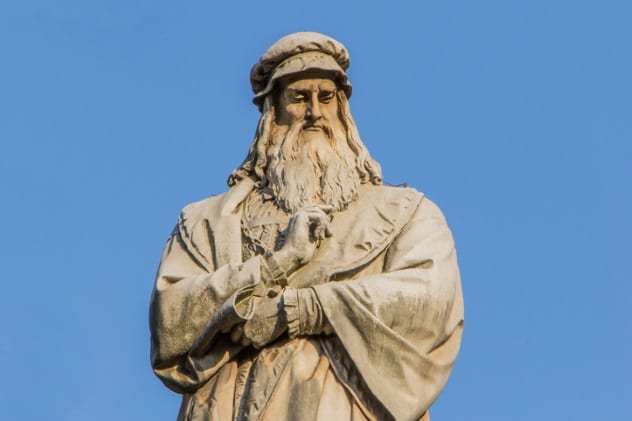 This week marked 500 years since the death of Leonardo da Vinci. Two scientists are eager to find out if a relic purported to contain the Renaissance Man’s DNA can help us identify his final resting place.

Alessandro Vezzosi and Agnese Sabato, both expert scholars on da Vinci, obtained a lock of hair which could have belonged to Leonardo. For a long time, it has been in a private collection in the US, but this week, it was featured for the first time in an exhibition dedicated to the polymath in his hometown of Vinci. Obviously, its credentials are in doubt, but it also comes with documents which seem to attest to its provenance. Besides putting it on display, the scientists also attempted to collect a DNA sample from the hair.[4]

We are not sure where Leonardo’s remains are buried, but they are thought to be located in a chapel in Chateau d’Amboise in France. This DNA sample, if genuine and viable, could be compared against the bones to check for a match. 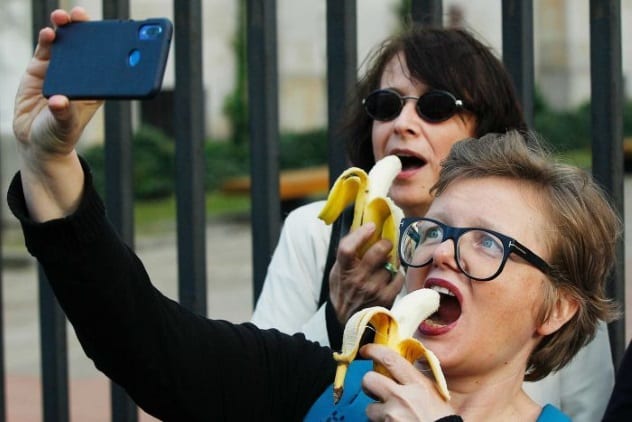 The people of Poland have taken to eating bananas in protest over the removal of a popular artwork due to alleged censorship.

The 1973 video “Consumer Art” by influential artist Natalia LL had been a mainstay at the National Museum in Warsaw until last week. That is when new museum head Jerzy Miziolek had it removed shortly following a summons to the Ministry of Culture.

The video shows a young woman eating a banana with great pleasure. It criticized the food shortage during communist Poland, but Miziolek believes that it “could irritate sensitive young people.”[5] Protesters see the move as censorship instituted by a conservative government. Miziolek denied these accusations and said that “creative changes” were necessary due to the limited space of the gallery.

Many people took to social media and posted pictures of themselves eating bananas to object the removal of “Consumer Art.” Several hundred of them even staged a protest in person on Monday. They all gathered in front of the museum and ate bananas, and some wore the peels on their heads.

5 A Case Of Meth-taken Identity 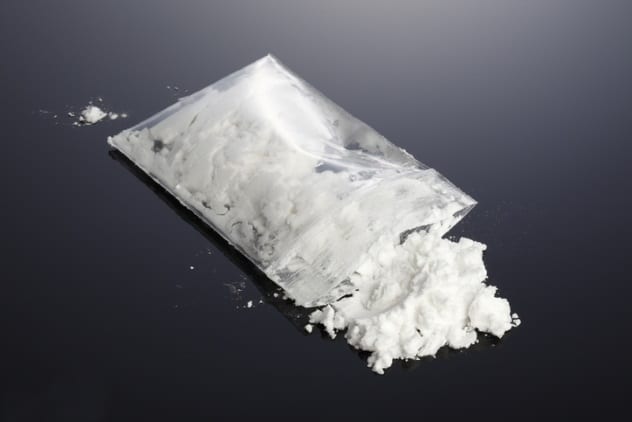 An elderly couple from Melbourne, Australia, called the police after taking delivery of the wrong parcel, which happened to contain 20 kilograms (44 lb) of methamphetamines worth approximately A$10 million ($7 million).

The couple was not expecting a package but signed for it anyway. Inside, they found bags of white powder. Although they did not realize the full significance of the strange delivery, they still called the authorities.

Detectives launched an investigation after assuring the pensioners that they had done nothing wrong and were not in trouble. They executed a search warrant on another house in the nearby suburb of Bundoora, where they found another 20 kilos of meth.[6] A man named Zhiling Ma was taken into custody. The investigation is still ongoing, and it is not clear at this time if this was the location where the couple’s package was supposed to be delivered. 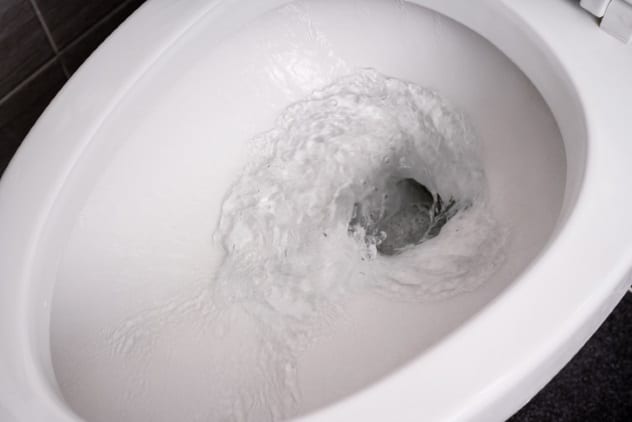 In a show of tremendous spite, a man from Pennsylvania allegedly flushed the ashes of his grandparents down the toilet after his mother kicked him out of the house.

Thomas Wells had briefly relocated from Pittsburgh to McKeesport to live with his mom. Last September, she asked him to leave. Although the 33-year-old complied, he supposedly committed an act of malice before doing so. He went into his mother’s bedroom, where she kept the ashes of her parents, took the box with the ashes, and emptied it inside the toilet.[7]

The mother found out about Wells’s actions in February from another relative, and she went to the police. The man stands accused of two charges of corpse abuse and one charge of criminal mischief.

Wells denied any wrongdoing. However, his mother said that he later threatened to do the same with her remains after she dies.

3 Defection On The High Seas 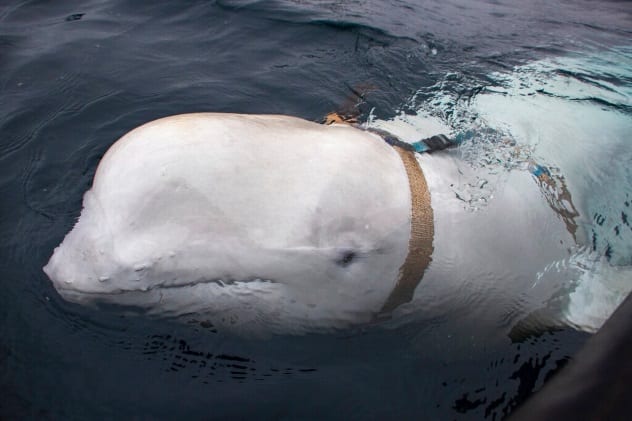 A beluga whale that showed up in the cold waters of Norway is suspected of being a Russian spy after being found wearing a harness with a camera mounted to it.

A fisherman found the marine mammal last Friday. It had a harness that said “Equipment St. Petersburg” in English. People have speculated that it came from a military training facility in Russia. Whether it escaped or was released is still a matter of debate. Given the language on the harness, it is possible that the beluga swam all the way from St. Petersburg, Florida, although the chances are remote.

Russian authorities have not commented yet, although one Russian analyst downplayed the military connection. Instead, he believes that the beluga whale was wearing a harness so that zoologists could track it.[8]

The supposed spy is really friendly and has spent most of the last few days swimming in the harbor of a hamlet called Tufjord. It is used to human attention and will come when called and even lets people pet it. It has become somewhat of a celebrity in the region, as locals claim it has “defected” to their side. For the moment, the beluga’s future is still unclear. Experts have advised people to stop feeding the animal so that it may learn to forage on its own and, perhaps, even join a pod of belugas.


2 A Blast From The Past 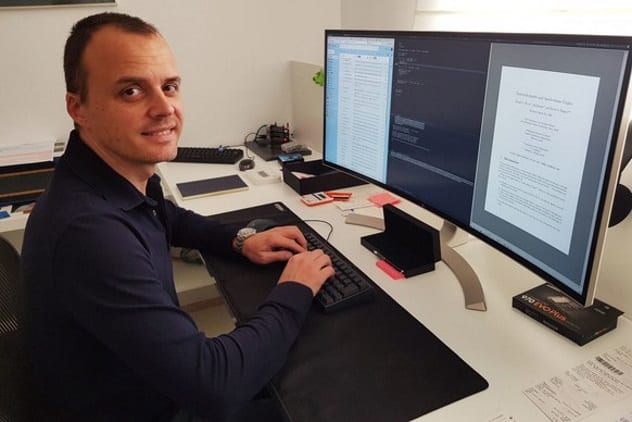 A programmer from Belgium managed to solve a cryptographic puzzle which unlocked a time capsule 15 years ahead of schedule.

Back in 1999, the Laboratory for Computer Science at MIT commissioned a time capsule from famed architect Frank Gehry. Inside were 50 objects which celebrated computer history, with items donated by Bill Gates, Tim Berners-Lee, Bob Metcalfe, and other luminaries. It was locked using a puzzle designed by cryptographer Ron Rivest, who estimated that it would take approximately 35 years to solve.

This April 15, almost exactly 20 years later, a programmer named Bernard Fabrot cracked the riddle. It was not designed to be difficult, just time-consuming. Basically, it involved running a squaring operation 80 trillion times and using that number in a different equation.

The puzzle relies on sequential operations. This means that each new answer builds upon the previous one, so you cannot use multiple computers at the same time in order to solve it faster. Even so, Rivest underestimated how powerful and advanced computers would become in the following decades. Fabrot found the correct answer in less than four years using a home computer and free software.[9]

Strangest of all, Fabrot finished just weeks before another team. A group of computer scientists had developed a cryptography project called Cryptophage, and they thought the puzzle would make a perfect test run. They called MIT to let them know that they should be finished around May 10, only to find out that the Belgian programmer had already reached out a few days prior.

The capsule will be opened on May 15. 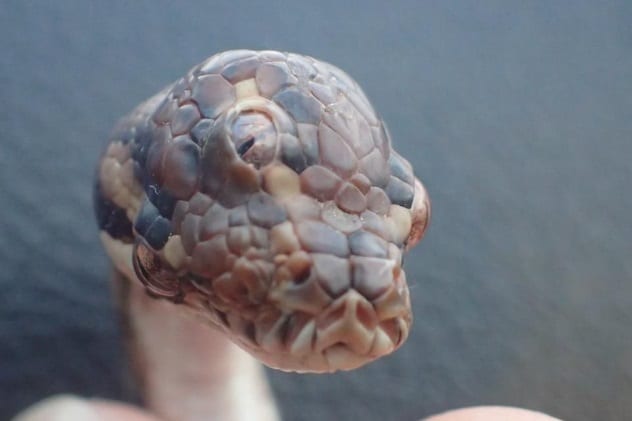 Wildlife authorities from Australia reported the discovery of a snake with three eyes.

The baby carpet python was found in March on a highway in Northern Australia, near the town of Humpty Doo. X-ray scans revealed that the snake did not have two heads that formed together but rather a third eye socket in its skull.[10] All three eyes appeared to function normally. Snake expert Professor Bryan Fry believed that the deformity could have been the last bit of a twin that had been absorbed during development.

The Northern Territory Parks and Wildlife Service took charge of the unique reptile. Wildlife officers nicknamed him “Monty Python,” although people were more inclined to think of Game of Thrones, which has the Three-Eyed Raven.

Sadly, Monty died a few weeks after it was found. While cause of death is undetermined, the reptile was struggling to eat due to its malformation.