Some biologists adore spiders. It’s why they visit the same arachnid for 40 years and why the world recently saw the first trained spider. This spider love has yielded quite a bit of knowledge, but there’s still so much more to learn.

These creatures have more mysteries than they have legs. Inexplicable fossilization, producing milk more nutritious than a cow’s, and spinning graphene-laced silk are just some of the things spiders do that confound scientists. Then there was the spider that received death threats, causing the cops to show up.

10 They Eat More Than Humans 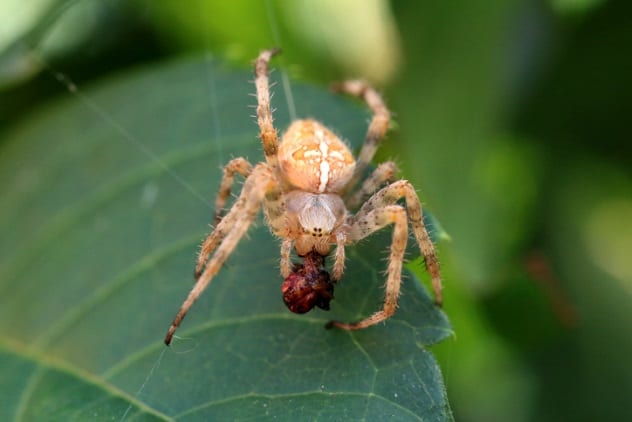 To arrive at that number, the team first had to know the biomass of the global spider population. They determined that the planet has 25 million metric tons of spiders. After calculating how much food was required per body unit, the total consumption was something between 400 and 800 million metric tons.

Considering that the arachnid menu is 95-percent insects, the study proved that spiders are very useful. They keep insect populations in check, including species that count as pests. The smorgasbord of insects fosters a large population of spiders which, in turn, provide plenty of food for arachnid-eating animals. 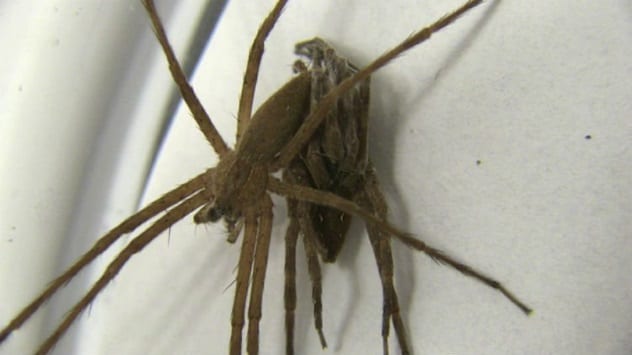 Unlike other spiders, the nursery web spider (Pisaurina mira) does not use its silk to catch prey.[2] Suggestive of their name, the females use their spinning ability to make nests. The males use it for something else entirely—to tie females up during mating. No other spider species use webbing as a restraint. This seemingly kinky behavior was proven in the laboratory as a smart survival move.

In 2016, researchers divided male nursery web spiders into two groups. One half retained their spinning ability, while the other had theirs blocked. Enter the females. After mating, all the males who could not spin were dead. Those who managed to tie up their mates got out alive. Apparently, the females start out with fertilization on the brain. Once the female is fertilized, her mate now looks more like baby food for her developing eggs. Unsurprisingly, the males evolved longer legs and an instinct for bedroom bondage. 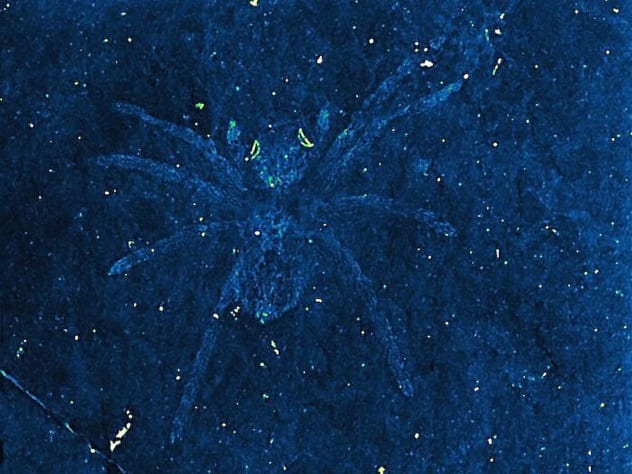 As a rule, spiders do not make good fossils.[3] Their soft bodies decay and disappear quickly after death. On rare occasions, amber holds well-preserved specimens. In 2019, however, paleontologists released news of a remarkable find. While working in South Korea, they came across 11 spiders fossilized in shale. The number of arachnids was reason enough to celebrate, but something else made this batch special. Despite being 110 to 113 million years old, the eyes of two specimens still glittered.

Inside the eyes of nighttime animals, spiders included, are structures called tapetums. They act like mirrors, reflecting light from the back of the eye through the retina. This kicks night vision up a notch. The Korean eyeballs marked the first time tapetums were found in the fossil record. Their shape, resembling tiny canoes, might help scientists to place the valuable fossils on the spider family tree. But another mystery remains. Nobody knows how the spiders, let alone their tapentums, became preserved in the shale. 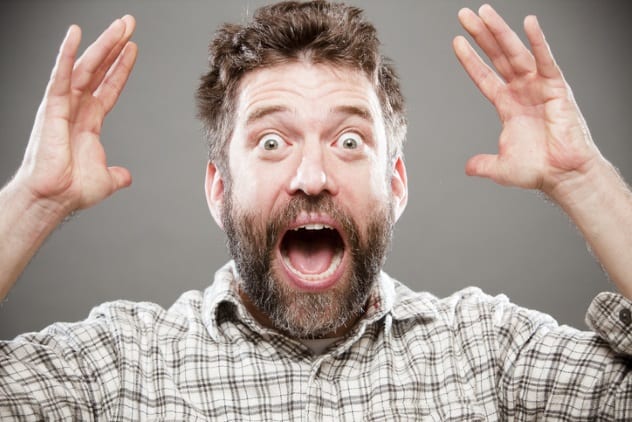 On New Year’s Day in 2019, a passerby heard something disturbing.[4] Walking by a house in Perth, Australia, the person heard a toddler screaming. Then a man’s voice yelled repeatedly, “Why don’t you die?” Concerned over the child’s safety, the witness placed an emergency call to the police. The cops arrived, expecting to find domestic violence. Instead, they found a very scared man.

Apparently, the homeowner, who has an intense fear of arachnids, had encountered a spider. The “Why don’t you die?” death threats were directed at the spider, which the police reported was the only one at the scene that suffered any injuries. Although the species wasn’t revealed, the man wasn’t behaving entirely outside of reason. Some of the most venomous spiders in the world crawl around in Australia. This is not the most encouraging fact for somebody suffering from arachnophobia. 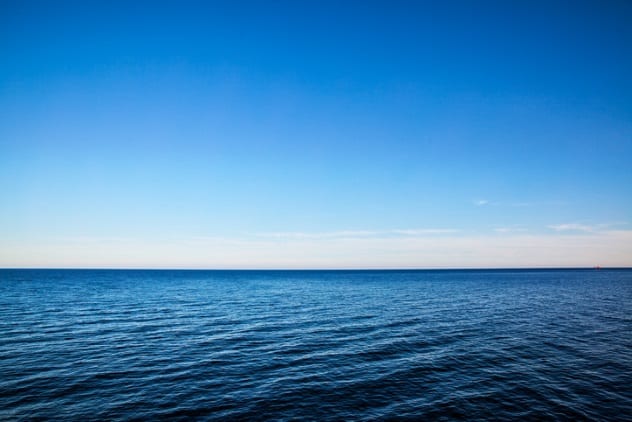 The Australian trapdoor spider (Moggridgea rainbowi ) only lives on Kangaroo Island.[5] When a study found that it belonged to the same family as South African trapdoor spiders, it was thought that their lines separated when Africa broke off from the supercontinent Gondwana 95 million years ago. However, tests showed that the two cousins diverged around two to 16 million years ago. This also ruled out the possibility that humans brought them to Australia. The only remaining theory suggested that the trapdoors floated to Australia.

At first, it seemed unlikely. After all, a massive stretch of ocean sits between Kangaroo Island and South Africa. A strong clue supported the epic journey, however. Related trapdoors were found on the Comoros islands, a few hundred miles away from South Africa. These arachnids probably made a shorter journey in the same way—on a raft. Had a colony been washed out to sea on a piece of floating land, their lifestyle could not have been more perfect. Trapdoor spiders do not need a lot of habitat. They make a burrow near their mother’s nest, seal it with a protective “door,” and live there their whole lives. 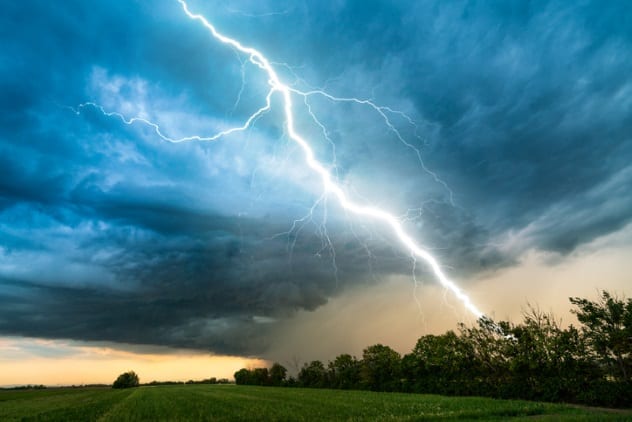 Sometimes, spiders make silk parachutes and fly away.[6] Although this ballooning had been well-studied, it was not until 2018 that it became clear that electric fields both prompt the behavior and provide the lift even without wind. Long suspected to play a part was the atmospheric potential gradient (APG). This electric circuit exists between Earth and the ionosphere.

To confirm its effects, experiments in the laboratory exposed spiders to electric fields. When the artificial field was switched on, the spiders went ballooning. Remarkably, electrostatic forces were sufficient to push the tiny travelers on their way. This is the same stuff that makes hairs stand up after a balloon rubs somebody’s head. When the field was switched off, the spiders landed.

It is believed that the spiders sense electricity in the air with hairs called trichobothria. This could explain why they fly more during thunderstorms, which act as a booster for the APG. Indeed, the arachnids have been recorded drifting 4 kilometers (2.5 mi) high and traveling for hundreds more. 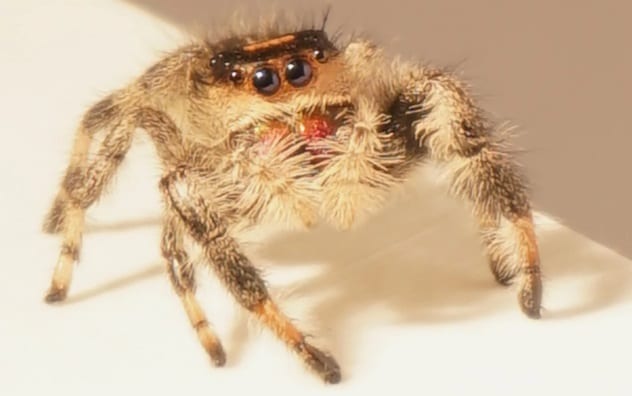 She may not be an obedience champion, but Kim the spider is the first arachnid to leap when scientists demand it.[7] Teaching her where and when to leap was hard, and the rest of her four-member class failed to grasp what the humans wanted. Graduating in 2018, Kim’s hopping between platforms taught researchers more about what happened when a group called jumping spiders, well, jumped. In particular, the team was curious about how leaps differed depending on the distance, direction, and reason for the jump.

Kim was a regal jumping spider, known for long-distance jumps used to catch dinner, travel, or to escape danger. She was filmed performing 15 jumping tasks and then studied in slow motion. The footage also enhanced a 3-D version of Kim, created to better understand the physical processes involved. The most surprising find was that takeoff burdened the spider’s legs with a force of up to five times her own body weight. Kim also anticipated her destination and adjusted her leg positions accordingly, leaping high for long distances and low for nearby platforms. 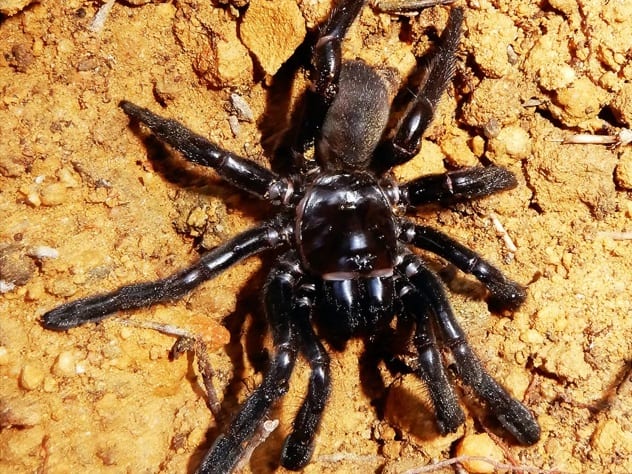 It is hard to imagine, but in 2016, one spider turned 43 years old.[8] Known as Number 16, she was a trapdoor spider that lived in the wild. (The picture above shows an example of her species.) In 1974, researchers found her as a baby in Australia’s North Bungulla Reserve. For decades, they visited her nest as part of a long-term research project. Number 16 lived through Watergate, the first IBM personal computer, and the advent of the World Wide Web. She also died as the world’s oldest known spider.

Her corpse was never found, but when scientists arrived at her underground nest in 2016, they did not need to find it. The gruesome signs were there. Her burrow’s protective lid had been pierced by a wasp. This type of wasp was known to be parasitic, depositing eggs inside a spider, which is then eaten alive by the insect’s larvae. Despite her violent end, Number 16’s life was not for nothing. Her decades-long contribution to the behavioral study of trapdoor spiders was significant.

Spider silk is old news, but what about spider milk? Scientists observed something odd in 2018.[9] They noticed three odd behaviors while observing a jumping spider called Toxeus magnus. The species was not known to form colonies, but the researchers found nests stuffed with grown juveniles. Also, newly hatched babies never left the nest, and the mother never brought them food. By all logic, they should have starved. After mysteriously surviving for 20 days, the kids began foraging outside of the nest.

The third behavior was most unusual. Every now and again, one juvenile would attach itself to the mother. The female did not seem to mind and was downright tender with them. A closer look revealed that the mother provided her offspring with milk and continued to suckle them long after they began finding food for themselves. The milk’s content was also surprising. Apart from containing fat and sugar, it was also four times richer in protein than cow’s milk. Given as an excretion, the exact nature of the fluid remains unknown, since it is not milk in the “mammal” sense. 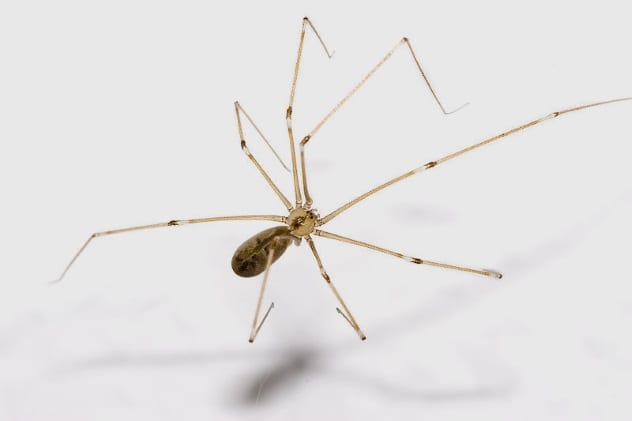 When it comes to tensile strength, spider silk is as strong as alloy steel.[10] This makes it stronger than most artificial materials. Recently, scientists from Italy made it even tougher. They found a way to get spiders to spin graphene-containing silk. The process was so simple that a child could do it. A group of spiders from the Pholcidae family were spritzed with water containing graphene flakes or carbon nanotubes. The next time the critters started to weave, their silk was analyzed. Incredibly, it passed the tests as the toughest fibers ever recorded.

This “carbon-fiber” was a mixture of silk and graphene or nanotubes. Beyond confirming the inner structures, scientists remain stumped about how the whole thing works. It was unlikely that the silk was somehow coated with the substances. As a coating, neither could have enhanced the silk’s strength so significantly. The spiders probably ingested the laced water and somehow incorporated it into their silk. That way, the graphene/nanotubes ended up near the middle of the fibers, an arrangement that made the fibers super strong.