It has been said that one cannot dig a hole in Rome without encountering the past. But the same rich heritage makes the whole of Italy a smorgasbord for archaeologists.

New discoveries about famous landmarks are always great. Yet, the richness of ancient Italy rests in the forgotten moments of ordinary life. Celebrations, workshops, and graves left behind insightful and often tragic new details from the lives and deaths of ancient Italians. 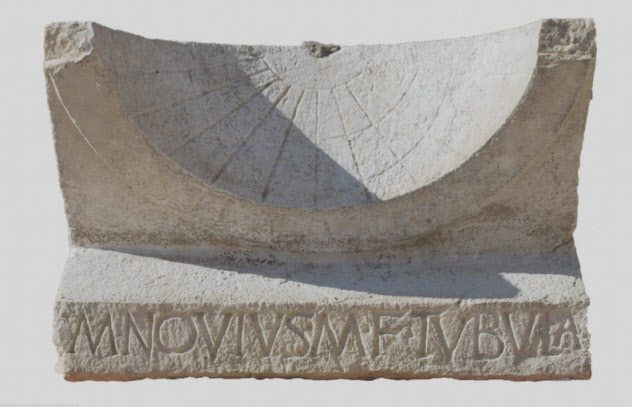 Ancient devices that kept time with sunlight are called sundials. An unusual limestone version was found in 2017 during excavations of Interamna Lirenas, a Roman town southeast of Rome.

The artifact was found facedown in the town’s amphitheater. It was mostly intact and measured 54 x 35 x 25 centimeters (21 x 13 x 10 in). Within a hollow, 11 engraved lines marked the hours and three intersecting curves predicted the winter and summer solstices as well as the equinox.[1]

Only about 100 of its kind exist, but this one joined an exclusive handful—those with inscriptions. The sundial laid bare a political piece of the town’s history. Carvings revealed that one Marcus Novius Tubula commissioned the artifact to mark his election to office. He then gifted it to the town, likely placing it in an elevated and important place.

The inscription also helped to identify his post as a previously unknown plebeian tribune of Rome. What archaeologists find more amazing than its rarity and story is that the sundial survived for 2,000 years. It even escaped looters who stripped the town for building material during medieval times. 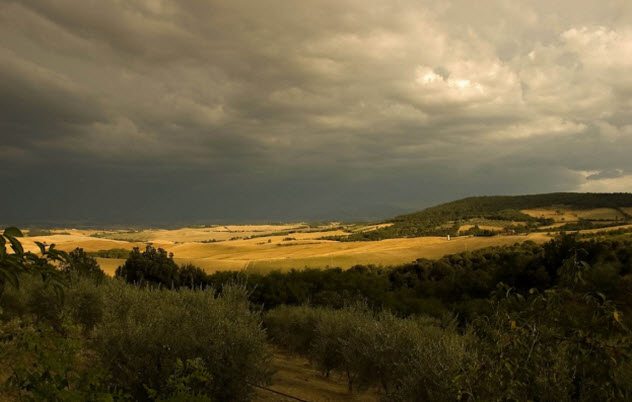 An ancient Italian village called Poggio Civitate once existed in Tuscany. The centerpiece is a fantastic pavilion 52 meters (170 ft) long. Dating to the seventh century BC, the open-air pavilion ironically produced things like roof tiles.

In 1983, something was found inside that shattered the romance that people usually feel toward Tuscany’s past. Between the remains of slaughtered animals were two arm bones. They belonged to a newborn infant or two separate babies.

The grisly collection grew when a partial pelvis surfaced in the same building. Found in 2009, it also belonged to a child who died at birth. The workshop laborers could have been lower class or slaves whose dead offspring would not have received elaborate funerals—except a carelessly treated arm bone was found elsewhere in Poggio Civitate.[2]

Somebody swept the house of a wealthy homeowner and brushed the debris against a wall. In 1971, the newborn’s arm was discovered inside the garbage pile. If the child belonged to high-status parents and not their servant, it could suggest that, at the time, babies were not mourned as much as adults after death. 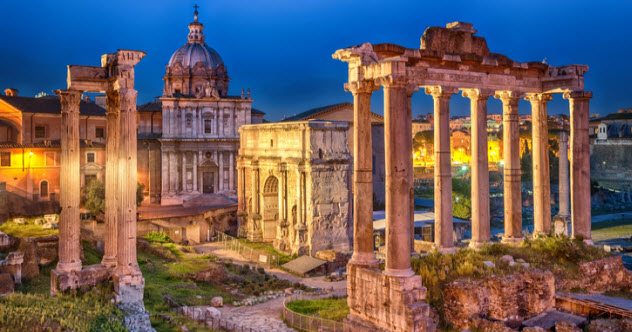 Rome is known as one of the world’s oldest cities. According to legend, it was founded in 753 BC by the twin brothers Romulus and Remus. At one of the city’s landmarks, the Roman Forum, archaeologists dredged up a new date. Whereas the previous one was anchored in myth, physical artifacts backed up the conclusion that Rome is 200 years older.

In 2014, a dig inside the Forum found the remnants of a wall from 900 BC. Made from tufa limestone, it came with ancient pottery and grains. The ceramics provided the rough date for the wall’s construction. The site is known for remarkable finds from antiquity. Archaeologists were busy excavating one—the Lapis Niger—when they found the wall.

The latter may be the earliest sign of when Rome was settled, but Lapis Niger (a stone shrine) predates the Roman Empire by hundreds of years. Previously, the location also produced the lex sacra. It is a stone carved with Rome’s oldest-known Latin inscription (565 BC).[3] 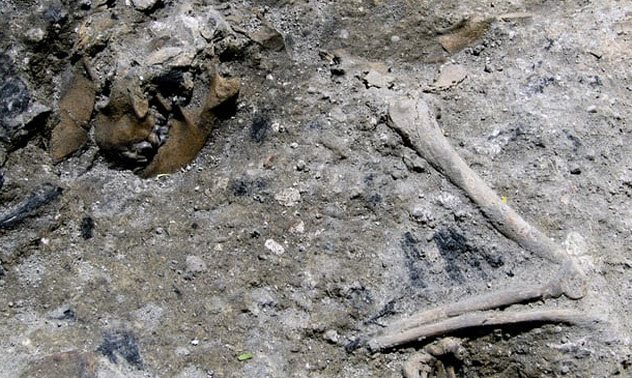 In 2017, construction workers drilled a hole near Rome’s ancient Aurelian walls. The work was meant to lengthen the metro line but instead unearthed a rare scene. While examining the shaft, archaeologists came upon a building. Sometime during the third century, it collapsed under a weighty fire.

What caused the blaze will likely remain a mystery, but the heat hardened and preserved details to a rare degree. Investigators found normal artifacts such as a leg belonging to a table or chair, a pair of tables, and wooden structures that were possibly handrails.

Then there were the more exceptional finds. Pieces of wall revealed frescoes with a reddish flavor. Black and white tiles once shaped a mosaic on the second floor. The scorched wooden ceiling, drab as it sounds, is a unique find in Rome. Together, the artifacts allowed a frozen glimpse at how somebody lived and the kind of home they built.[4]

The house is thought to have belonged to an aristocrat or perhaps been an extension of the nearby ruins of barracks. The fire appeared to have taken one life. The skeleton of a dog was found crouching among the debris. 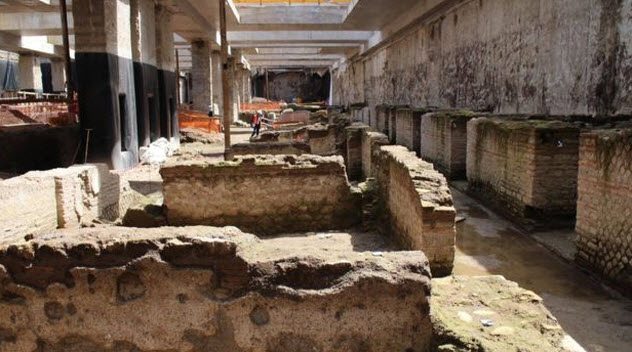 A year prior to the discovery of the scorched house, metro construction workers were also halted by the echoes of old Rome. But this time, they found several housing structures. The ruins totaled 39 rooms and a corridor 100 meters (328 ft) long, covering an area of 900 square meters (9,700 mi2).

The site most likely housed members of the Praetorian Guard. These soldiers were dedicated to the emperor’s personal safety and were also his private military force. The Praetorian Guard started with Augustus, the first emperor of Rome. The new barracks, however, would have been occupied by Emperor Hadrian’s bodyguards.

Dating back to the second century AD, the site is not only impressive for its size. The ruins also yielded floor mosaics, coins, jewelry, and human remains. Since it was found near four additional Roman barracks, it confirms that the area was a military neighborhood.[5]

The discovery will not interfere with the metro’s construction. Instead, the two will blend into a modern station with archaeological displays. The first of its kind in Rome, it will be located near the Colosseum. 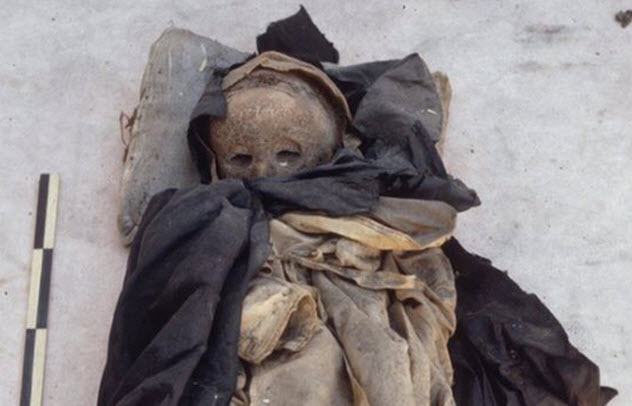 The Basilica of San Domenico Maggiore in Naples received royals and nobles after death. But perhaps the most famous is the mummified body of a toddler. Its haunting face is pitted with holes that scientists long believed were caused by smallpox.

The 500-year-old mummy was hailed as the earliest proof of the disease from the Italian Renaissance. Decades later, scientists examined the child again. Their hope was to confirm the results from the 1980s. The oldest European case came from 17th-century Lithuania. If the remains tested positive, the baby would push European smallpox back by a century.

They released their findings—and the real cause of death—in 2018. The new study found no trace of smallpox, but it did find a virus that still kills thousands every year—hepatitis B.[6]

The ancient two-year-old may no longer be the prize catch for those looking for the true age of smallpox. Instead, it shows that the deadly hepatitis B virus has plagued humans for at least 500 years, although some experts believe that it started thousands of years ago. 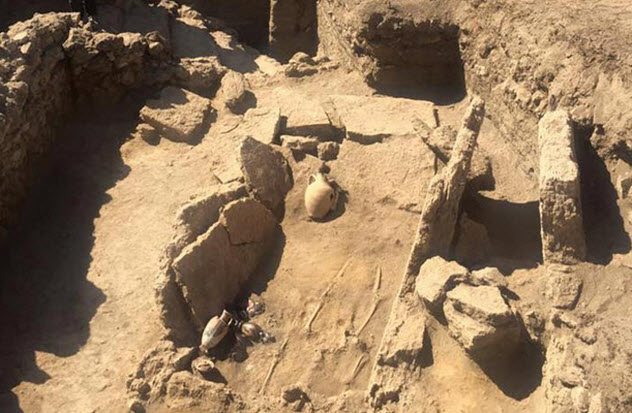 Pompeii is infamous for its demise in AD 79 when it was destroyed by the eruption of Mount Vesuvius. However, the city did not always belong to the Romans. In 2015, archaeologists were working near the Herculaneaum Gate when they made an accidental find.

Although the area had been bombed heavily during World War II, a grave survived intact. It belonged to a Samnite woman in her late thirties. When she died in the fourth century BC, Pompeii belonged to her people.

The Samnites were an Italic tribe who conquered the city a century earlier from its founders, the Oscan people. The latter descended from Stone Age groups from Italy’s Campania region. Pompeii was built during the sixth or seventh century BC. The Romans took it by force in 80 BC.[7]

The grave’s pristine condition suggests that Roman citizens knew of its presence and left it respectfully alone. The tomb is valuable because it hails from a time period with few details. The grave’s amphorae were not local, meaning that the Samnites traded extensively across the peninsula.

Researchers are hopeful that they will learn more about this tribe, its women, and funeral practices once the site is fully analyzed. 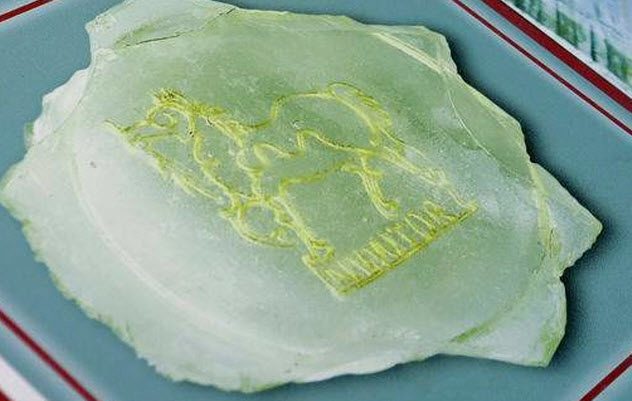 To fix the 2,000-year-old Circus, authorities launched a six-year renovation project. During the process, which ended in 2016, new finds surfaced at the well-known landmark. Excavations laid bare public latrines and seats as well as marble remains of an arch that once stood 10 meters (33 ft) high.

It also helped researchers to document ancient renovations that occurred at different times, especially after the great fire in AD 64. Artifacts included the inevitable hoard of coins (about 1,000) and a valuable glass fragment.

The shard came from a goblet and held the only evidence that horses entertained spectators. It bears the gold image of a victorious horse. Its name, Numitor, was written below the prancing animal. Numitor, which likely raced along the vast oval track centuries ago, will become the new logo of the Circus Maximus.[8] 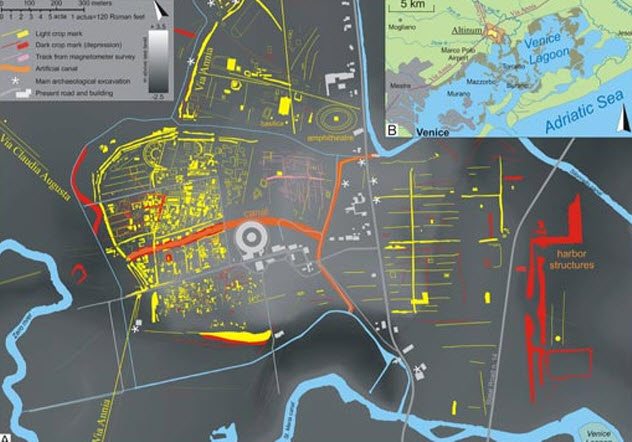 An aquatic city once stood on the Italian mainland. Located some distance away from Venice, Altinum was built in the first century BC and was known from historical references and a few excavations. When a drought arrived in 2007, archaeologists took the chance to fully map Altinum for the first time.

Hidden beneath modern crops, any plants on top of ruins displayed more water stress. Those growing above Altinum’s canals fared better. In this manner, archaeologists traced the outline of every building using aerial photography.[9]

A sophisticated Roman city emerged. The researchers discovered the foundations of streets, residential areas, large monuments, and city walls with gates. There was also a harbor and canals.

Scholars believe that the residents’ knowledge of thriving in a lagoon environment saved them and helped to spawn Venice. The famous canal city is spread over several islands near the Adriatic Sea. It arose from a blend of migrant streams from different coastal settlements. Altinum is definitely one of these “ancestor cities.”

Inhabitants fled Altinum during the fifth to seventh centuries AD to escape barbarian attackers. The invaders struggled in the aquatic nature of the islands, and Altinum’s people survived to contribute their skills to the successful colonization of the lagoon. 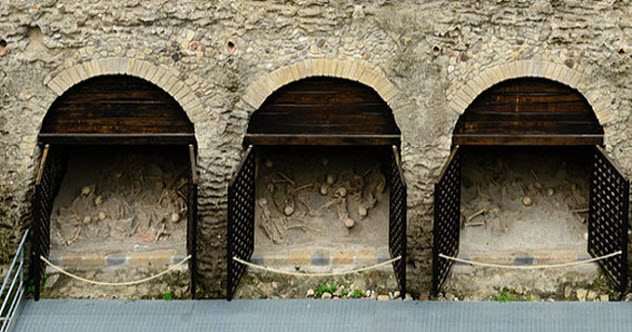 The town of Herculaneum was a resort getaway for wealthy Romans. Unfortunately, it was also Pompeii’s neighbor and suffered the same devastating destruction. Before the final moment, 300 men, women, and children took shelter in Herculaneum’s boathouses near the beach. They remained there for nearly 12 hours and probably thought they were going to survive.

But then Vesuvius released superheated ash and gas that sped down its slopes and into the shelters. Gruesomely, everyone was instantly cooked. One merciful aspect was revealed when researchers studied the skeletons again.

Unearthed in the 1980s and 1990s, the more recent study found people in relaxed poses, nothing that spoke of fear or pain. This meant that they died so quickly that they never realized it. But the injuries were stomach churning.

First, they died of heat shock. Temperature leaves a typical pattern on the body. Damaged bones and tooth enamel suggested that the victims were hit with a blast of 500 degrees Celsius (932 °F). The intense heat vaporized their flesh, fractured some skulls, and blew holes into others. Ironically, the pyroclastic surge did little damage to the town.[10]

For more revealing stories about Italy, check out 10 Ominous Italian Mysteries That Are Still Unexplained and 10 Chilling Facts About The Secretive ‘Ndrangheta Mafia.