Fashion has changed quite a bit from our hunter-gatherer days, when the most fashionable thing someone could wear was anything at all. What we wear now has less to do with adapting to the environment and more with self-expression and what everyone else is wearing. Modern fashion has been a long time in the making, and as we’ve mentioned before, it has gone through some weird phases on the way.

Amid that reminiscing, though, we forget that many modern fashion trends are just as bizarre as those from our past, some even more so. As fashion drastically moves from the expressive to the experimental, the most baffling thing about these ten bizarre modern fashion trends is that many people are still willingly paying to flaunt them. 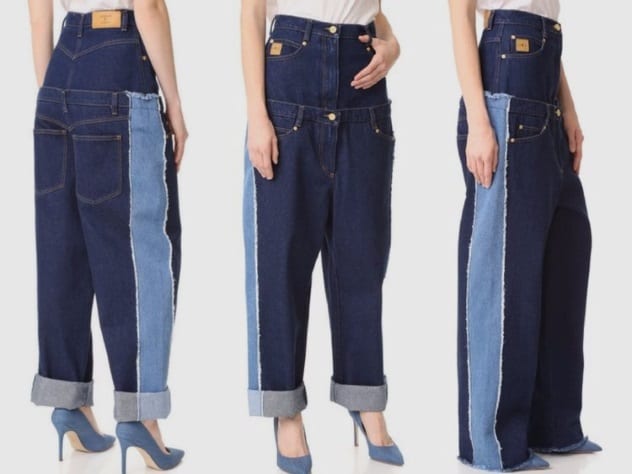 Fashion trends change as often as the seasons (literally), but there’s one thing that has never gone out of style since their invention over a century ago: the trusty jeans. You may see variations going in and out of style every now and then, but the overall denim look has been consistent throughout the decades, and for good reason, too. They’re durable and comfortable and go with almost anything else you have in your wardrobe.

That opinion is clearly not shared by the London fashion house Natasha Zinko, though, who decided that the number of waistbands on a traditional pair of jeans—one—was too low. The creatively named double jeans have two waistbands to make up for that, including zip locks and extra pockets for the extra waistband below the usual one. If your first reaction is, “That’s stupid; why would anyone buy that?” we’re with you. People are definitely buying them, though, as they sold out a few days after entering the market.[1] 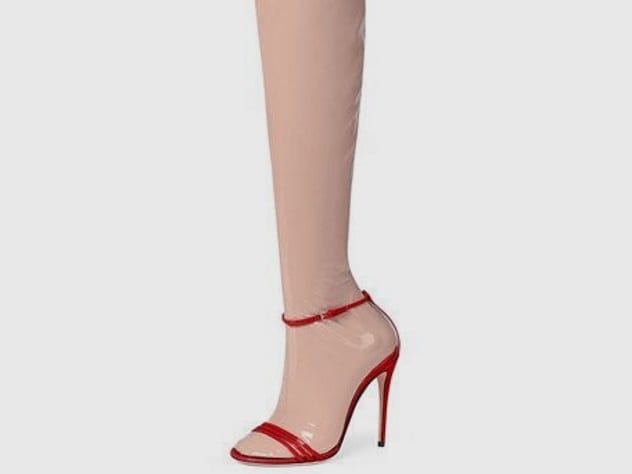 Despite persistent attempts by fashion designers and lifestyle magazines, socks have never been the most fashionable clothing item you can make a style statement with. The most you can do with them is vary their length and experiment with the prints, though even then, they’re almost always worn as an accessory to the overall look.

That didn’t fly too well with certain designers, though, who believed that socks need to be much more than a forgotten part of the wardrobe. In a misguided and over-the-top attempt to achieve that, they came up with latex socks.[2] These socks aren’t just made with latex but also come in colors that would be right out of a nightmare, like skin color and red. These are not to be confused with usual latex clothing used for various fetishes, which is actually a much more justified use of the material.

If you’ve ever bought anything from Gucci, you can guess that these aren’t cheap; you’d have to shell out about $1,400 to get your hands on them (including the shoes they’re combined with). That’s if you really want to, of course. These latex socks aren’t just novelty items, either; celebrities have been spotted wearing them in public. 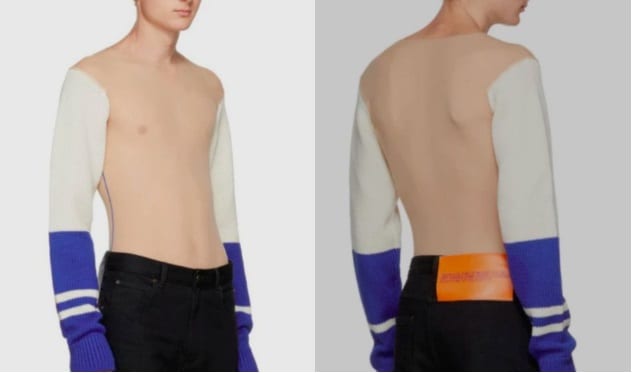 Clothes for summer and winter are clearly segregated in their own categories, and then there are some things, like denim, that can be worn during both the seasons. We have sweaters, overcoats, and scarves for the winter and half-sleeve shirts, shorts, and T-shirts for the summer. Calvin Klein, however, was having none of that arrangement and came up with the crossover sweater sleeves.

It’s a kind of a sweater that you can wear during summer, though in truth, it doesn’t fall into any category of clothes we currently know of. It looks like just the sleeves of a sweater, but if you look a bit closer, you’ll realize that there’s a thin fabric to cover the torso with, because we wouldn’t want to be ridiculous now, would we?

If you really want to, you can achieve the look it offers at home, though Calvin Klein insists that theirs is the best version of sweater sleeves that money can buy, which is why they’ve priced it at $2,165.[3] 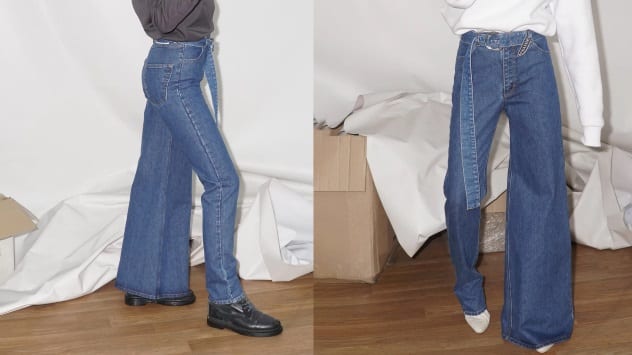 Most people may have no problem with the essential design of a pair of jeans, though there have been many efforts to radically redesign them for some reason. A Ukrainian brand, Ksenia Schnaider, has made the news in the past for using denim for many of their new experimental designs, including denim “furs” and demi-cut jeans. None of those are as bizarre as their latest one, which has created quite a buzz on the Internet: the asymmetrical jeans.[4]

Not happy with the fact that pants are usually made with two equivalently sized sections, the asymmetrical jeans are meant to be a new-age variation to that apparently outdated design. Another goal is to put Ukraine on the global fashion map. They may well have succeeded at that, too, as quite a few mainstream fashion publications are touting these jeans as the next big thing in fashion. 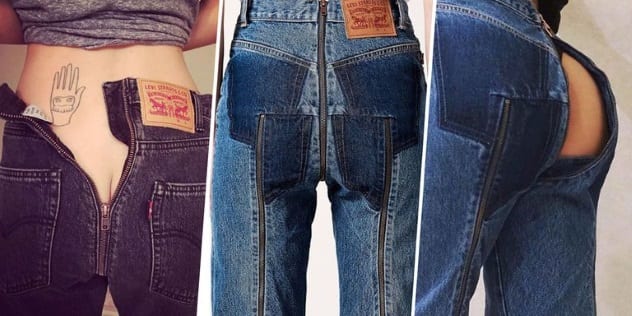 The more time we spend researching for this article, the more it dawns on us that fashion designers just aren’t happy with the way jeans are. We don’t know if it’s because they don’t have anything to do anymore, or if there’s a secret ongoing war on denim in high fashion circles that we have no idea about, but a lot of weird modern fashion trends are aimed at completely changing how we make our jeans, and we’re not sure why.

Take bare butt jeans, which are exactly what the name suggests they would be. Creatively called the “cheekiest fashion trend of our times” by some people on the Internet, they’re exactly like your regular pair of jeans, except that you can unzip them from behind as well as the front.[5] In case your butt is too covered up for your comfort, they offer the option to undo that and make a bold fashion statement while you’re at it. 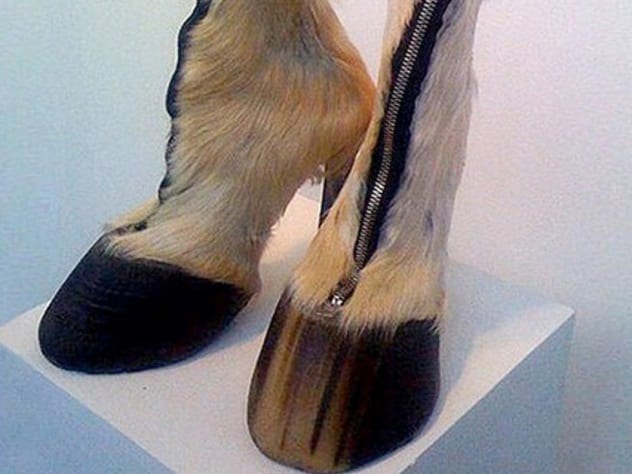 The horse is a truly majestic creature and has played a big role in the rise and fall of many civilizations in human history. It’s fast, it can endure almost any environment you throw at it, and it’s largely okay with humans riding it. But have you ever looked at a horse and thought, “I need shoes that look exactly like their hooves?” We haven’t, either, but the designers who came up with the hoof heels certainly have, and they decided to do something about it.

Shoes that look like horse hooves have been a trend for quite some time now.[6] You can check out reviews of happy customers who’ve bought them—and whose number is definitely more than one—on Amazon right now. Classy versions of them have also been seen at a few international fashion showcases.

While there have been hoof-shaped shoes in some cultures in the past (like the Manchus in China), they looked far more tasteful than the ones we have right now. You know a modern fashion trend is truly bizarre when its historical counterpart was less ridiculous. 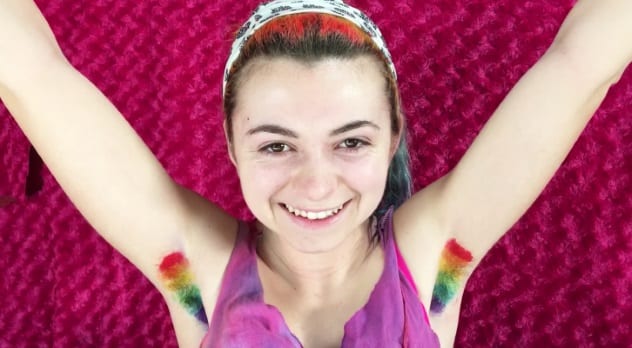 Opinions on armpit hair have been varied throughout our history, mostly in the sense that we never really had any opinion on it. It’s generally considered to be socially appropriate to keep the armpits clean and shaved now, but for a long time, no one really cared. Thanks to this bizarre new trend, though, it’s now back into popular conversation.

Women and some men around the world have taken to dying their armpit hair various colors.[7] While it may have started as a form of expression in the LGBT community, when it was limited to the colors of the rainbow, it’s far too widespread and popular at this point to be attributed to a single cause. There’s even an Instagram page dedicated to sharing the best of colored armpits from around the world. In case you’ve been looking for instructions on how to get into it, there are plenty of online tutorials you can refer to. 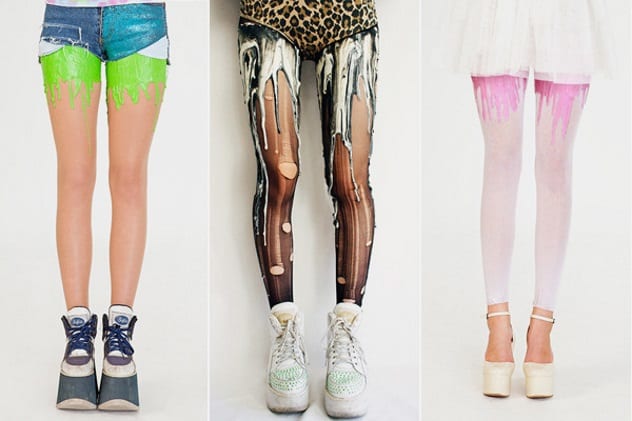 Shorts are one of the best clothing options for the summer, as that’s generally the only time you can comfortably wear them without freezing to death. They also work with almost anything else and, if done right, can make for a casual yet chic fashion statement. But have you ever looked at a pair of shorts and thought, “It’d be great if there was some paint dripping from under there?” Sure, there may be someone somewhere who finds that attractive, but for the most part, it’s not something anyone ever asked fashion designers to come up with.

Despite their very specific appearance, melting tights are widely available for purchase.[8] The paint look is achieved by latex, and to be honest, if you ignore all the looks of curiosity you’re sure to get if you wear them in public, some of the designs may even end up working for a quirky, over-the-top setup.

Judging from the reviews, quite a few people have bought them and are happy with their purchases. You can, too, as long as you’re really committed to carrying that look off. 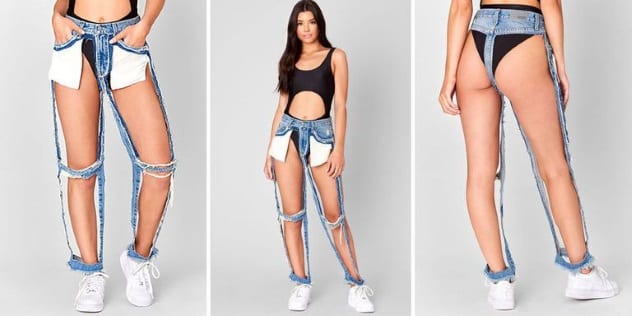 Ever looked at jeans and think that they’re too intact or cover too much surface area? If your answer is “yes,” you’re in luck. In another instance of fashion’s ongoing war on denim for no apparent reason, they’ve come up with the thong jeans.

Originally showcased at 2017’s Amazon Fashion Week in Tokyo, thong jeans are exactly like jeans, except with just about everything other than the waistband, pockets, and zip fly torn out. They wouldn’t even be called “jeans” if there was literally anything else we could call them.

Thong jeans have already entered the market through an LA-based brand called Carmar Denim, and to everyone’s surprise, they sold out within days.[9] Some people think that they could really accentuate an outfit if someone can pull them off, though if you can pull these off, you could probably pull anything off. 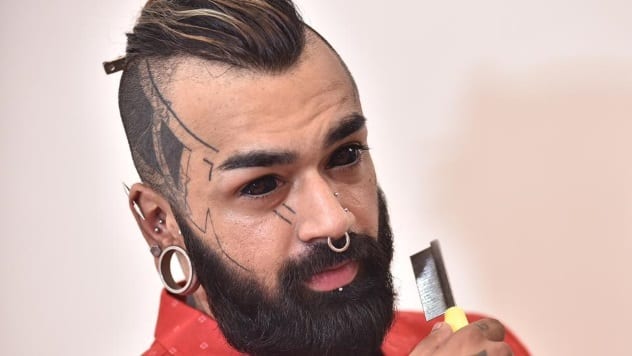 Humans have been getting tattooed ever since we first found a natural pigment and a tool to inject ourselves with it. Tattoos still hold an important place in many cultures around the world. Even for those without any cultural reasons to get them, tattoos are an immensely personal thing.

One tattoo trend that has been gaining traction lately, however, is not just bizarre but is also putting the health of many unknowing people around the world at risk. Known as eyeball tattooing, it’s exactly what it sounds like. They take a needle and inject the eyeball with ink, and it’s as uncomfortable as it looks. While there are safe ways to do it, like going to a surgeon, it’s also being done by unqualified tattoo artists with no surgical experience.[10]

While many people are now getting into it due to the trend having recently gone viral, we’d advise caution if you’re about to jump on the train, as there’s a real risk of losing your eyesight if anything goes wrong.

Read about more crazy fashion fads on 10 Depressing Fashion Trends We Hope History Will Never Repeat and Top 10 Most Bizarre Shoes in History.