Almost nine million people live in London, and a staggering 31.5 million visit the city each year. But for the most part, these people only see a fraction of London’s bizarre and beguiling history. If we dig a little deeper, then we find that beneath the city’s streets are some of the most gruesome and shocking discoveries of recent times . . .

10 A Super-Evolved Mosquito In The Underground 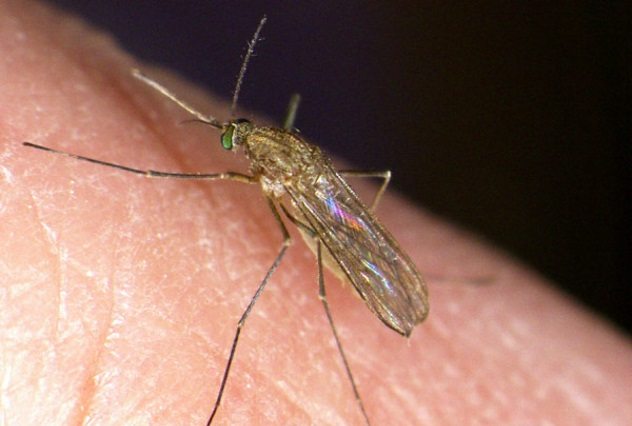 Aboveground in London, the mosquitoes behave just like those in any other big city: mostly feeding off birds, hibernating in winter, and requiring a lot of space to reproduce. But venture down to London’s underground rail network, and you might find a much scarier mosquito on the prowl. First documented just after World War II, the London Underground mosquito evolved in the specific conditions of the subterranean tunnels and trains, meaning that it developed a taste for human blood. In addition, this species doesn’t need to hibernate in winter and can reproduce in close proximity.[1]

These super-mosquitoes have since been studied by doctoral students, who found that the little bloodsuckers had evolved at an alarming rate. So next time you’re on the “tube,” be wary of that faint buzzing around your head. 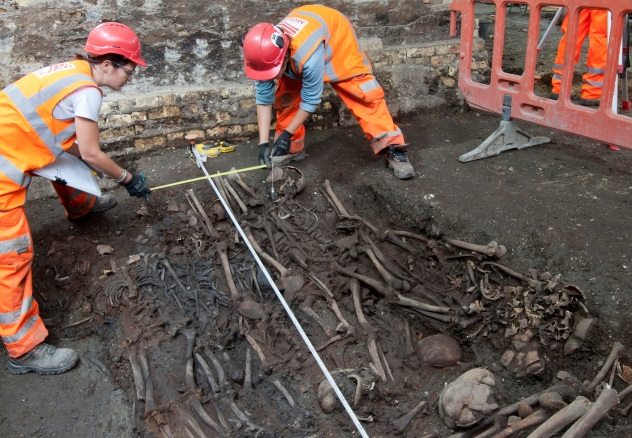 In the middle of the 17th century, London was ravaged by the bubonic plague, with its victims succumbing to a gruesome and pus-filled death. In just two years, a staggering 15 percent of the population of England’s capital had died from the plague, and they all had to be buried somewhere.

The body count was increasing so fast that makeshift graves and mass burial pits had to be dug all throughout the city and its surrounding area. Enough time has passed since the bodies were buried that there is no accurate record of where all the burial pits are, meaning that every time a new building project is begun in the city and digging commences, a grisly reminder of London’s diseased past is likely to be unearthed.[2]

8 The Ghost Of An Egyptian God 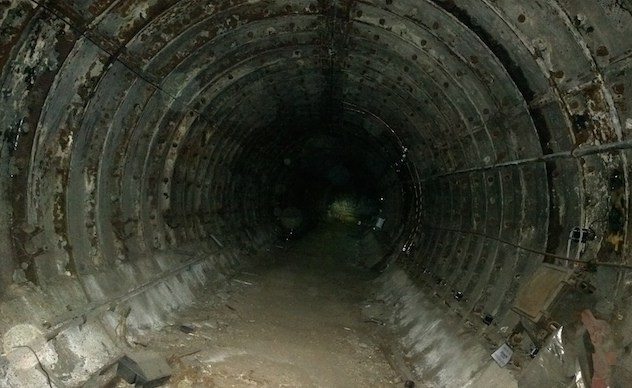 Whether you believe in ghosts or not, the number of reports surrounding this ghoulish mystery is enough to make you think twice about heading into the Underground after dark. A strangely high number of people believe that the London Underground’s abandoned British Museum stop has been haunted by the ghost of Egyptian god Amun-ra since the 1930s.[3]

Many people wouldn’t pay this story much mind, but the unexplained disappearance of two women from Holborn Station in 1935 made many doubters sit up and take note. Rumors of a secret tunnel between the station and the museum’s Egyptian Room have stoked fears that the wailing sounds and infrequent sightings of a loincloth-clad figure are more than just fiction. 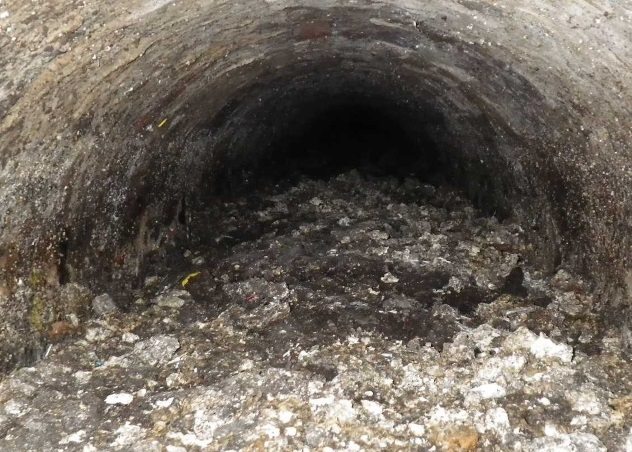 The area of Chelsea in West London is one of the more desirable postcodes in the city, but in 2015, a vast and unsightly mess was removed from beneath its streets. A lump of congealed fat and wet-wipes had accumulated in the sewer system over a period of years until it had grown to 40 meters (130 ft) long and weighed in at an astonishing 10 tons. It is believed that the greasy mountain was a product of the restaurants in the local area pouring cooking oil down their drains, combined with a huge number of wet-wipes appearing in the sewage system. The ungodly mixture stuck together and grew and grew as it attracted even more waste.

The so-called “fatberg” wasn’t likely to sink any ships, but it did cost the local council the titanic sum of £400,000 to remove it and repair the broken sewer.[4] 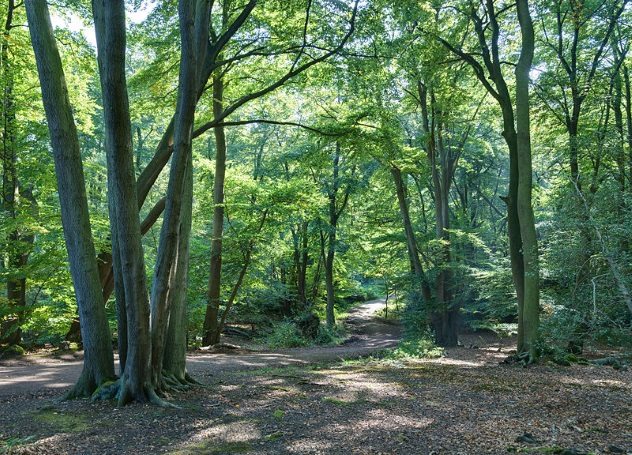 The gangsters of London’s East End were renowned in the 1960s for their ruthless, violent nature and their penchant for making competitors “disappear.” Although the cockney crime scene isn’t as explosive as it once was, there is still enough dodgy dealing going on to keep the police more than occupied. The favorite place of London gangsters to dispose of their victims has long been Epping Forest, in the northeast of the city. Its sheer size, combined with its dense foliage and secluded nature, means that it is incredibly hard for the authorities to police. The result is that no one really knows how many bodies are buried there, and new corpses are discovered at an alarming rate.

In fact, the Corporation of London, the body which is responsible for the forest, says that it has no way of stopping the cadavers from being dumped there.[5] Despite the possibility of making a gruesome discovery, Epping Forest remains a popular area for dog-walkers and ramblers, although they might want to tread carefully if they are heading off the beaten track. 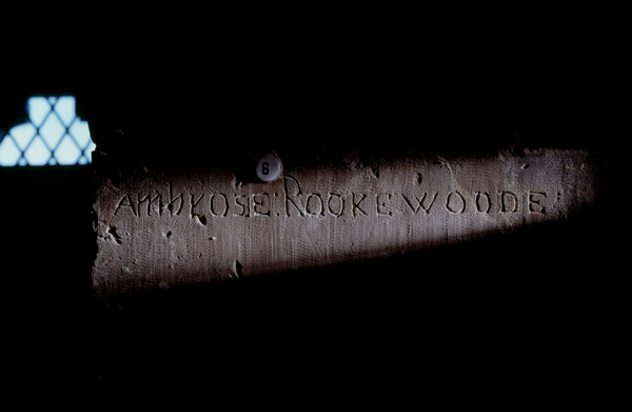 The Tower of London was built in the 11th century. In its day, it housed high-profile prisoners such as Anne Boleyn, King John Balliol, and Guy Fawkes. Not only were many of those imprisoned eventually executed, but the Tower and its dungeon were also the scene of the torture of many of its prisoners. Medieval torture techniques favored by sadistic dungeon masters included being stretched on “the Rack,” with victims’ limbs being pulled agonizingly apart by ropes as they lay tied to this vile machine.[6]

All this pain and anguish drove many of the Tower’s inhabitants to scratch graffiti into its imposing stone walls, and their words can remarkably still be seen to this day. William Rame must have endured some real horrors to have been compelled to write, “The day of death is better than the day of birth,” in 1559. Similarly, the torture drove medieval prisoner Thomas Bawdewin to etch, “As virtue maketh life, so sin causeth death.” Both are chilling reminders of the brutality that once existed under the streets of London. 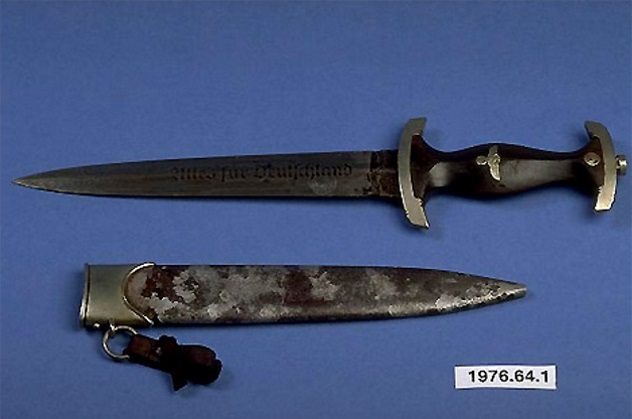 In the 1940s, the Blitz saw German bombers pound the streets of London with explosives night after night. The devastation caused by the bombs has long since been fixed up and built over, but some remnants of those terrifying days, as war engulfed the whole of Europe, still remain.

In 1976, a frightening reminder of the city’s past came to light as a Nazi dagger, engraved with “Alles Fur Deutschland,” was discovered in the River Thames.[7] To this day, it is unknown whether this artifact somehow fell from a German aircraft or was brought back from Europe by a victorious Allied soldier who later threw it into the river. Or perhaps there is an even more sinister reason why an enemy weapon was found in the heart of London . . . 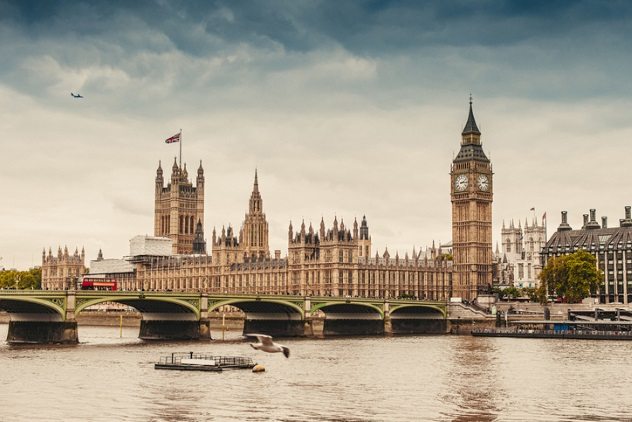 The Great Fire of London might be the most famous disaster in the city’s storied history, but there is another city-wide catastrophe which is often forgotten. The Great Stink of 1858 brought London to a standstill as unprecedented hot weather turned the flow of raw human waste into the Thames into a steaming river of extraordinarily foul-smelling sewage. The Sun was literally baking the feces, and the stench became so awful that the members of Parliament were forced to walk out.

The putrid smell of the Great Stink was the catalyst behind the incorporation of a new sewage system built into the banks of the river. However, the houses of Parliament had only recently been rebuilt after a fire in 1834, so they were designed to dump their waste straight into the river below, rather than into the shiny new poop-chute system. The solution to this problem was to install a series of pneumatic sewage ejectors, which use blasts of compressed air to propel the human waste of Westminster up to the newly installed sewage pipes just below ground level.[8] This system still functions today, meaning that if the s—t hits the fan in Parliament, that might not be as bad as it sounds.

2 A US Cargo Ship Full Of Explosives 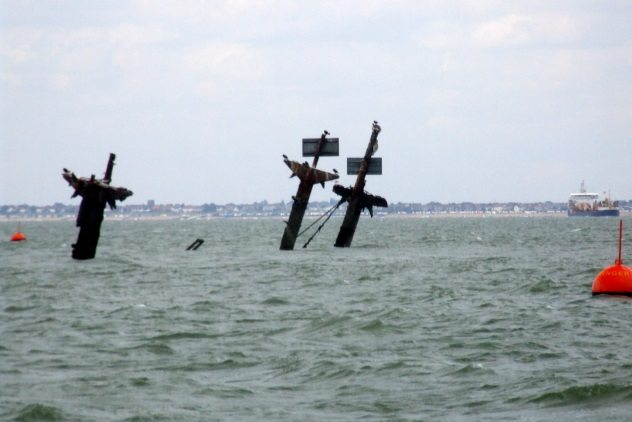 OK, this one might not technically be in London, but it is so (potentially) explosive that it had to be included. If you follow the River Thames from the city down toward the estuary where it joins the sea, you will spy three masts jutting out from among the gentle waves just off the shore. This is the wreck of the SS Richard Montgomery, a 134-meter-long (441 ft) cargo ship which ran aground during bad weather in 1944.

But the cargo of “Monty” wasn’t any ordinary cargo. The ship had arrived from the US to assist with the war effort, and as such, it was carrying a monstrous 1,440 tons of munitions, including very large bombs.[9] Experts have no idea if or when the deadly cargo could explode but have stated that if it does, it would cause a tidal wave, and all the windows in nearby Sheerness would shatter. The residents of Sheerness don’t live in fear, however; they’ve actually embraced their perilous hometown. The sign on the way in reads: “Welcome to Sheerness, you’ll have a blast.” 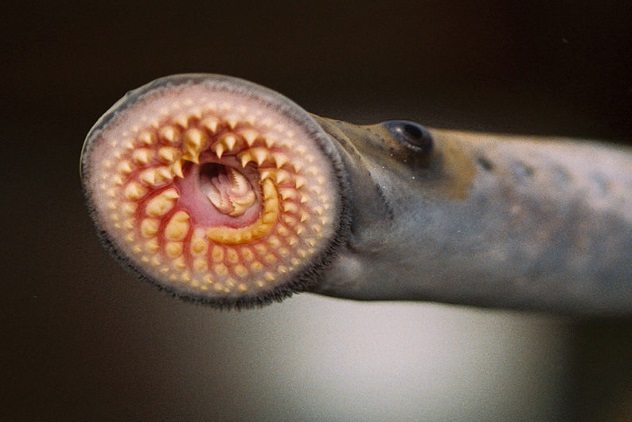 London has a long history of being polluted, from the smoke of the factories in the Victorian era to the petrol fumes of iconic black taxis today. But the 1960s saw a level of pollution in the River Thames so high that many of the creatures believed to reside in London were declared biologically extinct. That included the sea lamprey, an eel-like creature which latches onto larger creatures before sucking out their blood. The ghastly-looking lamprey, like sharks and crocodiles, has barely changed for millions of years. In fact, it existed at the same time as the dinosaurs.

Despite having been presumed extinct in the area, a sea lamprey was found in the river in the middle of London in 2009, with the shock discovery being made by a 13-year-old boy.[10] Fortunately for the young lad, the 38-centimeter (15 in) specimen he found was recently dead, although lampreys die once they have spawned, likely guaranteeing the presence of more of these ugly bloodsuckers lurking in the Thames . . .

David lives in West London, where he watches soccer and often stops to consider the fascinating history of the city which exists under his feet.