Horses can no longer be described purely as beasts of burden. These days, they are athletes, pets, and subjects of unusual studies. Researchers have found that horses can talk in symbols and hold grudges against people they have never met.

The hoofed wonders also wore zebra blankets for science and inspired the birth of movies. Even more surprisingly, their clones can now compete in the Olympic Games. 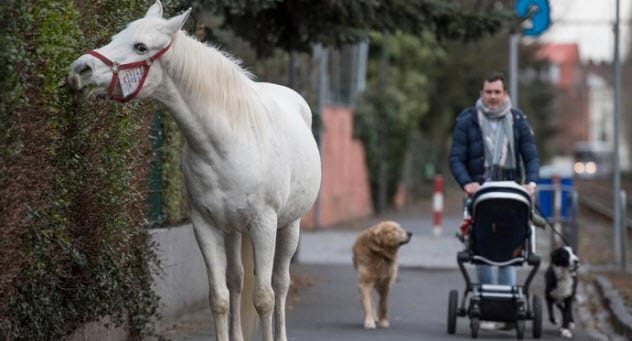 Frankfurt’s police are used to something very unusual—phone calls about an animal loose in the city. To be fair, the creature is a large Arabian horse and pedestrians often worry that she is lost or might bolt into traffic. The police never do anything and with good reason. They know Jenny well. In fact, the Arabian mare has taken her morning stroll through Frankfurt’s Fechenheim district for the past 14 years—without incident.

Many find it upsetting that she is by herself. However, those who dare to go close enough can read a card attached to her halter. It explains, “I’m called Jenny, not a runaway, just taking a walk. Thanks.”[1]

Despite the police assuring callers that the horse is a regular feature in the neighborhood, the owner faces a slew of criticism. Werner Weischedel often hears from strangers on social media that he is being negligent. However, an entire veterinarians union stands behind the owner and police. They dismiss the criticism, saying that the Arabian knows her way, walks leisurely, and appears very satisfied. They may not be all that peculiar, but this pair deserves special mention. Detective John Reilly and his horse, Trooper, were Central Park’s only mounted team. In 2019, Reilly reached 63 years old, the mandatory retirement limit.

Had it been up to Reilly, he clearly would have patrolled Central Park for a few more years. He and his faithful mount were a favorite of selfie-seeking tourists and those needing directions. Reilly had been with New York’s mounted unit for 24 years, but he rode Trooper alone in Central Park during the last decade.

The horse is part quarter horse, part Belgian, and around 15 years old. Trooper logged 10 years on duty, sporting his own department blanket and larger-than-normal police shield.

Coincidentally, Trooper had also reached retirement age. The patient creature went to a special farm that provides lifelong care for retired police horses, and officers can visit. There are no plans to assign the Central Park route to another single officer. Instead, Reilly’s spot will likely be taken by a group of mounted officers.[2] A team of scientists in Siberia wants to use the remains to resurrect the species. It could take a while, if ever, to succeed. However, the foal represents more than just having another species back on the planet. It could help scientists develop the technology to return more difficult extinct animals, notably the woolly mammoth.

The theory is that a living surrogate mare can carry a cloned foal to term without the need for genetic adaptation.[3] For now, a mammoth must be an elephant-mammoth hybrid to complete the pregnancy inside an elephant cow.

Unlike horses, mammoths and elephants are not closely related. The Siberian team, which boasts international scientists, claims that they only need a single living cell from the foal. It can be multiplied to create countless embryos.

The rest of the scientific community is not forthcoming with support. Ice age DNA is normally broken beyond repair into millions of bits. Also, finding a cell with a complete genetic code is close to impossible.

7 They Get Dressed As Zebras There are theories about why zebras need lines. Camouflage is an obvious pick—a herd of stripes makes individual zebras harder to spot by predators. Other theories suggest that the stripes aid social interactions or regulate their temperature. Another idea involved flies. For a while now, scientists have known that flies bother horses more than zebras for some reason.

In 2019, three groups of horses got new blankets. One group wore white, another donned black, and the third got saddled with stripy frocks. Researchers watched horse flies in action and gathered hours of data. The study found that the insects swarmed around horses and zebras without prejudice.

Even though the flies approached both species in roughly equal attempts, they landed three times as often on horses. Around zebras and the striped horses, flies seemed a little drunk. They bumped into the animals or just flew away. It would appear that one purpose of the striped hide is to confuse the bloodsucking pests.[4] In Norway, some horses do not wait for two-legged wonders to decide when they should wear blankets. In 2016, a small herd of 23 showed when they wanted a blanket put on or removed or whether they wanted to keep wearing one.

It was not always this way. Researchers designed a board with three signs. Using carrots as a reward, the horses were taught the meanings behind the signs. A horizontal stripe meant “I want my blanket,” a vertical bar denoted “take this thing off me,” and a blank symbol signified “I want to keep wearing my blanket.”

The animals were encouraged to touch the board with their muzzles. Amazingly, it took just two weeks of daily training lasting 15 minutes each at most. All 23 horses made their choices when asked to do so. They did not just thump their snoots at the board to get carrots. Every time, their answers sensibly matched with the weather. (When wet or cold, they wanted their blankets.)[5] In 2018, the Universities of Sussex and Portsmouth showed images to horses. This was not an inkblot test but photos of people who looked happy or angry. Horse lovers know that the animals can read human body language very well. The photos not only proved it but also that horses can hold an angry expression against somebody—even when that person did nothing upsetting.

The study took 24 horses and monitored their responses to the photos. Interestingly, the scowling faces increase heart rates and sparked negative reactions from the horses. Most of the animals also viewed the threatening pictures with their left eye.

A few hours later, the models arrived but kept their expressions neutral. When meeting the “angry” humans, the horses experienced faster heartbeats and turned their heads to keep the person in view with the left eye.

The animal ability to recognize a particular person’s emotions hours later has never been recorded before. Even more striking, they prejudged strangers from their photos, which altered the animal’s behavior when they met for the first time.[6] During the 1800s, the horse was the main way to get around. For this reason, one debate was alive and well: At any point, did a galloping horse lift all four hooves off the ground?

Leland Stanford, the founder of Stanford University, had racehorses himself. To settle the debate and understand equestrian locomotion (he wanted to make his animals faster), he hired a brilliant photographer. Eadweard Muybridge was tasked with the impossible—take photographs of a galloping horse.

The problem? The era’s exposure time was so long that a person having his photograph taken had to stand really still or risk being seen as a blur. Incredibly, to do the assignment, Muybridge invented a shutter that snapped shut within one-thousandth of a second.[7]

In 1878, he rigged a racetrack with cameras. A horse ran over trip wires and triggered a sequence of photographs. One of them proved that horses were completely airborne at one point. Muybridge took it further and created a device that allowed the images to be viewed in motion—essentially, the world’s first GIF and the inspiration for movies today. When a lot of money can be won, an injured racehorse is a bother. Illegal painkillers are nothing new in the racing industry, but regulators actively fight the practice. Meant to keep injured animals running, this inhumane treatment ends with the horse breaking down.

An unusual rumor started circulating around 2012. There was a painkiller being used by trainers that was 40 times more powerful than morphine—and it came from a frog. It took months before samples were confiscated and analyzed.[8]

Called dermorphin, it was made from the secretions of the waxy monkey tree frog. However, its widespread availability suggested that most was likely produced synthetically. The substance made horses euphoric, hyper, and unable to feel pain.

Dermorphin was also a performance booster. Several horses that tested positive had won large sums in recent races. Due to its potency, dermorphin was outed as one of the industry’s worst and weirdest drug violations. 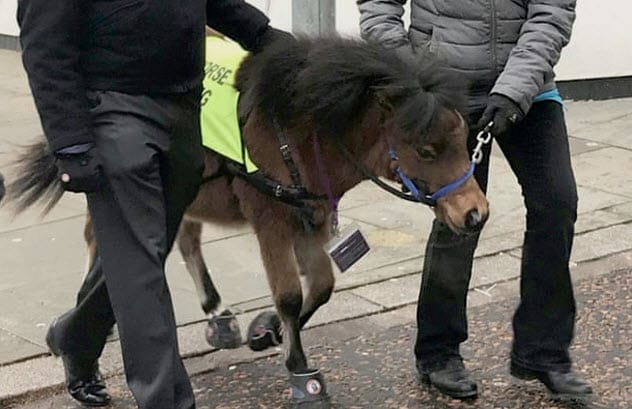 Mohammed Salim Patel turns heads wherever he goes. Patel, who is visually impaired, cannot see people’s reactions. However, he can hear the stir that he and his guide horse create on the streets of Blackburn in Lancashire.

As he traversed the marketplace one day, he heard cell phones snapping photos of Digby, his American miniature horse. The unusual choice did not come from the desire to stand out. Patel suffers from a fear of dogs. Not having a guide dog made the 23-year-old reliant on people for assistance. Digby was raised at a pony therapy farm in North Yorkshire and is Britain’s first guide horse for the blind.

In 2018, the pair started training together and should complete the program in 2020. After graduation, the tiny creature is bound for his own miniature stable at Patel’s home. Although the choice of species seems unusual, there are perks. Besides being capable of guiding, miniatures live around 45 years—a lot longer than dogs—and have no problem doubling as a shopping carrier.[9]

1 Clones At The Olympics Horses have been cloned since 2003. Around four years later, the Federation Equestre Internationale (FEI) banned cloned horses and their offspring from the Olympic Games. Since most would be cloned from high-level champions, FEI believed that the replicas had an unfair advantage in competition.

In 2012, the governing body reviewed the issue. They found that clones were 98 percent identical to the original horse. While the margin was small, it overturned the ban. Other factors also helped. Just because the donor animal shattered records does not mean that the clone is guaranteed to inherit its performance ability.

The rider, training, environment, and nutrition all influence competing skills. In other words, 10 clones from the same horse raised differently in all ways will not turn out the same. Genetic copies must also go through the same channels as natural-born horses to reach the Games. Since roughly 300 animals make it to each Olympics, a clone must really prove itself to qualify.[10]