Ok, I know I wasn’t supposed to make any more plant lists, but I couldn’t help myself. By killer plants, I do not mean as in Top 10 Carnivorous Plants, plants that kill little insects, and the occasional rat, but plants that are well known to kill people. All plants contain some toxins as protection against predators. We already know, from Top 10 Poisonous Foods We Love to Eat, that even apple seeds contain traces of cyanide.

In this list, we will look at some plants that contain such high doses of toxins to which humans are sensitive that some can kill you in a matter of hours. In some cases, many animals have a much higher tolerance to the poison than humans, and all the plants on this list are known, human killers. It’s shocking to read this and recognize some of the plants you grew up playing around, knowing that just one bite could have killed you, and knowing just how curious children are. Many of these plants’ main victims are children, as they often have bright fruit that looks rather appetizing, and children have an even lower tolerance to the poison, so it takes a lot less to do the job. Who knows, this information might come in handy someday. 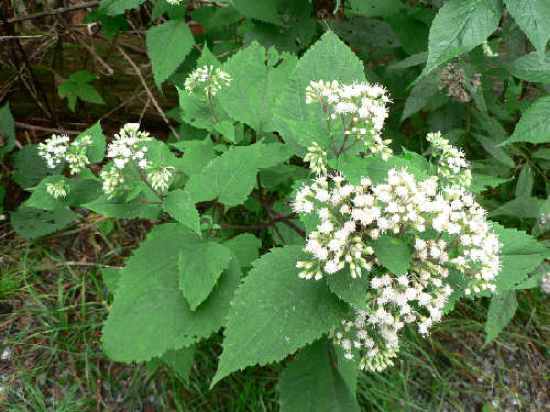 White Snakeroot, also known as White Sanicle or Tall Boneset, is a highly poisonous plant native to North America. Their flowers are white, and after blooming, small fluffy seeds blow away with the wind. This plant has a high percentage of the toxin tremetol, which is not known for killing humans directly but indirectly. When cattle eat the plant, the toxin is absorbed into their milk and meat. When humans then, in turn, eat the beef or drink the milk, the toxin enters the body and causes something called milk sickness, which is highly fatal. Thousands of ignorant European settlers died from milk sickness in America in the early 19th century. It is also believed that Abraham Lincoln’s mother, Nancy Hanks, died from milk sickness. 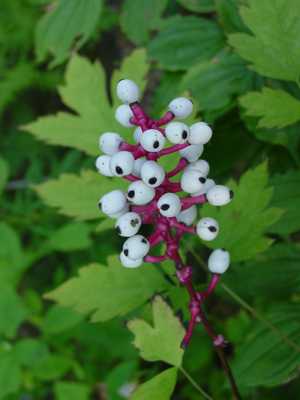 Doll’s Eye, also known as White Baneberry, is a flowering plant native to eastern and northern North America. The Doll’s Eyes name comes from the plant’s striking fruit, a 1cm (0.39 inch) diameter white berry with a black stigma scar, which looks very eye-like. Although the whole plant has been declared toxic for human consumption, the most poisonous part is the concentrated toxins in the fruit, which have sadly claimed a number of children’s lives, as they also have a sweet taste. The berries contain a carcinogenic toxin, which has an almost immediate sedative effect on human cardiac muscles and can easily cause a quick death. 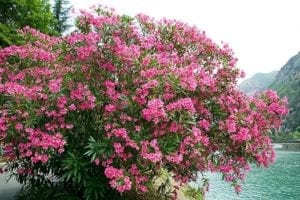 Oleander (Nerium oleander) is among the most versatile shrubs, with dozens of uses in southern and coastal landscapes. They tolerate a wide range of conditions, including difficult soil, salt spray, high pH, severe pruning, reflected heat from pavements and walls, and drought. The shrubs are commonly used as a freeway median divider in warmer states, such as California. There are numerous varieties, some of which can grow to be as high as 18 feet. The flowers range from pure white through pale-yellow, peach, salmon, and pink to deep burgundy red. However, this plant is highly toxic, and a single leaf may kill an adult. All parts of the shrub are poisonous—its flowers, leaves, and stems. The plants contain several toxins, including digitoxigenin, neriin, and oleandrin, that can affect numerous parts and systems of the body. Ingestion of any parts of the oleander plant can result in irregular or slow heartbeat, blurred vision, diarrhea, stomach pain, headache, loss of consciousness, and even death. 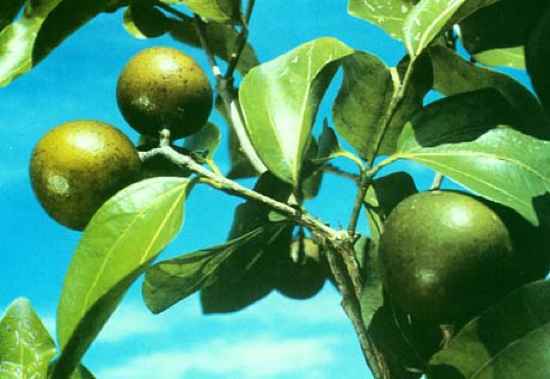 The Strychnine tree, better known as Poison Nut or Quaker Button, is a medium-sized tree native to India and Southeast Asia. The small seeds inside the tree’s green to orange fruit are highly toxic, filled with poisonous alkaloids: Strychnine and Brucine. Just 30 mg of these toxins are enough to be fatal to an adult and will lead to a painful death from violent convulsions due to simultaneous stimulation of sensory ganglia in the spine. 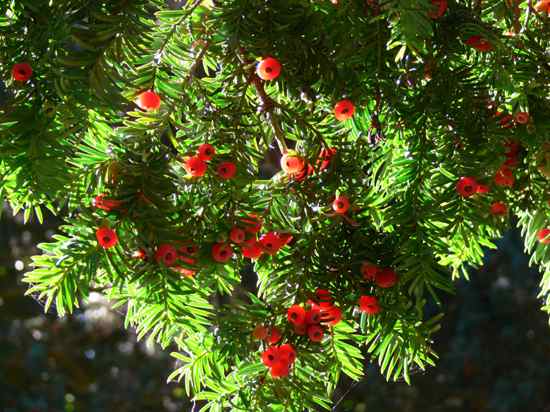 The English Yew is native to Europe, Northern Africa, and southwest Asia. It is a small to medium tree with seeds enclosed in a soft, red, berry-like armor. The berry armor is the only part of the fruit that is not poisonous, and this allows birds to eat the fruit and spread the seeds without ill effect. It takes a dose of about 50g to be fatal to a human. Symptoms include difficulty breathing, muscle tremors, convulsion, collapse, and finally cardiac arrest. In cases of severe poisoning, death can set in so fast that the other symptoms are missed. 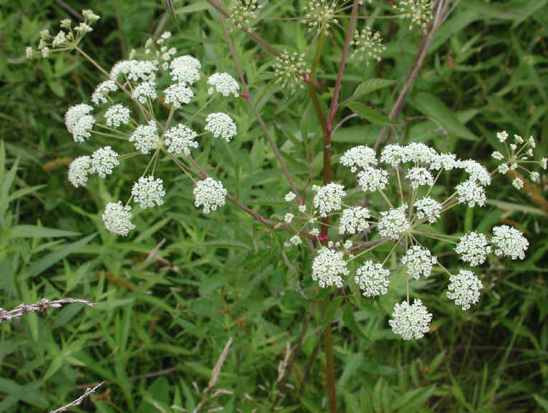 Water Hemlock, or Poison Parsnip, is a group of highly poisonous plants native to the temperate regions of the northern hemisphere. The plants all have very distinctive small white or green flowers arranged in an umbrella shape. Water Hemlock is considered North America’s most poisonous plant as it is incredibly poisonous to humans. The plants contain a toxin named cicutoxin which causes seizures. This poison is found in all parts of the plant but is most concentrated in the roots, which is most potent in the spring. Besides the almost immediate seizures, other symptoms include nausea, vomiting, abdominal pains, tremors, and confusion. Death is usually caused by respiratory failure or ventricular fibrillation and can occur just a few hours after ingestion. 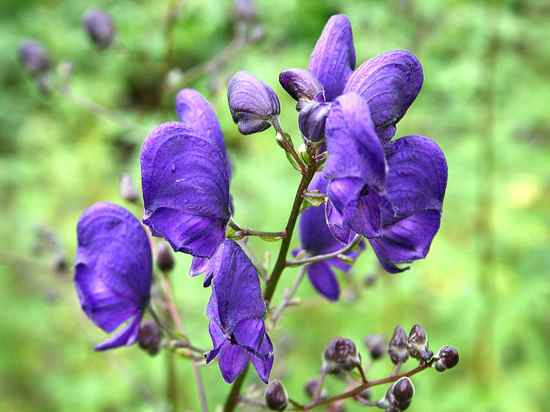 Wolfsbane, also known as Leopard’s Bane, Woman’s Bane, or Devil’s Helmet, is a plant belonging to the buttercup family. These perennial plants are native to mountainous regions of the northern hemisphere. The plant contains vast quantities of a poison called alkaloid pseudaconitine, which the Ainu people of Japan previously used for hunting as poison for the tips of their arrowheads. In cases of ingestion, symptoms, including burning in the limbs and abdomen, set in immediately. In large doses, death can occur within 2-6 hours, and 20ml is enough to kill an adult human.

Interestingly, Wolfsbane is also mentioned in mythology and werewolf lore as being able to either repel the werewolves/lycanthropes or induce the wolf state regardless of the moon phase. Hence the name. 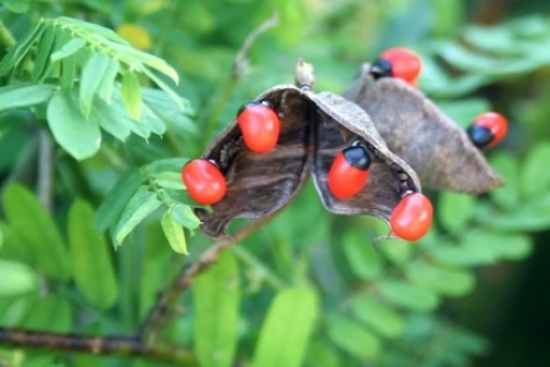 The Rosary Pea, also known as Crab’s Eye or Jumbie Bead, is a slender perennial climber that twines around trees, shrubs, and hedges. The plant is native to Indonesia but grows in most parts of the world. It is best known for its seeds, which are used as beads and have a bright red to orange color with a single black spot (not unlike an inverted black widow). The poison in the plant (abrin) is very similar to the poison ricin found in some other poisonous plants. There is one main difference between these poisons: abrin is about 75 times more potent than ricin. This makes the lethal dose much less, and in some cases, as little as 3 micrograms can kill an adult human. Using seeds as beads even poses a huge threat, as people have been known to die just from pricking their fingers on the drill bits used to drill the tiny holes in the seeds. 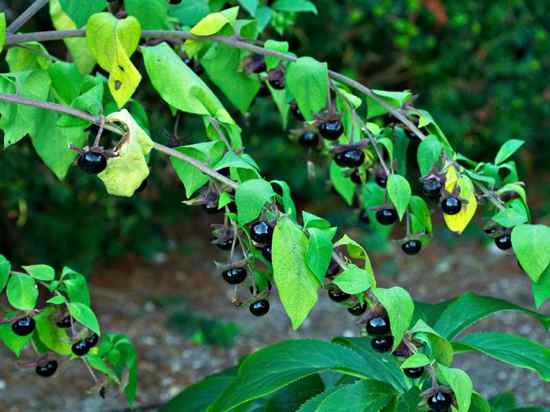 Belladonna, also known as Devil’s Berries, Death Cherries, or Deadly Nightshade, is native to Europe, North Africa, and western Asia. It is also one of the world’s most poisonous plants as it contains Tropane alkaloids, some of which cause delirium and hallucinations. Other symptoms of Belladonna poisoning include loss of voice, dry mouth, headaches, breathing difficulties, and convulsions. The whole plant is poisonous, but berries usually play the greatest risk, as they are sweet and tend to attract children. Just 10-20 berries can kill an adult, but it only takes 1 leaf (the poisons are much more concentrated there) to kill a full-grown man.

Strangely, our very “intelligent” ancestors of the Elizabethan era (the 1500s) used Belladonna as part of their daily cosmetic routine. They used drops made from the plant as eye drops to dilate their pupils, which was considered attractive and gave the user a dreamy look. Not being very knowledgeable at the time, the women also drank cyanide or “bled” themselves to obtain a pale, translucent skin color, in addition to painting their faces white with a lead-based paint called cerise. 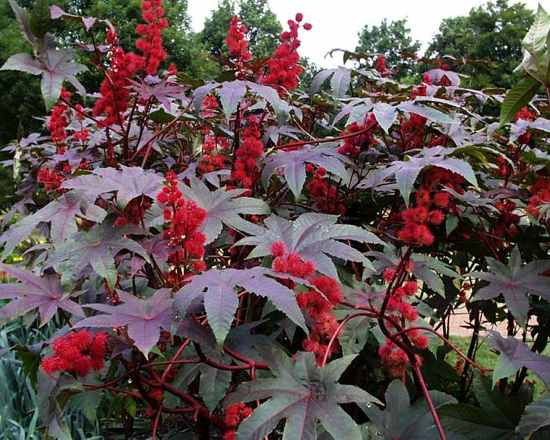 Thinking back to the time your mother forced Castor oil down your throat, I bet you would never have guessed that it came from the most poisonous plant in the world (even if it did taste like it).

Castor plants are indigenous to the Mediterranean basin, eastern Africa, and India but are widely grown as ornamental plants. A toxin called ricin is found throughout the plant but is concentrated in the seeds/beans (which castor oil is made from). One raw seed is enough to kill a human in 2 days, making for a long, agonizing, and unstoppable death. The first symptoms will be experienced within a few hours and include a burning sensation in the throat & mouth, abdominal pain, bloody diarrhea, and vomiting. The process is unstoppable, and the final cause of death will be dehydration.

Strangely, humans are the most sensitive to these seeds, as it takes 1-4 to kill a full-grown human, 11 to kill a dog, and a whopping 80 seeds to kill a duck. The castor plant currently holds the Guinness World Record for the most poisonous plant.