Despite the fear they put in many people, snakes are actually under threat in their own natural environment. Between the pressures caused by invasive species and the gradual destruction of their habitats, it’s no wonder that there are a number of snakes that are threatened with extinction. 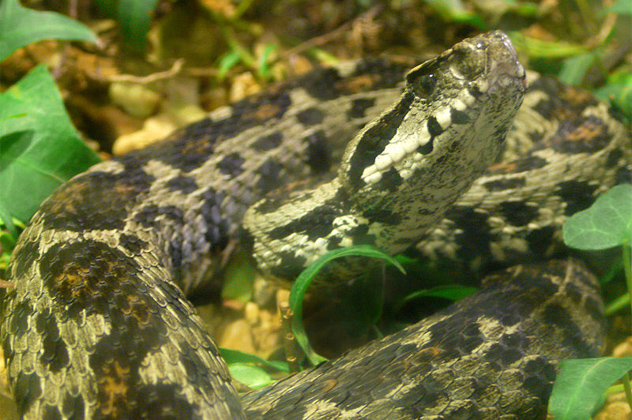 Vipera wagneri, or the ocellated mountain viper, is a venomous viper found in northwest Iran and eastern Turkey. This snake lives at altitudes of over 1,500 meters (5,000 ft) and prefers rocky or grassy areas. In 2008, the status of the Wagner’s viper was changed to critically endangered as it was feared that the planned construction of a dam within its limited habitat range would devastate the viper’s population.

Numbers have also been declining due to many people capturing these snakes as pets. It is estimated that there are fewer than 2,500 adults left in the wild. Its name is derived from Moritz Wagner, a German explorer who collected the first documented specimen in 1846. Due to the threat of extinction to these snakes, the St. Louis Zoo incorporated them into their breeding program, with nine babies being born at the zoo in August 2013. 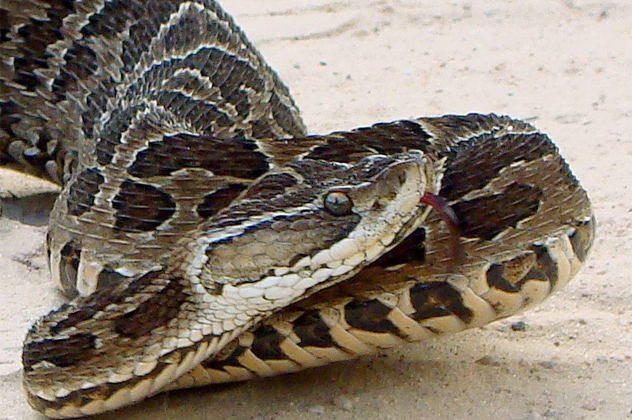 This snake, whose scientific name is Bothrops alcatraz, is a critically endangered viper that lives on a small island off the southeastern coast of Brazil. This snake derives its name from the island that it lives on, Ilha de Alcatrazes, a tiny rock of only 1.35 square kilometers (0.5 mi2) that forms part of the Alcatrazes archipelago. This snake faces a unique threat to its continued survival—the island is frequently used as a naval target area, endangering the lives and habitat of these rare snakes.

The Alcatrazes lancehead belongs to the pit viper family, meaning that it has a heat-sensing organ in its head which it uses to locate its prey. And like all other pit vipers, it’s deadly poisonous. The exact numbers of surviving Alcatrazes lanceheads is unknown, although it has been noted that they are fairly common on the small island that they live on. 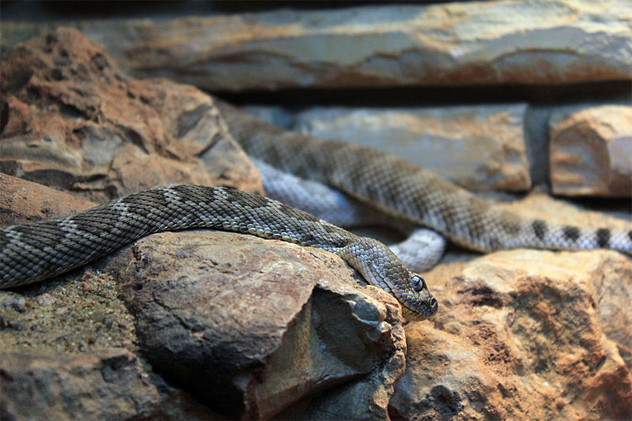 The Santa Catalina Island rattlesnake, or Crotalus catalinensis, is a small, slender pit viper found only on the island of Santa Catalina in the Gulf of California. This rattlesnake is unique because of its lack of a functioning rattle. It is believed that this rattlesnake lost its rattle in an attempt to better adapt to its environment, allowing it to silently sneak up on birds in desert brush.

Their population is facing severe challenges due to the presence of feral cats, which prey on the snakes. Additionally, these relatively passive snakes have been the targets of killing and illegal collection, further placing it in danger. Also, with the decline of their main prey, the deer mouse, it is feared that populations of this rare snake may decline even further. However, it is hoped that a recently introduced program to reduce the number of feral cats on the island will go a long way toward the preservation of these snakes. 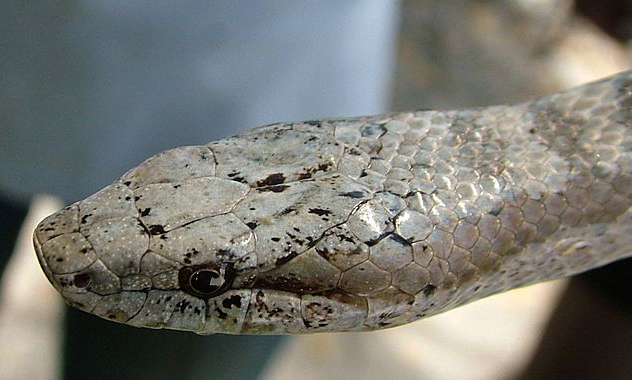 Formerly the world’s rarest snake, Alsophis antiguae has made something of a comeback due to concerted conservation efforts. The Antiguan racer is located on a few small islands just off the Caribbean island nation of Antigua and Barbuda. The Antiguan racer was previously living on the main island of Antigua, but was wiped out after the introduction of the mongoose and black rat. However, a small population of racers managed to survive on Great Bird Island, a low-lying islet located just a couple miles off the shore of Antigua.

This species was believed to be extinct until it was rediscovered in the early 1990s. After the successful eradication of predatory rats from the island, the population has since increased to over 900 individuals, with snakes being reintroduced to nearby islands. The Antiguan racer is a brown, non-venomous snake and is docile and easy to handle. Its diet consists almost exclusively of lizards that live on the small offshore islands. 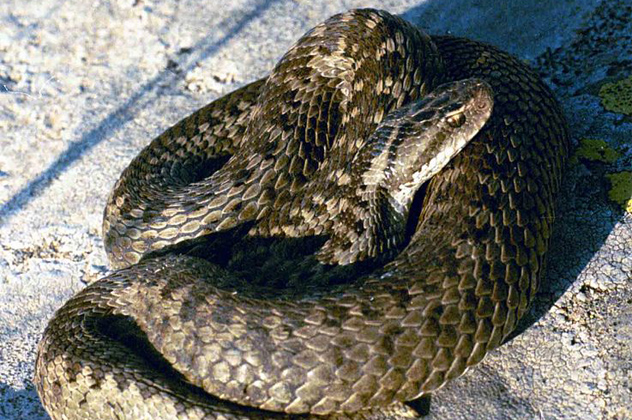 Vipera darevskii is a venomous viper which can only be found in northwestern Armenia and northeastern Turkey. The viper is named after Ilya Darevsky, who was one of the first to find and identify the species. Due to the destruction of its natural habitat from overgrazing by domestic animals, the numbers of Darevsky’s vipers are on the decline. At last count there were only about 500 individuals left in the wild, placing this snake on the brink of extinction.

On top of that, its range is severely fragmented, with small pockets of snakes spread over a wide area. This viper’s diet consists mainly of lizards, rodents, and the occasional insect. Darevsky’s viper lives primarily at high altitudes on mountain ridges and spends part of its day basking in the Sun in order to acquire enough heat to operate during the day. These snakes display sexual dimorphism, meaning that the females are significantly larger than males. 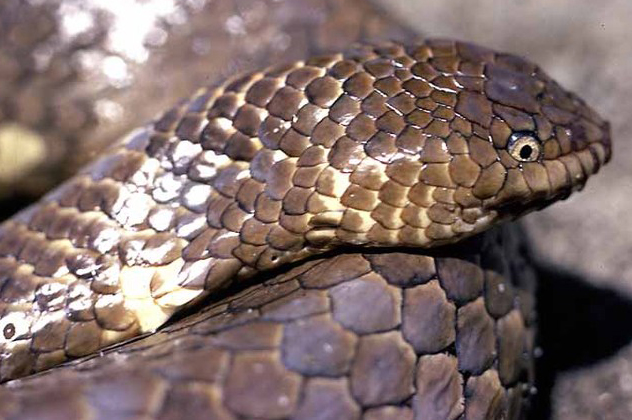 The Sahul reef snake, otherwise known as the short-nosed sea snake, is a critically endangered sea snake whose habitat is mostly contained in a small area off the coast of North Western Australia. This snake, whose scientific name is Aipysurus apraefrontalis, derives its name from the fact that it has a small head and a short, pointed snout. The Sahul reef snake prefers sandy areas with sparse coral and can live up to 10 years in the wild. It has so far only been found within the area of two reefs—Ashmore and Hibernia.

While this snake was once relatively abundant up until the 1990s, its numbers have dwindled so much that no individuals have been recorded in surveys since 2000. While the reasons for this snake’s disappearance within its habitat are unknown, it has been hypothesized that severe coral bleaching and degradation may be a major culprit.

The Round Island Burrowing Boa

Casarea dussumieri, otherwise known as the Round Island keel-scaled boa, is found only on Round Island, Mauritius. Adults can reach up to 1.5 meters (5 ft) in length. They’re dark brown on their upper side, and their bellies are lighter with a smattering of dark spots. The snake gets its name from small, keeled scales that cover its body. The species has recently been reintroduced to another island, Gunner’s Quoin, and although there were less than 250 mature Round Island boas in 1996, their numbers have now increased to around 1,000. This is due in large part to the eradication of invasive species such as goats and rabbits, which has led to the return of much of their native habitat.

These snakes are part of a captive breeding program that will help in ensuring their continued survival. They lay up to 12 eggs at a time, and incubation usually lasts around 90 days. 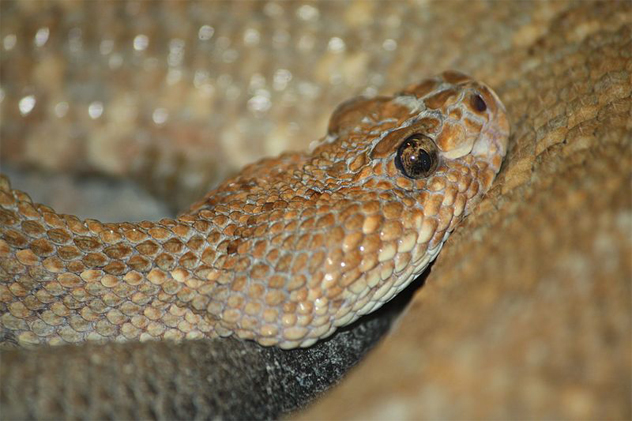 The Aruba Island rattlesnake, or Crotalus unicolor, is a critically endangered rattlesnake that is endemic to the Caribbean island of Aruba, located just off the coast of Venezuela. The snakes usually have a uniform gray or light brown body color, although they sometimes have diamond-shaped markings on their backs. The snake is nocturnal during the hot summer months but will venture out during the cooler early-morning and late-afternoon periods.

The rattlesnake is viviparous, which means that it gives birth to live young rather than laying eggs. It has an estimated lifespan of up to 20 years, and its diet is made up of mainly rodents, birds, and lizards. It is estimated that there are only 230 surviving adults in the wild, with about 100 more adults in captivity. This snake is, unfortunately, threatened by encroaching human development—it only has about 25 square kilometers (9.5 mi2) of undeveloped habitat in which it survives. The introduction of goats has also had a negative impact on the vegetation of the island, reducing these snakes’ habitat even further. 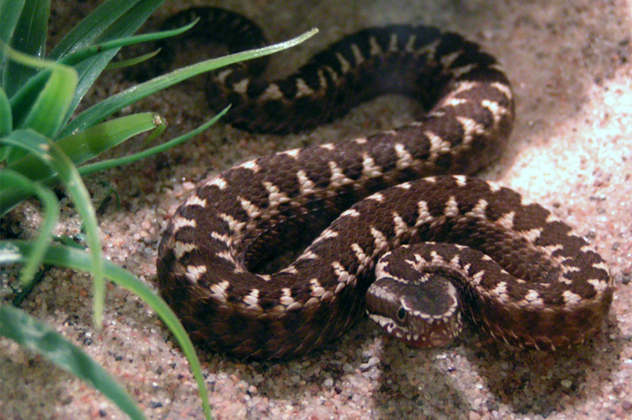 Vipera orlovi is native to the Black Sea region of Russia, where it is endemic to the Caucasus region. It was only in 2001 that Orlov’s viper was separated as a distinct species from the closely related Caucasian viper. This snake has a triangular head and long, venomous fangs which are folded against the roof of the mouth when not in use. Although the colors and patterns of the vipers can change from specimen to specimen, they are usually brown, gray, or yellow-gray with brown or black zigzag bands.

Orlov’s vipers have been shown to eat a wide range of foods such as mice, lizards, frogs, and insects. It’s estimated that there are less than 250 adults in the wild. The Orlov’s viper suffers from widespread poaching due to its popularity as a pet. With less than 100 square kilometers (38 mi2) of natural habitat remaining, the Orlov’s viper is now listed as critically endangered. 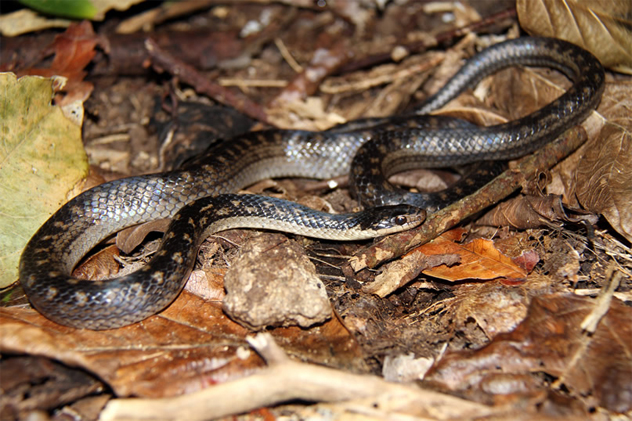 Recently proclaimed the rarest snake in the world, the St. Lucia racer is located on a tiny island just off the coast of St. Lucia, a tropical Caribbean island. While these snakes once existed on St. Lucia, they were eradicated when invasive predators such as the mongoose and black rat were introduced to the island, killing these small snakes and poaching their eggs. They were actually declared to be extinct in 1936 but were rediscovered on Maria Major in 1973, where the snakes managed to survive due to the lack of mongooses.

This non-venomous snake reaches a maximum length of just under 1 meter (3 ft), and is usually light brown in complexion with a distinctive brown stripe running from the neck down to the tail. With a recent survey indicating that as few as 18 of these snakes exist on the island, the St. Lucian racer is one of the rarest animals in the world. Currently, major conservation efforts are underway to protect these snakes before they become extinct.

Daryl George is a conservationist who has been involved in the preservation of the Antiguan racer snake, as well as the removal of several dangerous invasive species in the Caribbean.