Music is one of the few things in life that is universally enjoyed. The first few notes of our favorite songs are enough to instantly brighten our day. Yet despite the good vibes, the music industry itself is a bit of a horror show. Between songs said to drive the listener mad, murderers citing song lyrics as inspiration, and supposedly cursed pieces of music, it’s enough to wipe the smile from anyone’s face. Check out these terrifying tales of musical mayhem.

On October 26, 1984, John Daniel McCollum was listening to a record by his idol, Ozzy Osbourne. The 19-year-old was lying on his bed, his headphones turning out the tracks. During the final song, “Suicide Solution,” the seemingly cheerful teen grabbed a gun and ended his own life.[1]

McCollum’s parents were quick to accuse Osbourne of encouraging their son to commit suicide, claiming that lyrics like, “Suicide is the only way out,” had brainwashed him. They took the artist to court in 1986, where Osbourne claimed that the tragedy had been a simple misunderstanding. “ ‘Solution’ as in liquid, not a way out,” he explained. “The song’s about the dangers of alcoholism.”

The case was dismissed in 1988, but the supposedly evil tune wasn’t finished yet. The very same year the McCollums filed their lawsuit, another teen took his own life after listening to the notorious song. The result was another dismissed lawsuit—as well as a bizarre and unsettling pattern.

U2’s “Exit” tells the dark tale of a religious fanatic turned murderer. Inspired by the story of executed convicted killer Gary Gilmore, it’s understandably a bit heavy. But it became even more so following the events of July 18, 1989, when a madman decided the song had ordered him to take a human life.[2]

Arizona native Robert John Bardo, obsessed with actress Rebecca Schaeffer, stalked her for three years before murdering her outside her apartment building. Later in court, Bardo claimed the lyrics from “Exit” had inspired him to commit the savage point-blank shooting, specifically lines like “pistol weighing heavy.” When played during the trial, the normally emotionless Bardo disturbingly lit up, bobbing to the music and mouthing the lyrics.

Luckily, the senseless tragedy wasn’t pinned on the band, and Bardo was convicted of first-degree murder. He remains imprisoned—and presumably completely nuts—to this day.

8 The Ninth Symphony
Anyone 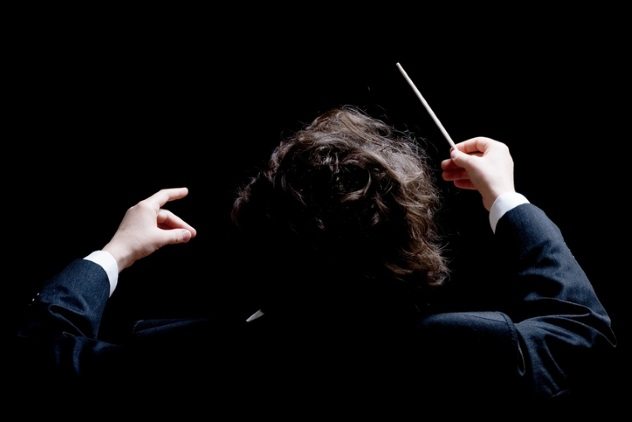 For nearly 200 years now, a curse has plagued composers the world over: Soon after completing his ninth symphony, a musician is doomed to die. Despite all logic and rationality, a tenth symphony remains tragically just out of reach for a staggeringly large number of composers.

Beginning with Beethoven’s untimely death while penning his tenth in 1827, the curse has since claimed scores of classical musicians, such as Anton Bruckner, Vaughan Williams, and Antonin Dvorak.[3] Of course, it could be argued that the deaths are simply a product of old age. After all, it can take decades to write nine symphonies. But there are also the ridiculously early deaths of Gustav Mahler at 50 of heart failure and Franz Schubert of typhoid at a depressing 31, both after writing their ninth symphonies.

But fear not, would-be music makers, because American composer Philip Glass has recently beaten the dreaded curse. He wrote his tenth before releasing his ninth, just to be safe. It seems to have worked, although an audience member collapsed at number nine’s premiere.

7 ‘Better By You, Better Than Me’
Judas Priest

Judas Priest – Better By You, Better Than Me

On a December evening in 1985, 20-year-old James Vance and 18-year-old Raymond Belknap stumbled into an abandoned playground. The two had spent the day drugging themselves into oblivion and decided to cap it off with a little suicide. Belknap shot himself and died immediately, but Vance only managed to injure himself. (He finally killed himself three years later.)

Following the incident, the duo’s parents decided the obvious culprit was a song they’d listened to that day, “Better by You, Better than Me,” by Judas Priest.[4] They claimed subliminal messages hidden in the track told listeners, “Let’s be dead,” and to “do it.” This led to a bizarre six-week trial which ended with lead singer Rob Halford actually singing the song in the courtroom. The judge ultimately decided that the band had indeed planted hidden suicidal messages in the tune (they hadn’t) but that the ordinary listener wouldn’t hear them. So the case was dismissed, but it was a grave defeat for common sense.

Blues musician Robert Johnson had a short but massively influential career in the 1930s. However, rumors abound that his popularity was due to a deal he made with the Devil himself at a crossroads in Mississippi, granting him musical success but cursing him with an otherwise tragic life. And after his death at 27, that curse decided to hang around.

Johnson’s “Cross Road Blues” seems to leave a trail of tragedy in its wake.[5] After Eric Clapton covered the tune, his band broke up, and his young son fell to his death from a 53rd floor window. Members of the Allman Brothers Band died in motorcycle accidents at actual crossroads after their cover. Lynyrd Skynyrd’s infamously fatal plane crash and the death of Led Zeppelin front man Robert Plant’s son also followed soon after performances of Johnson’s musical monster. Kurt Cobain’s death—also at 27—is even rumored to have been linked to his plan for a cover on a future album.

In the early 1970s, Pakistani poet Ibne Insha wrote what would become his most famous poem, “Insha ji Utho.” It tells the sorrowful tale of a man lost in a cold, pointless existence. Despite the dark subject matter, singer Amanat Ali Khan fell in love with the piece and, with Insha’s permission, adapted it into a song.

Khan performed it on television in January 1974, and it immediately became his biggest hit. He enjoyed more fame than he’d ever known, at least until his sudden, untimely death a few months later.[6] Then, four years to the day after the original telecast, Insha himself passed away at 50 after a battle with cancer.

Years later, Khan’s son, Asad Amanat Ali, had also become a successful singer. At a concert in 2006, he ended the evening with his rendition of “Insha ji Utho.” It was the last song he would ever perform. He passed away as suddenly as his father only months later. Khan’s other singing son, Shafqat Amanat Ali, has since sworn never to perform the malicious melody.

This song, much like the offerings from Ozzy and Judas Priest, probably hasn’t inspired any murders, but that didn’t stop the entire world from thinking so in the 1980s. During the terrifying two-year reign of serial killer Richard Ramirez, Los Angeles residents were slaughtered in the most horrific ways imaginable after he slipped through their windows at night. At one grisly crime scene, authorities discovered an AC/DC hat Ramirez had left behind.

As it happens, the album Highway to Hell includes a sinister-sounding song about creeping around in the dark and climbing through windows, “Night Prowler.” That was all the media needed to know. Obviously, Ramirez had been driven to gruesome murder by the lyrics of this evil rock song. Ramirez was forevermore known as the “Night Stalker,” unfairly linking the band’s work with a psychopath’s nightmarish violence.[7]

People who commit murder are obviously a little unhinged. Trying to assign logic to their actions is doomed from the start. You just have to accept that you will never understand the mindset. And you had better start accepting fast because here come the Phillipines.

Karaoke bars in the island nation have only one taboo: Do not, under any circumstances, sing Frank Sinatra’s “My Way.” Murders caused by amateur renditions of the song are so bizarrely common that the news media has a special category just for them.[8] At least six killings and countless fights have been reported in the past few years alone.

No other similar songs incite such violence, and nobody really knows what causes this phenomenon. Some think it’s the arrogant nature of the lyrics, while others believe it’s just bad singing. Filipino culture takes singing—particularly karaoke—very seriously, so presumably any deviation from karaoke “etiquette” could be to blame.

The Beatles’ 1968 song “Helter Skelter” is a nice little tune about an amusement park ride of the same name. But on August 9, 1969, a man and his brainwashed followers would make the silly little phrase synonymous with abject terror. His name was Charles Manson.

Manson had become convinced that the British musicians were actually angels and that they were secretly communicating with him through their music.[9] He and his cult were under the delusion that “Helter Skelter” was a prophecy of an apocalyptic race war which they were destined to start. Believing a high-profile mass murder would be a good signal for the Earth to get its war on, they loaded into their van and headed into the Hollywood Hills.

In the course of two evenings, seven people were brutally slaughtered. Manson and his “family” ended up in jail, and a perfectly good song was ruined. Manson remains in prison to this day, waiting for his war.

In the early 1930s, struggling Hungarian songwriter Rezso Seress found himself depressed one cloudy Sunday afternoon. His work was largely ignored by the music industry, his career was dying, and the woman he loved had walked out on him. And so he sat at his piano, alone. Then, lost in despair and idly plinking away at the keys, he stumbled upon the melody that would become his unwanted masterpiece.

“Szomoru Vasarnap,” or “Gloomy Sunday,” became an overnight success. It was played nonstop the world over, and Seress finally had the fame he’d been chasing for years. But then the suicides started.[10] Corpses were found clutching the song’s sheet music. Suicide notes containing lyrics were left. One body was found with the tune skipping endlessly on a record player. A man even shot himself after complaining that he couldn’t get the song out of his head.

It’s believed that the number of suicides linked to “Gloomy Sunday” measure in the hundreds. It became known as the “Hungarian Suicide Song,” and it was even banned on English radio. And, as if the song was tying up loose ends, both Seress and his girlfriend, the song’s muse, ended up dying by their own hands.

Read more about when music and death have crossed paths on 10 Attempts To Blame Murder On Music and 10 Shocking Things Done In The Name Of Black Metal.