An intriguing aspect of history concerns hidden features. Some were secret on purpose, while others were buried over time and forgotten. Concealed rooms, passages, and art can add more color to those who lived before, even to figures and monuments that are already well-known. 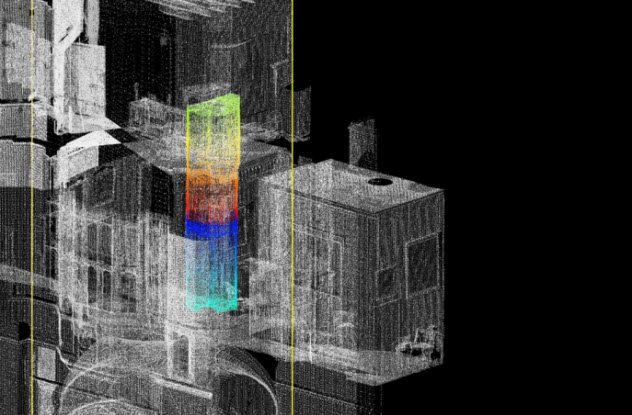 Coughton Court belonged to a Catholic family when King James I outlawed priests. During the persecution, which lasted through the 16th and 17th centuries, supporters of the Catholic faith built hiding places known as priest holes.

During the 1850s, the resident owners of the Tudor mansion discovered a secret room in one of the watchtowers. But the priest hole’s ingenuity did not come to light until 2017.

Most priest holes were deliberately hard to find and harder to access, but some were still found by search parties. The Coughton tower revealed a final attempt to keep a hiding priest safe.[1]

A laser scanner found a hidden compartment inside the room. What appeared to be the real priest hole—and meant to fool soldiers into thinking it was empty—was a chamber constructed beneath a floor. But underneath was another small space where the priest was likely really hiding.

Coughton Court is known as the meeting place of the Catholic resistance on the day they tried to blow up the king in 1605. The most famous of the conspirators was Guy Fawkes. 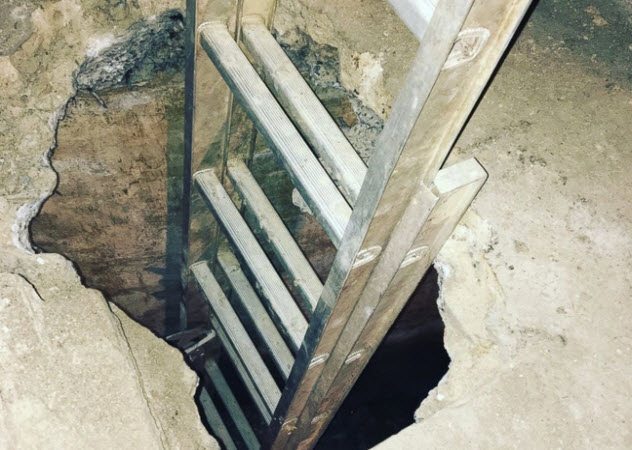 The home of Alexandra Poulos is not famous, but it could be connected to a chapter of US history that remains unforgettable. Located in Lansdowne, Pennsylvania, an area known for its history with the Underground Railroad, the old house was in need of repairs.

In 2016, Poulos hired a company to fix cracked walls when she remembered an old story. Years ago, a neighbor had mentioned that there was a basement under the Poulos house’s basement. Back then, the tale went unchased, but she asked the masonry team to investigate below the house when they were done with the cracks.

That was when they broke through to a sealed room. It was 4 meters (14 ft) down and about 5 meters (15 ft) long and 1.8–2.4 meters (6–8 ft) wide.[2] The local history leaves the room ripe to be identified as part of the underground movement that helped slaves reach freedom.

Five minutes away, another house sat on a confirmed subterranean part of the Underground Railroad. However, more research is needed to eliminate the possibility that this chamber served as a storeroom or hiding place for something else altogether. 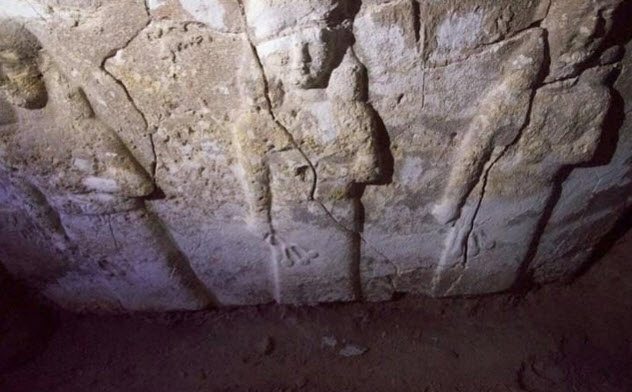 In 2014, Islamic State militants razed another iconic landmark. This time, it was the shrine of the Prophet Jonah in Nineveh. The edifice was said to mark the grave of Jonah, who is mentioned in the Bible and the Koran and also in Judaism.

Iraqi forces recaptured the hill on which it stood in 2017, and archaeologists were allowed to assess the damage. The ancient building had been blown up, but a remarkable find waited underneath the rubble.

The archaeologists followed tunnels dug by ISIS and were astonished when the tunnels led to a previously unknown palace. The 2,600-year-old building had not been harmed. Nineveh was once an ancient Assyrian city (in what is now Iraq), and the royal residence was build for King Sennacherib.

Two additional kings, his son and grandson, also resided there. It is not known what artifacts were removed by the extremists, but several priceless pieces remained.[3] These included a marble inscription from 672 BC by Sennacherib’s son in cuneiform, an early form of writing.

In another tunnel were stone sculptures of a female deity. Done in fine detail, they showed the demigoddess guarding mortals by casting drops of the water of life. 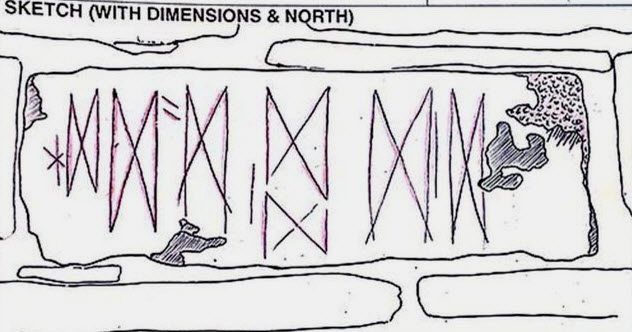 Ness of Brogdar is a famous and well-researched archaeological site in Orkney, Scotland. This makes the latest discovery in July 2017 even more remarkable.

The site is known for Neolithic standing stones and buildings, but one of the walls had a special block. It carried nearly invisible designs on the surface, so much so that they never showed up in any photographic images taken of the block.[4]

They were finally revealed when somebody happened to be standing in the right place, looked at the block at the right moment, and the light hit the etchings at a certain angle. The chance discovery showed carvings roughly resembling butterflies or bow ties.

The reason behind the vanishing art is not entirely clear, but scholars feel that the carvings were deliberately made to appear when the conditions are right. The hunt is now on to scour the rest of the site for more of the hidden symbols, which have been described as the finest found in Orkney so far. 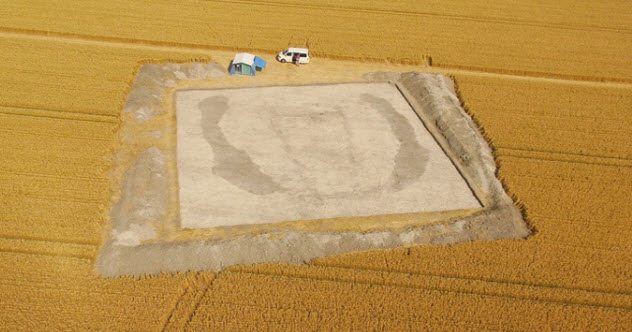 In 2017, aerial photography revealed an unknown monument in Wiltshire. The area had already produced stars like Stonehenge, Avebury, and Marden Henge, Britain’s biggest stone circle. The new feature sat in a farmer’s field and was soon identified as a Neolithic long barrow burial mound.

Situated halfway between Stonehenge and Avebury in a place called Cat’s Brain,[5] all that remained were traces of a building with a ditch on either side. The earth that made up the now-missing mound might have come from the trenches. The monument is around 5,000 years old and predates Marden Henge by over a millennium.

Considering the monument’s age and purpose, researchers hope to eventually find the remains of the ancestors of those who raised Stonehenge and Avebury. The so-called “House of the Dead” provides the rare chance to study a long barrow from a time when the country’s first monuments were being built. With any luck, it will also add something new to our understanding of this early Neolithic society. 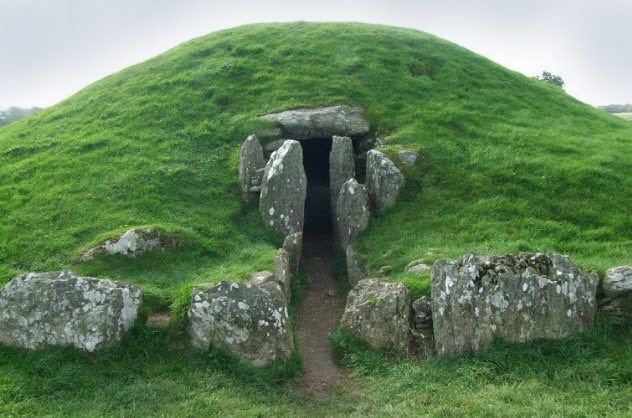 On Anglesey, another 5,000-year-old burial mound called Bryn Celli Ddu delivered a surprise. Known for aligning with the summer solstice when sunlight illuminates the inner room through a corridor, the monument has seen excavations since 1865.

The past few years revealed that Bryn Celli Ddu was not a stand-alone wonder. Incredibly, it was surrounded by a vast ritual landscape that showed signs of use over thousands of years. Ten rock carvings were found nearby and, more recently, pits filled with pottery and flint tools.[6]

The most exciting and biggest discovery happened in 2016 when archaeologists unearthed remnants of an ancient burial cairn. When the team returned the following year with ground-penetrating radar, they found evidence that the cairn belonged to an entire cemetery of similar graves lining the area around Bryn Celli Ddu. 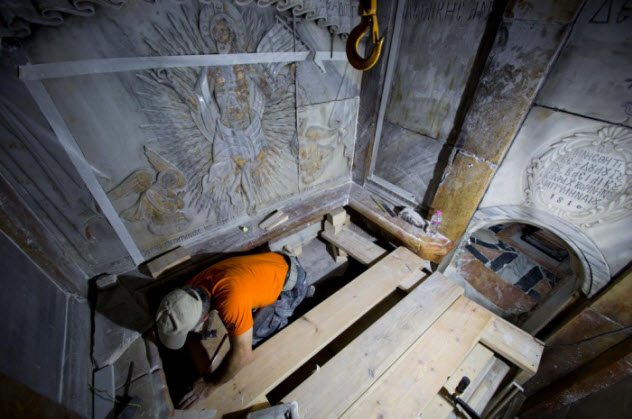 Jerusalem’s Church of the Holy Sepulchre is a 19th-century shrine marking Christianity’s most sacred place—the tomb of Jesus. The building’s center is hailed as the location of the burial cave, thought to be long gone.

In 2016, radar tests detected the original walls of the tomb. Encouraged by the presence of a cave, archaeologists removed the marble slab said to cover the shelf where the body of Jesus once rested.[7]

Underneath the centuries-old panel, they found rubble. More digging revealed another marble slab, this time with a carved cross. When this second one was lifted, it exposed the original burial bed cut from the limestone wall.

The finding shook the team, who did not truly expect to find a body shelf. Indeed, it is impossible to prove that this was the grave of Jesus, even though the Gospels state that he was buried in a rock-hewn tomb outside Jerusalem.

At the time, so were many other Jewish persons. But none was taken as seriously throughout history. Around AD 125, the Roman emperor Hadrian built a temple over it. This was destroyed two centuries later by Constantine, who raised a church to protect the tomb. 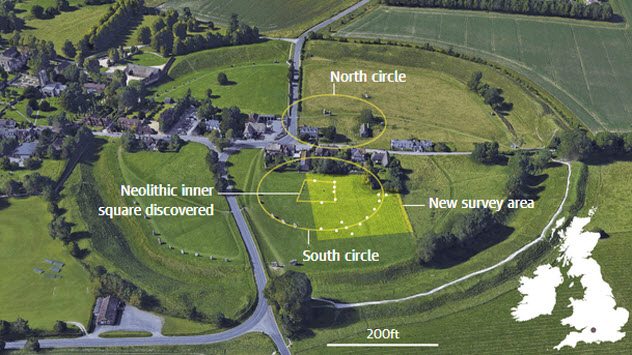 A diameter of 330 meters (1,083 ft) makes Avebury the largest stone ring in Europe. Why a Neolithic society decided to arrange 100 massive stones into three circles sometime around 2850–2200 BC remains hazy.

A unique addition may explain part of the story. Excavations in 1939 found a line of megaliths near the central obelisk. Recent radar mapping added more heart-stopping clarity. The 1939 “line” was one side of a square monument enclosing the obelisk. Each side was 30 meters (98 ft) long.

Discovering new hidden stones was unexpected and unusual but also changes the theory of Avebury’s beginnings. The World Heritage Site was thought to be built from the outer ring first.

Yet another find suggested that Avebury was built from the inside out and had humble beginnings. The remains of a wooden house dating to around 3500 BC were found inside the square (which is 500 years younger). The rings were added during the centuries that followed.[8]

Why the central ruins deserved what archaeologists suspect is a grand show of respect remains unknown. The inclusion of a square in any henge is also unheard-of. 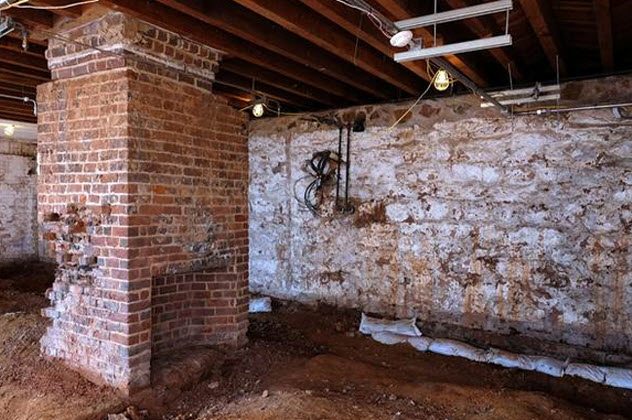 The enigmatic Sally Hemings was one of 600 slaves owned by Thomas Jefferson, the third president of the United States. She gave birth to several of his children while living at Jefferson’s Monticello mansion in Virginia.

Which part of the 5,000-acre plantation she called home remained unknown until archaeologists followed an old clue. One Jefferson grandson had mentioned that she lived in Monticello’s South Wing. Excavations shifted to that wing and unraveled why her room disappeared.

To accommodate visitors, it had been turned into a men’s bathroom in 1941 and was forgotten.[9] Located next to Jefferson’s bedroom, the real room soon reappeared. It was small—approximately 4.5 meters (14.7 ft) wide and 4 meters (13 ft) long—with no windows. Further digging found the original fireplace, floors, and walls built from rubble-stone in 1809.

Many of the artifacts found will be studied to paint a better picture of Sally Hemings’s personal life. Almost nothing is known about her, and just four physical descriptions exist.

A fellow slave described her as “mighty near white . . . very handsome, long straight hair down her back.” Sally lived in a cramped, dark, and uncomfortable space, but her living quarters showed she likely lived better than Jefferson’s other slaves. 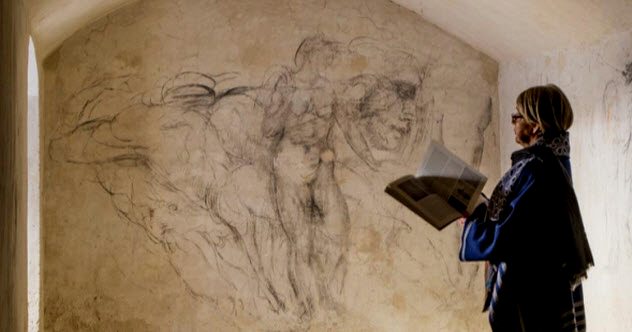 The Medici Chapels museum in Florence needed another tourist exit in 1975, prompting the director to assess where one could be installed. Instead, the search delivered a Renaissance treasure.

Under a cabinet, they found a trapdoor leading to a chamber that looked like a plain storage room. The director’s instincts revealed what some call “one of the major artistic finds of the 20th century.” He ordered the wall plaster to be removed because he was suspicious that something might be underneath.

Finding chalk and charcoal drawings, Dal Poggetto, the director, concluded that the collection included lost work by the legendary Michelangelo.[10] Several drawings had details similar to the master’s greatest works, produced both prior to and after the chamber sketches.

Dal Poggetto also believed that these were created when Michelangelo hid from the powerful Medici family in 1530. A few years earlier, the artist had turned against his patrons by siding with the Florentines who wanted them gone. When the Medicis returned from exile, Michelangelo was not safe.

Not all scholars are convinced that he holed up in the secret room. Some feel that the revered artist would have received shelter with another patron and that the doodles occurred in the 1520s, when he was commissioned by the Medici family to build their nearby mausoleum.