When nights falls on December 5, Sinterklaas comes to the Netherlands. While every good boy and girl is sleeping, the Dutch Santa Claus sneaks into their house and leaves treats and presents for the children to find when they wake up in the morning.

But Sinterklaas Day isn’t just an early Christmas. It’s something altogether different. Sure, a jolly old saint gives kids presents, but all the little details are just a little bit different—and, as you’ll soon find out, a whole lot weirder.

Get ready for the story of Sinterklaas—complete with African slaves, kidnapped children, castrated priests, and more. Today, we’re going learn all about the Netherlands’ strange, magical, and possibly just the tiniest bit racist holiday.

Sinterklaas looks an awful lot like a thin Santa Claus. He’s a jolly old man with a white beard and a red gown. Sure, he has a bishop’s hat and staff and there’s no Mrs. Sinterklaas, but he doesn’t seem that different. But it’s not just that he doesn’t have a wife—Sinterklaas is celibate.

That’s not just a minor detail about Sinterklaas. There are holiday carols entirely about the fact that Sinterklaas is a virgin. Like the classic carol “Sinterklaas kapoentje” (“Sinterklaas, you castrated rooster!”).[1]

This isn’t some minor song. It’s a huge part of the holiday. Remember that scene in Miracle on 34th Street where the little Dutch girl sings a Sinterklaas song to Santa? Well, that’s the song she’s singing—a beautiful melody about Sinterklaas being a castrated farm animal.

The song’s so old that nobody’s completely sure why they’re calling him a rooster, but it’s almost certainly about his vow of chastity. Most people just try to avoid talking about it, and so the English version usually changes it to “Sinterklaas, little rascal.” But that’s not what it really means.

For all we know, the song just might be literal. It just might be a glimpse into an old tradition lost in time. Maybe, instead of singing carols in a deep, jolly, tenor voice full of cheer, Sinterklaas just might sing castrato. 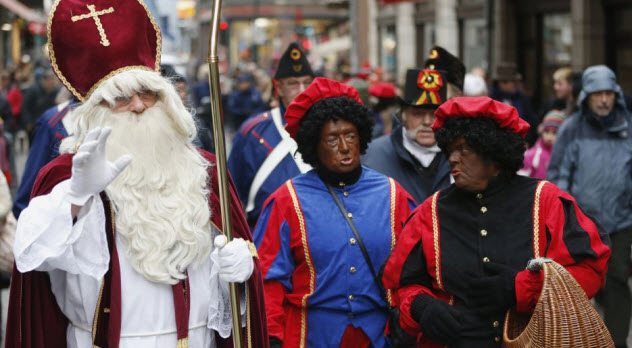 Sinterklaas doesn’t visit the children alone. He has helpers. His helpers, though, aren’t a group of merry, pointy-eared elves. They’re African slaves, all called Black Pete.

Officially, Black Pete is supposed to be a Moor from Spain, but it’s pretty rare that an actual Moor plays him. Instead, Black Pete’s usually played by some white Dutch person in blackface, complete with cartoonish red lips and a wig of natty black hair. And he doesn’t talk like a Moor. He speaks with the accent of an African slave in the Dutch colony of Suriname.

He’s changing a bit. These days, some Dutch people have tried to rebrand him any way they can, but it doesn’t always work. The strangest and most popular idea is to say that Pete’s not really black, he’s just a very dirty white person in desperate need of a shower—which somehow feels worse. 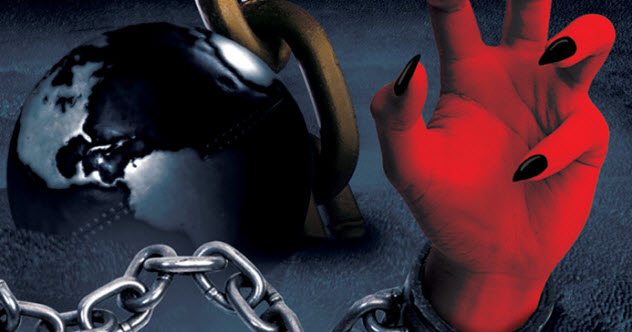 Black Pete might seem a little racist, but he sure beats Sinterklaas’s original helper. When Sinterklaas went to children’s homes in the Middle Ages, he took a different friend with him: Satan, the Prince of Darkness.

The details of this story are a little vague. All we know for sure is that, in the Middle Ages, Dutch people really liked drawing pictures of Sinterklaas dragging Satan around in chains.[3] There isn’t much written about it, so we can’t answer that pressing question in your head: Why in the hell did Sinterklaas think it would be a good idea to bring Satan with him while he sneaked into children’s homes?

This seems to be the start of the Black Pete story, though. After a while, people became uncomfortable with telling their children that Satan would be coming for them, so they switched him out for a black slave. Which still wasn’t right, but they didn’t initially see it that way. 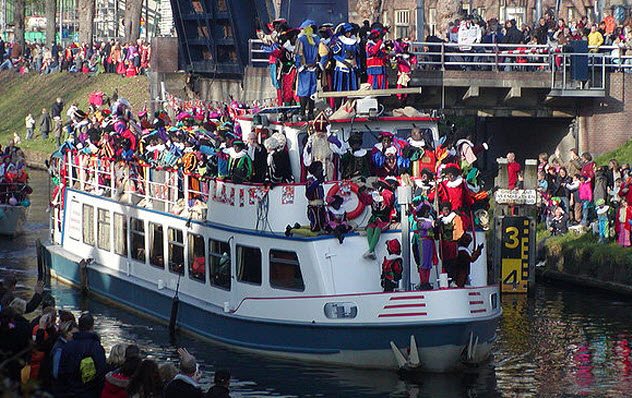 Sinterklaas doesn’t have some exotic home like the North Pole. He just lives in Spain. And he doesn’t come to the Netherlands on a flying sleigh. He charters a steamboat.

Nobody’s entirely sure why Sinterklaas, who’s based on the Turkish Saint Nicholas, became Spanish, but they’re fairly sure it has to do with a lot of people being confused about everything.

Either way, today he shows up on a boat. All the kids eagerly wait to see him and his black slaves pull up to the coast of Amsterdam. Then they follow him as he rides his horse through the town, making his slaves throw cookies at small children.[4] 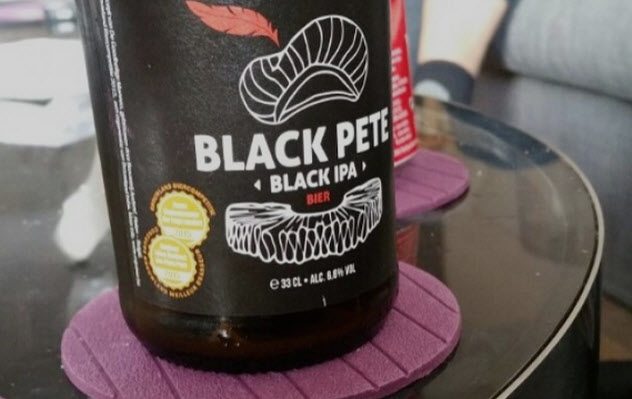 On December 5, the children get ready for the magical moment when Sinterklaas and his Black Petes will sneak into their homes and leave them presents. And so, waiting for his arrival, they leave their shoes by the fireplace so that he has a place to put his little gifts.

As it turns out, Black Pete is a hard-drinking man. It’s such a big part of his character that there are several seasonal “Black Pete” beers on the market in the Netherlands, all dark ales that often show a swarthy-looking man in blackface getting hammered out of his mind.[5] 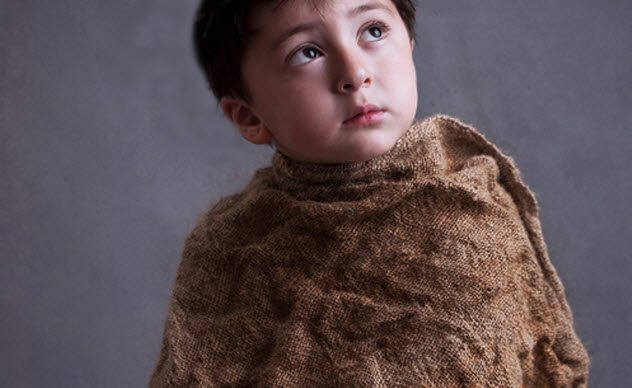 Not every child gets presents on Sinterklaas Day. If children have been bad, parents will leave the kids little notes from Sinterklaas warning them that they need to clean up their act—or else. Come December 5, if that child doesn’t start acting right, he’ll get something a lot worse than a lump of coal.

When climbing into kids’ homes, the Black Petes bring burlap sacks and broom handles. Their job is to track down any misbehaving children, throw them in the sack, beat them with the broom handle, and then drag them off to Spain. What happens there, no one knows for sure. But the children never return.[6]

Of course, parents never actually have their children beaten and shipped to Spain, but they can still leave kids with “bad presents.” If a child misbehaves, the parents can leave a broom handle in their child’s shoe and give him a firsthand glimpse of the fate he narrowly avoided—as long as the adults are comfortable with parenting through psychological terror.

4 Black Pete Isn’t Magic, He Just Breaks Into Your House 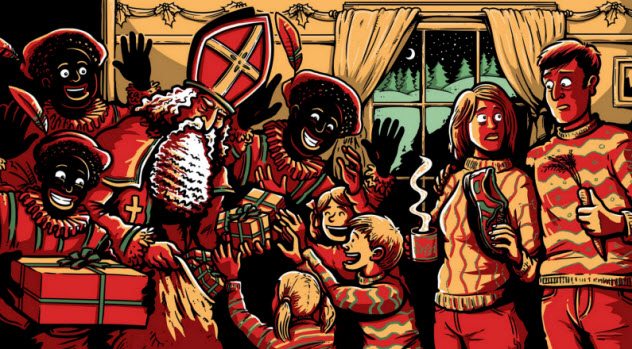 When Sinterklaas comes to the children’s homes, he doesn’t have any magical reindeer or supernatural powers to help him deliver toys to every boy and girl in the whole country. He only has one tool at his disposal: a massive network of slaves.

The Black Petes are usually in charge of getting the gifts into the house, but they just break in.[7] Traditionally, Black Pete will scale the wall of your home while Sinterklaas will ride his horse up. Then Black Pete will sneak down your chimney and start creeping through your things, looking to see if anyone left any liquor lying around.

That’s how Sinterklaas knows if you’ve been naughty or nice, too. The Black Petes will climb onto your rooftop, listen in on what you’re doing, and report back to Sinterklaas as to whether you deserve treats or should get the sack.

3 Parents Hire Professionals To Lie To Their Children 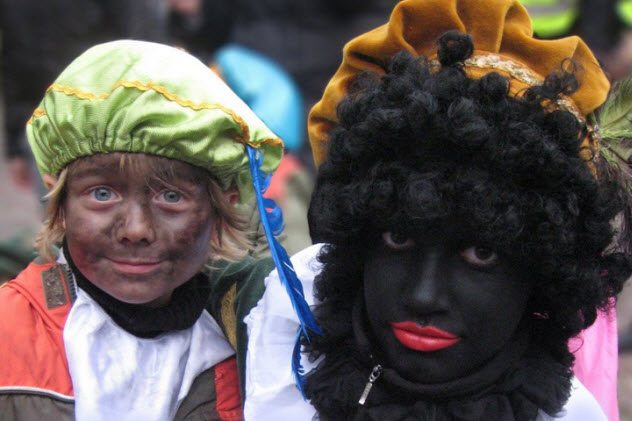 Parents around the world lie to their kids and tell them that Santa Claus is real. But the Dutch take it a little bit further. They hire actors.

In the Netherlands, there’s a whole guild of professional Black Pete impersonators whom you can hire to come into your home. It’s a big organization, too. There are more than 600 registered Black Petes in Amsterdam alone.[8]

It’s not uncommon for parents to hire a Black Pete to come to their home on December 5 or, if they’re on a budget, to have a neighbor put on the disguise. When the kids are getting ready for bed, the Black Pete impersonator will knock on the door, drop their presents in a burlap sack, and then run away—while letting the kids catch a glimpse of Sinterklaas’s helper running off into the night.

Which has to make it pretty hard for kids to figure out that Sinterklaas isn’t real. Because all those unanswerable questions—like “How does Santa deliver all those presents in one night?”—actually have an answer: a massive network of unpaid slave labor. The kids even get to see the slaves firsthand. 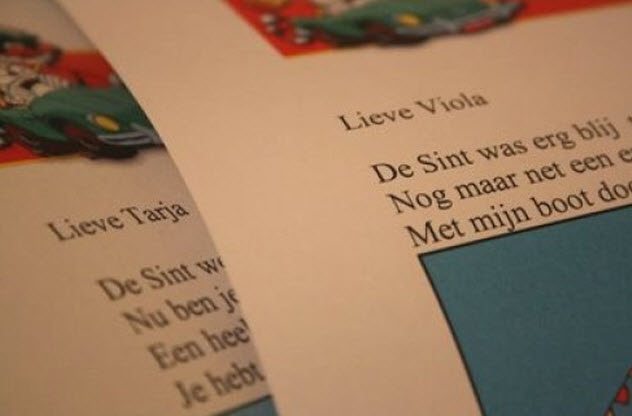 Presents aren’t the only things that Sinterklaas leaves. As a fun little bonus in the Netherlands, Santa Claus drops off a little something extra that is customized for a child: a poem that pokes fun at his failures.

It’s almost like a real-life Airing of Grievances. On Sinterklaas Day, people will give each other little four-line poems ridiculing each other for their bad habits or their character flaws. They might make fun of a friend for being too boastful or a child for struggling with her grammar homework.[9]

The parents will make poems for their children and sign them “Sinterklaas,” letting the kids believe that Sinterklaas is fed up with their nonsense. Come December 5, it’ll be there, next to the chocolate and presents—a tiny letter from a mythical being letting the kids know how they suck.

1 Luxembourg’s Version Is Even Worse 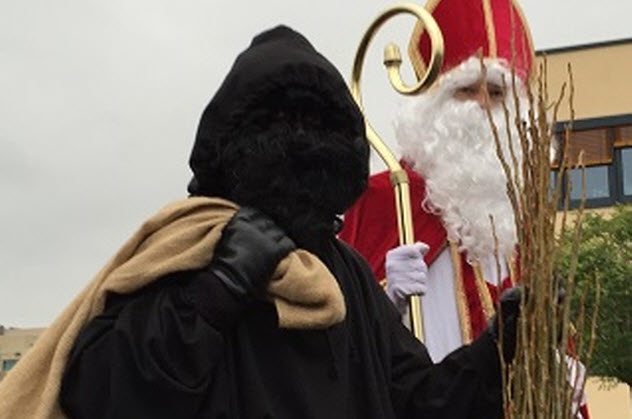 As strange as Sinterklaas Day is in the Netherlands, it’s a lot weirder in Luxembourg. There, people also receive visits from Sinterklaas, but he doesn’t bring the Black Petes to Luxembourg. Instead, Sinterklaas brings Houseker—and he’s terrifying.

Rather than dressing in bright, fun colors like the Black Petes, Houseker dresses in torn black robes that make him look like a dying beggar or the image of death itself. And instead of bringing cookies and treats for the good kids to eat, he just brings a stick and a temper.

His entire role is beating children. Houseker doesn’t give any gifts or march in any parade—he just beats kids with a stick.[10] That’s his whole thing. The best a child in Luxembourg can hope for is that Houseker will leave him alone.

Read about more weird Christmas traditions on 10 International Customs That Turn Christmas Into Halloween and 10 Strange Christmas Traditions From The Victorian Era.