This is the one white light in the sky you don’t want to go toward. And if you can’t figure that out on your own, the boom of thunder afterward should send you racing for cover. Then again, after you hear how a lightning strike dramatically changed an orthopedic surgeon, you may reconsider.

Throughout history, lightning has both fascinated and frightened us. It’s played a role in our religious beliefs and superstitions. As we delve into these little-known historical facts—some sparked by highly improbable disasters—you’ll see how lightning has sometimes impacted and even transformed cultures, science, and personal lives in extraordinary ways. 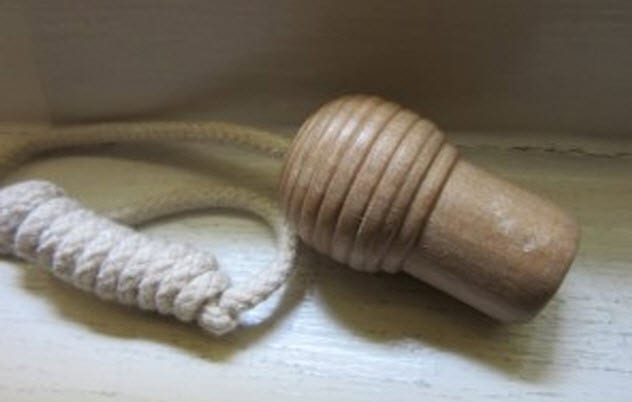 It has been said that lighting strikes oak more than other trees, so they became known as “lightning oaks.” The mere fact that little damage is caused to the tree, if not allowing it to flourish remarkably well, created a superstition that pieces of oak taken as souvenirs bring the individuals good luck and protection.[1]

Despite how incredible it may sound, such superstitious beliefs date back centuries to when folklorists deemed the acorn a survival tool to those in perilous weather. Given that acorns were now considered to provide protection, they were placed in windowsills to shield houses from being struck by lightning.

Even today, blind pulls in homes around the world are in the shape of acorns. Countless airmen also carry the oak nut with them as they take to the skies. 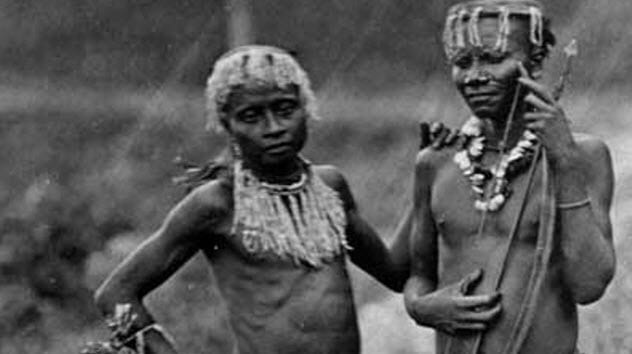 Recent archaeological studies of the Andaman Islands indicate that the indigenous people (Andamanese) had no means of making fire prior to the introduction of matches in the 19th century. The hunter-gatherer societies that made up the islands off the coast of India relied on keeping hearth fires and smoldering logs burning for future use.

What ignited such invaluable flames to keep their society warm and cook their meals came from none other than the thundering skies. When lightning struck a tree, the Andamanese hastily gathered at the site to collect embers to create a fire that would be preserved for as long as possible.

Lightning striking and igniting the trees of the island was not an everyday occurrence, so it was imperative to collect the embers swiftly during each and every storm. Although this was a difficult task, the means by which they did so has led scholars to consider the Andamanese the simplest society ever discovered by literate Europeans.[2] 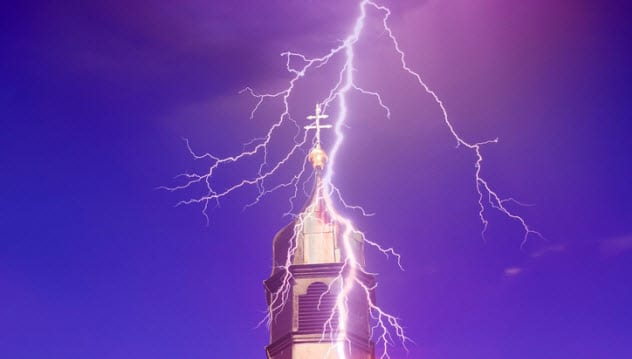 In his famous experiment, Benjamin Franklin demonstrated that lightning is a form of electricity while using a kite in a thunderstorm to collect an electrical charge. This led to his invention of the lightning rod in 1752.

The rod was used to protect buildings and ships. However, for centuries, religion had taught that lightning was God’s punishment and so Franklin’s invention was deemed “the heretical rod” (sacrilegious).

Due to such perilous archaic beliefs, churches refused to install the rods. Meanwhile, homes with the “heretical” invention attached to their roofs were spared while places of worship continued to be struck. In time, churches began to accept the idea that the rod was essential for deterring lighting strikes.[3]

Before this, countless churches sustained irreparable damage due to lightning. In some cases, there were tremendous casualties as well. Case in point: In 1769, a church in Brescia, Italy, exploded after lightning ignited an arsenal that was senselessly stored within the church, destroying much of the city and killing thousands of people.

7 A Sheep In Lion’s Clothing 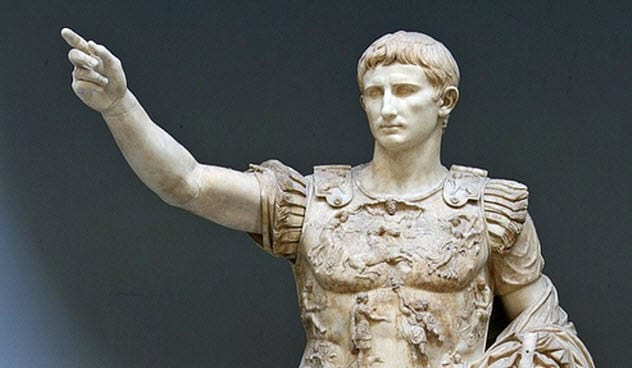 As Rome’s first emperor who transformed the republic into an empire, Augustus Caesar laid the foundation of the 200-year Roman Peace through institution-building, lawmaking, and triumphant military might. Despite being a victorious and valiant leader, Augustus had an overwhelming and perhaps juvenile fear of lightning.

While he was on a late-night Cantabrian expedition, a bolt of lightning lit up the sky, grazing his men. A slave carrying a torch beside Augustus was struck dead. This left a lasting and profound impact on the emperor, striking fear into his bones anytime a storm was brewing in the distance.

Due to his narrow escape, he eventually dedicated a shrine to Jupiter the Thunderer. However, for the rest of his days, he feared the sound of thunder. In fact, it often sent the audacious leader to seek refuge in underground vaulted rooms. If Augustus happened to be out roaming his empire—no pun intended—he made sure to carry sealskin as he believed it would protect him from the deafening Gods above.[4] 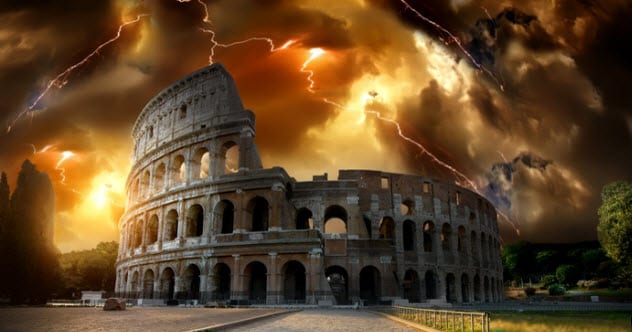 Rome’s iconic Flavian Amphitheater (aka the Colosseum) was constructed for a variety of events, most notably venationes (“hunts”) and the munera (“gladiator games“). After almost 10 years of construction, the amphitheater officially opened in AD 80, only to be nearly incinerated a little more than a century later.

In AD 217, lightning struck the wooden floors of the upper arena and caused the structure to collapse. In turn, this ignited the wooden structures below. The seven companies of the city’s fire brigade as well as the sailors of the Castra Misenatium were summoned to extinguish the ravaging flames that were consuming the Colosseum.

But they were unsuccessful in saving the structure. For the next five years, the circus was the temporary venue for the amphitheater’s shows. Despite the gates reopening in AD 222, the Colosseum remained unfinished for another 18 years.

Interestingly enough, Alexander Severus ordered that the taxes of prostitutes, pimps, and homosexuals be used to restore the amphitheater. Though there was no heavy damage, the Colosseum was struck by lightning once again less than a century later.[5] 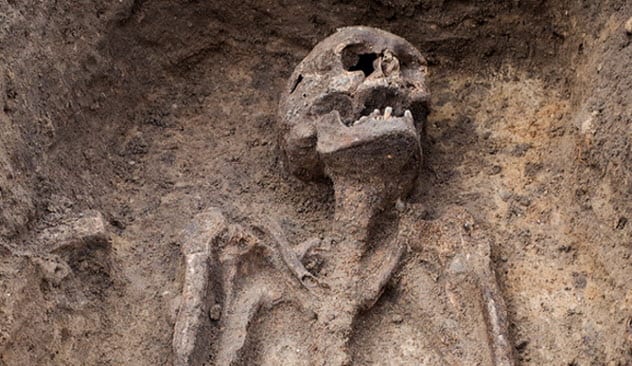 Much superstition has been derived from lightning over the centuries. In addition to the farcical myths already discussed, the early Greeks believed that lightning was a weapon of Zeus and that any spot struck was sacred. Thus, temples were erected at these sites.

Contrary to the Greeks’ belief, church bell ringers throughout early Europe created as much noise as possible in a futile attempt to ward off approaching storms because their holy dwellings were often struck by lightning. The Navajo tribe, on the other hand, associated lightning with rain, wind, and crop growth. They also believed that lightning contained extraordinary healing powers.[6]

Perhaps the most ludicrous belief lies with the Romans, who insisted that those killed by lightning must be buried on the spot. In fact, it was prohibited for anyone to lift the body above the knees, which denied the victim a proper burial ritual. If someone violated that law, then he would be sacrificed to Jupiter.

The life of Tony Cicoria, an orthopedic surgeon from New York, took a drastic turn following a lightning bolt to the face one cloudy afternoon in 1994. Cicoria vividly recalls the overwhelming feeling of peace as his soul hovered over his lifeless body. Moments later, he returned to reality.

The excruciating pain from the smoldering burns to his face and left foot faded in time, but the inexplicable aftereffects would be a blessing for the remainder of his life.[7]

For a man who was once indifferent to music, he was suddenly overwhelmed with an insatiable desire to play the piano. As if the surgeon was possessed by a powerful presence, Cicoria obsessively began playing music he heard in his head as eloquently and proficiently as any revered pianist of the last four centuries.

To date, neither Cicoria nor any neurologist can medically explain the events that opened the doors to the doctor’s newfound and exceptional musical talents. Cicoria’s out-of-body and near-death experience was undoubtedly transcendent and enormously significant.

Whether his musical transformation was due to an intense emotional arousal, a rush of noradrenalin, or simply a hallucinatory state, the surge of electricity resulted in an irrefutable talent not before realized and, perhaps, not to be questioned. 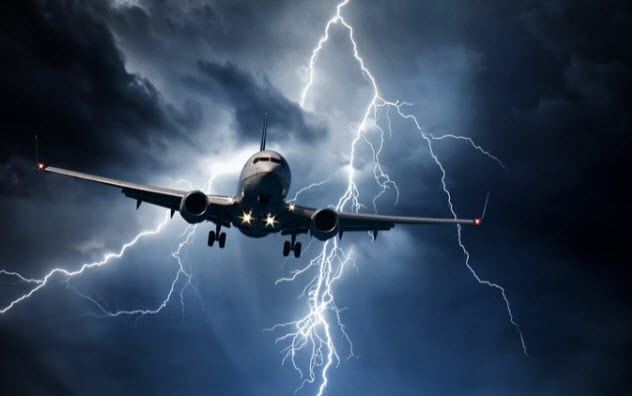 On average, each commercial airliner is struck by lightning once a year. Although catastrophes are rare these days, this was not the case prior to modern protection systems.

In 1971, a Lansa flight with 91 people aboard crashed in Peru after the right wing was torn off by a bolt of lightning, engulfing the doomed aircraft in flames as it plummeted to the ground. Four years earlier, 23 lives had been lost aboard a Lockheed jet flown by the Imperial Iranian Air Force, and in 1988, 21 occupants were killed aboard a German aircraft.

However, the worst airline disaster due to Mother Nature occurred in 1963 over Elkton, Maryland, when a Pan Am Boeing 707 carrying 81 people burst into flames after a “lightning-induced ignition” caused the fuel tank to explode.[8]

The National Transportation Safety Board sent urgent messages to the aviation industry in 1977 demanding a concerted effort to reduce damage from lightning strikes. Sadly, another nine years passed until the issue was formally addressed by NASA scientists in 1986. Over the next three decades, we learned much about airplane durability and the avoidance of damage from lightning strikes. 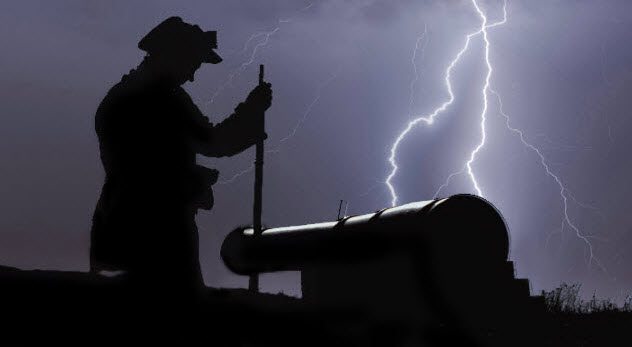 From 1899 to 1902, Dutch-speaking settlers and soldiers from the British Empire battled tirelessly in South Africa in what is known as the Second Boer War. In that three-year time span, 86 soldiers were killed or wounded not by their enemy but by a bolt of electricity surging from the sky.

Such was the case during the Revolutionary War when soldiers’ metal weapons—such as muskets, swords, and bayonets—served as magnets for lightning in the desolate fields during thunderstorms. In August 1776, three officers were killed together in a tent after several boxes of cartridges exploded due to an ignition from lightning. Later, in February 1778, future President John Adams was aboard the vessel Boston when a thunderbolt struck and killed three men on the deck.[9]

The Civil War was no different. In fact, several muskets and bayonets warped by lightning are on display at the Springfield Armory National Historic Site.

Although war casualties due to lightning do not compare to combat wounds or disease, the greatest loss of life from the skies above occurred in June 1807 when lightning struck a gunpowder factory in Luxembourg. As Napoleon’s army stockpiled weapons and ammunition in underground bunkers, lightning struck a fortress, causing a massive explosion that leveled two blocks in the city of Kirchberg and claimed the lives of over 300 people. 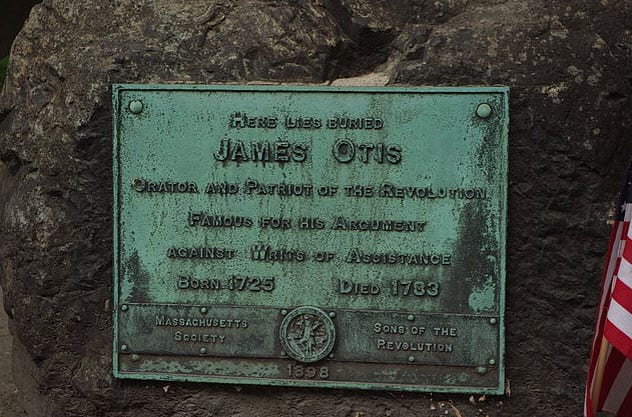 Shenandoah National Park ranger Roy Sullivan holds the undesirable Guinness World Record of being struck by lightning more than any other known person. His unfortunate and incomprehensible tale began in April 1942 when lightning burned a 1.2-centimeter (0.5 in) stripe down his right leg.

Over the next 35 years, Sullivan was struck a total of seven times. His last near-death experience came in June 1977 when a bolt to the head set fire to his hair and eyebrows. Surprisingly, Sullivan’s untimely death was not due to lightning but to a self-inflicted gunshot wound to the head in the early morning hours of September 28, 1983.

Although Sullivan holds the record for the number of times struck, perhaps the most significant figure whose life was actually claimed by lightning was James Otis Jr. A lawyer, statesman, patriot, and advocate of independence, he is best known for his impassioned speech at Faneuil Hall.

Eerily enough, Otis often expressed a desire to be killed by lightning, a morbid longing that was granted on May 23, 1783. His body was taken to Boston where it remains today in a large tomb at the Granary Burying Ground.[10]