The first full week of December managed to surprise nobody with the region its biggest news was poring out of. The Middle East was once again in the headlines and once again tilting toward chaos. We’ll cover the latest twist in the region’s saga below, alongside the crazy news flowing out of Washington, Africa, and all over Europe.

10 The US Recognized Jerusalem As Israel’s Capital 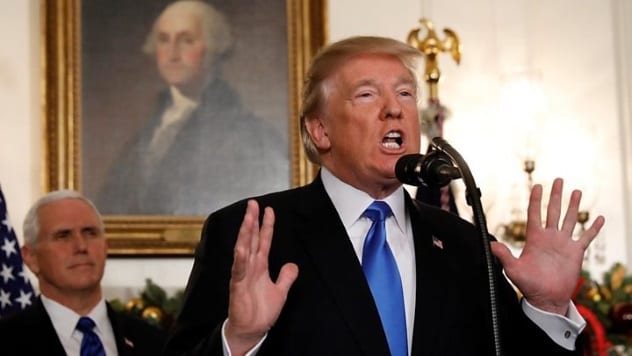 If anyone wants to write the definitive list of 2017’s controversial news stories, this will be a shoo-in for number one. On Wednesday, President Trump fulfilled a campaign promise to recognize Jerusalem as the capital of Israel, making the US the first country on Earth to do so, and pledged to move the US embassy there. In doing so, he kicked off a storm that threatens to destabilize the whole region.[1]

East Jerusalem is one of the most sensitive places on Earth. Captured from Jordan in the 1967 war, it is the claimed capital of both Israel and any future Palestinian state. Its Old City is coveted by Islam, Judaism, and Christianity, with an additional ethnic claim by Armenia. (Armenians are Christians but have a unique historical presence in the city.) As a result, the international community has not recognized it as belonging to anyone. Until now.

The president’s announcement was greeted with hostility from US allies in the Middle East. Turkey threatened to withdraw its recognition of Israel in retaliation. The UK and EU also criticized the move, saying it could lead to another intifada. 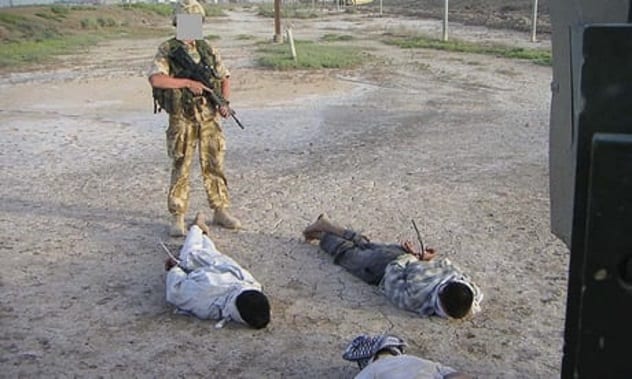 The International Criminal Court (ICC) is the world’s highest court. Having grown out of the International Criminal Tribunals for Yugoslavia and Rwanda, the court is tasked with prosecuting genocide, war crimes, and crimes against humanity. At the start of this year, it had conducted ten formal investigations in its lifetime, against nine countries. (The Central African Republic got investigated twice.) This week, it announced its intention to add a new country to that list: the United Kingdom.[2]

This is big news, not least because the ICC has only ever formally investigated one non-African state: the Caucasus nation of Georgia, over its 2008 war with Russia. The case against the UK will be focused on the mistreatment of detainees in Iraq. It would be the first time individuals from an OECD nation have been put in the dock.

It’s important to note the formal investigation has not actually begun and may yet be called off. However, that may be cold comfort to London. The ICC is also moving to begin a formal investigation into crimes committed in Afghanistan. One of the defendants in that case would also be the United Kingdom. 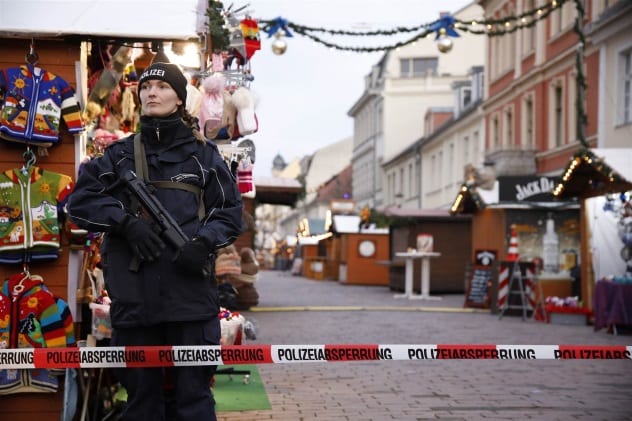 Remember the Dortmund bus bombing? In April this year, a bus carrying Germany’s Dortmund soccer team was attacked with a roadside bomb, injuring two. Although made to look like a terrorist attack, it quickly became clear that it was anything but. The guy behind it was a white collar criminal who staged the attack to make a killing off the effect it would have on the team’s share price.

At the time, we thought this was a one-off story. Apparently not. Last weekend, another “fake” terrorist attack caused panic in Germany. A bomb found at the Potsdam Christmas market turned out to be an elaborate attempt to scam delivery company DHL out of millions.[3]

The bomb was mailed via DHL, who then received a message threatening to detonate it unless they paid the bomber €10 million. The company refused. It was pure luck that the bomb was so shoddily made that it didn’t explode when it was opened.

The bomb was the third one mailed via DHL in the last few months. Strange as it seems, there’s more than one person in Germany willing to commit terrorism in the name of cash. 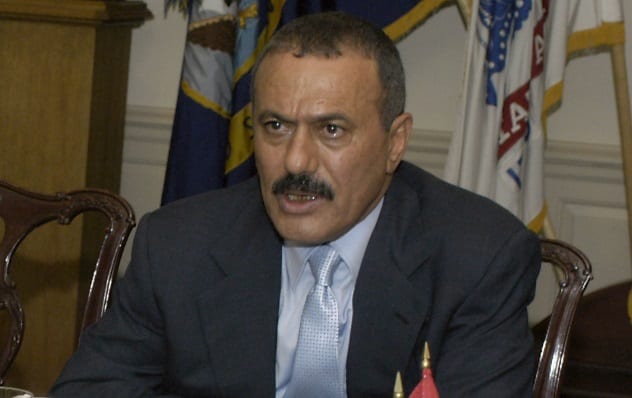 Former Yemeni president Ali Abdullah Saleh was until recently the slipperiest character in the Arab world. Ruling in Yemen from 1978 to 2012, he spent the last decade of his reign fighting Houthi rebels in a brutal civil war. Then came the Arab Spring. Chased out of power, Saleh switched sides, joined up with the Houthi, and helped launch the all-out assault that has left the country a ruined wasteland.

This week, the old snake tried to pull the same trick again. He offered to betray the Houthi and team up with their enemies, Saudi Arabia. Unfortunately for Saleh, he overplayed his hand this time. The Houthi caught wind of his plan, captured him as he tried to sneak out the country, and brutally executed him.[4] With Saleh suddenly gone, lasting peace in Yemen now looks more distant than ever.

Tyrant though he was, Saleh was at least good at juggling the demands of Yemen’s many tribes and ethnicities. Without his bridge-building skills, Yemen threatens to slide permanently into the endless sort of chaos that has affected Libya. 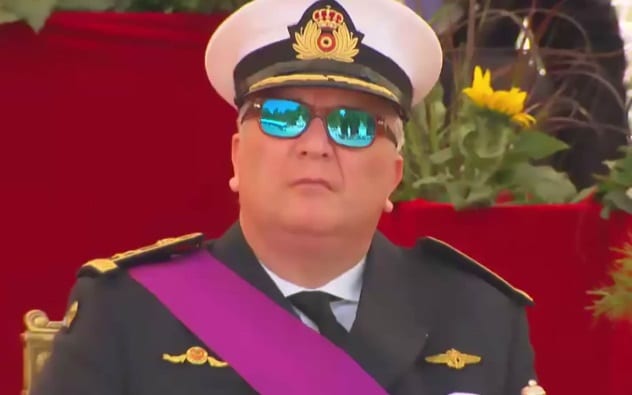 Meet Prince Laurent, the biggest snowflake prince Europe’s royal bloodlines ever produced. Brother of the Belgian king, Prince Laurent is a gaffe-prone walking PR disaster with none of the charm of Britain’s Prince Phillip and a strange habit of dressing like a 1980s South American dictator (complete with military uniform and ridiculous sunglasses).

Over the years, he’s swindled the taxpayers to pay for his children’s skiing holidays, been caught cavorting with Gadhafi’s son, become embroiled in shady business ventures in the Congo, and generally acted like a petulant toddler trapped in the body of an overweight middle-aged man. Last Friday, his whining reached new heights. After the Belgian government considered cutting his €308,000 annual allowance by 15 percent, the spoiled prince sued them for breaching his human rights.[5]

The case is unlikely to win him any friends in Belgium. The Flemish nationalists are gunning for his scalp, the king has effectively banned him from court, and the prime minister seems eager to bring him to heel. Failing that, there’s always revolution.

5 Cameroon Geared Up For Civil War 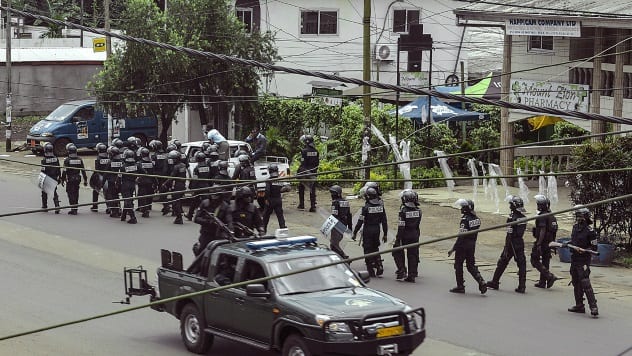 About two months ago, we told you how separatism protests in Cameroon were threatening to spiral into crisis. This week, that crisis may have finally arrived. Following the killing of six soldiers, President Paul Biya declared “war” on secessionist forces. In practical terms, this seems to have been code for ethnic cleansing of Cameroon’s anglophone regions.[6]

Cameroon is formed from two old colonies held by the French and British. While the majority in Cameroon today are French speakers, an English-speaking minority remains in two states by the Nigerian border. For years, the English speakers have felt ignored by their francophone rulers. Recently, they began to agitate for independence. Leader Sisiku Ayuk Tabe declared the establishment of a new state, Ambazonia. Yaounde disagreed and sent in the troops. All of this has led us to our current destination of violence and a looming civil conflict.

English speakers are currently fleeing across the border into Nigeria, hoping to escape the violence. Things may yet calm down. Or they may blow up into yet another devastating war.

4 Japan Set A Date For Its Emperor’s Abdication 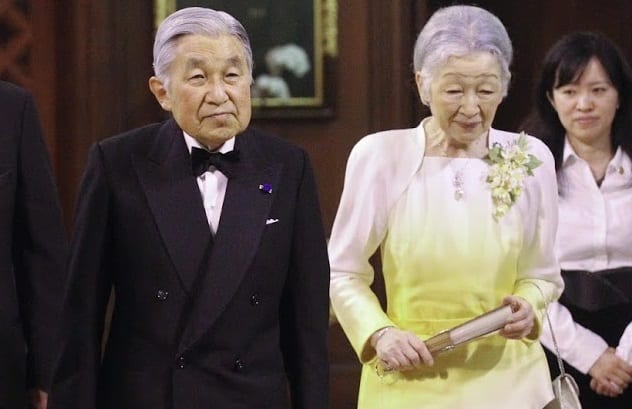 Remember Emperor Kokaku? Of course you don’t; he died in 1840. This huge gap of time between Kokaku and the present highlights just how unusual the news coming out of Japan has been. Last Friday, Tokyo set a date for Emperor Akihito’s coming abdication. He will be the first person to surrender the throne since Kokaku stepped down in 1817.[7]

Akihito rose to the throne after the death of his father, Hirohito, in 1989. Although hugely popular in Japan, he’s been gently campaigning to be allowed to step down for the past year. Since Japan has no mechanisms in place for dealing with this sort of thing, his wishes caused a minor crisis. It was only after a meeting between the government, the opposition, the imperial family, and the Supreme Court that it was agreed to let Akihito step down on April 30, 2019. On May 1, his son, Naruhito, will take his place.

This isn’t the last succession crisis Japan will likely face. Only males can inherit the throne, and Japan’s imperial family is mostly female. There are four eligible heirs left, one of whom is a child and one of whom is as old as Akihito. 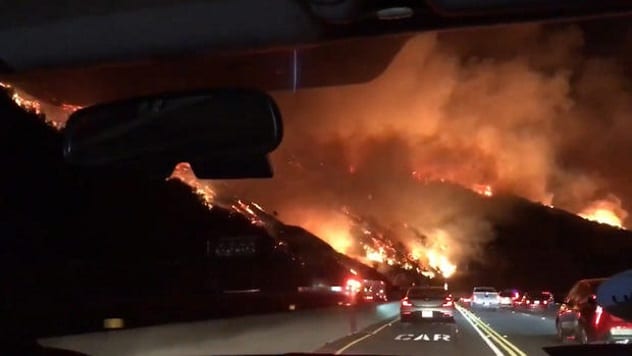 It’s been a bad year for wildfires in California. At least 43 people have been killed this season, many of them during a particularly brutal October. Now, the wildfires have returned. This time, they’re threatening the biggest Californian city of them all: Los Angeles.[8]

On Wednesday, fires were already raging across the limits of the city. By Thursday morning, they’d swept in, destroying buildings, overwhelming freeways, and threatening to do untold damage. One blaze, known as the Skirball Fire, hit the wealthy Bel Air neighborhood. The Getty Museum was threatened. Parts of the UCLA campus had to be evacuated. Thousands upon thousands were forced to flee. And still the fire raged.

By the time you read this, the fire may yet have spread further into the city and caused even more damage. We can only pray that California’s worst wildfire season in decades doesn’t end with the biggest catastrophe of them all. 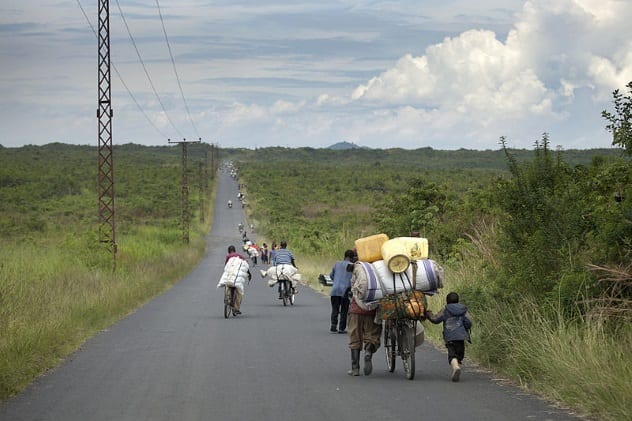 Worse than Yemen. Worse than Iraq. Worse even than Syria. That’s how aid agencies this week described the crisis underway in the Democratic Republic of the Congo (DRC), where 1.7 million people have become internal refugees since August. A cholera epidemic, a delayed election poll, new armed conflicts, and a resurgence of old armed groups have all contributed to what’s being called a “mega crisis.”

The DRC has effectively been floundering since a 1998–2003 civil war that killed over two million people. Each day, hundreds flee their homes, and dozens more are killed. But this year, things have stepped up a gear to that point where they’re now threatening nearby nations. On Tuesday, it was reported that the sheer number of refugees escaping over the border threatened to send neighboring Zambia spinning into a crisis of its own.[9]

Perhaps most striking of all is how underreported much of this violence has been. Everyone is aware of the wars in Syria, Yemen, and Libya, but the carnage in DRC goes largely ignored. 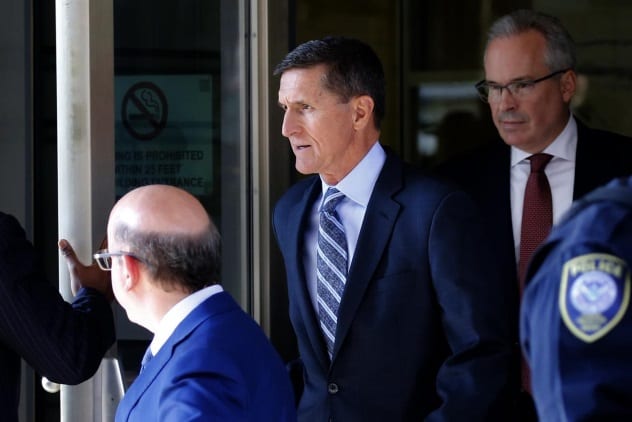 Despite all these other stories happening around the world, there was only one piece of news being talked about in Washington, DC, this week. Last Friday, disgraced former general Michael Flynn pleaded guilty to lying to the FBI. He subsequently struck a plea deal to provide Robert Mueller’s investigation into the Trump campaign with information. The capital exploded with speculation.[10]

Plea deals are only struck when prosecutors want to go after a bigger fish. To paraphrase a Politico report, Flynn is already a pretty big fish. If Mueller’s agreeing to go lightly on him, he must have someone especially important in his sights. After over half a year humming away in the background, his investigation is finally heading toward explosive, HBO series–worthy developments.

A lot of the rumors at the moment swirl around whether Flynn has something on the president. It’s certainly possible, but the smarter gossip seems to be zeroing in on Jared Kushner as the fish Mueller’s looking to fry. Whether there’s really anything there to find is another matter. But one thing’s for certain: We’re going to be seeing a lot more explosive headlines from Mueller and his team in the coming months.