Nearly everyone can remember a beloved pet they had for one reason or another. Maybe it was a gift from a long-departed relative or an animal which was a comfort for them as a child. Whatever the origin, animals have been important parts of many people’s lives.

Sometimes, that importance can’t be overstated. A number of people are only alive today because of the actions of their furry friends. This is a list of ten animals that made themselves memorable for saving their owner’s life. 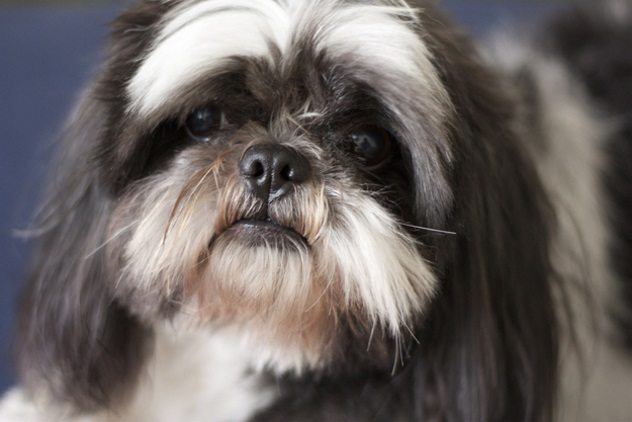 One of a number of similar stories that took place during the Tohoku earthquake and tsunami of March 11, 2011, Babu, a Shih Tzu, was living with her owner, 83-year-old Tami Akanuma, in Miyako, Japan.[1] Shortly after the earthquake struck, Babu signaled to Akanuma that she wanted to go on a walk. While it was earlier than the normal time, she obliged and took the dog outside. As they were heading out the door, the town’s tsunami warning system started blaring, and Akanuma felt the need to evacuate.

However, Babu began heading for a nearby hill, straining at her leash whenever Akanuma tried to guide her away. When they finally got to the top, which was nearly 1 kilometer (0.6 mi) from her home, Akanuma looked back and saw the devastation which had engulfed her town. Almost everything was destroyed, including Akanuma’s house, where she would have been had it not been for Babu. 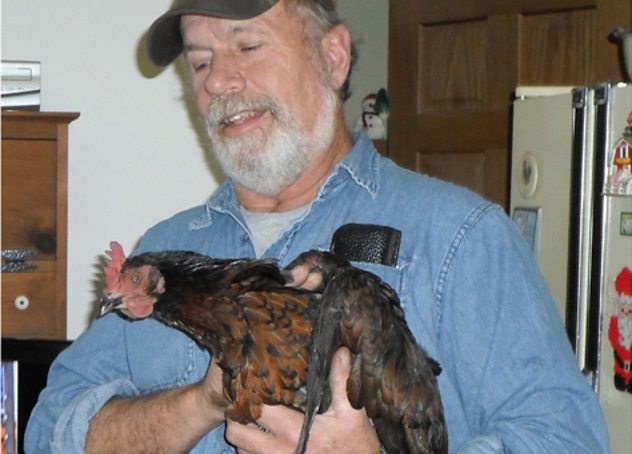 Cluck Cluck, a pet chicken of a family in Alma Center, Wisconsin, became a heroine on the morning of December 27, 2012.[2] Dennis Murawska and his wife Susan Cotey were sleeping when Cluck Cluck, who slept in the basement, woke them up at 6:15 AM. Finding it weird that she had become so vocal that early in the morning, Dennis got up to see what was bothering her. That’s when he discovered his garage was on fire, and it was spreading to the rest of his house. Unfortunately, the smoke detectors in the garage had failed to work properly and didn’t alert anyone of the blaze.

Dennis immediately woke his wife up, and they fled the house, narrowly escaping with their lives. Cluck Cluck was left behind, but firefighters later found her alive. In a twist of fate, Dennis’s neighbor was the original owner of the chicken and was going to kill her because she wasn’t producing any eggs. Dennis felt sorry for the chicken because she also had a mutated foot, and he asked his neighbor to let him keep her. 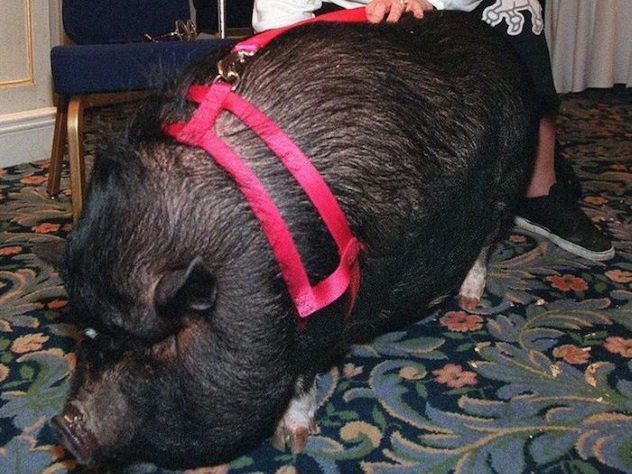 LuLu, a Vietnamese pot-bellied pig, was owned by an elderly couple in Presque Isle, Pennsylvania. She had originally belonged to the couple’s daughter, but after a lengthy stay at the Altsman residence, she changed owners. A huge specimen, tilting the scales at over 68 kilograms (150 lb), LuLu wasn’t known for anything other than her extreme penchant for jelly doughnuts. That all changed on August 4, 1998.[3] Jo Ann Altsman had suffered a heart attack nearly 18 months earlier and was at risk for another one, which she did have on a day when she was home alone.

Jo Ann called for help, but she was too far away from the road for anyone to hear. Her dog Bear was no help; he just sat there and barked. LuLu then sprang into action by crawling through the doggy door and wandering into the road, where she lay down. Eventually, someone stopped and followed LuLu back to Jo Ann, who was rushed to the hospital. LuLu’s reward: a great big jelly doughnut. 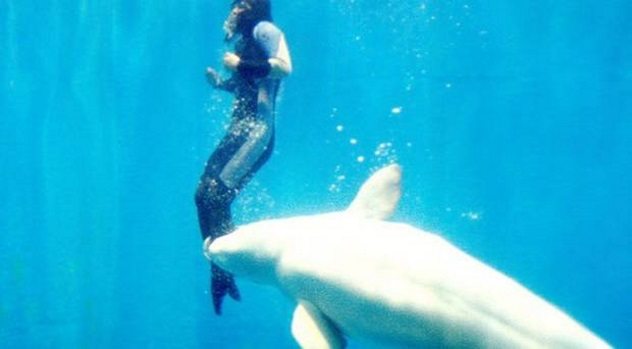 Mila, a captive beluga whale in Harbin, China, became a heroine in July 2009. At Polar Land, a competition was being held where divers would sink to the bottom of the 6-meter (20 ft) beluga whale tank, which was kept at frigid temperatures, and stay there as long as they could.[4] To make matters worse, this was a free diving competition, which means it was all done without the use of any breathing apparatus.

Yang Yun, a 26-year-old woman, was at the bottom of the tank when her legs became crippled due to the intense cold. She tried to swim to the surface, but she was unable to, and she began to feel herself running out of breath. Mila, noticing her troubles, grabbed one of Yun’s legs and pushed her to the surface. Beluga whales have naturally small teeth, so Yun was unharmed. Luckily, Yun survived and made a full recovery. 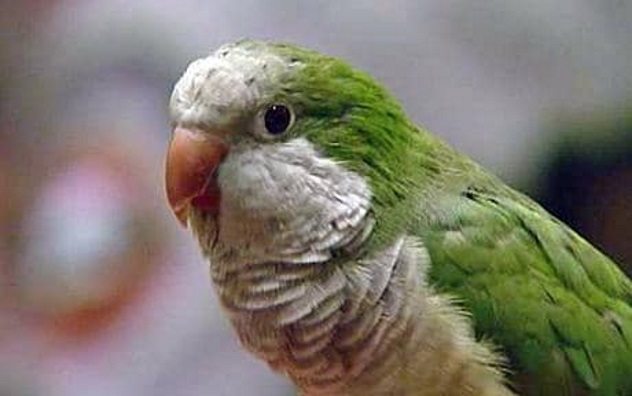 Willie, a Quaker parrot, was owned by a woman named Megan Howard in Denver, Colorado. One day in November 2008, when Howard was babysitting a toddler named Hannah, Willie noticed the child beginning to choke on her food. (Howard had just left the room to go to the bathroom.) He began flapping his wings, screaming out. When Howard came back to look at the bird, he started calling out “Mama baby” over and over again because the child had begun turning blue.[5]

She rushed over to Hannah just in time and dislodged the food from the toddler’s throat, saving her life. Willie was rewarded with the Red Cross’s Animal Lifesaver Award, the first parrot to receive that honor. Howard was later quoted as saying: “If [Willie hadn’t] warned me, I probably wouldn’t have come out of the bathroom in time because she was already turning blue, her lips were blue and everything.” 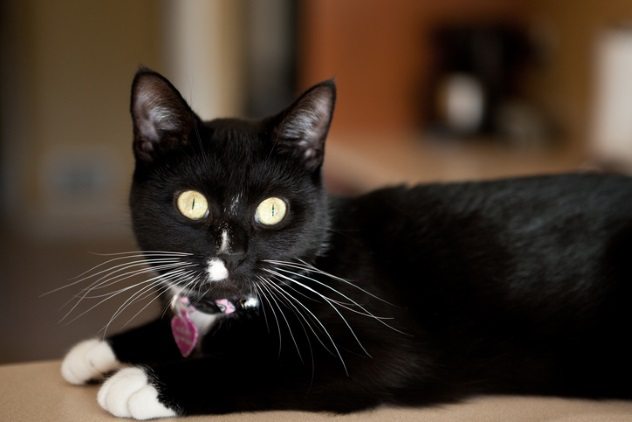 Inky was adopted by the Kruger family after she was left on a local cat lover’s porch, severely malnourished. Glen Kruger instantly fell in love with the three-month-old kitten and dutifully raised her, bringing her back to good health. That paid off on January 23, 2009, when Glen fell down his cellar stairs, breaking his arm and fracturing one of his vertebrae.[6]

Everyone else in the house was asleep and couldn’t hear his pleas for help, except for Inky, now seven years old. Glen told her to go get his wife Brenda, and she began scratching at the bedroom door. Brenda woke up, thinking the cat wanted to go outside, and noticed her husband at the foot of the cellar stairs. Glen was permanently disabled from the accident, losing over four inches in height, but he survived thanks to the quick actions of Inky. 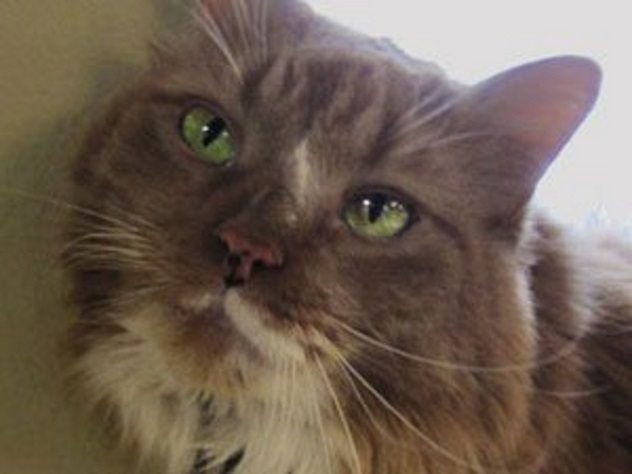 Pudding, an eight-year-old cat, had been given up for adoption. When Amy Jung, a Sturgeon Bay, Wisconsin, resident, saw him, she fell in love and decided to adopt him on the spot.[7] It turned out to be one of the most important decisions she’d ever make. To make this situation even more serendipitous, Jung hadn’t intended on adopting a cat; she had just brought her son to play with the cats, who are allowed to roam the shelter unabated.

On February 8, 2012, Jung brought Pudding home and went to bed around 9:30 that night. However, she was a diabetic and wasn’t aware that her blood sugar was too low. She began to have a diabetic seizure. Pudding sprang into action and woke her up. When she couldn’t move, he ran to her son’s room and woke him up. The eight-year-old phoned his father and, using his dad’s instructions, injected his mother with the lifesaving medication she needed. Jung says Pudding still meows whenever her blood sugar gets too low, pestering her until she takes her medicine. 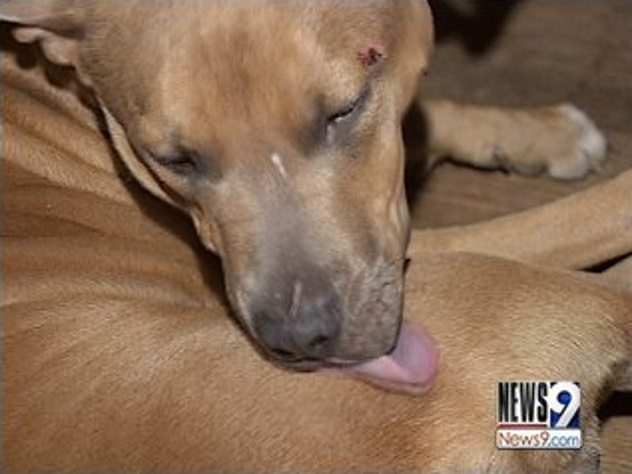 D-boy, a rescued pit bull, was living with her new family in Oklahoma City, having only been adopted three months earlier.[8] In 2008, Roberta Trawick and her family were sitting on their living room couch when an armed man broke into their house and ordered them to get on the ground. D-boy burst in from an adjoining room, defending the Trawicks by attacking the intruder.

Before he could reach the man, the dog was shot three times, including twice in the head. Nevertheless, the intruder was spooked and fled, while D-boy was taken to an emergency veterinary hospital. The doctors were able to remove the bullets and save his life. The vet credited D-boy’s hard head with keeping him alive. He was later given the Human Society’s People’s Hero Award for his bravery. In addition, thanks to the generosity of the community, D-boy’s medical bills were paid in full. 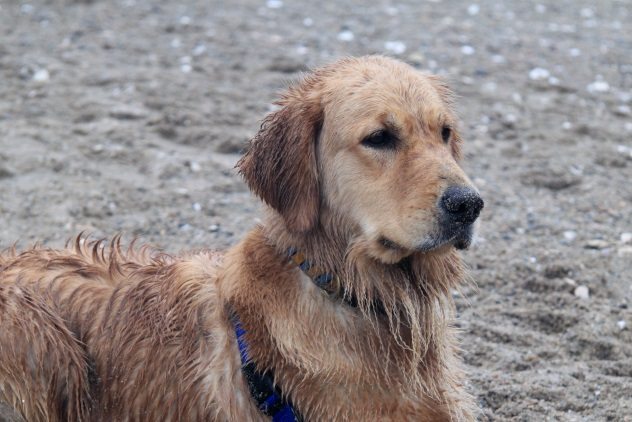 Never has there been a more appropriate name for a pet. On a dark night in British Columbia on January 2, 2010, Angel, an 18-month-old golden retriever, was walking with her owner, 11-year-old Austin Forman.[9] Austin was collecting wood for his family’s furnace. Instead of playfully jumping around, Angel was oddly quiet, sticking close by her owner. Without warning, a cougar leaped out at Austin, and Angel jumped in between them to protect him.

The big cat latched onto the dog’s head, and Austin ran to tell his mother to call the police. When the local constable arrived, he shot at the cougar twice, killing it. Austin’s cousin then had to go in and pull the dead cougar off of the golden retriever, as she was drowning in blood. Angel was rushed to the veterinarian and underwent an hour’s worth of surgery to repair her fractured skull. She recovered fully and was rewarded with a “nice juicy steak.” 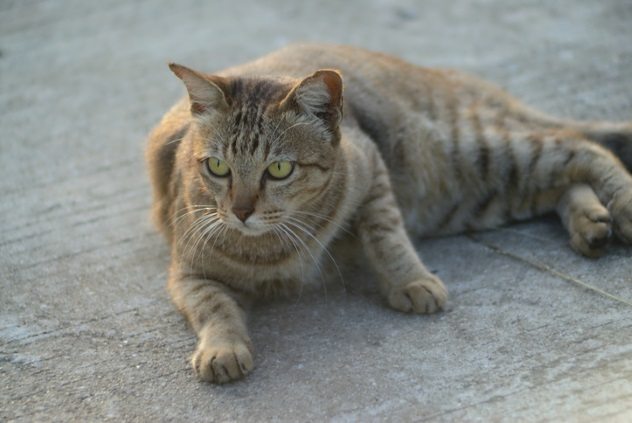 Baby, a 13-year-old tabby, lived with her owners Josh Ornberg and Letitia Kovalovsky in a Chicago suburb. She also saved their lives on the night of January 25, 2010. Ornberg and Kovalovsky, who was seven months pregnant at the time, were asleep in their home when a fire started. Baby sprang into action and began jumping on her owners, an action the pair had never seen before.

The couple then noticed the fire in their bedroom and called 911 after failing to put it out with home fire extinguishers.[10] Luckily, everyone, including Baby, made it out of the house unharmed. Baby herself fled the scene, going missing for a while, though she was later reunited with her owners.

Read about more heroic animals on 10 Incredible Rescues By Dogs That Will Warm Your Heart and 10 Heroic Cats Who Could Teach Lassie A Thing Or Two.