There is an old saying that “curiosity killed the cat.” Anyone who has ever had a cat as a pet can attest to the strange places that they like to explore, sleep, and play.

But what happens when these odd hiding places become a cat’s undoing? Luckily for these animals, their nine lives weren’t used up. Here are 10 stories of cats whose lives were saved in really unusual ways. 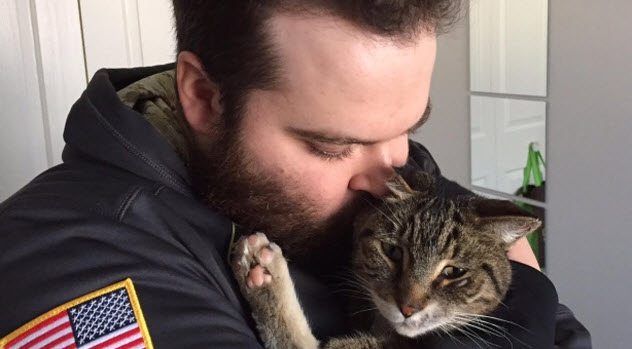 It was 5:00 AM on a frigid -35 degrees Celsius (-31 °F) December 2016 morning in Alberta, Canada. Brad Slater, an employee of the Canadian National Railway, was examining the engine of a train when he heard a cat crying. He looked inside the engine and found a cat that was partially frozen, hiding inside the train engine for warmth.

Brad scooped up the freezing cat and wrapped him in a T-shirt. During the ride back to Edmonton, Brad peeled ice off the cat and fed him water. Brad even pre-chewed beef jerky so that the cat would have something soft to eat. Brad decided to adopt the animal and gave the cat the name “Q199” after the name of the train where he was found.[1]

The story of Q199’s rescue was all over the news. A woman named Lynn Hahn in Saskatchewan recognized him as her cat, whose real name was Tiger. She had adopted the cat after finding him hanging around the train yard, where she used to work. Tiger must have decided to hitch a ride on the train, traveling hundreds of miles away from home. Tiger was reunited with Lynn, and Brad was given an award from PETA. 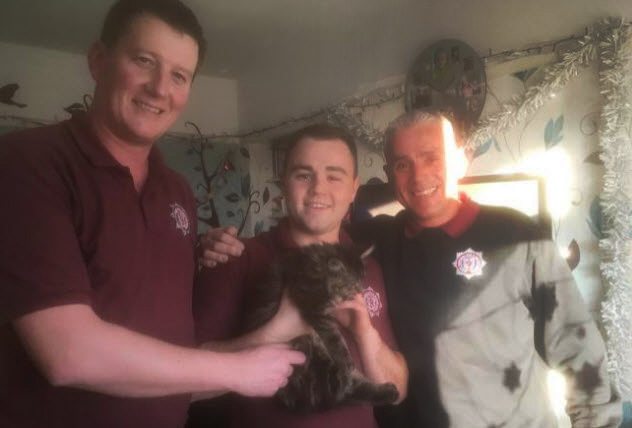 Kittens love to explore their surroundings when they are getting adjusted to a new home, and it can often get them into trouble. Coco was a curious 12-week-old kitten who was exploring her new North Yorkshire home in the United Kingdom in 2017. She crawled underneath the living room sofa and never emerged. The owners could hear their kitten’s mews coming from inside the couch, and yet they had no way of coaxing her out.

Coco’s owners called the North Yorkshire Fire and Rescue team, who used bolt cutters and hacksaws to completely dismantle the couch to free the kitten. It turns out that her head was stuck in between one of the mechanisms on the inside of the couch.

Thankfully, Coco emerged without any injuries, and the rescue team posed for the local news in a victorious photo with the cat. There was no harm done, except for the fact that the family needs to buy a new couch.[2] 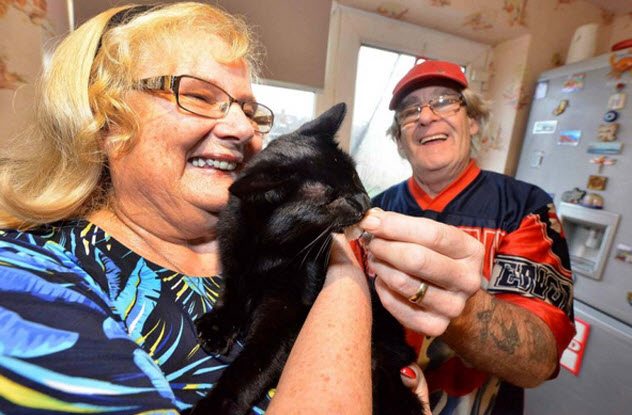 It was just like any other day when 72-year-old Rae Sutton started a load of laundry at her home in the West Midlands, United Kingdom, in late 2017. After 30 minutes, the wash was done. She reached her hand in to retrieve her clothes and pulled out a clump of fur instead. Rae was horrified to see the lifeless body of her nine-month-old cat, Tiggy, in the machine with the damp laundry.

In a desperate last-ditch effort, Rae gave Tiggy mouth-to-mouth resuscitation and massaged his stomach. It actually worked. Tiggy began breathing again. She rushed him to the veterinary hospital, where he was in a coma due to head injuries. In just two hours, Tiggy woke up, and Rae brought him home to recover.[3]

Shockingly, this was not an isolated incident. There have been at least two other recorded incidents where pet owners have accidentally washed their cats along with the laundry, proving that it’s best to double-check before hitting the “start” button.

A black house cat in Los Angeles named Zion was accidentally let out of his owner’s home by a guest during a party in late 2017. Zion had never been allowed outside before, so he was unfamiliar with the surrounding territory and walked off a steep cliff.

The owners could hear his meows for help, but they had no way of reaching him. They called 911, who sent in the “SMART” squad, which stands for “Specialized Mobile Animal Rescue Team.” They specialize in nearly impossible animal rescues that even the fire department isn’t equipped to handle.

Zion clutched the edge of the cliff with his claws, suspended over 30 meters (100 ft) off the ground. Members of the SMART team had to rappel down the side of the cliff with mountain climbing gear and nets, and they filmed the entire rescue with GoPro cameras on their helmets.

Zion wasn’t very happy to be snatched up by strangers and trapped inside a net, but he was returned to his owners safe and sound.[4]

Nearly Dead Kitten Found Frozen In The Snow and SAVED!

In late November 2015, 0.3 meters (1 ft) of snow fell in Garden City, Utah, on the night before Thanksgiving. The Bingham family woke up to see the winter wonderland, and the children wanted to play outside.

One of the children was horrified to stumble over the body of a tiny, frozen, white kitten. Its blue eyes were wide open and unresponsive. Everyone assumed that the kitten was dead, except that it had a small amount of body heat left and its body wasn’t stiff.

Branden Bingham jumped into action, bringing the kitten inside near the fire to perform CPR. Miraculously, the kitten came back to life. They decided to name him “Lazarus.”

The family posted the above video about the cat’s rescue on YouTube, and it got over five million views. People loved the story of Lazarus so much that his new owner dedicated an entire YouTube channel to him.[5] Surprisingly, Lazarus loves to play in the snow. 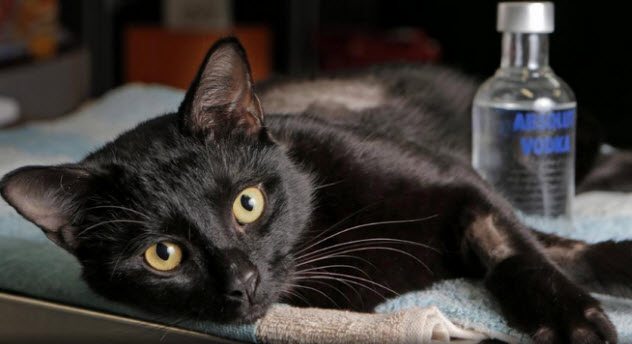 In July 2017, a black cat was discovered at a mechanic’s tire shop in Brisbane, Australia. Convulsing and barely breathing, the poor animal was lying on the ground. The workers at the tire shop rushed the cat to RSPCA animal hospital.

Veterinarian Sarah Kanther realized from the cat’s symptoms that he must have accidentally drunk antifreeze. The only cure for antifreeze poisoning for the cat would be an IV drip of alcohol, and there was only a one-hour window to save his life.

When one of the nurses heard this, she perked up and rushed to her bag. She just happened to have a bottle of Absolut Vodka in her purse. After receiving the 20-milliter (0.68 oz) vodka treatment, Dr. Kanther said that the cat was clearly drunk. So they decided to name him “Tipsy.” The RSPCA hoped to find his owner, but if no one came forward, they planned to put him up for adoption.[6] 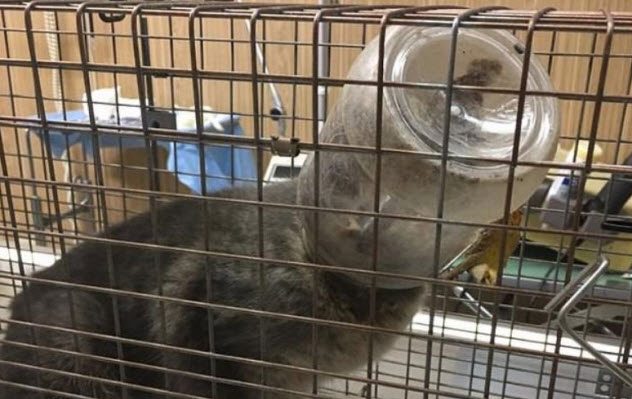 Linda Ruggere from Wilkes-Barre, Pennsylvania, fed the stray cats in her neighborhood on a regular basis. She was used to seeing all kinds of cats come and go from her property. But one day in November 2017, she was shocked to see one cat walking around with his head stuck inside a glass mayonnaise jar.

It was meowing and begging Linda for food. But obviously, he couldn’t eat with the jar over his head. Linda tried to catch the cat for a couple days straight, but she didn’t have any luck removing the glass jar from around his neck on her own.[7]

It was clear that he would need an operation to remove the glass bottle from around his neck. A nonprofit animal rescue group called Whiskers World caught the feral cat and brought him to a local animal hospital, where the veterinarian was able to remove the jar. They decided to name him “Miracle.” 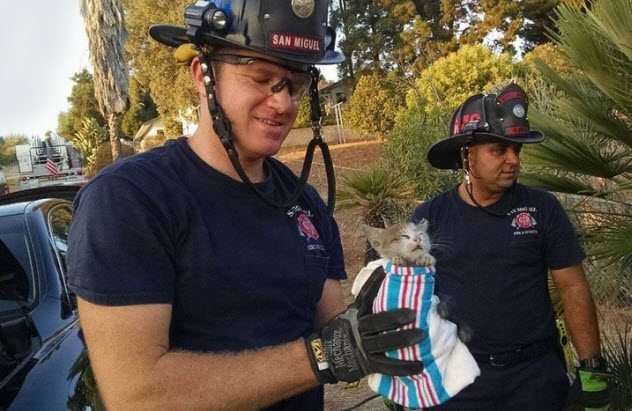 In September 2017, Adrienne Koroly drove his Lexus to his parent’s home in Moreno Valley, California. When he stepped out of the car, he heard a faint meowing. He was shocked to realize that the meowing was coming from his car engine.

There was a little kitten stuck inside, who most likely hid there for warmth. Over the next few days, Adrienne and his parents tried to coax the kitten out with food and milk, but it wasn’t leaving the engine.

They had to call in the local fire department, which used air balloons to lift up the car. A mechanic had to remove parts from the bottom of the vehicle to be able to reach the tiny kitten.[8]

After over an hour of work, the hungry kitten was officially rescued. They named it “Lexus” and brought it to the nearest veterinarian. Soon after, one of the Koroly’s neighbors adopted Lexus as their pet. 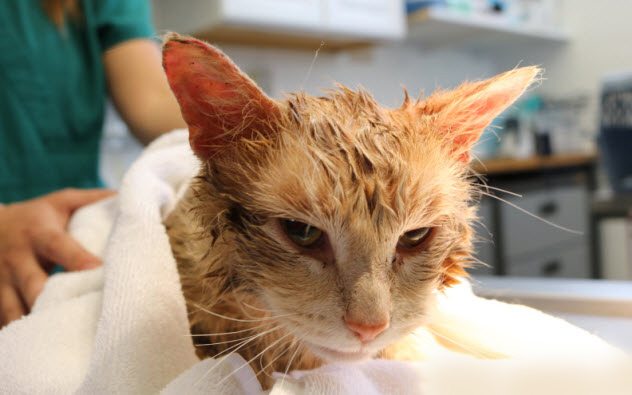 The Humane Society in Dayton, Ohio, was called in after a report that a ginger cat had somehow managed to get its head stuck inside a fencing pipe in a cement block. The cat tried to wriggle free and damaged its paws against the cement in the process. After trying to chip away the cement, the Humane Society realized that they needed to call the local fire department for help if they wanted to save the cat.

The Dayton Humane Society sedated the cat and then carried it with the large cement chunk and pipe to the fire department. Once they arrived, several workers at the department spent more than two hours sawing their way down to the cat before it was set free.[9]

After the ordeal was over, the Humane Society made sure that the cat got the proper medical care. They named him “Piper” before putting him up for adoption. 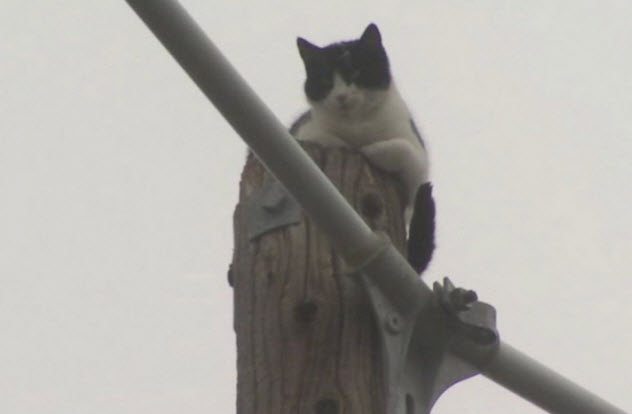 No one is surprised to hear about a cat getting stuck in a tree and the fire department showing up to save him. One cat named “Fat Boy” from California took his climbing adventure to new heights when his owners discovered that he was perched at the top of a 14-meter-high (45 ft) power pole.

His owners tried to coax him down for over a week by offering food, but the cat had truly become stuck in an impossible situation. Since he was surrounded by high-voltage wires, not even the fire department could get the cat down.[10]

Eventually, the power company showed up to save Fat Boy. They had to turn off the power for 250 homes in the surrounding area to retrieve him. Once he was safely on the ground, he was given food and water and a veterinarian injected him with electrolytes to help with his dehydration.