Ancient Rome and Greece are often cited as the birthplace of Western culture and the cradle of amazing thinkers and artists to whom we all aspire. Because of this, the less admirable qualities of these ancient civilizations have been mostly forgotten in favor of the beautiful but romanticized view of those countries and governments.

There was more to Rome than art and philosophy, and there was more to Greece than sculpture and debate. Hollywood tends to focus more on the Parthenon and the Roman Senate than the following ten things. What you read below might make you very glad to have never set foot in the world of Socrates or Caesar. 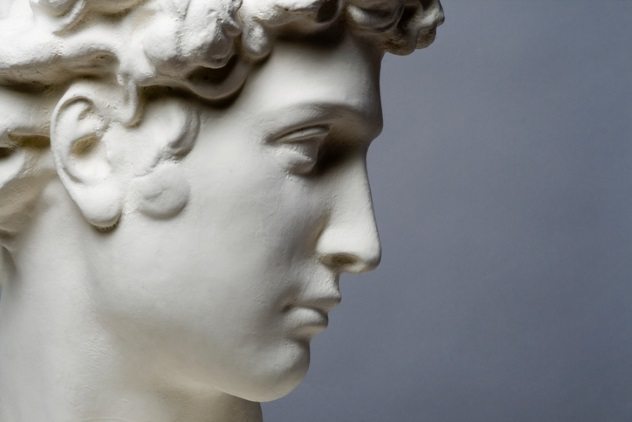 The pater familias was the name of the leader of a Roman household, typically the eldest man or most noble birth in the family. The benign duty of protecting the family fell to the pater familias, but the power implicit in the position often led to monstrous consequences for those beneath the patriarch. In efforts to protect the family name, the pater familias had the right to sell any child into slavery, expel wives from the property, and generally control every bit of land and material wealth the family possessed.[1] This didn’t apply only to the immediate household, either; the familia included extended family, all the way down to servants, clients, and concubines.

This familia was the basic unit of Roman society, and the patriarchal rule of that unit was completely absolute. The pater familias was technically the sole owner of all land and goods the family possessed. This created what was, in essence, a miniature government within each extended family that greatly resembled a dictatorship. Even while dominated by the Roman government, most were doubly ruled by the Roman leadership and their own personal tyrant.

9 The Government Cared About Your Character A Little Too Much 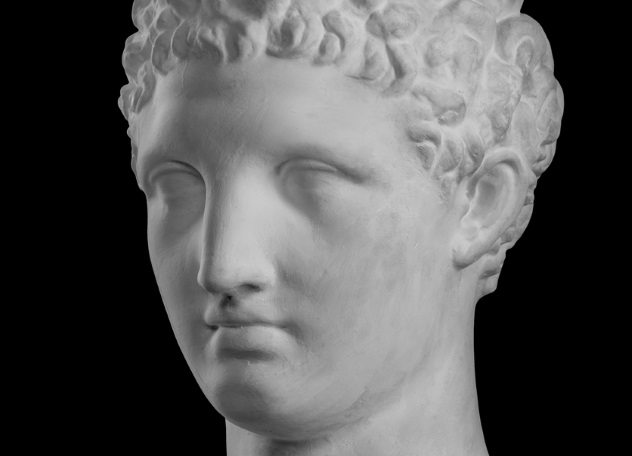 One of the most significant political positions in the Roman government was that of the censor. A censor’s obligations included preserving public morals, keeping the census, and managing finances for the state.[2] This was a coveted position for people already high up in the hierarchy of Roman society and politics, who saw it as the final and best career for a devoted citizen. The majority of the power of the censor came from their duty to legislate morality. Information could be entered into the census by the censor about the morality of a person or family, which could lead to dire consequences. These accusations, black marks on the name of the accused, could mean loss of the right to vote, expulsion from high society, or overall reduction in rank.

The vices the censor typically punished included anything which would be antithetical to Roman philosophy, namely an overly indulgent lifestyle, mistreatment of slaves, fraud, or general disreputable behavior. Family names could be ruined and people thrown into poverty based on the moral decisions of the censor, who always promoted patriotism to the state. Because morality became interwoven with law, the censor became just another instrument of rule over the people, an untouchable individual with the right to all your secrets and the key to your reputation. This Orwellian system had no space for argument over moral ambiguity or the the privacy of individuals. No one was immune to the censor’s eye, and the stakes were intense. Everyone was under scrutiny at all times, and everyone had everything to lose.

8 Conquest In The Name Of Slavery 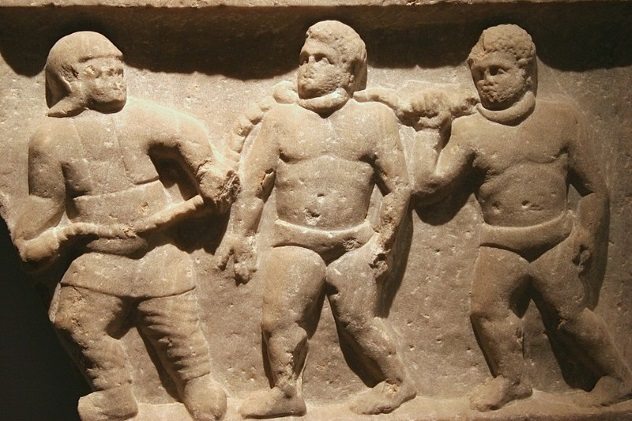 Although it’s true that many countries have relied on slaves at different points in their history, the Roman dependence on slave labor is remarkable. As many as 30 percent of the Roman population consisted of slaves at one point, and to exaggerate the issue, slaves died more frequently than they were born.

In order to maintain the slave numbers and keep the labor force, the Romans needed to continually conquer and absorb more slaves. Even this tactic barely sated the need for them. The system, beyond cruel, was terribly inefficient and a waste of human life.[3]

7 No Mercy From Rome 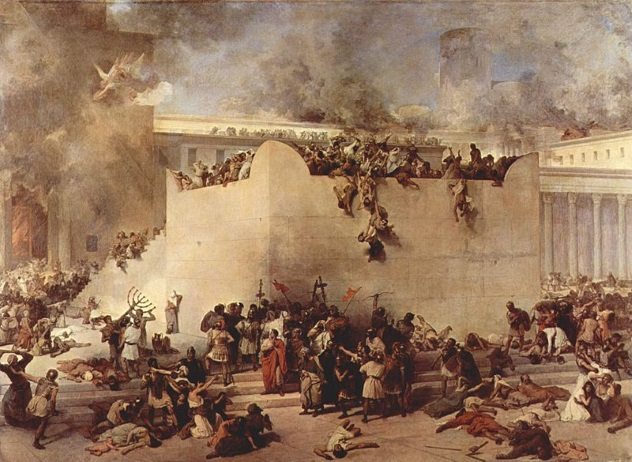 The Jewish people were in some ways respected by the Romans because of the antiquity of their beliefs, although disliked. Simply put, they were generally manageable, although occasionally problematic, for the Roman Empire. They were an outlier among the polytheistic groups and governments around them, and they refused complete assimilation.

Although typically obedient, when the Jewish people did demonstrate political dissent, they were crushed. The Romans killed thousands of Jews and destroyed their most sacred temple in AD 70, setting an example for how they treat insurrection and how they would soon treat Christian groups. The Romans did this frequently; every single rebellion was treated with severity, and the offenders were often completely decimated.[4]

6 Be Patriotic Or Die 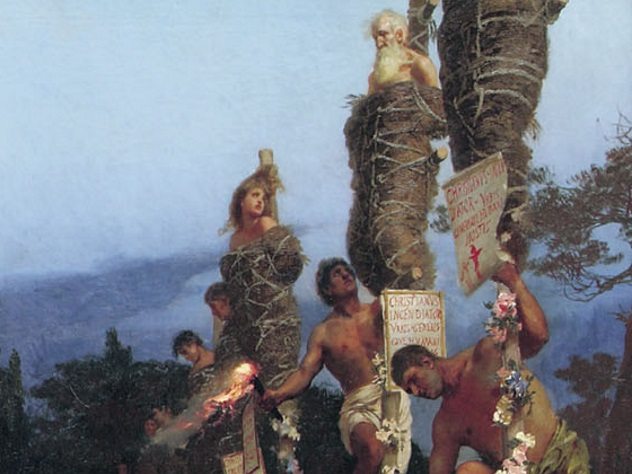 It should be noted that the Romans did not discriminate based on religion but rather on patriotism. What this means is the Romans did not care who you worshiped so long as you were a good citizen who payed tribute to the leaders. The problem comes when groups like the Christian sects want to meet in private, are growing in number, and refuse to participate in certain rituals which they deem heretical. The Romans perceived religion as a method of maintaining patriotism in the state and used common religious practices to validate Roman rulers and laws. Outsiders like Christians created division and dissent, which the Romans saw as threatening. In doing so, Christians became a persecuted group.

From Nero to Diocletian, Romans killed and tortured enormous numbers of Christians. They humiliated and murdered them both individually and in groups, in front of crowds or openly in the streets. The Romans demonstrated the level of cruelty they could achieve when desperate to squash a threat to their order and created a dystopia where minority beliefs are punishable in imaginative and horrific ways.[5]

5 The Price Of High Society Was Consent 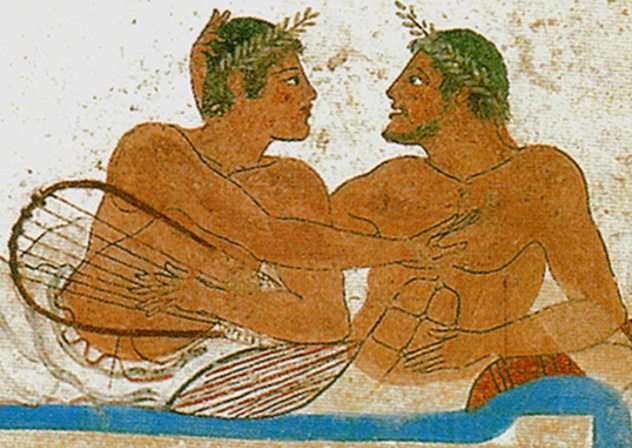 Aristocratic Greek boys aged 12 to 15 were often provided with a mentor, an older man who was to teach them how to be successful and cultured. Unfortunately, these pairings frequently became more than tutelage; sexual relationships were actually encouraged between the two and completely accepted by the culture. Rights to the young boy were given to the older man for his prowess and in return for his mentorship.

These relationships, sometimes taking place even before the boys hit puberty, were absolutely not consensual but were not resisted, as it was simply seen as part of the social order. Many Greeks would have claimed love for their partner in this mentoring relationship, but it was never the result of free will for the younger participant. In this way, Greek culture terrorized younger noblemen and exploited them for perverted gain, creating a universe which can only be described as frightening.[6] 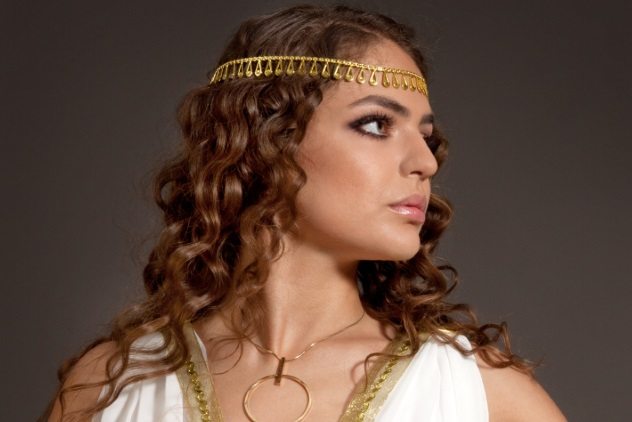 The separation of Greek girls and women from society as a whole was akin to a life of solitary confinement. Girls existed entirely within the home until they were married, at which point they moved into their husband’s home for a very similar situation. They could run the occasional errand or attend ceremonies (if accompanied), but the vast majority of their life was spent indoors and nearly alone.[7] Women could spend time with their children and their servants in rooms designated specially for them and could enter the public area of the house to receive visitors only if their husbands allowed it.

Girls were often married at the age of 14, and slave girls were the sexual property of their male masters, as well as the subject of ire of the master’s wife. No female, slave, poor, noble, or middle class, was free, and each suffered under the philosophy that women were merely poorly made men, disfigured and unintelligent, who should be kept in locked rooms for their own safety. This world was a true nightmare for the many women who lived in it and created what was essentially the life of a prisoner for every single female. 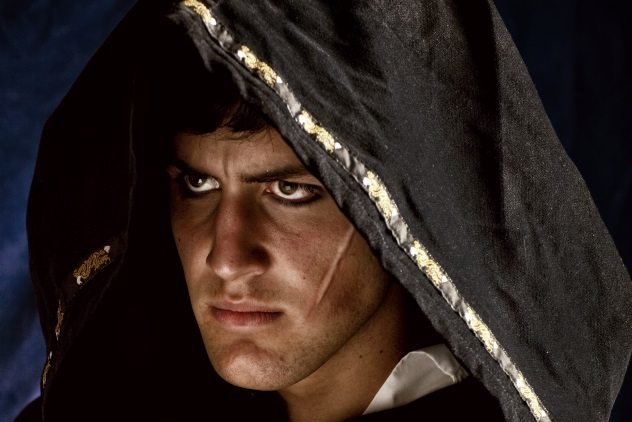 Organizations named “mystery cults” by historians were prevalent in ancient Greece and Rome. They had secret services, initiations, ceremonies, and doctrines which differentiated them from each other. Each cult had their own specifications for diet, burial, and daily life, and each worshiped their own god or goddess, believing that by dedicating their lives to one entity, they were likely to achieve favor with that god or goddess and perhaps ascend to a glorious afterlife.

The cult of Mithras was popular in Rome and celebrated militarism and masculinity as an all male-cult.[8] Whatever their beliefs, the cults are fascinating to historians and pretty creepy to the modern person.

2 A Spartan Newborn Could Kill You 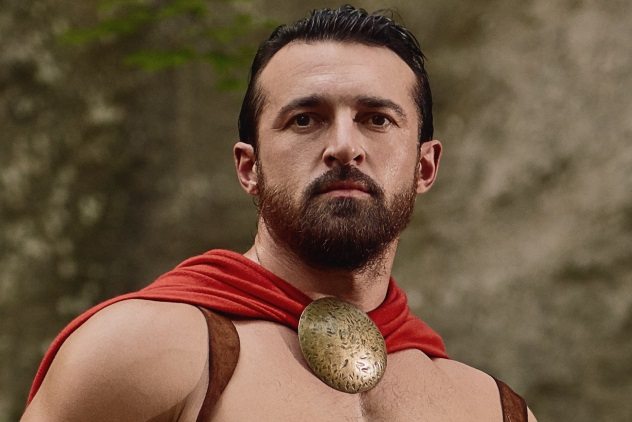 Beginning at childbirth, Spartan citizens were trained for barbarism. To wage war was the ultimate purpose of every Spartan life, and they were all well-equipped to fulfill that purpose. Remarkably, even the diets of Spartan boys were limited. This was not done for the purpose of maintaining a good physique but to actually encourage stealing. If caught stealing food, the punishment would be harsh, not for the crime of stealing but for being caught in the act.

The Spartans preached only efficiency and might, and morality tended to take a back seat. They turned their children into hardened and effective criminals intentionally in order to prepare them for battle. A man had to serve ten years in the military before being granted citizenship and was forced to sneak out of barracks to visit his own wife (and, again, would be punished if caught).[9] Being born in Sparta was to be born a soldier, bound forever to your state and with hardly any personal freedoms. 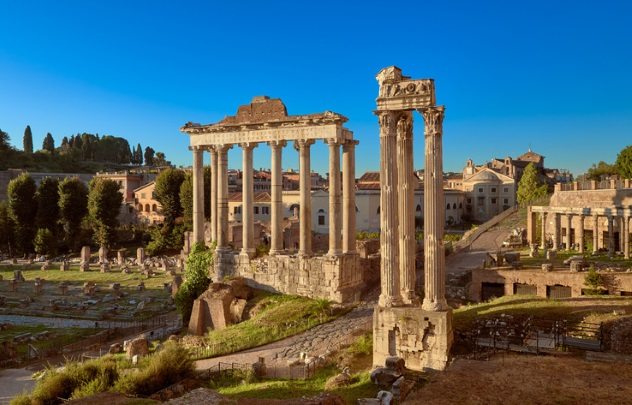 Perhaps the most terrifying thing about ancient Greece and Rome is their fall into corruption. Both were once great and are no longer. For various reasons, they lost control over their empires and ceded their dominance to others. No matter how strong their governments, they eventually became corrupt and fell into ruin. The death of Socrates could allegorically represent the death of the true ideals of Greece and was an omen of their inevitable downfall. Many of the founding ideas of Greek and Roman society were truly good (excluding all those in this list) but did not last until the end of their empires.

Bribery and self-interest contributed to the collapse of the Roman empire, activities which were not so rampant when the young nation started out. As power increased, truly just government slowly fell away, revealing the corrupt and skeletal remains of the original system.[10] The prevalence of assassinations and shady dealings made the late Roman government a true, real-life dystopia.

I am a poet and aspiring novelist from Rock Hill, South Carolina. I am attending school to major in English with a creative writing concentration as well as Spanish. I love learning unexpected things and telling others about them, and I hope my lists intrigue.

Read more about the unsavory aspects of antiquity on 10 Insane Laws People Had To Live By In Ancient Rome and 10 Truly Disgusting Facts About Ancient Greek Life.