While nothing compares to the pressures of having a real job, life at college is extremely stressful. So it should be no surprise that our parents and grandparents spent much of their university lives blowing off steam and hiding from work.

The need for a pressure valve and the fact that students have far too much free time has meant that British and US universities have evolved numerous customs and rituals over the centuries to help their members remain sane and encourage bonding with their classmates. 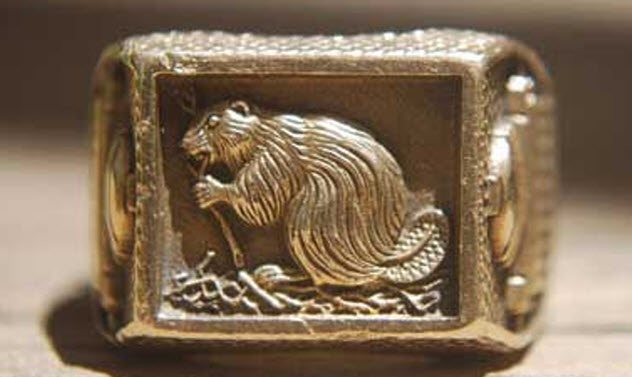 The brainy and technically gifted students of MIT are notorious for carrying out elaborate practical jokes on campus known as “hacks.” Notable hacks included replacing the MIT home page with a message stating that the university had been purchased by The Walt Disney Company in 1998, charging long-distance phone calls to a local radar installation in the 1960s, and causing a large black weather balloon to appear during the middle of a Harvard-Yale football game in 1982.

In particular, students seem to relish the challenge of moving bizarre objects on top of the university’s Great Dome. Notable installations have included a replica of the Wright brothers’ plane, a life-size fiberglass cow, and the Triforce symbol from The Legend of Zelda series.[1]

Another tradition at MIT is the unusual name given to the college’s “Standard Technology Ring.” In 1929, a student committee of sophomores met to agree to the design of their class ring. They decided that it should be engraved with a depiction of the North American beaver to reflect the industrious and practical nature of MIT graduates.

Supposedly, the artistic efforts of the design team looked more like another kind of rodent, hence the name given by generations of alumni to their precious rings—the Brass Rat. 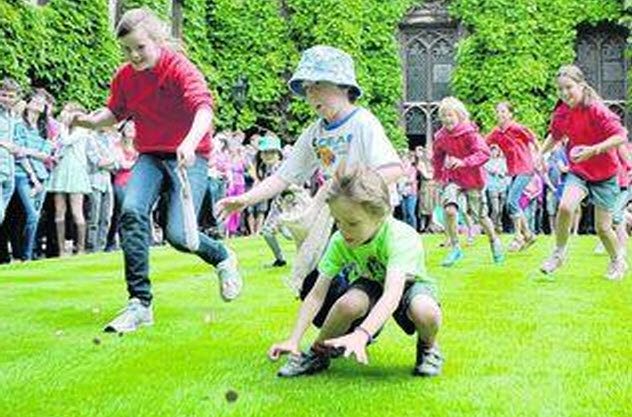 To celebrate Ascension Day, the date on which Christians believe that Jesus ascended to Heaven, the students of Lincoln gather at the top of their college’s tower to throw pennies at a group of children waiting below in one of the university’s squares, known as “quads.”

This ancient form of charity is said to date back to the 15th century and used to be a much nastier event. Apparently, it was customary for students to warm the pennies before throwing them, and it was thought that any badly burned children would be taught a valuable lesson about the sin of greed.

During the same ceremony, Lincoln students will also be seen “beating the bounds” by marching through the center of Oxford while hitting boundary markers with 2-meter-long (6 ft) wooden sticks to mark out the traditional parish boundaries between St. Mary the Virgin University Church and St. Michael at the North Gate.[2]

It is also traditional that members of Brasenose College are allowed to enter Lincoln College and drink a small glass of ale at lunch on Ascension Day. This specially brewed beer is flavored with bitter-tasting ground ivy to prevent the students of Brasenose College from taking advantage of Lincoln’s hospitality. 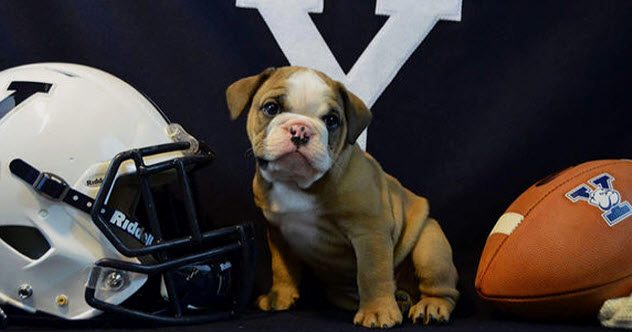 At graduation ceremonies at Yale, students are given a clay pipe and a small bag of tobacco. After a brief smoke, students are expected to smash the pipes, an act which symbolizes the end of their carefree college lives. Another tradition that dates back to 1851 sees students burying a sprig of ivy on the campus, a metaphor for the individual’s enduring connection to Yale. 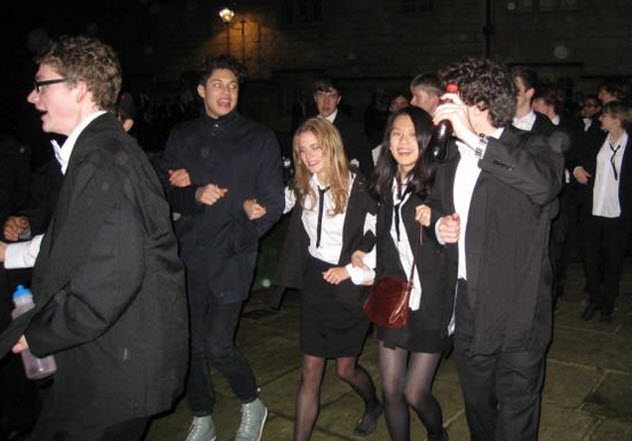 This modern tradition was established in 1971 by undergraduates who wanted to celebrate the end of a three-year experimental period in which the UK had remained on British Summer Time, one hour ahead of Greenwich Mean Time (GMT), all year round. The ceremony sees students put on their sub-fusc (academic dress), grab a glass of port, and parade counterclockwise around the Fellows’ Quad at 2:00 AM.[4]

While the ceremony might appear to be completely pointless, its inventor points out that ever since the ritual has been performed, Britain’s clocks have never failed to make the transition to GMT after summer ends. 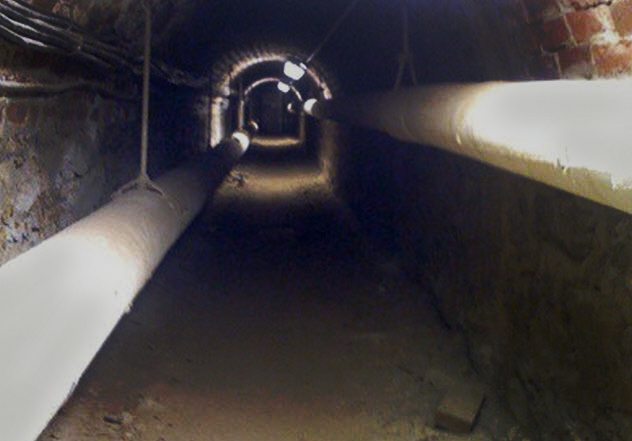 Stanford students have been exploring their college’s impressive collection of subterranean tunnels and pipes since their installation in 1881. Generations of students at “the Farm” have risked the perils of insects, rats, and trespassing laws to drink, play capture the flag, or attempt to find the legendary secret entrance to the Hoover Library.

As many of the tunnels are smeared with dirt, extremely claustrophobic, and covered with red-hot pipes, underground exploration is profoundly discouraged by university staff.[5] 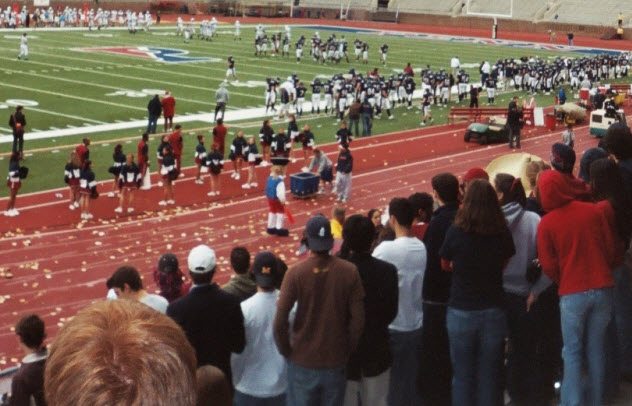 At every home college football game in the US, students can be heard chanting and singing their school songs. At the University of Pennsylvania, the school song, “Drink a Highball,” includes the line, “Here’s a toast to dear old Penn.” At this point, instead of raising a glass, Penn students throw actual slices of toast onto the football field.[6]

Some say that this was inspired by the toast throwing that occurs at some live screenings of The Rocky Horror Picture Show. Others claim that it originated during Prohibition when spectators could no longer take actual liquor into the stadium. Dooley is a biology lab skeleton and the unofficial mascot of Emory University in Atlanta, Georgia. The persona developed when people began writing letters to the university paper under Dooley’s name in 1899.

Dooley is represented on campus by a student who dresses as the skeleton and wears a black cape, black top hat, and white gloves. Every spring, Emory students celebrate their mascot with a week of practical jokes and pranks. The skeleton makes surprise appearances at campus events throughout the year.[7] 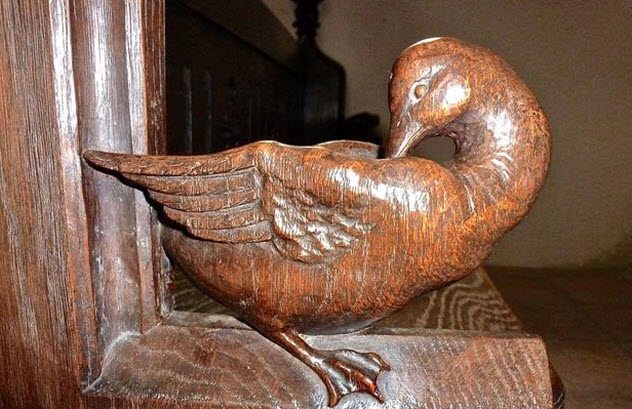 All Souls is Oxford’s most elite college. It is closed to undergraduates, and its fellows are admitted only after a famously rigorous application process. This does not stop its members from engaging in one of the strangest university traditions of all.

Once every 100 years, members of the college, equipped with flaming torches, form a procession led by a person holding a staff with a wooden duck tied to it. This strange event is said to commemorate an incident in 1437 when a giant duck supposedly flew out of the college’s foundations. The next ceremony is due to take place in 2101.[8] 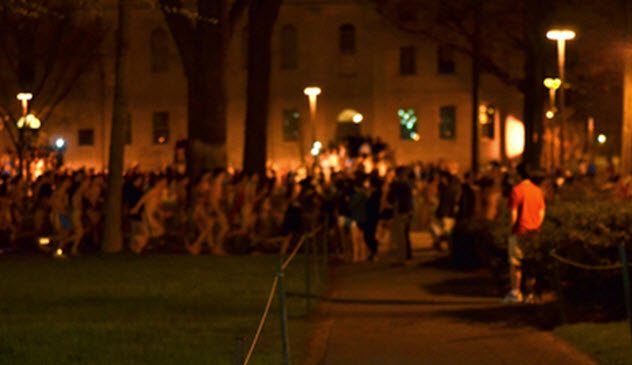 The “Primal Scream” is a phenomenon that occurs at Harvard. At the conclusion of the exam period, students congregate at the north end of the Old Yard to scream just before midnight. This unofficial ceremony has been followed by outbreaks of streaking. However, this aspect of the ritual appears to date from the 1990s as opposed to the early 1700s as is sometimes claimed.[9]

Streaking is a time-honored tradition at a number of US universities. In 1804, George William Crump became the first American college student to be arrested for streaking at what is now Washington and Lee University. This youthful indiscretion did not prevent Crump from serving as a US Congressman or becoming the US ambassador to Chile. 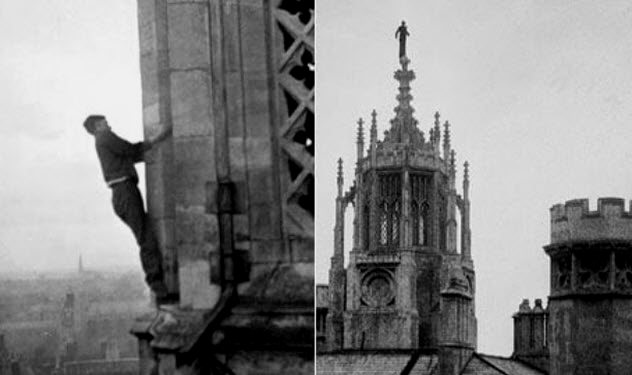 Night climbing is the sport of secretly scaling the college and public buildings in Cambridge. It began in the late 1800s and was immortalized in Noel Howard Symington’s The Night Climbers of Cambridge, which was published in 1937 under the pseudonym “Whipplesnaith.”

Though some evidence exists of the sport being practiced at Oxford in the 1920s, Cambridge students take pride in the fact that their peculiar form of urban mountaineering has never been common in “the other place.” After a period in which the tradition seemed to be waning, the 1960s and 1970s saw a revival and a number of books published that informed climbers of the ways of completing more modern routes.[10]

The chapel of King’s College, Cambridge, has been a particular target for climbers even though it is 29 meters (94 ft) high. In recent years, traffic cones, toilet seats, and Santa hats have been removed from the building at great expense to the college.

James McCall is a London-based gentleman and scholar.