Ring-tailed bandit, masked bandit, night raider, dumpster panda, guardian of the galaxy, or whatever you choose to call them, raccoons can be quite the nuisance. The Centers for Disease Control and Prevention considers the raccoon a major carrier of the rabies virus in the United States, second only to bats.[1] Raccoons, which can attack if approached, can also transmit conditions like Leptospirosis and roundworms. The raccoon population is also growing at an alarming pace, having experienced an “astonishing” surge over the last eight decades. Add to this that raccoons are known to tip over garbage and devour the content, and it becomes understandable why so many people dislike the animal.

Raccoons, however, can also be downright hilarious. Their humanlike hands, rambunctious nature, and ability to fit into tight spaces have the potential to result in some very humorous situations. As a result, this article will review ten of the funniest events that have occurred involving raccoons.

10 The Raccoon That Got Mistaken For A Tiger 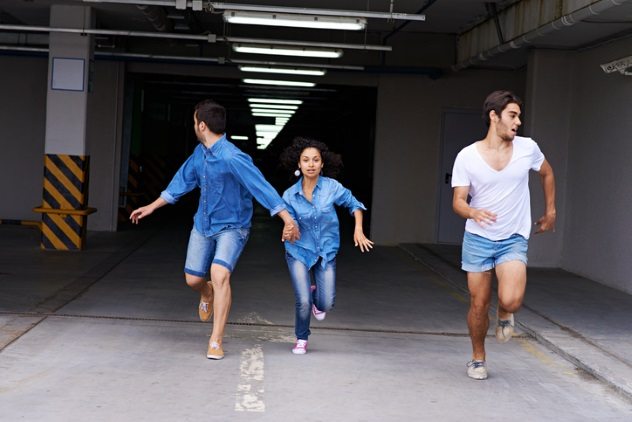 Jonathan Lethem’s 2009 novel Chronic City features a tiger roaming around the streets of New York City, damaging buildings and subway stops. In April 2018, it seemed like this was happening in real life. The New York Police Department (NYPD) received reports of a tiger roaming near 166th street and St. Nicholas Avenue in Harlem.[2]

This warning triggered an uproar on social media and even prompted local reporters to advise people to temporarily stay off the streets for fear that they might be mauled by a tiger. Some people were even awoken in the middle of the night to be informed that a tiger was running loose in the area.

Shortly after the report, a news crew arrived at the scene to find that there was no tiger in the area. Law enforcement reported a few minutes later that while there had been an animal sighting, it was just a raccoon. How anyone mistook a raccoon for a tiger, however, still remains uncertain. The event received such publicity that a spokesman for the NYPD even began answer the phone by saying, “It’s not a tiger; it’s a raccoon.”

9 The Raccoons Addicted To Junk Food 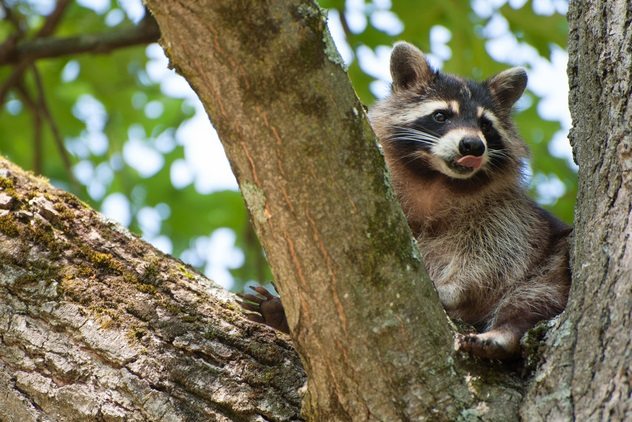 In 2017, the St. Charles Animal Control center in Louisiana was required to relocate a colony of raccoons in Destrehan because the animals had become addicted to junk food, including cereals, cookies, doughnuts, marshmallows, and candy.[3] To keep the raccoons away from other food that was left out for over a dozen feral cats, locals in the area began to leave out this diabetic diet.

The raccoons not only enjoyed the junk food, but they thrived. A spokesman for animal control reported spotting more than 31 raccoons that were between 14 and 18 kilograms (30–40 lb). This is an astounding size, considering that the average adult racoon weighs 6 to 10 kilograms (14–23 lb). These raccoons were reported to have also lost their fear of humans, which led to the animals walking up to people and looking for food right next to people sitting in parked cars.

All of the raccoons were relocated to a safer area, and all of the feral cats were spayed and neutered.

8 The Raccoons Who Held A Street Hostage 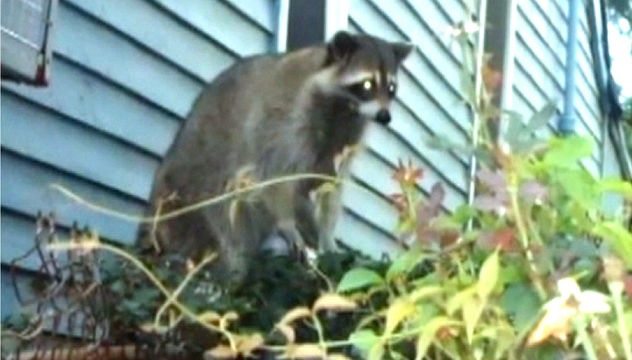 A group of more than a dozen raccoons turned violent in 2016 and ended up keeping the residents of Gravier Street in New Orleans hostage.[4]

Residing in a home that had been vacant for over a decade, the raccoons chased numerous residents in the area across porches and yards. At least one person was forced to make his backyard off-limits to humans, fearing for the safety of his grandchildren. Fortunately, everyone was capable of escaping these hostile raccoons without being hurt.

The raccoons have been living in the neighborhood since Hurricane Katrina. The street has become an unfortunately popular spot for people to dump garbage, which isn’t helping the matter. Overwhelmed with animal problems in the area, the Society for the Prevention of Cruelty to Animals (SPCA) recommended that locals in the area obtain the services of local Wildlife and Fishery centers, who, in turn, recommended that natives to the area use paid animal control services.

Ultimately, the abandoned house was demolished in an attempt to solve the problem.

7 The Raccoon That Refused To Take A Selfie 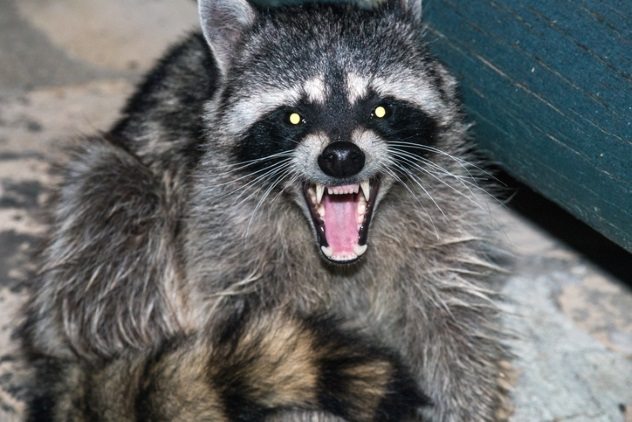 In 2014, a University of Nebraska football player named Jack Gangwish was attacked by a raccoon after the man spotted the animal at the side of the road and tried to cell phone selfie with it. When Gangwish approached the raccoon, the animal responded by biting him in the calf. In a slightly tragic turn of events to an otherwise humorous story, the football player responded by killing the animal with a crescent wrench. The carcass was subsequently tested for rabies.[5]

In response to the randomly aggressive football player, PETA urged the University of Nebraska to punish the man after he escaped any disciplinary action. PETA suggested that all players on the team even take empathy training sessions.

6 The Legacy Of The ‘Nazi Raccoons’ 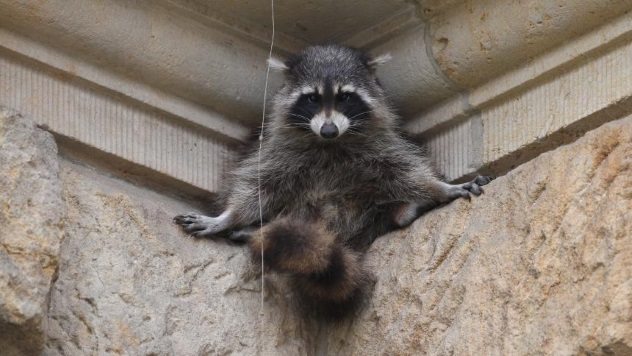 In the 1920s, raccoons were brought into Germany to be bred for their pelts. Now, the country is described as being “overrun” with the animals. Garbage is being raided, and people are being attacked.

In 1934, two pairs of raccoons were intentionally released into the wild for the purpose of “enriching” the local fauna. A long-running historical myth is that infamous Nazi Hermann Goering ordered the raccoons’ release, but this is not accurate.[6] Nevertheless, some tabloids have referred to Germany’s raccoons as “Nazi raccoons.”

Currently, Germany has an estimated raccoon population of more than one million. Raccoons have also spread beyond the country, with some even crossing into the Alps. The animals have not espoused any type of political theory to warrant being called Nazis.

5 The Zombie Raccoons Of Youngstown 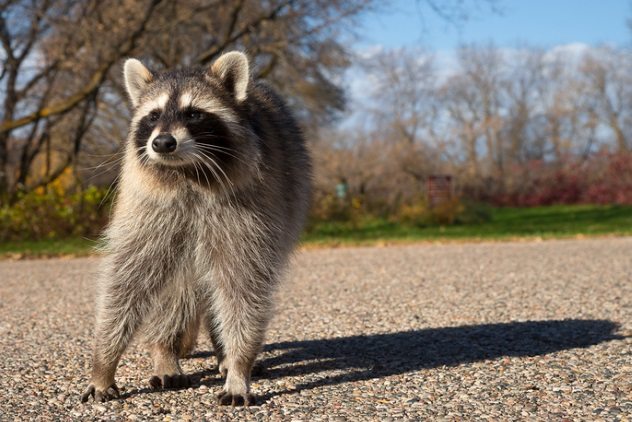 In April 2018, it was reported that zombie-like raccoons have begun to populate Youngstown, located in Eastern Ohio.[7]Law enforcement in the area has received numerous calls from concerned residents about raccoons that would walk on their hind legs, snarl their teeth, and suddenly fall over into a seemingly comatose state. Then, the animals would wake up and go through the same sequence over again. Youngstown residents also reported that the raccoons were not afraid of humans and did not readily scare off. Strangest of all, however, is that nearly all of these zombie raccoon encounters occurred during the daytime.

The Ohio Department of Natural Resources declined to attribute this strange condition to rabies but instead claimed that the raccoons have a disease referred to as distemper. Fortunately, distemper cannot be transmitted to humans, but it can be spread to dogs. Canine distemper is a very harsh condition that attacks an animal’s gastrointestinal, nervous, and respiratory systems, resulting in twitches and even paralysis in severe cases.

4 The Raccoon That Went Viral

The Hillbilly Slide And One Mad Coon Starring Your Favorite Coon and Coonrippy!

Mark “Coonrippy” Brown lives in rural Tennessee, where he taught his pet raccoon, Gunshow, to dance to Aretha Franklin. A video of Gunshow that Brown recorded in 2012 even went viral, racking up more than two million views as well as commentary by The Tonight Show and Good Morning America. A production company also made an offer for a reality show about Brown and his “raccoon whispering” qualities.

The Tennessee Wildlife Resources Agency (TWRA) also responded to the video in 2013 by confiscating Brown’s replacement raccoon, Rebekah, who Brown had made a pet after Gunshow passed away. Brown had taken in Rebekah after the animal’s mother was killed while trying to steal a chicken from a coop.[8]

The TWRA accused Brown of keeping wildlife in captivity, and Rebekah was eventually taken to a nearby wildlife center. In response, a supporter of Brown initiated a social media campaign on Facebook and YouTube to make Tennessee’s governor return Rebekah. Whether Brown got Rebekah back and what ultimately happened to the raccoon remain uncertain.

3 The Dead Raccoon That Received A Balloon 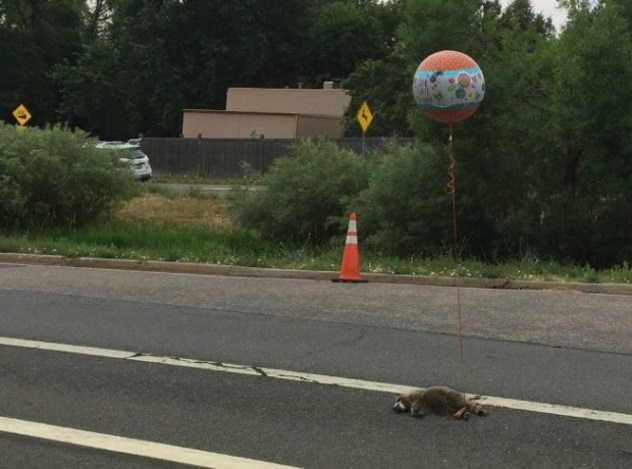 In 2016, an unknown person in the Boulder, Colorado, area attached a “Get well soon!” balloon to the back of a dead raccoon, which had likely been killed by a car.[9]

While many people on social media responded with comments of surprise and criticized Boulder for being lame enough to have a feature news story about a raccoon, a large number of individuals in the area also began to pull to the side of the road and take photographs of the dead animal.

It remained uncertain exactly who tied the balloon to the raccoon, but city workers in the area reported an unknown man driving up to the animal with a balloon. Some people even speculated that the man had killed the raccoon and had brought the balloon out of guilt because a skunk that was located nearby did not receive a balloon.

And so, for several days, a dead raccoon in Boulder remained at the side of the road with a helium-filled balloon fastened around its leg. It should be noted that this was a kinder death than many raccoons receive. Also in 2016, a group of pranksters in New Jersey even went so far as to throw a toilet onto the driveway of a private residence with a dead, frozen raccoon stuffed into the tank.

2 The Raccoon That Stole A Doughnut

In 2015, a raccoon in Toronto became a social media celebrity after craftily descending from the ceiling of a coffee shop to steal a doughnut.[10] After several seconds of deciding which doughnut to lift, the raccoon managed to perform the heist, to the amazement and amusement of onlookers. The daring theft was filmed by a man named Peter Jensen, who posted the video on YouTube. 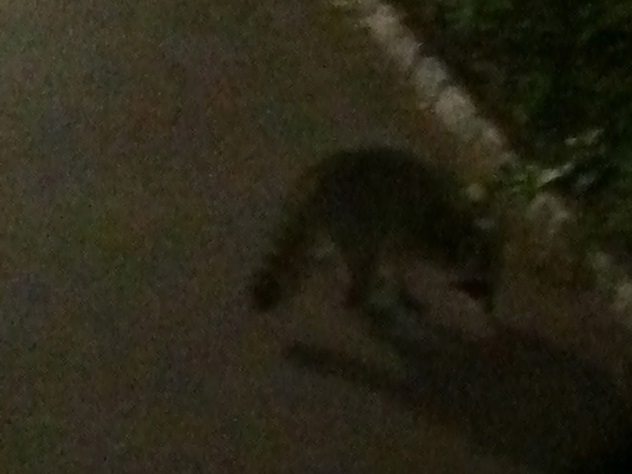 Many people know to be on the lookout for violent muggers while walking through New York City’s Central Park, but raccoons might be a more valid threat. One night in 2013, a Brooklyn musician was cornered by two fearless, thug-like raccoons near The Pond, off 59th Street and Fifth Avenue.[11]

The raccoons proceeded to corner Takara Larson and block her path. Before being attacked, the woman took a cell phone photo of the animals. As one of the raccoons licked the woman’s leg, the other sank its teeth into her other leg.

In an effort to find safety, Larson ran to the nearby Plaza Hotel to obtain bandages and disinfectant from the concierge. From the Plaza, the singer was taken to Roosevelt Hospital and given 15 rounds of rabies shots in her legs, two in her hip, and one more for each shoulder. She had to go back for more shots later on.

Read about more animal silliness on Top 10 Wacky Animal Races From Around The World and 10 Crazy Cases Of Animals Sabotaging Humans.