This week, we’ve decided to shake things up a little. Following a grueling few editions featuring endless battles over the Supreme Court, we’re going to leave off US politics entirely. So there’ll be no mention below of Brett Kavanaugh, Nikki Haley, or Taylor Swift.

Instead, we’ll be taking you on a magical mystery tour through the major stories causing figurative earthquakes in Brazil, South Korea, and China before swinging back to the US for some non-political stuff. Let’s see how this goes . . .

10 China Arrested The Head Of Interpol 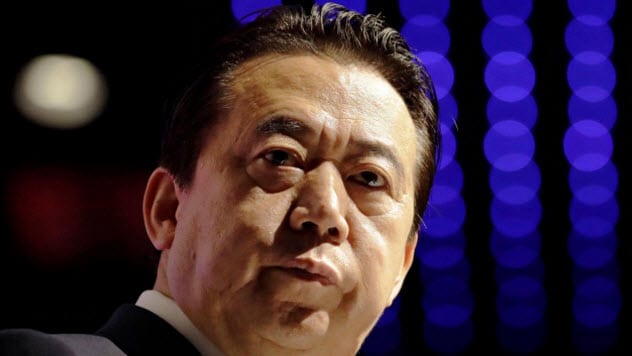 In the tsunami of headlines that accompanied the end of September, one major story managed to slip through this column’s news net. The president of Interpol, Meng Hongwei, vanished while visiting his home country of China. This week, we found out why. Beijing had kidnapped him, arrested him on corruption charges, and forced him to resign as head of Interpol. Um, wow?

Interpol is a pretty serious international organization. And China was all sorts of chuffed that its head guy was one of theirs. So for Meng to wind up rotting in jail, he must have seriously ticked off Xi Jinping. The Economist suggested that Meng may have erred by speaking out against the Communist party line, assuming his powerful position would protect him. It didn’t.

China has been cracking down hard on both dissent and corruption recently. It’s only a couple of months ago that their top actress, Fan Bingbing (X-Men), disappeared for nonpayment of taxes. It looks like Beijing is trying to send out signals to China’s elite that no one is untouchable.[1] 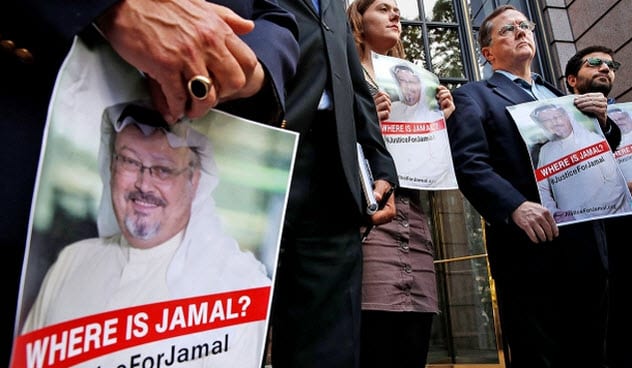 Last week, Washington Post columnist Jamal Khashoggi walked into the Saudi consulate in Istanbul to verify his divorce papers. A native of the Wahhabist Kingdom, he had fled the nation in 2017 after speaking out against the new government. He was never seen again. His fiancee waited outside the consulate for 11 hours.

This weekend, the story went from a mere mystery to big news when Turkey accused Saudi Arabia of murdering Khashoggi. At the moment, the working theory is that a 15-man hit squad waited for him at the consulate, killed him, and dismembered his body to carry it out of the building in pieces.

As of Thursday, Turkey has demanded to search the consulate for evidence of Khashoggi’s murder. Although Riyadh has denied killing the writer, his disappearance fits the picture of a broader crackdown currently being carried out in Saudi Arabia.[2]

Crown Prince Mohammed bin Salman’s moderate reforms have been accompanied by the abduction and execution of all manner of dissenters. If Khashoggi has joined that list, expect the mother of all diplomatic rows. 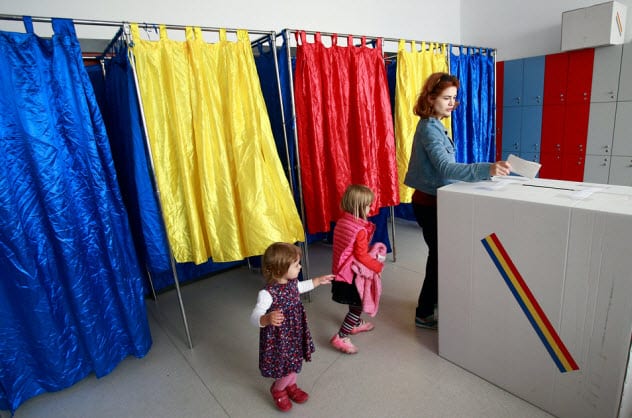 Last month, we reported that Romania had passed a bill allowing a referendum on gay marriage. Unlike most recent referenda, the question wasn’t whether to legalize LGBT partnerships but whether to amend the constitution to ban them outright. Given how socially conservative the Eastern European nation is, it was expected that the referendum would pass. Instead, it was virtually ignored.

The turnout for making the referendum valid was set at a pathetically low 30 percent. Yet not even close to this number of voters participated on Sunday. Turnout was instead an abysmal 20.41 percent, thereby invalidating the result. The estimated cost of this damp squib was around €40 million.

Rights activists and opposition parties had called for a boycott of the vote, which was widely seen as a way for the ruling center-left PSD—which supported constitutionally banning gay marriage—to shore up tanking support in the wake of multiple corruption scandals. Instead, it seems to have left them weaker than ever.[3] 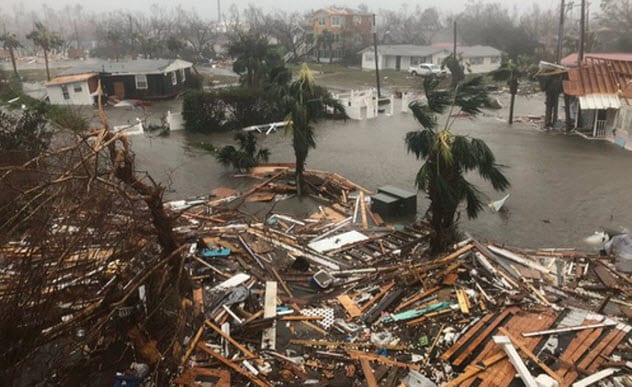 The last time a storm as strong as Hurricane Michael struck the US, it was 1992. George H.W. Bush was still in the White House, Donald Trump was just a New York businessman, and Bill Cosby was still someone you wouldn’t mind being left alone in a room with. When Michael made landfall on Wednesday, it left a trail of destruction not seen for a quarter of a century.

Michael was a storm that surprised everyone. Starting life as a Category 2, it suddenly surged just before reaching Florida into a Category 4, triggering a mass evacuation warning.

While most people were able to get out of the storm’s way, it still caused destruction on a grand scale. Houses were blown apart like matchstick toys. Towns were flooded out. Things got so bad that emergency services simply couldn’t work in the blasting winds. No other Category 4 has ever hit the Florida Panhandle.[4]

Thankfully, the reported death toll remains low. Only two have died in the US, with another 13 killed as the storm passed over Central America. Hopefully, the death toll won’t get any higher. 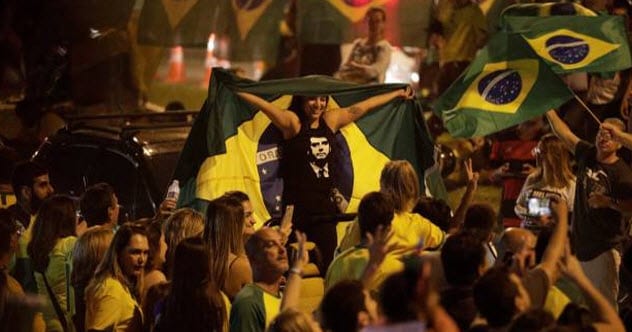 In the end, he didn’t quite make it. Despite polls suggesting an outright win was in the offing, former army captain Jair Bolsonaro just failed to get the magical 50 percent of votes required to avoid a runoff in Brazil’s presidential election on Sunday. Instead, the right-wing candidate pulled down 46 percent, far ahead of his closest rival, leftist Fernando Haddad, who trailed with not quite 29 percent. The two will now go through to a runoff vote in two weeks’ time.[5]

Bolsonaro has styled himself as the Brazilian equivalent of the Philippines’ Rodrigo Duterte. Bolsonaro plans to crack down hard on crime and has previously been outspoken in his vicious attacks on women, gays, and blacks. He’s also on record supporting Brazil’s military dictatorship, which ruled the country from 1964–85. It should be pointed out, though, that he has since reinvented himself as a more mainstream champion of free markets.

Whether Bolsonaro ultimately wins or not (and he probably will), the election signals an ongoing decline in leftist politics in Latin America following multiple corruption scandals over the last decade. 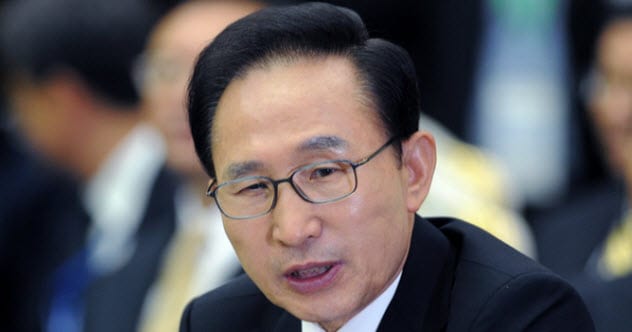 It wasn’t that long ago that this column was reporting on South Korea jailing its last president, Park Geun-hye, for corruption. Well, Park now has good company in her disgrace. Last Friday, a court in Seoul sentenced another former South Korean president, Lee Myung-bak, to 15 years on graft charges. Lee is now the fourth former president of South Korea to receive jail time after leaving office.

For a democracy, South Korea has a terrible track record of impeaching or imprisoning its own leaders. While some, like former coup leader Chun Doo-hwan, definitely deserved it, the jury is still out on others.

Roh Moo-hyun committed suicide in 2009, a year after leaving office, when Lee Myung-bak’s government opened a corruption investigation into him. Since Roh was the mentor of current incumbent, President Moon, some think Lee’s jail term is simply a piece of revenge politicking from a ticked-off Moon.[6]

That’s not to say there isn’t plenty of evidence that many of South Korea’s presidents engaged in some unethical behavior while in office. Maybe Seoul is simply better at bringing its own to justice. 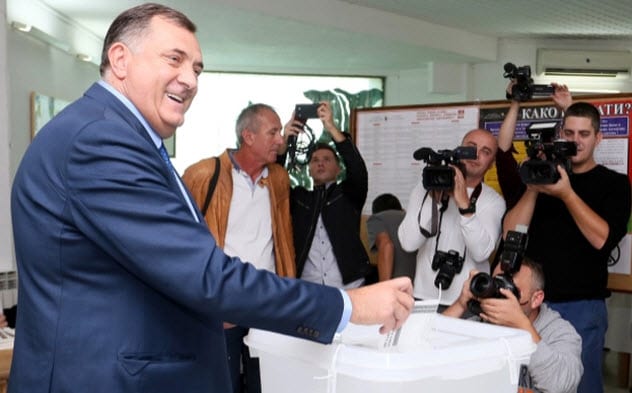 On Sunday, residents of Bosnia and the autonomous ethnic-Serbian enclave Republika Srpska went to the polls to elect new leaders for their insanely complicated power-sharing government. The results were destabilizing, to say the least. The Serbian seat on Bosnia’s tripartite presidency was won by Milorad Dodik, the militant leader who wants to make the Republika Srpska an independent nation and has promised to rule on behalf of, and only for, Serbs.

At the same time, the winner of the Croat seat, Zeljko Komsic, was accused by his rival of relying on Bosniak (Muslim) votes.[7] As a result, many Croats in Bosnia are now campaigning to ethnically segregate their voting districts. To top it all off, separatists won in Republika Srpska, too. There is no part of those last four sentences that couldn’t potentially trigger an ethnic war all on its own.

Ever since the Dayton Accords were signed in 1995, Bosnia has been a tinderbox waiting to reignite. With candidates now openly embracing violent ethnic rhetoric, it could be that the peace accords crumble in the not-too-distant future. We hope not. 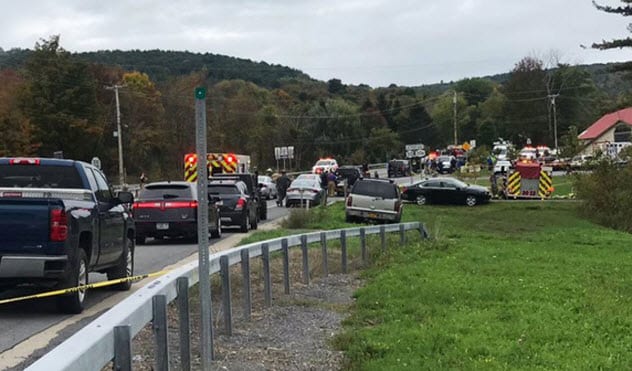 For a crash involving a single occupied car, the death toll from New York State’s limo accident on the weekend was virtually unbelievable. During celebrations for a woman’s 30th birthday, a hired limo shot through a stop sign, mowed down two pedestrians, and smashed into a parked, unoccupied car. The accident killed a staggering 18 people in the limo, including the driver, plus the two pedestrians.

The crash was the worst single transportation disaster in the entire US since 2009, when a plane crashed in Buffalo, New York, killing 50. For a traffic accident this bad, you have to go all the way back to 2005. That was when a bus carrying nursing home residents away from Hurricane Rita’s path burst into flames, leaving more than 20 dead.[8]

At the time of this writing, reports are saying that the limo company’s operator has been arrested. The car failed an inspection in September, and drivers had complained that it was unsafe. By cutting corners, the company may have cost 20 people their lives.

2 Guatemala Finally Made Its Rich And Powerful Accountable 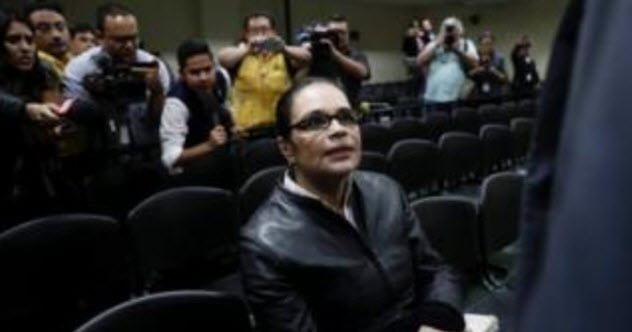 To see the true level of impunity with which Guatemala’s rich and powerful think they operate, you need look no further than the jaw-dropping “magic water” scandal. During her tenure in office, former Vice President Roxana Baldetti negotiated an $18 million deal with an Israeli company to decontaminate Lake Amatitlan using a special solution.

Only it turned out that “special” was a euphemism for “fake.” The liquid poured into the lake was later inspected and revealed to be basically just water with some salt mixed in. Meanwhile, Baldetti was skimming millions off the fund to line her own pockets. With Guatemala’s appalling track record of holding its rich and powerful to account, who could blame her?

This week, that may have all changed. On Tuesday, a court sentenced Baldetti to 15 years and six months in jail for corruption.[9] If her conviction isn’t overturned on appeal, it will mark one of the first times that Guatemala’s elite has had to face serious consequences for their actions.

1 Spain Freed A Doctor Who Helped The Dictatorship Steal Babies 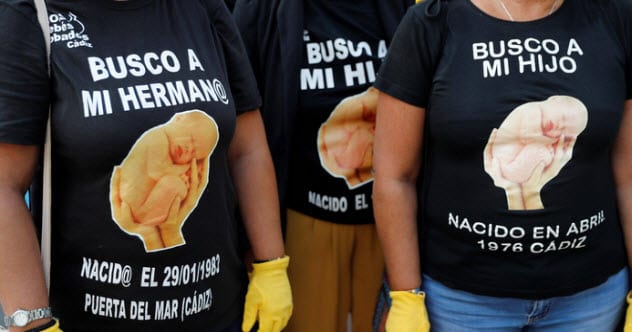 In the pantheon of cartoonishly evil crimes, stealing babies is only slightly below tying scantily clad women to train tracks while twiddling your mustache. Yet that’s exactly what Eduardo Vela did. A doctor in Spain, he spent the years of the Franco dictatorship helping a network of gynecologists, nuns, nurses, and priests snatch newborn babies from left-wing and poor families and sell them to rich, Catholic, and pro-Franco families.[10]

While this was official policy during the dictatorship, Vela carried on even after democracy was restored. He finally shuttered his black market practice in 1987. Three months ago, he was formally brought to trial. On Monday, he was found guilty of kidnapping newborn Ines Madrigal in 1969. Unfortunately, the statute of limitations had expired. Despite having stolen newborn babies, Vela was set free.

Still, his guilty verdict at least represents a step forward in a country still struggling to make sense of its often vicious past. It is estimated that there are at least 2,000 other Spaniards alive today who were stolen from their parents as newborns. Some of these cases may even be within the statute of limitations (25 years after the abducted baby becomes an adult). If so, Vela and his evil ilk may yet see justice.