Everyone knows about the famous pyramids of Egypt. Their vast bulk and precise engineering make them seem like otherworldly artifacts simply dropped onto the desert.

But the pyramid is a common form that ancient—and modern—builders have turned to when creating impressive structures. Here are 10 lesser-known pyramids that deserve just as much attention as the more famous ones at Giza. 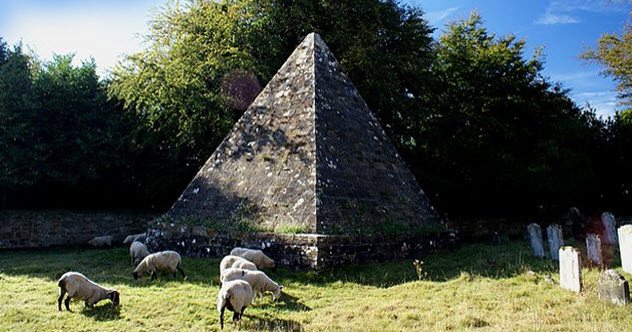 The pyramids of Egypt were tombs and monuments for the pharaohs of Egypt. Most people prefer something more modest for their own resting place, but perhaps you should expect something more from a man known as “Mad Jack.”

In 1777, at age 20, John “Mad Jack” Fuller inherited a large estate in England and slave plantations in Jamaica. With this newfound wealth, he was able to let his eccentricities run free.

When he became a member of parliament, he would ride to London in grand style with heavily armed servants. His temper was formidable and led to him being removed by parliament’s serjeant-at-arms. He was perhaps best known for his follies, however.

Mad Jack liked to build. He constructed on his land a classical temple, an obelisk, a hollow tower, and a spire. His tomb was his masterpiece. While still alive, he designed a pyramid to be built in the churchyard. A story was told that Fuller’s body was propped up at a table set with wine. Broken glass was supposedly put on the floor to catch the Devil if he came for Fuller.[1] 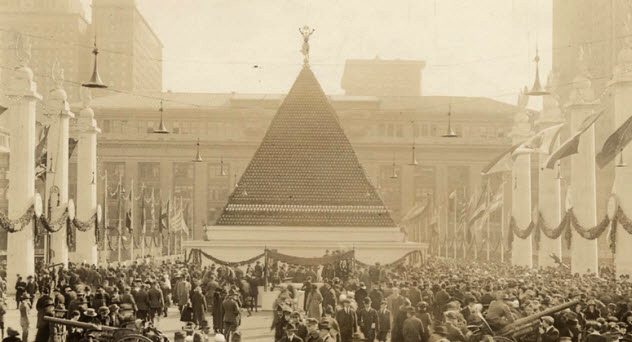 The pickelhaube, the pointed German helmet of World War I soldiers, became synonymous with the “Hun” enemy. It is still used in comedy as shorthand for a vicious military enemy. When World War I ended, a symbol was needed by the victors to show their triumph. In New York, it was decided that a pyramid constructed of captured German helmets would be constructed.

A hollow pyramid was covered with 12,000 pickelhaubes. The pyramid was used as a fundraising device in Victory Way. Visitors were encouraged to donate money to the 5th War Loan to help pay off US debt. To underscore the victory of the Allies, the pyramid was surmounted by a winged figure that was probably supposed to represent Nike, the goddess of victory.[2] 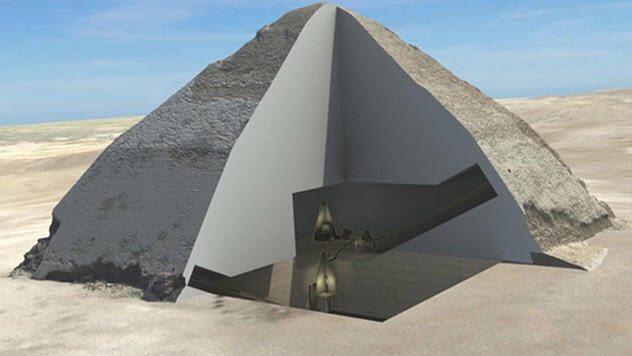 We think of the Egyptian pyramids as eternal in the perfection of their construction. But among the famous pyramids of Egypt, there are some that are less than perfect. The earliest pyramids were not smooth-sided but stepped with layers piled on top of each other.

The pyramid of Sneferu is unusual for a different reason. While most pyramids in Egypt have sides that slope at around 51 degrees, the pyramid of Sneferu has slopes that change halfway up—from 55 to 43 degrees. This is what has led to Sneferu’s pyramid being known to most people as “The Bent Pyramid.”[3]

The pyramid’s construction is a bit of a mystery. It seems to have been done in three phases as the walls actually change their angle three times. Experts had thought that somewhere in the muddled construction there might be a hidden chamber where Sneferu was still buried. Using cosmic rays to probe the internal structure of the pyramid, researchers were not able to locate any significant undiscovered rooms. 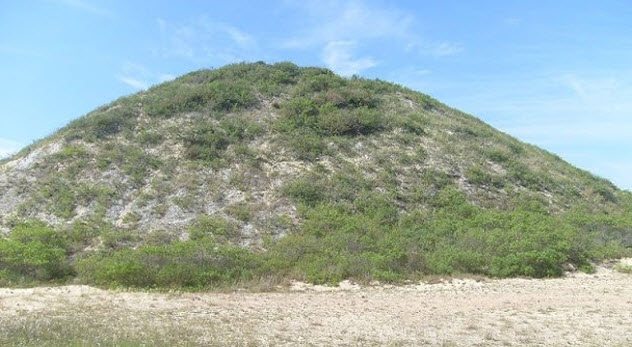 As pyramids have been found in ancient cultures around the world, there are some who believe that the cultures must have been connected in some way. In actual fact, the pyramid is simply one of the easiest ways to build a tall structure.

Despite the outside similarities, there are vast differences between how pyramids in different places were built. The pyramids of Egypt were made of huge stone blocks, but the pyramids of Brazil were made from seashells.

At first, they were mistaken for rubbish sites by scholars as they were made of leftover seashells. Partly because they were not recognized as important sites, fewer than 10 percent of Brazil’s pyramids survive. They were taken apart by people building roads.[4] 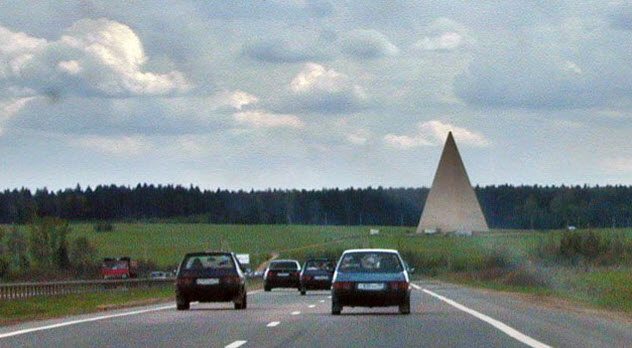 Not all pyramids are ancient sites related to death. Many “alternative” researchers believe that the shapes of pyramids have mysterious powers. To research so-called pyramid power, defense contractor Alexander Golod built a number of pyramids outside Moscow.

Golod’s pyramids are thoroughly modern. They are made of metal and fiberglass. Over the course of building 20 pyramids, Golod has been able to research the powers of the pyramid.

So far, he has discovered: Pyramids boost a person’s immune system, seeds placed in a pyramid produce more crops, pyramids repair the ozone layer, and they cure impotence. Mainstream researchers have not reproduced these findings.[5]

Golod’s largest pyramid was over 45 meters (150 ft) tall and weighed 55 tons. Despite all the pyramid’s mighty powers, it was powerless to save itself when a storm hit Moscow in 2017. The storm destroyed the pyramid. 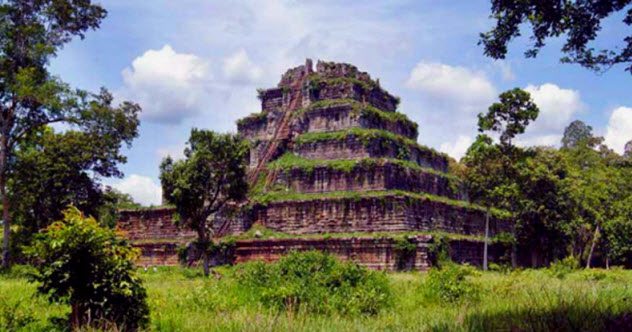 In the jungles of Cambodia lies the ancient city of Koh Ker. The city was once the capital of the Khmer Empire, after the more famous Angkor. While Angkor attracts many tourists, Koh Ker is less popular.

This may be because much of Koh Ker is still hidden in densely wooded areas and there are still mines left over from the conflicts that struck Cambodia in the 20th century. Those who do make it to Koh Ker can see the pyramid there.

The pyramid is built without any mortar or concrete between the blocks, and the whole structure is held together by its own weight. As the stairs of the pyramid are in ruins, anyone who wants to reach the top must use the wooden steps that have recently been added.

It is thought that there may be a hidden entrance to the pyramid underground. Until this is discovered, visitors will have to make do with viewing the carvings on the outside of the pyramid.[6] 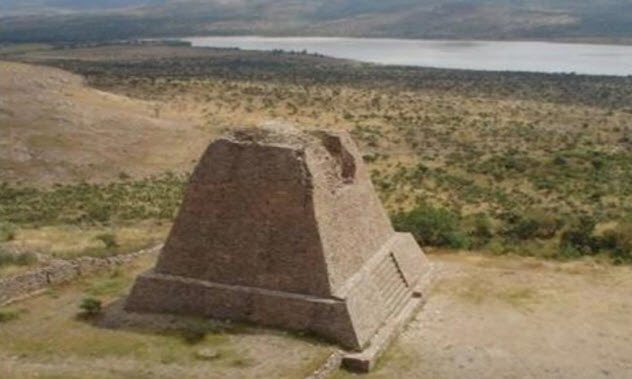 La Quemada is an archaeological site in Mexico with a somewhat mysterious past. Experts cannot agree on who the people were, who built it, or why. The site is made up of various structures set into a hill. Among these are a number of pyramids.

Most pyramid structures found in Mesoamerica are huge and hill-shaped. They use a core of earth that is covered in stone. In contrast, the pyramids of La Quemada are steep-sided and solidly built.

On the top of the Votive Pyramid, reached by wooden steps, was a small temple where offerings to the gods were deposited. Another pyramid, the Sacrificial Pyramid, is thought to be where human sacrifices were made before the victims were thrown down the stairs.[7]

Recently discovered bones have provided evidence that the people of La Quemada may have eaten the bodies of their enemies. The cut marks and burning found on some of the bones are characteristic of cannibalism. Also found were skulls with holes in them, which could have been used to display the heads, possibly on the pyramids. 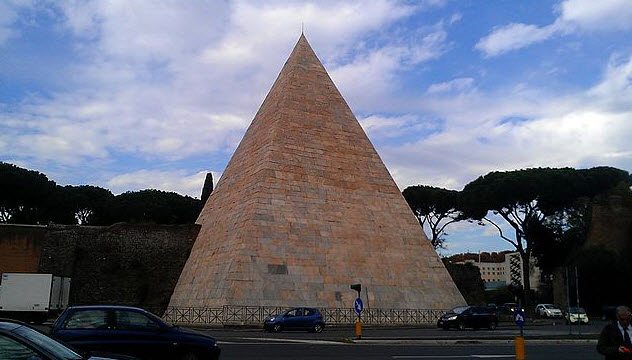 The pyramids of Egypt were already thousands of years old by the time that the Roman Empire arose. It seems that at least one Roman who visited Egypt was so struck by their pyramids that he simply had to have one of his own.

Built between 18 and 12 BC, the pyramid of Gaius Cestius seems like an odd addition to Rome. In fact, there was once a larger pyramid in Rome but that one was dismantled in the 16th century for building materials. The pyramid of Cestius probably survived because it was later incorporated into the defensive walls of the city.

Cestius’s pyramid, which was his tomb, has much steeper sides than the Egyptian pyramids. It is possible that Roman engineers felt they could improve on their Egyptian models by using Roman concrete. Little is known about the Cestius who built the pyramid, but his tomb has become a must-see for visitors to Rome over the centuries.[8] 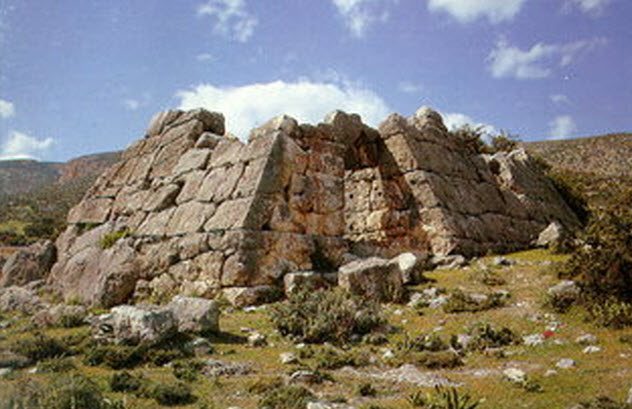 In the second century AD, the ancient Greek writer Pausanias wrote a description of the sites that people might want to visit in Greece. He says, “On the way from Argos to Epidauria, there is on the right a building made very like a pyramid, and on it in relief are wrought shields of the Argive shape.” While there is no trace of this pyramid, there are others in Greece that do survive.

At Hellinikon, there are the ruins of a small pyramid made of stone. In the past, historians thought that this pyramid was a tomb of the sort that Pausanias described. However, modern archaeology has proved that it had a very different use.

Despite its odd construction, the pyramid is actually a defensive site. The pyramid would have housed guards who watched the road that ran outside it.[9] 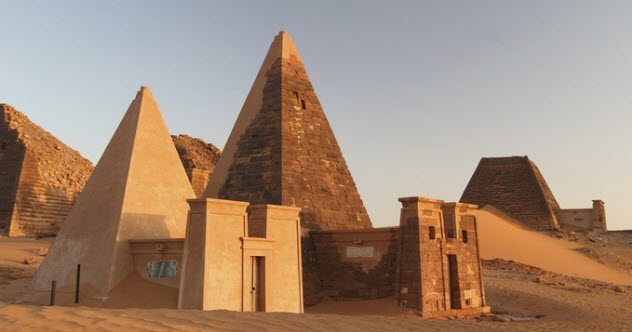 If you think of a country with pyramids, then chances are you immediately think of Egypt. In fact, there is a country which has twice as many pyramids as Egypt and it is right next door.

Sudan is home to ancient Nubian pyramids. The ancient Egyptian kingdom once extended far into the south, where modern Sudan is today. It is thought that the Nubians who lived there built their pyramids in emulation of their Egyptian neighbors.

Over the years, the pyramids of Sudan suffered from people raiding them for building materials, but they are now protected as a UNESCO World Heritage Site.[10] They are also becoming the focus of a tourist industry in Sudan for those who want to avoid the swarms of visitors around the pyramids of Giza.

Read more fascinating stories about pyramids on 10 Greatest Alternative Pyramids From Around The World and 10 Facts About The Pyramids That Could Prove Advanced Ancient Technology.