The Spanish flu often gets overshadowed by its more popular counterparts like Ebola and the Black Plague. In many ways, though, it was far deadlier than anything we’ve seen before or since. An estimated one-third of the entire world’s population contracted it, killing at least 50 million people. The doctors of 1918 didn’t even know what it was, as they didn’t quite understand viruses and influenza pandemics back then.

Despite being such a world-changing event, the Spanish flu is surprisingly underrepresented in popular world history. While we understand that other important things—like the Russian Revolution and World War I—were also going on around that time, they still don’t compare to what many historians have described as the “greatest medical holocaust in human history.”[1] 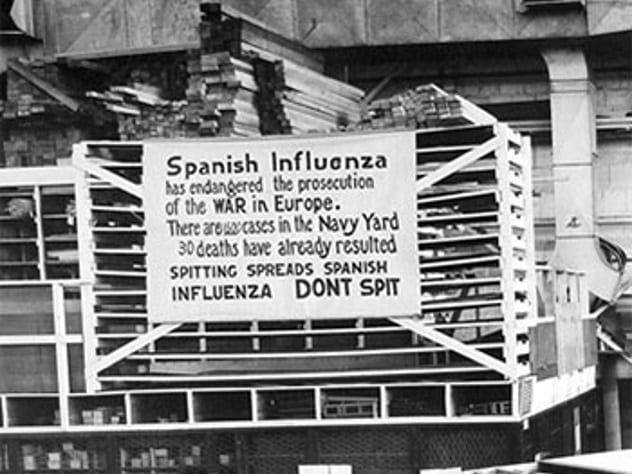 Because it’s called the “Spanish flu,” many of us assume that it originated in Spain. Its name is the primary reason we still blame Spain for something it had nothing to do with. Even though we don’t know where the flu came from, we know for sure that it wasn’t Spain. In fact, the number of cases in Spain was lower than in many other countries.

It’s called Spanish flu because Spain was one of the first (maybe the first) countries to widely report on it. Because of being neutral in World War I (they kind of had their own thing going), their press was freer than other nations’. Countries like Britain, the US, and Russia, all of which were involved in the war, kept the news of the flu restricted to maintain morale. It’s a classic case of blaming the messenger, as people started attributing the flu to Spain, even if it was just honestly reporting on it.[2]

9 We Kind oOf Ignored It at the Time 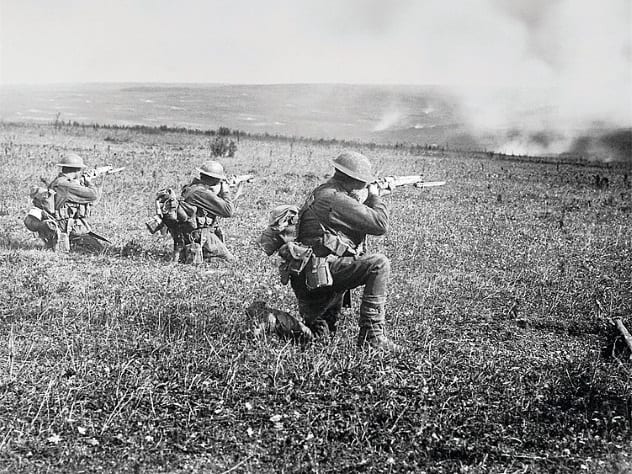 As already mentioned, the Spanish flu was a pandemic unlike any other we had ever seen in our history, and it spread to almost every part of the world in a matter of months. For a medical scare as big as that, you’d think that it would make the front pages of all the leading newspapers of the time.

In reality, though, all we cared about back then was the Great War. At that time, it was the biggest and only global conflict people had seen. It was a catchier way to die than the flu, as “people dead due to disease” wasn’t exactly breaking news back in 1918, but “people dead due to chlorine gas in battle” absolutely was.[3]

8 It Wasn’t a Super Strain of the Flu 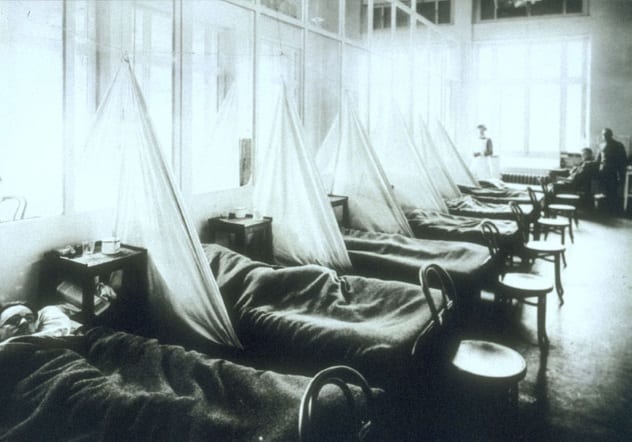 The sheer speed of infection and number of deaths in such a short period of time really doesn’t sound like something a normal flu virus can do. The Spanish flu is always assumed to be some super strain that we just didn’t have a cure for, which came out of nowhere and decimated entire swaths of our population.

Recent research, however, has found that the virus wasn’t more aggressive or dangerous than any previous influenza epidemics.[4] The primary reasons it was so deadly were overcrowding and poor hygiene due to the war. Many people around the world found themselves in cramped spaces like military barracks and refugee camps because of geopolitical conditions at that time, which allowed the virus to spread around far more easily than it would have otherwise.

7 Resurrection of the Virus 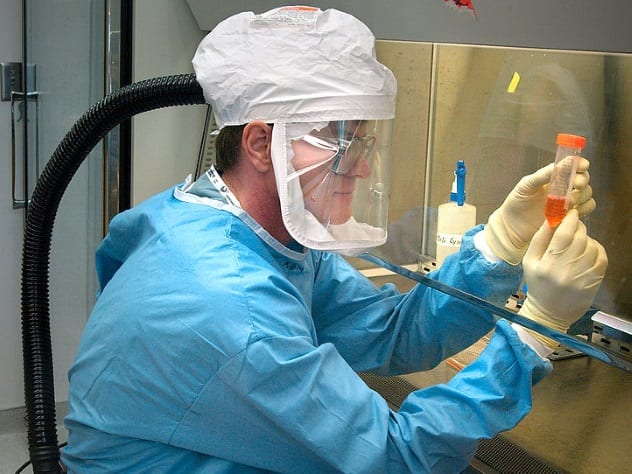 The Spanish flu has been a subject of study ever since it first struck, mostly due to how fast and deadly it was. Despite all of our efforts trying to understand it, though, for the longest time, we had no idea about what caused it or what kind of virus it even was. That was until the 2000s when some scientists isolated it and figured that recreating those conditions in the lab was the best course of action.

In a move that could have gone very, very wrong for humanity, some researchers got samples from frozen bodies of the infected and sort of activated it in the lab to see what it does. They were surprised to find out that the virus was similar to the H5N1 bird flu virus, which had been responsible for some deaths in Asia the previous year.[5]

It’s concerning news. Bird flus, in general, are turning more pathogenic with every subsequent outbreak, and if any ever become really good at infecting humans, the resulting pandemic could be worse than the Spanish flu. 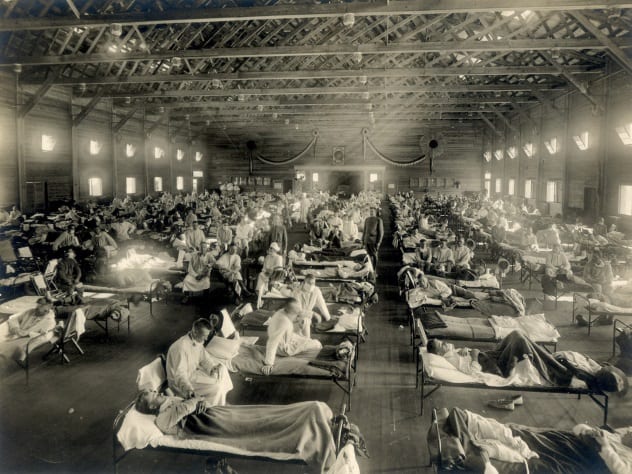 One of the biggest concerns regarding the Spanish flu is that we don’t really know how to battle it, even with our modern medical technology. For one, various pathogens today are rapidly developing immunity against antibiotics and other medicines, largely owing to our overwhelming reliance on such medicines to cure even simple ailments.

More importantly, influenza viruses in themselves aren’t the problem; it’s the other medical complications that come with them that we should really be worried about. Studies have found that the majority of deaths during the Spanish flu were actually due to bacterial pneumonia, which took hold immediately after the virus. Once the flu had successfully weakened the immune systems of those affected, their bodies were fertile grounds for the bacteria.[6]

5 Why It Affected Healthy Young Adults 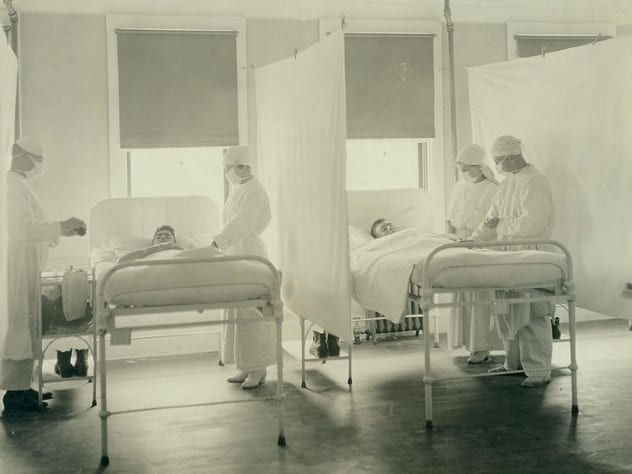 One very peculiar aspect of the whole thing was the fact that the Spanish flu mostly affected healthy, young adults, which was also the demographic most actively participating in the war. (It’s probably not a coincidence.) It was one of the most perplexing parts of it all, as it flew against everything we thought we knew about flu outbreaks or disease in general. Young adults should be much better equipped to fight off disease than other groups, like the elderly, though that clearly wasn’t the case this time. So, what gives?

According to recent research, it has a perfectly plausible explanation. People born between 1880 and 1900—the most-affected demographic—never developed immunity toward the right type of flu viruses. The flu that was most prominent during their childhoods was distinctly different from the Spanish flu. Those born earlier in the 19th century had been exposed to flu viruses more like the Spanish flu and thus had better immunity.[7] 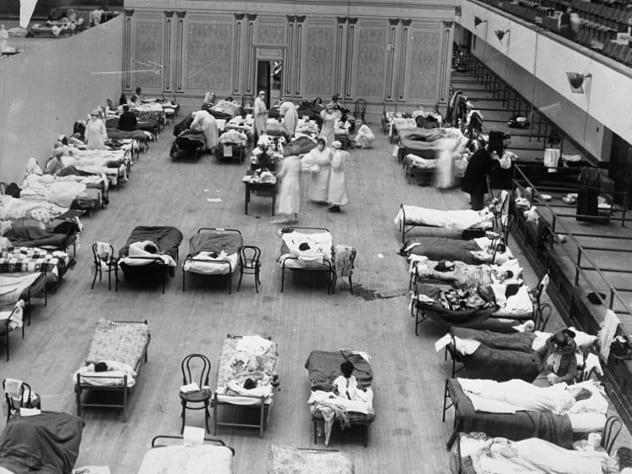 There’s no doubt that the Spanish flu was one of the deadliest events in human history. It was a humbling experience, and no one could have stopped it, though it’d be a bit unfair to say that we weren’t at fault at all.

According to some scientists, many of the early deaths when the flu broke out may have been due to aspirin. You see, back then, we had little idea of what a normal dosage of aspirin should be. We were using it like water, just giving it to patients in the hope that they’d get better, as we didn’t have any better ideas. The scientists hypothesized that “a significant proportion” of those deaths happened due to salicylate poisoning, as we hadn’t yet figured out the upper limit to how much aspirin people can safely consume.[8] 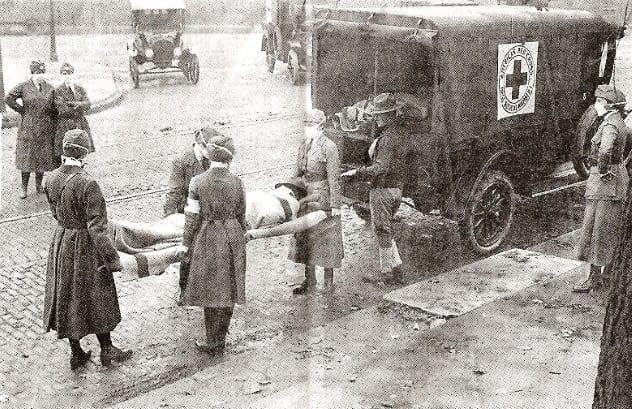 One part that’s left out of all the Spanish flu stories is the horror of it all. Imagine going out to buy groceries and seeing rotting corpses and severely sick people on the side of the road before you even make it to the store. Of course, that’s if you were lucky enough not to get infected yourself, as the chances of that were quite high, too.

One particularly horrifying aspect was what to do with all the dead. The number of deaths in the U.S. was so high that it wasn’t always possible to build coffins for everyone, so the dead were directly buried in the ground. This was referred to as “planting.”

If that wasn’t bad enough, many buildings also served as temporary morgues to store the dead. In one particularly creepy case, bodies were displayed in the windows of the high school in West Pittston, Pennsylvania, so that loved ones could pay their respects from a safe distance.[9] (The school had already been closed to prevent the spread of the disease.)


2 It May Have Originated in China 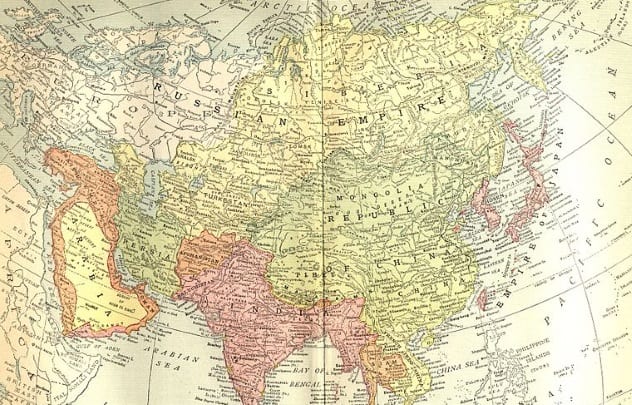 Apart from being an unprecedented medical emergency, the Spanish flu was also quite mysterious. The biggest question was where it came from in the first place. (We’ve already established that it wasn’t Spain.) Knowing where it came from is crucial to identifying the conditions that led to such a severe outbreak and making sure it doesn’t happen again. While this is a question we may never be able to decisively answer due to a lack of medical records from the time, some historians think the Spanish flu may have come from China.

According to Mark Humphries from the Memorial University of Newfoundland, the virus was carried to Europe with some 96,000 Chinese laborers hired to work with the British and French forces. While he admits that we’d need more samples of the virus to truly confirm its origins, other historians find this hypothesis plausible. China had a lower number of casualties from the flu, which suggests that their population had prior immunity to it.[10]

1 One Of The Biggest Threats To Human Life 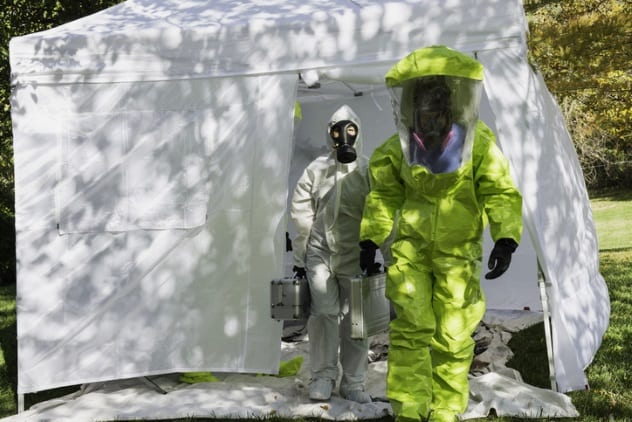 When we think about threats to life on Earth, we always think of stuff like nuclear war or asteroids. That’s probably because those events sound a lot more destructive and deadly than a mere disease, not to mention the medical care of today being a lot more evolved than before.

Unfortunately, as recent outbreaks like H5N1 and Ebola have shown, a rapidly spreading pandemic is still on top of the list of things with the ability to wipe out human civilization. Sure, our quarantine methods and medicines are quite capable of dealing with such threats, though that’s only because we haven’t yet encountered anything like the Spanish flu since 1918. The same flu today would spread much faster due to the world being much more connected than back then. The virus could also be much more resistant to our medicines.

By some estimates, a virus with comparable pathogenicity to the Spanish flu would kill more than 100 million people today, and there’s little we’d be able to do to contain it.[11] We’re not saying that we should all start panicking, but world governments would do well to focus a bit more on this threat.

Yet, eerily, no one really listened as this post was published mere months before the world was hit with another global pandemic—SARS-CoV-2 or COVID-19!

Read more about history’s deadliest diseases on 10 Things You Didn’t Know About The Plague and 10 Frightening Facts About Ebola.