Every ancient bone has a story. Most paint the world’s past with skeletons left by violence and disease. Their stories are not without merit. But it is the rare and the unexpected that really close the millennia gap.

They allow glimpses of unknown behaviors and personal tragedies while the more bizarre individuals break records or excite the paranormal fringe to no end. Sometimes, even an artifact related to ancient remains can challenge the accepted history of a famous figure.

10 Girl From Dawn Of Civilization 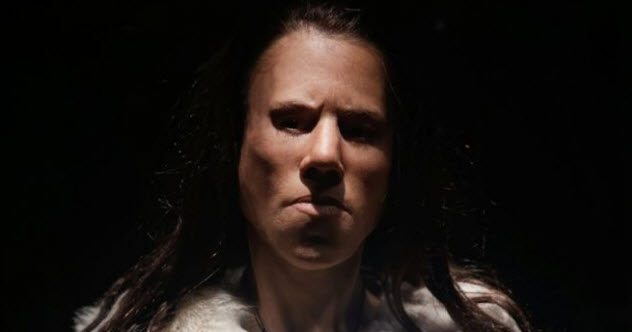 Theopetra Cave in central Greece is known for ancient artifacts from several different eras. In 1993, the remains of a young girl were found within. It was determined that she lived around 7000 BC, the Mesolithic period, which is often viewed as the dawn of civilization.

She was given the name Avgi (Greek for “Dawn”), and her remains gave an unhealthy look at somebody who lived 9,000 years ago. Avgi, who was 15–18 when she died, suffered physically during her short life. She had anemia, malnutrition, and likely scurvy.

Her skeleton worsened the picture. Joint problems, especially in the hips, were serious enough to have impeded movement. Avgi also had a noticeably protruding jaw, something researchers believe may have been caused by chewing on hides to make leather.[1]

In 2018, her face was reconstructed for the Acropolis Museum. In a creative move, she was given an angry expression because in the words of one expert, “It’s not possible for her not to be angry during such an era.” 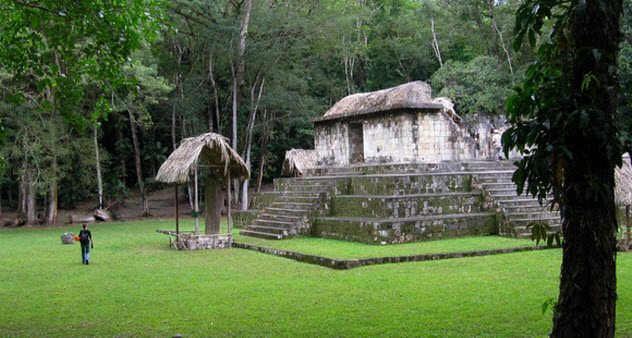 In 2018, the Smithsonian Institute revealed that they had found the first evidence of controlled dog breeding by the Maya. It all came down to teeth and corn.

A few years earlier, researchers had collected animal remains at Ceibal in Guatemala. Ceibal was once among the Maya’s longest-occupied cities and oldest ceremonial locations. Bones at the site included turkeys, dogs, big cats, and deer from 700–350 BC.

To see if the animals were raised on a domestic diet or foraged from the wild, researchers examined their teeth. Dental strontium, in particular, can leave a signature that shows where an animal came from based on its diet.

All of the dogs, two turkeys, and at least one big cat (a puma or jaguar) were raised on a corn-based diet. The deer showed nothing that indicated that they were also domesticated. However, the possibility of a tame large cat was intriguing.[2]

But the most surprising find was the dental “signature” of some dogs, showing that they were imported from other areas. They had not been born where they died, which most likely happened during ceremonies for which the dogs were bred. 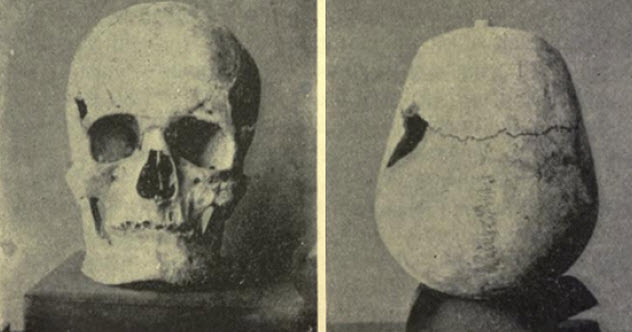 King Sa-Nakht would be a normal guy by today’s standards. But 4,700 years ago, human stature was smaller and this allowed the 187-centimeter-tall (6’2″) pharaoh to look down on his subjects.

Discovered in an elite desert tomb in 1901, the remains dated to 2700–2575 BC, when this enigmatic ruler lived. This was one of the reasons why the bones were attributed to Sa-Nakht. Throughout history, royals were usually taller than the rest, but this pharaoh even outgrew his fellow Egyptian elites.

Sa-Nakht’s abnormal height suggested that he had acromegaly. This disorder triggers an overload of growth hormone which leads to gigantism. In 2017, the man’s skull was examined and compared to other Egyptian royalty and commoners. None met the disorder’s requirements.[3]

The pharaoh’s facial features also hinted at acromegaly. Ancient cases are extremely rare. If Sa-Nakht’s condition can be confirmed, perhaps by future DNA testing, he will be the oldest giant in the world. 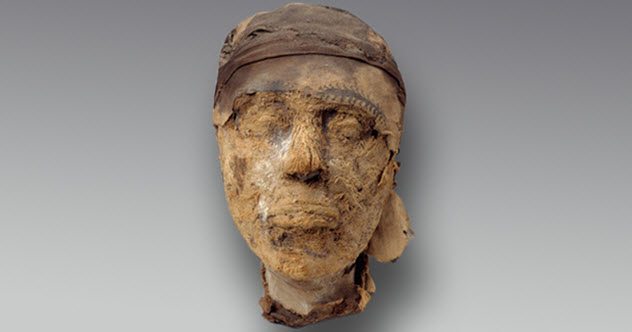 When archaeologists opened a tomb in 1915, they encountered a grisly sight. Perched on top of a coffin was a decapitated head. The tomb belonged to a 4,000-year-old couple, a governor called Djehutynakht and his wife, who had been buried in the Egyptian necropolis of Deir el-Bersha. It became the FBI’s oldest case after Boston’s Museum of Fine Arts contacted the agency.[4]

Nobody knew whose head it was. Despite the agency’s misgivings, they managed to extract genetic material from a tooth in 2016—a first from such an old Egyptian mummy. DNA proved that the head was male and thus belonged to Djehutynakht.

But two more mysteries remain. Somebody expertly performed a coronoidectomy with a precision not thought possible. All the chewing muscles, cheekbones, and jaw hinge were removed without marring the face. Though it’s uncertain, it might have been done during a mummification ritual known as the “Opening of the Mouth Ceremony.”

The DNA also showed that the governor had Eurasian ancestry. It was such a surprise that FBI scientists feared that they would not be believed. However, in 2017, the same thing was found by researchers independent of the agency and with different Egyptian mummies. 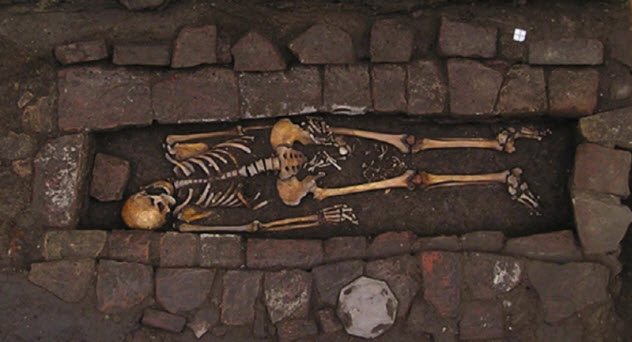 Around 1,300 years ago, a woman died in the Italian town of Imola. When her grave was recently discovered, she was not alone. A baby’s skeleton was also included. The child had not been placed there.

Positioned between the mother’s legs and close to the pelvis, he or she had been born inside the coffin. The mother’s skull hinted at what had gone wrong. A hole, 4.6 millimeters (0.2 in) in diameter, had been drilled into the bone. A slash mark across the skull supported the belief that the woman had undergone trepanation, or primitive brain surgery.

The slash was likely made when her scalp was cut and peeled back to make way for the drilling. Trepanation was often used to relieve high blood pressure. The woman likely developed a hypertensive pregnancy-related disorder such as preeclampsia or eclampsia.

Despite the surgery, she died about a week later and so did the infant. The “birth” was caused by posthumous gases forcing the baby from the womb. Coffin births are extremely rare, but medieval trepanation is even more so. To have both in one case, however, is unique in archaeology.[5] 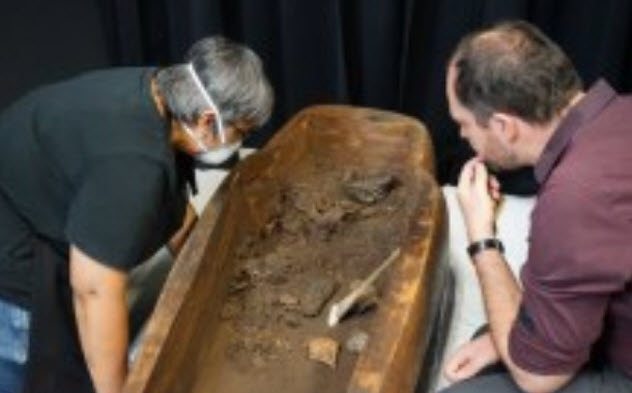 For 150 years, an Egyptian casket was stored at Sydney University. During that time, the notion developed that the coffin was empty, which was perhaps why nobody bothered to look inside.

When researchers finally popped the lid in 2018, they got a dusty surprise. The 2,500-year-old casket harbored what was clearly mummified remains. The person was no dazzler like Tutankhamen. Instead, the body was greatly damaged by bad handling.

But similar to the famous boy king, researchers recovered a lump of black resin that had once filled the skull. Additionally, there were feet wrapped in cloth and a fused sacrum which showed that the mess belonged to an adult.

Hieroglyphics on the casket mentioned a priestess called Mer-Neith-it-es. The box may be hers but not necessarily the body. Antique dealers stuffed any ancient mummy into an available casket just to make a sale.[6]

A lot of research will be required to identify the thirtysomething. Though the remains are badly scattered, researchers believe that cutting-edge technology will one day reveal the truth about this rare find. 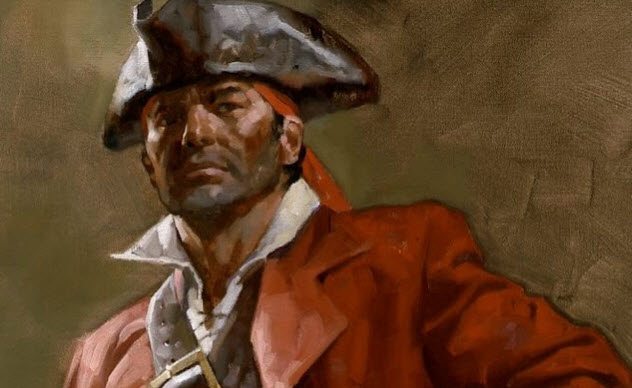 The richest pirate in history was Captain “Black Sam” Bellamy. In 1717, his ship, the Whydah Gally, sank at sea and his crew drowned. Over 100 bodies washed ashore at Cape Cod. There is no account of Bellamy himself being found alive or dead. The crew was buried somewhere in Massachusetts.

In 2018, archaeologists announced that they had found the site, which constitutes America’s biggest pirate graveyard. To prevent looting, the location is being kept secret. Among the finds were burial hills and vaults, 17th-century ceramics, and more than 100 individuals.

The captain’s remains were possibly discovered in the wreck of the Whydah. The ship was located, along with its fabled riches, in 1984. While exploring the wreck off the coast of Cape Cod in 2018, Bellamy’s unique pistol was identified. Right next to it were human bones.

The Whydah pirates are remembered for their democratic society aboard the ship and their captain’s unusual nature. He was a stern but peaceful man, which earned him the nickname “Prince of Pirates.”[7] 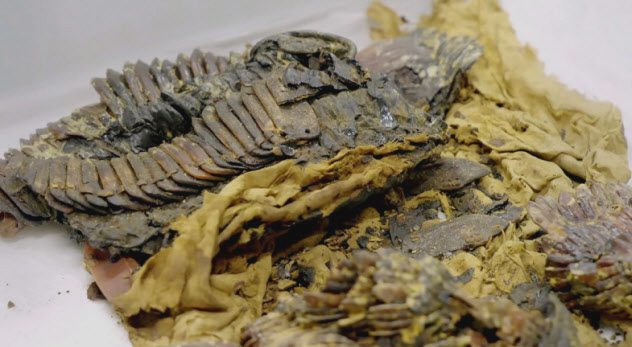 As one of the most famous pharaohs, King Tutankhamen received his fair share of the celebrity circuit. Perhaps more times than it should have happened, the teenage ruler was depicted like several other pharaohs—as an active soldier.

Tutankhamen, who lived around 1343–1323 BC, was frail. Physical obstacles such as his clubfoot and malaria would have proved problematic on the battlefield. However, a recent assessment of his armor revealed a curious detail. It appeared to be used, with wear and tear detected around the edges of the leather scales.

When it was recovered from Tut’s tomb in 1922, a botched attempt at preservation damaged the piece. Researchers feel that the scuffed edges were not caused by that incident but from actual use during ancient times. Additionally, a photo taken before the modern damage showed that the artifact already had a torn seam and stretched ties.

The notion that Tutankhamen was an active warrior is intriguing. But it would be impossible to prove whether the armor was used by him or someone else.[8] 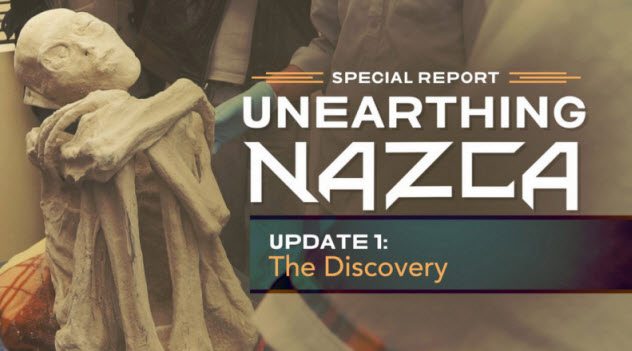 Early in 2018, the more gullible members of the alien fringe fell for a gruesome hoax. Five mummies from Peru were shared on social media and even on some TV channels. Their hands were creepy and inhuman, showing three unnaturally long fingers.

It is not hard to see why some thought that they were ancient aliens. Researchers also believe that they are ancient beings but very much human. They were “discovered” by a prolific tomb robber, who apparently demands money from researchers who show interest in the bodies.

The main research was conducted by a Russian named Konstantin Korotkov. The man’s suggestion that the mummies are extraterrestrial is as dodgy as his affiliation with research centers that have never heard of him.

More credible scientists are horrified that the mummies may be real. Not aliens, but looted body parts sculpted together to shape a couple of ETs. Apart from scientists strongly feeling that some of the feet and hands (although manipulated) are real human remains, one mummy also sits in the classic pose used by the ancient Nazca people to arrange their dead.[9] 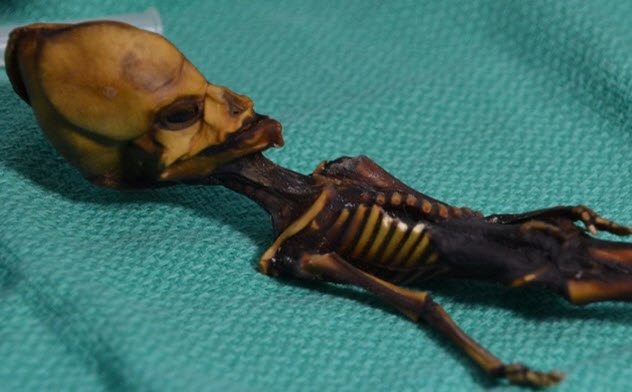 In a case somewhat reversed, a small humanoid body was found in 2003. Its weird looks made many dismiss the creature outright as fake. The skeleton was found buried in a bag behind a church in Chile’s Atacama Desert.

Several features made it appear impossible to be anything other than a hoax or, for the believers, a tiny alien. It was barely 15 centimeters (6 in) tall with a cone-shaped skull and a rather mean expression, 10 pairs of ribs (humans have 12 pairs), and the bone structure of a six-year-old child.

In 2018, a battery of genetic tests revealed something remarkable. The naturally mummified body was human. Moreover, it was a little girl. She had the typical DNA of the region, which was a mix of European and Native American.

Nicknamed “Ata,” the analysis showed that she had a host of genetic mutations that had deformed her bones and caused dwarfism. Ata probably died after birth and is officially the smallest baby ever born. Unique as she is, perhaps the most surprising thing is that Ata’s parents could still be alive. Her skeleton is an estimated 40 years old.[10]

Read more fascinating stories about rare remains on Top 10 Human Remains You Can Visit Around The World and 10 Recently Discovered Ancient Skeletons That Tell Curious Tales.