One of the most baffling mysteries in human history has been trying to explain the incredible feat of engineering that resulted in the Great Pyramids of Egypt. For thousands of years, historians, architects, and scientists have tried to come up with their best explanations for these massive constructions.

To this day, the mystery is still not fully solved. No one truly knows just how it was done. But there have been plenty of explanations given, and we will examine the top 10 most plausible construction theories of the Great Pyramids. 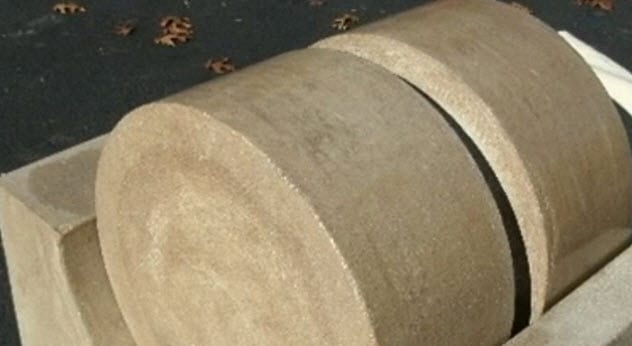 Naturally, the first thought that pops into our minds when we think of constructing a building is the use of cranes to lift and carry heavy pieces of metal or stone. The first pyramids were step pyramids with large flat surfaces on which heavy cranes could stand and operate.

Certainly, ancient cultures were aware of levers and pulley systems, and they likely used something like this to construct the first pyramids. However, cranes have almost no plausibility when it comes to explaining the Great Pyramids of Egypt given such small surfaces on which to stand.

More advanced building techniques are needed to explain how to build the geometric pyramids found at Giza.[1]

9 The Pyramids Were Originally Hills 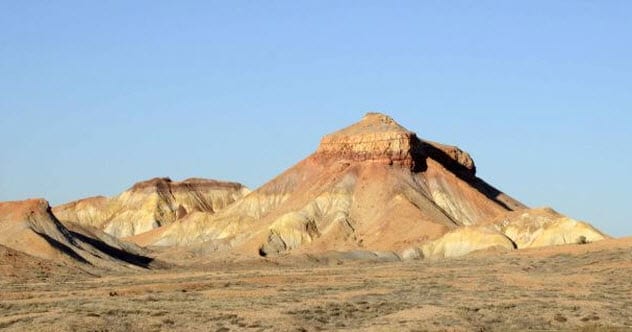 An interesting yet bizarre explanation behind the pyramids is that they began originally as natural mountainous formations, and then the rocks were laid over these hills top-down rather than bottom-up. This idea was first proposed in an 1884 article in The Fort Wayne Journal-Gazette by a conference of scientists.[2]

Perhaps this is what Herodotus meant when he said the pyramids were built “top down.” Hey, at least it’s an imaginative proposal despite being ridiculous and implausible.

One of the most challenging feats involved in building the pyramids seems to be the way in which the Egyptians were able to cut the rocks with such extreme precision so as to stack them with almost no space at all in between. Not even a piece of paper can fit where two stones touch.

How did the Egyptians achieve such tightness and perfection? We can’t even recreate this today with our most powerful diamond-tipped blades. Well, it may surprise you to know that they may have been able to achieve this with basic hand tools and some ingenuity. It’s not that they had better tools then we do now. They were just much better at using what they had.[3]

They achieved this smoothness to the rocks by using two poles of equal height connected with tight rope, under which the rocks were placed. This allowed them to see whether the rocks could just barely slide in and out from under these ropes.

If they found a point at which the rope made obvious contact with the surface of the rock, they could simply mark it using red ocher and then scrape away the high spot using a flint scraper or a sunstone rubber. It is possible to chip away at granite rock, one of the hardest materials on Earth. 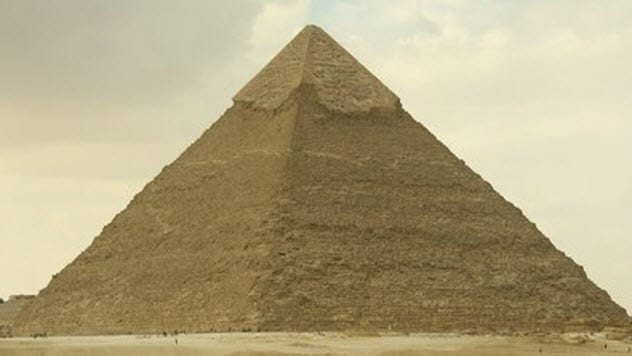 Perhaps an even better and more plausible way to achieve the perfectly smooth surfaces of the rocks was that the stones were made by pouring liquid limestone concrete, which was then encased to easily form a perfect geometric shape. There seems to be some evidence to support this theory.

Under a microscope, Egyptologist Jean-Philippe Lauer detected what appears to be air bubbles on the surface of the stones, signifying that air may have become trapped under liquid concrete. According to the Journal of the American Ceramic Society, it also appears that the elements inside the stones were formed in a process that happened very quickly, which suggests that this is evidence of cement.[4] 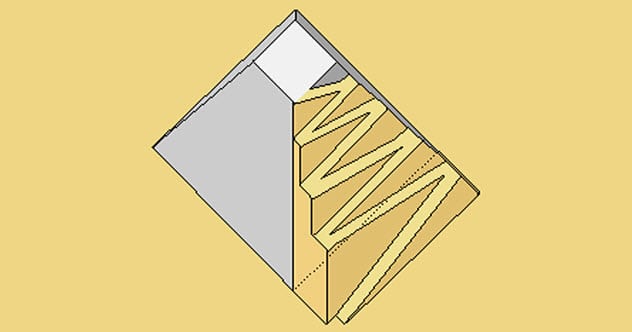 In order for a ramp to make sense, it would have needed to be constructed throughout the process of building the pyramid. Though a zigzagging ramp would require less material than a straight ramp, it is nearly as implausible because it would have required constant adjustment as the pyramid structure was built higher and higher.

A single zigzagging ramp alone would be another mystery. How could this type of ramp make its way up the pyramid? Ramp theories such as this have been widely discredited.[5] 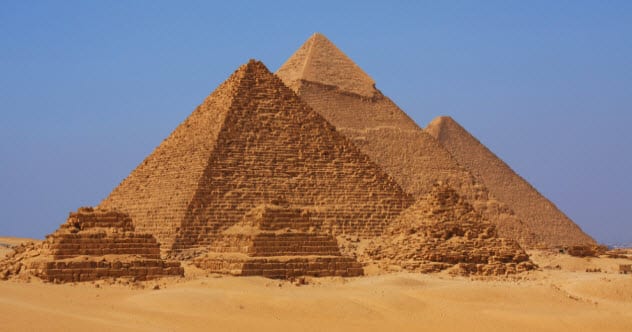 Today, some advocates still believe that the pyramid stones were moved over piles of sand that were made wet so as to much more easily drag the stones without causing friction. This theory would explain the transportation of the stones from quarries hundreds of miles away from the building site as well as how the workers moved the stones upward using some type of ramp.[6]

But would a wet ramp provide enough stability for stones to be elevated upward when some of the stones weighed up to 20 tons each? And what about the men who would pull these stones up a wet ramp? Wouldn’t they have a hard time grounding their feet on this type of surface?

At best, this theory can only explain the transportation of the rocks. As a method of lifting the rocks, it fails. 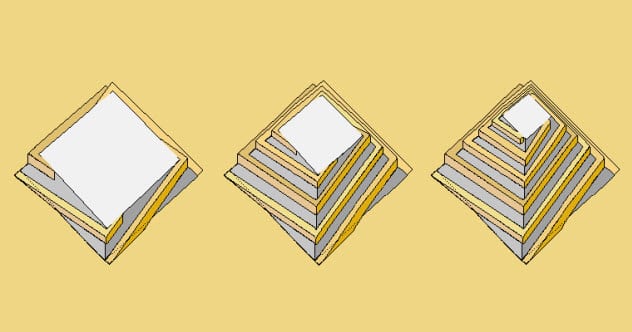 Here’s the first theory on this list that starts to make a bit of sense. When trying to devise a plausible ramp theory, people eventually began to realize that a spiral ramp could be constructed simultaneously with the pyramid.

It would run along the outside of the pyramid and would continually rise upward as the pyramid was built. Proponents of this outer spiral ramp theory include Mark Lehner, an archaeologist with a Yale doctorate.

The main problem in using a spiral ramp is maneuvering the stones around the corners. It’s hard enough hauling huge stones up a ramp, but also having to turn the stones creates another difficulty. This is where the outer spiral ramp theory breaks down, and more plausible methods are required.[7]

Building the Pyramids of Egypt …a detailed step by step guide.

What about constructing a long water causeway underground from a local water source within reasonable distance from the quarry and then using water shafts to float the stones upward? This theory suggests that a water causeway was used to transport the stones and that the stones were cut and shaped in the water.

After a stone was cut to precision, light pieces of flotation material were attached to the stone. That way, it would float upward and its surface would be protected from bumping against other stones.

There is some evidence to suggest that these types of water shafts were used to aid in constructions from other parts of the world. For example, it is believed that canals were used to build Angkor Wat in Cambodia.

However, if such a canal were used to build the Great Pyramid of Giza, where did it go? Why was it torn down?

Allegedly, it took 10 years to build and would have had to be 10 kilometers (6.2 mi) long as that is the distance from the Nile River to the Giza site.[8] Furthermore, even if this theory is true, it still doesn’t explain some other details within the pyramid, such as the quarry blocks used to build the King’s Chamber. 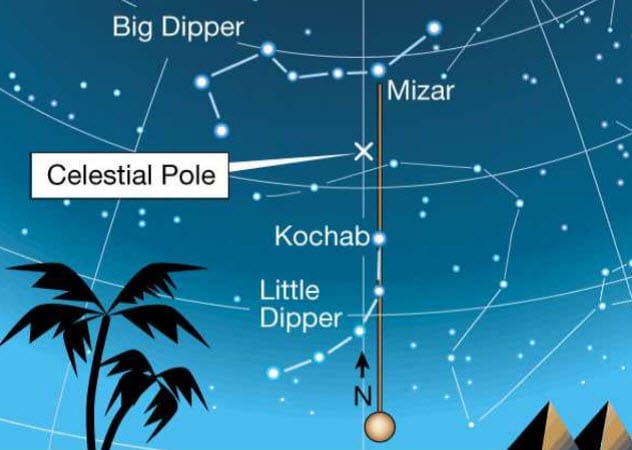 Upon hearing this theory, many will immediately scoff at it. However, extraterrestrial intervention is a completely natural theory. Given everything we know about the pyramids, it may be rational to conclude that ancient cultures could not have built these incredible structures on their own.

Even with all our advanced technology today, we are wholly incapable of constructing pyramids like the ones in Egypt. Therefore, it seems unfathomable that an ancient primitive civilization possessed both the technology and the ingenuity to construct the pyramids with such extreme precision.[9]

Another remarkable mathematical feature of the Great Pyramid is that the perimeter divided by the height is equal to 2π, varying by only a minor amount. A whole slew of other precise mathematical figures surround the pyramids, but most importantly, we must consider the rate at which they were built.

Given 2.3 million stones weighing on average 2.5 tons each, it is estimated that one stone would have been put in place every two minutes. This includes all the time needed to perfectly cut the rocks, have them transported miles across the desert, haul them up the ramp of the pyramid, and then lay them perfectly in place. It’s very hard to believe that primitive human beings did all of this.

In recent times, one man stands apart from all others who have attempted to solve the mystery of how the pyramids were built. He is a French architect named Jean-Pierre Houdin. Since the 1990s, he has devoted all his time to studying the Great Pyramid and has been able to design the most brilliant pyramid construction theory ever conceived.

According to Houdin, the Great Pyramid was constructed with the use of two separate spiral ramps. The first one was an outer spiral ramp ascending about 30 percent of the way up, and the second was an internal spiral ramp through which the heavy stones were dragged the rest of the way to the top.

Houdin calculated that this internal ramp had a slope of 7 degrees. This spiral ramp also included open sections on the corners for the workers to turn the blocks. This is where it is thought that cranes were used.

Thus, the Grand Gallery exists for a practical purpose. Inside are signs that support this theory, such as holes that have been wedged into the rocks. They are believed to have been used to support the pulley system.

Houdin’s theory has a lot going for it. Using digital technology, a team of computer programmers was able to test the idea. They have been able to confirm that Houdin’s blueprints for the pyramid measure up mathematically and that the internal ramp is plausible.

Most astonishing, however, is that they were able find evidence for the actual existence of a ramp using a low-density scan of the pyramid, which revealed a spiral-shaped image. This could very well be the remains of an internal ramp. By far, this theory gives us the most plausible explanation for how the pyramids were built.[10]

Read more intriguing facts and theories about pyramids on 10 Facts About The Pyramids That Could Prove Advanced Ancient Technology and 10 Lesser-Known Pyramids.