Radioactivity is an energy born when atoms break apart. These rays and particles are not flesh friendly. However, as money and curiosity often override ethics, history is filled with radioactive products, health fads, and illegal human experiments.

The zingy particles also cause odd dangers after nuclear explosions and, in a very alarming way, to crematorium workers. Perhaps the most enigmatic are the abandoned, human-free zones caused by contamination. Such areas have unique tales as sad as they are remarkable. 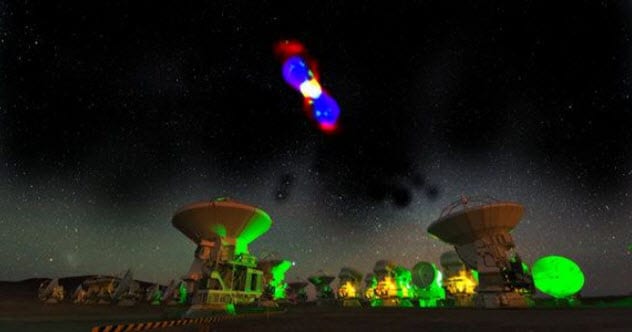 Back in the 17th century, astronomers were treated to a nova. They could see the bright spot with the naked eye and duly marked its location in the Vulpecula constellation. During 2018, scientists realized how special CK Vul really was. In ancient times, two stars collided with epic violence and blended in what is called a “red nova.”

As it cooled down, vast volumes of gas and dust were produced. The dust kept a fantastic secret—the first radioactive molecule to be discovered in space. Technically, it was an isotope of aluminum called 26Al. This was the first molecule of the substance found in space but not the first 26Al.

For years, researchers were aware of two solar masses consisting of the same material. The real mystery was where this radioactive isotope originated in the galaxy. The merger of the two stars could have something to do with it, but it failed to account for the amount found in the nova’s gas.

CK Vul’s gas was another reason to celebrate. The type of molecular gas, known as 26AlF, had its own hazy origins. The same study that found the isotope also identified CK Vul as the first-known object to produce it.[1] 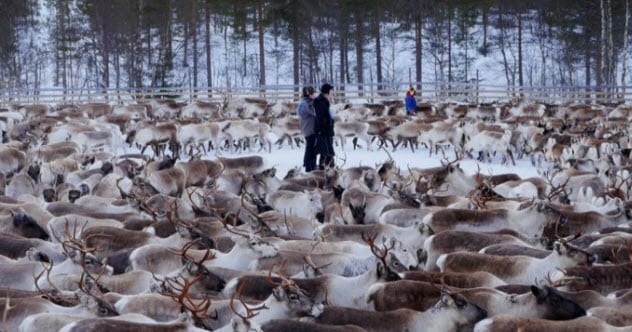 The Sami people are indigenous to the Arctic North. For 9,000 years, they lived closely with reindeer. This lifestyle ended abruptly when Chernobyl exploded around 30 years ago.

In Norway, home to the Sami, a devastating fallout of cesium-137 contaminated water, forests, wildlife, and plants. The dangerous compound was also absorbed by lichen, a fungus favored by the reindeer. As they browsed on the lichen, the herds turned radioactive.[2]

Chernobyl might be the main star of the disaster, but lesser-known consequences hit many communities and species in horrible ways. Although the reindeer appeared unaffected, they were so radioactive that the Sami had to set all their animals free.

For people who had lived with reindeer for millennia, this was devastating. They lost a great source of food, clothing, income, and traditions. In an instant, the Sami went from coexisting with nature to living in one of the most contaminated regions on the planet. In 2014, tests proved that hundreds of reindeer remain radioactive. 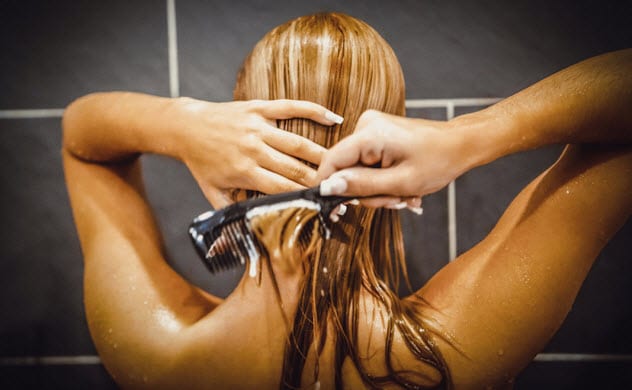 When a nuclear detonation vaporizes everything in the vicinity, fine material clouds the sky before raining down as fallout. This radioactive dust contaminates everything it touches. That is why, when people survive an attack, they are advised to remove all clothing, shower, and wash their hair—but never to use hair conditioner.

This odd advice could mean the difference between a long life and long-term radioactive exposure. Human hairs are strands of overlapping scales that often flare open like pine cones. Conditioner’s ingredients close the scales, giving the hair a smooth feel.[3]

Conditioner not only makes hair more sticky—inviting more radioactive dust to gather—but also locks away fallout between open scales. This is a recipe for radioactive hair. On the other hand, shampoo does not have the same scale-closing ingredients and is a safer option to flush contaminants from one’s head. 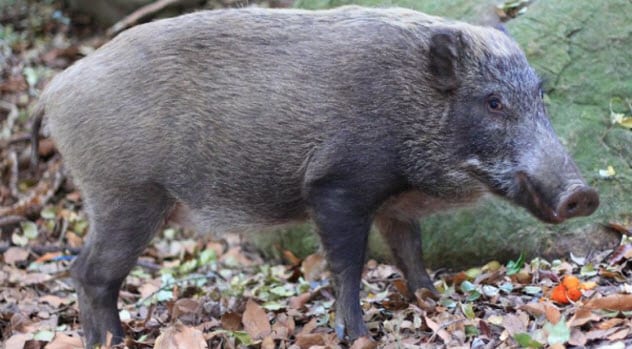 In 2011, Japan was hit by an earthquake and a tsunami. This double whammy triggered one of the 21st century’s worst disasters—the Fukushima Daiichi Nuclear Power Plant’s multiple meltdowns.

With the humans gone, some animals flourished. Just five years later, wild boars went from 3,000 to 13,000. They moved into abandoned buildings and raised families. A swarm of pigs needs a lot of food. Their raids on surrounding farmlands caused over US$900,000 in damages.

Before the meltdowns, the boars were kept under control by hunters. Now few locals would dare to eat one. The swine are seasoned with cesium-137. Since nobody loves radioactive pork chops, hunters leave them alone. Even boars born after the accident are radioactive from eating affected plants and animals.

Culling is in progress, but their size slows everything down. An average male weighs 90 kilograms (200 lb). Disposing of large carcasses is not easy when they cannot be processed. The three designated dumps can only hold 600. A special crematorium can safely filter out the radioactive compounds, but the nearest is in the city of Soma and can only handle three carcasses a day.[4] 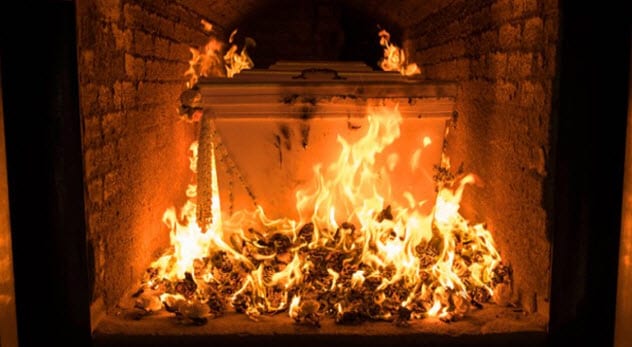 When a 69-year-old man died in 2017, he was cremated. Nobody knew he had visited another hospital three days before his death. There, the unnamed patient received lutetium Lu 177 dotatate. This radioactive compound was treatment for his pancreatic tumor. Had the crematorium known, they would never have fired up their client.

When mortal remains are radioactive, cremation releases the compounds into the air. Workers risk inhaling it, and contamination can spread to nearby buildings. This event was no Chernobyl, but 18.6 million similar procedures happen in the United States alone. Some might fall through the postmortem cracks, end up in crematoria, and release chemicals into the environment.

There are no statistics on how often this happens. This particular patient was only discovered because the first hospital warned the crematorium. Only then did staff look, and they found radiation in chambers and on equipment.

This is the first recorded contamination of crematory facilities but not the first incident. Scientists also found a radioactive isotope, technetium Tc 99m, in one of the workers. He most likely got it from another contaminated cremation.[5] 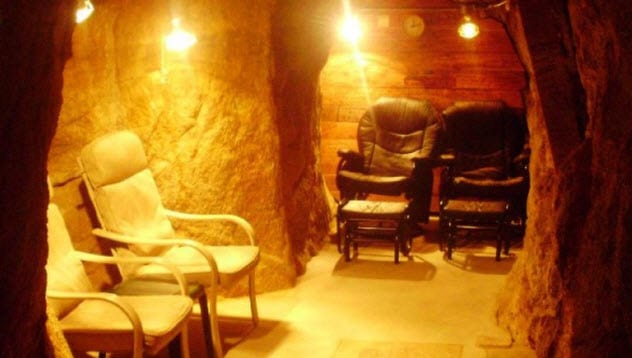 Despite the dangers, many visitors sit in the decommissioned uranium and gold mines and snort irradiated air for up to 60 hours over a span of 10 days. Some even drink water contaminated with radon. Those who believe in the benefits of the mines often report a decrease in pain. Scientists remain skeptical about radon’s so-called painkiller abilities and have voiced alarm over people seeking self-radiation as a solution.

Radon is measured in picocuries per liter (pCi/L). Just 4 pCi/L can be unsafe. The mines glow with a frightening 1,700 pCi/L. It is hard to imagine why anyone would willingly inhale something that kills 20,000 Americans annually (radon that accumulates in the home).[6] 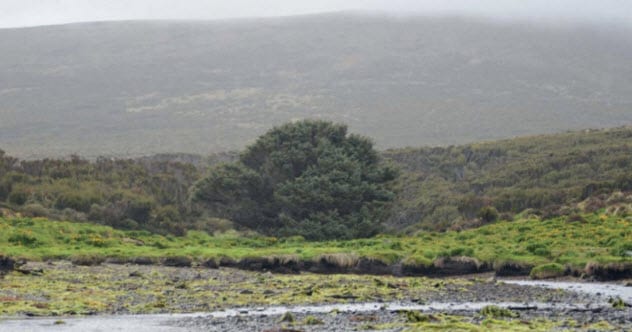 For years, scientists argued about a new epoch called the Anthropocene. Supporters said that humans, for whom the era was named, had a global impact similar to the iridium line. However, nobody could find the Anthropocene’s beginnings. Then researchers considered the time when nuclear testing began aboveground. Radioactive carbon-14 levels peaked during the 1960s because of this.

In 2018, they chose Campbell Island in New Zealand. Tests revealed that the island’s only tree, a Sitka spruce, and two old shrubs had radiocarbon signatures. All three clearly showed the peak of the 1960s.[7]

This could be the Anthropocene marker. Most aboveground nuclear tests occurred in the northern hemisphere, but Campbell Island is far south, making it a global signature. Carbon-14 also decays slowly. Thousands of years from now, geologists will still be able to measure the 1960s peak. 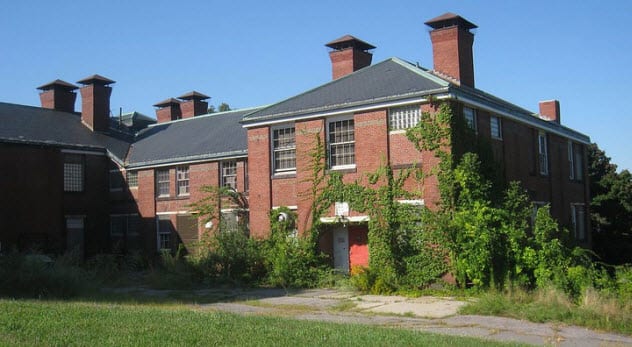 In Massachusetts, the Fernald State School once housed abandoned children. Staff often brutalized the boys. Seeking refuge, many joined the school’s science club in 1949. Members received tickets to sporting events, trips away from the school, gifts . . . and radioactive breakfasts.

The reason was ridiculous. A cereal brand, Quaker Oats, wanted to prove that its competition was not better. The other cereal, Cream of Wheat, was made with farina and claimed several benefits over oatmeal.

Quaker supplied the funding and oats, scientists of the time were keen on human experiments, and MIT performed these particular tests. It was also approved by the Atomic Energy Commission.

Around 74 Fernald boys unknowingly ate radioactive iron and calcium tracers. The tracers gave Quaker happy news: Oats inhibited iron and calcium’s absorption into the bloodstream the same as farina. It also proved that calcium went straight to the skeleton and provided the foundation for future osteoporosis treatments. 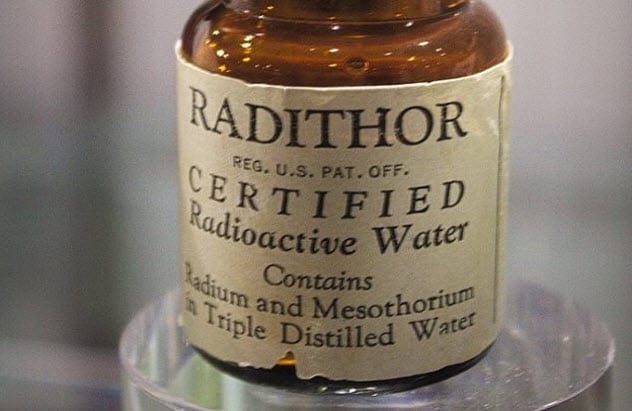 RadiThor hit the shelves in the 1920s. Sold in small bottles for the equivalent of $15 each in 2016 dollars, it was touted as an energy drink (that also cured impotence). It was a hit.

The drink’s recipe was simple—radium dissolved in water. Consumers knew the element was radioactive and, eventually, that it provided no energy. But RadiThor remained popular. Eben Byers loved it. A wealthy industrialist from Pittsburgh, he consumed it daily for three years. Believing the drink cured his broken arm, he gave glowing endorsements that made others take up the habit.

In the end, RadiThor killed him. Radium causes bone decay and, in this case, treated Byers gruesomely. Besides developing many bone problems, his skull became pitted with holes and he lost his jaw.

He died in 1932, the same year that the drink was removed from the market. Byers suffered a massive dose of radiation. Researchers expected it to be about 100,000 becquerel of radioactivity. When his body was exhumed in 1965, it read a whopping 225,000 becquerel instead.[9] 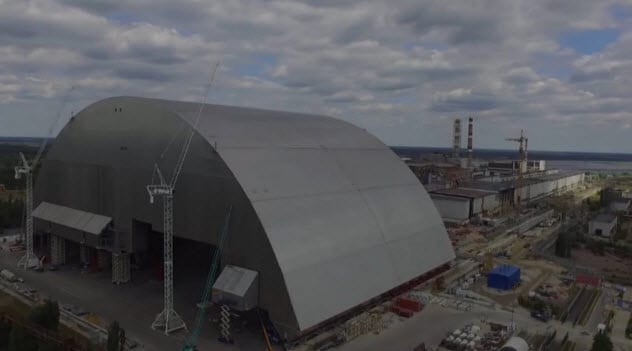 When Chernobyl’s reactor No. 4 exploded in 1986, it caused one of the world’s most tragic and lasting nuclear memories. The Ukrainian disaster sent radiation as far as Japan and the United States.

To contain the radioactive wreckage, a massive shell—known as the “sarcophagus”—was erected over the reactor. Fearing long-term exposure to the radiation, the builders rushed the job. The shell’s speedy construction left the metal structure without bolted or welded joints, and corrosion rapidly perforated the roof. Decades later, collapse was certain.

In 2016, the French consortium Novarka completed an even bigger bubble. Designed to enclose both the reactor and the sarcophagus, the new shield was taller than the Statue of Liberty.

Read more strange radioactive facts and stories on 10 Devastating Radiation Accidents They Never Tell You About and 10 Insane Ways We Used To Make Everything Radioactive.