Despite people traveling thousands of miles across the world to set eyes on a monument, there might be some locals who would gladly travel thousands of miles just to escape it. While you view a building or structure as a work of art, many locals may see it as a blight on their landscape or a cruel reminder of their history.

Here are ten landmarks originally hated by locals. Quite often, the reason for his enmity is the constructions in question being seen as eyesores. In some cases, they were also seen as egregiously expensive eyesores. 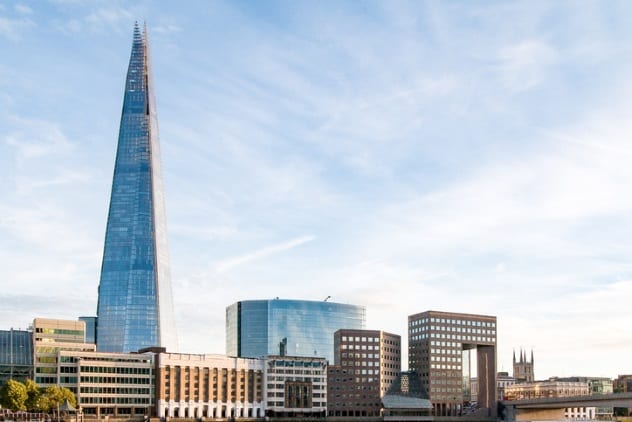 The Shard, formerly called London Bridge Tower, is the tallest building in the UK, standing at an incredible 310 meters (1,016 ft) and offering 72 floors and an observation deck. Since its construction in 2009, it has become one of the most famous landmarks in the English capital; however, it wasn’t always loved by the public.

The building was designed by the Italian architect Renzo Piano, after he was inspired by the adjacent railway lines and the masts of sailing ships. However, it faced much criticism before it was even constructed, with the English Heritage organization stating it would be like “a spike through the heart of historic London.”[1]

9 The Gate To The East
Suzhou, China 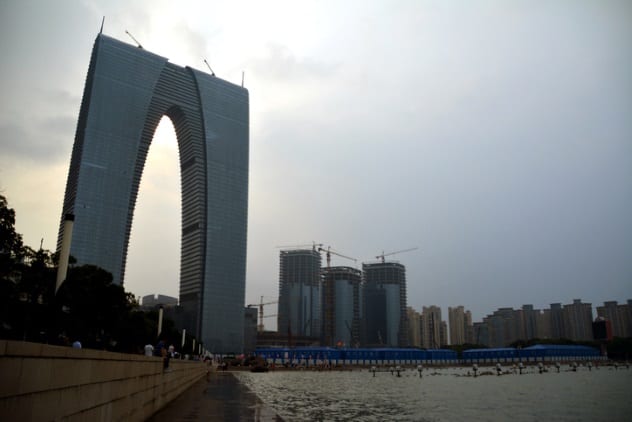 The Gate to the East (aka Gate of the Orient) is the largest conjoined skyscraper in the world and has received multiple awards and accolades since its completion in 2016, as it uses the most steel products and has been deemed the tallest gate on the planet. If all this wasn’t enough, it offers the deepest private wine cellar and tallest swimming pool in China.

It has, however, received much criticism. Locals reportedly described the building as “humiliating” and that walking through the arch was “like being forced to crawl between someone else’s legs.”[2] The media also referred to the landmark as “a climactic icon on the 21st century architecture of spectacle.” 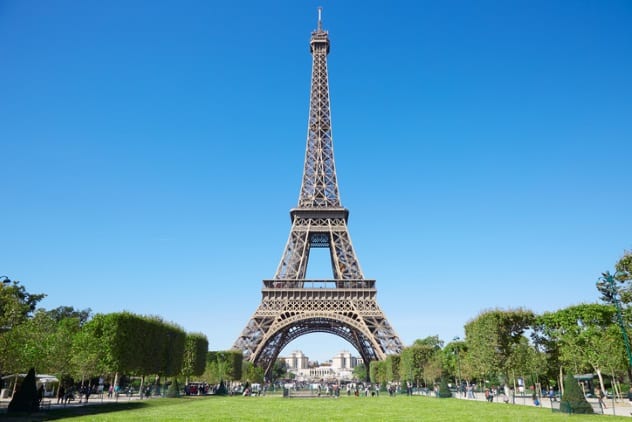 The Eiffel Tower is one of the most famous landmarks in the world and is often associated with elegance and romance. It might, therefore, be hard to believe that it wasn’t always so popular with Parisians. The iconic building was erected to serve as an entrance into the 1889 World’s Fair, which was celebrating the 100th anniversary of the French Revolution.

However, the steel structure looked out of place with the French capital’s classic architecture. Parisian academics and artists were not afraid to express their dislike for the landmark, stating: “We, writers, painters, sculptors, architects, passionate lovers of the beauty, until now intact, of Paris, hereby protest with all our might, with all our indignation, in the name of French taste gone unrecognized, in the name of French art and history under threat, against the construction, in the very heart of our capital, of the useless and monstrous Eiffel Tower.”

Despite the outcry and the threat of demolition, it now serves as an international symbol of love and romance.[3] 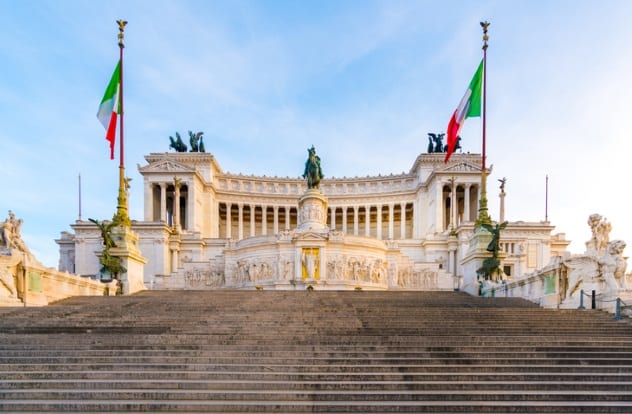 Construction began on the Vittorio Emanuele II Monument in Rome, Italy, in 1885 in honor of Victor Emmanuel II, who served as the first king of a unified Italy. The dominant building is flanked by Piazza Venezia and the Capitoline Hill and is largely made from white marble.

However, despite the building’s grandeur and opulence, many locals disliked the architecture, giving it a variety of nicknames, such as “false teeth,” “wedding cake” and “the typewriter.” They also believed it was created from the wrong marble color and was far too large.[4] 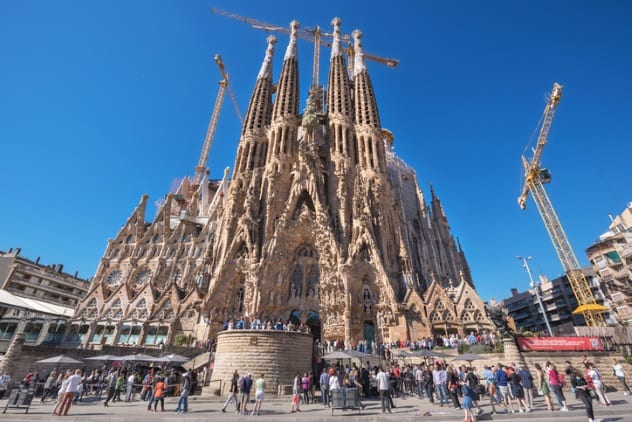 Sagrada Familia is an unfinished Roman Catholic church and the most famous edifice in Spain. Construction began on the church in 1882, and it is expected to be completed in 2026. It is one of many architectural designs by the Catalan architect Antoni Gaudi in Barcelona, who also designed Park Guell and Casa Mila. There were, however, many people who would have preferred for the church to have been torn down.

Pablo Picasso once stated he wished for those responsible for the design to be “sent to Hell,” and George Orwell went as far as to say it was “one of the most hideous buildings in the world.”[5] 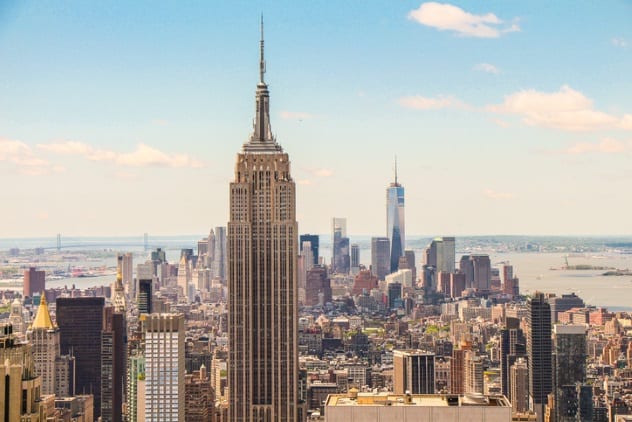 It is hard to imagine the Big Apple without the Empire State Building, which provides both locals and tourists with breathtaking views of the New York skyline. However, the 102-story skyscraper was not an instant hit with locals, who viewed its construction as a waste of money that was located too far away from public transport.

The building’s construction came in $19 million under budget and was completed ahead of schedule, with the building officially opening on May 1, 1931. However, as the opening overlapped with the Great Depression, only 23 percent of the office space was rented in its first year, which led to it being dubbed the “Empty State Building.”[6] However, new life was breathed into the landmark when the building was purchased, renovated, and aggressively marketed as the world’s tallest building. It was later selected as one of the greatest engineering achievements in US history by the American Society of Civil Engineers. 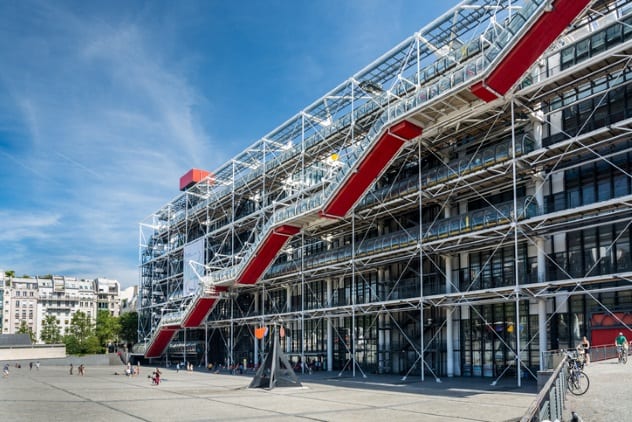 It is easy to see why locals might not be too fond of Centre Pompidou, as the building looks as if it’s covered in scaffolding. The Centre was completed in 1977 and offered the first collection of modern and contemporary art in Europe.

The exoskeleton design is not only unsightly, but it clashes with the capital’s historic architecture, as it is surrounded by beautiful, old buildings, including the oldest surviving house in the city, which was built in 1407. The brains behind the building were Englishman Richard Rodgers and Italian Renzo Piano. Rodgers once commented that a Parisian woman was so infuriated by the building that she hit him on the head with her umbrella.[7]

3 Valley Of The Fallen
Madrid, Spain 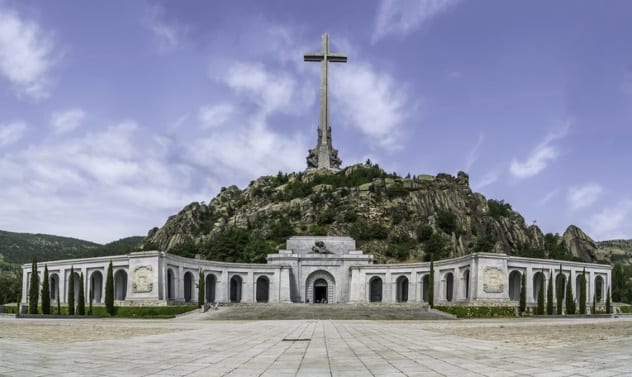 It is hard to believe locals could possibly hate a monument that commemorates those killed in Spain’s 1936–1939 civil war. That’s because it also serves as the grave site of General Francisco Franco, a brutal dictator who reportedly forced thousands of political prisoners to build the monument. Many believe Franco stated he would reduce a convict’s sentence if they volunteered to join the work detail; however, there have been allegations that he enforced labor. In fact, Jaume Basch, a Catalan politician, described the landmark as “something like a Nazi Concentration Camp” in 2017. The site reportedly holds 40,000 bodies, but only Franco and Jose Antonio Primo de Rivera, the National Chief of the Falange Espanola de las JONS, are buried inside the church.

Security was tightened after the site was bombed by anti-fascists in 1999. While many people would happily pay the €9 admission fee to either lay flowers or spit on Franco’s grave, both actions are no longer permitted. It now serves as one of Spain’s most hated landmarks, which you can spot miles away on the A-6 motorway, as the large granite cross can be seen above the rock of the Sierra de Guadarrama.[8] 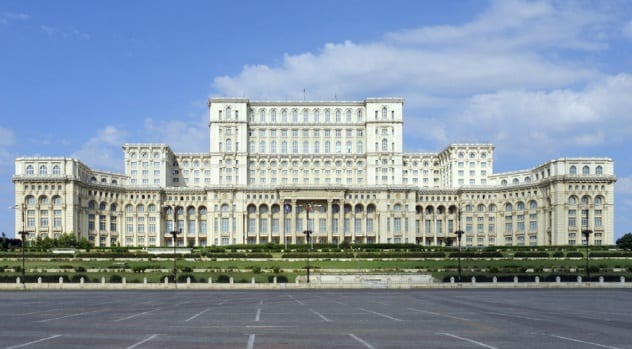 Bucharest’s Palace of Parliament is the most hated building in the city. Thanks to its opulent architecture, which glows gold at night, it is now the most popular tourist attraction in Bucharest, attracting tourists from all over the world. However, locals despise the building, as it was originally built for Nicolae Ceausescu, a communist dictator. While the nation was forced to endure extreme poverty, Ceausescu was plunging the country’s wealth into building his palace. During this time, parents were unable to feed their children and were forced to place them in the state’s care.

Despite the country’s communist regime falling in 1989, residents across the city are reminded of their nation’s history every time they set eyes on the ostentatious house of Romania’s parliament.[9] 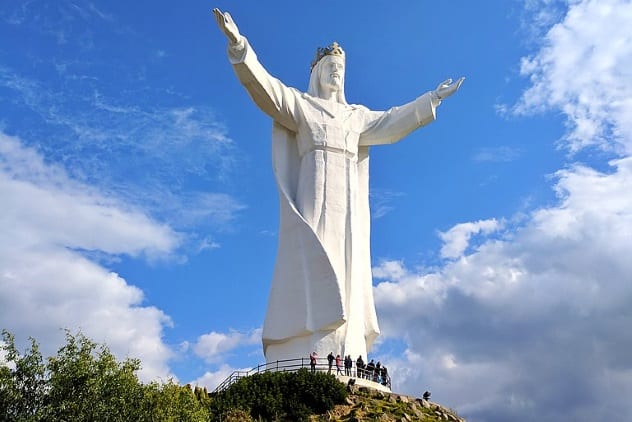 The Christ the King statue is the tallest statue of Jesus on the planet, standing at 33 meters (108 ft) and rivaling Rio de Janeiro’s Christ the Redeemer. Despite being crowdfunded for $1.4 million by locals and other towns, it has become one of the most controversial landmarks in Poland.

The erection of the monument caused arguments between both Christians and atheists. It was also heavily criticized for its location, as it is situated near the German border by the Berlin-Warsaw motorway, near a large supermarket. However, one of the latest controversies is the recent installation of antennas within Jesus’s crown to broadcast an Internet signal for Divine Mercy Parish.[10]

10 Unassuming Resorts With a Spicy Twist