Several famous photographs of Adolf Hitler are forgeries. While Hitler did fake some of his photos for propaganda purposes, authors, social media users, and the media have also made their own fakes for different reasons. Some were even faked while Hitler was still alive, and he had a hard time proving they were forgeries.

Some mischievous forgers have also devoted their efforts to making fake paintings, which they often pass off as originals painted by Hitler himself. To be clear, Hitler did create some artworks while alive. However, there have been lots of fakes created by con men trying to make a quick profit. 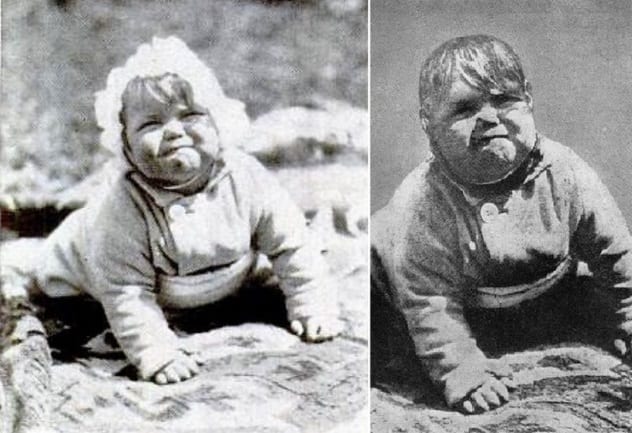 In 1931, Harriet May Warren took a photo of her two-year-old son, John May Warren, outside her home in the US. She forgot about the photo until seven years later, when she saw it published in Life magazine. However, the picture wasn’t exactly the same as the one she took years earlier, and Life sure wasn’t identifying the baby as hers.

Instead, Life claimed the photo was of a baby Adolf Hitler. The face of baby John had been doctored to resemble Hitler. This included his hair, which was transformed into Hitler’s trademark parting. His look and posture were also altered to make him appear more menacing. “Baby Hitler” looked angry—like he was ready to fight.

Harriet wrote to inform Life that the baby was actually her son, John, and not Hitler. Life published a retraction. However, it was too late. Other newspapers and magazines in the US and Europe republished the photo and continued to claim it was Hitler.

The photo soon got to the real Hitler, who was infuriated. He ordered his Nazi party agents to inform everyone that he was not the baby. The Nazi ambassador in the US even sent a cuter photo of baby Hitler to the Chicago Tribune and demanded that they publish a retraction about the doctored photo of baby John.

The Nazi effort was futile, and Western media continued spreading the fake photo. Some even edited the picture to make the baby appear more evil than he already looked. The propaganda war continued after World War II broke out in 1939. Nazi forces in occupied Poland even distributed a book containing pictures of the real baby Hitler to debunk claims that the menacing baby was Hitler.

Unfortunately, John died a few months after the doctored pictures first appeared in Life. He was riding home on a bicycle when he fell, breaking the bottle of milk he was carrying. Fragments from the bottle punctured his heart as he hit the ground. He was eight.[1]

9 Hitler At A Rally 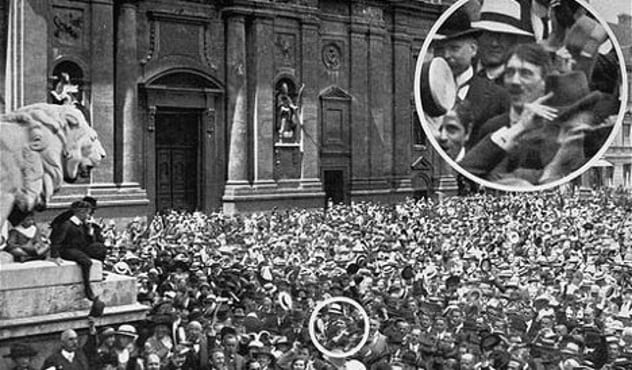 One of the more famous photographs of Adolf Hitler purportedly shows him attending a pro-war rally in Munich on August 2, 1914, at the beginning of World War I. The photographer was Heinrich Hoffmann, who would later become Hitler’s personal photographer.

However, investigations by German historian Gerd Krumeich indicate that the photo could be a forgery. Krumeich reached this conclusion after he could not find Hitler in several pictures taken by other photographers. He also found another edited version of the famous photo that depicted Hitler’s hairstyle a bit differently.

There are indications that Hoffmann and the Nazi party doctored the photo for propaganda purposes. The photo first appeared in the March 12, 1932, edition of the Nazi newspaper after rivals accused Hitler of not being patriotic enough. Nazi newspaper editors published the photo with the caption “Adolf Hitler, the German patriot . . . in the middle of the crowd stands with blazing eyes—Adolf Hitler.”[2] 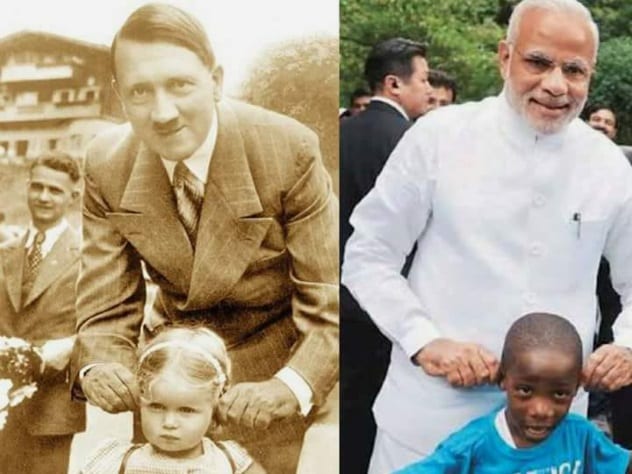 Photo credit: The Times of India

In 2019, Divya Spandana, a former member of the Indian parliament and social media manager of the Indian National Congress (INC) party, tweeted a side-by-side photo of Adolf Hitler and Narendra Modi, the prime minister of India. The pictures showed both men holding the ears of children. Spandana captioned the tweet, “What are your thoughts?”

Hitler actually had his hands on the girl’s shoulders in the original picture. However, someone edited and replaced his hands with Modi’s to make it seem like he was holding the girl’s ears. Curiously, a Facebook page called With INC had uploaded the photo back on July 25, 2018. However, it didn’t go viral at the time.[3] 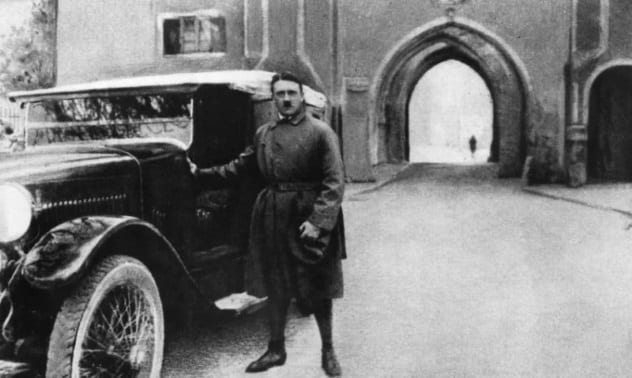 Hitler outside Landsberg Prison is another fairly famous photo. The photo depicts Hitler posing outside the gates of Landsberg Prison in Bavaria, Germany. Hitler is standing beside a Mercedes car in the foreground with the huge gates of the prison in the background.

In truth, the photo is real. However, it was deliberately miscaptioned. The photographer was Hoffman, who had gone to the prison to pick up Hitler immediately after his release on December 20, 1924. Hitler was serving a five-year sentence for treason but was pardoned after serving just nine months in Landsberg.

Hoffman tried taking Hitler’s photo outside the prison gates until he was stopped by a prison guard, who threatened to seize his camera. So he and Hitler drove to the southern gate of the town of Landsberg, also called the Bayertor or the Bavarian Gate, to take the shot. Hoffman later said he chose the gate because it looked like the entrance to a fortress.[4] 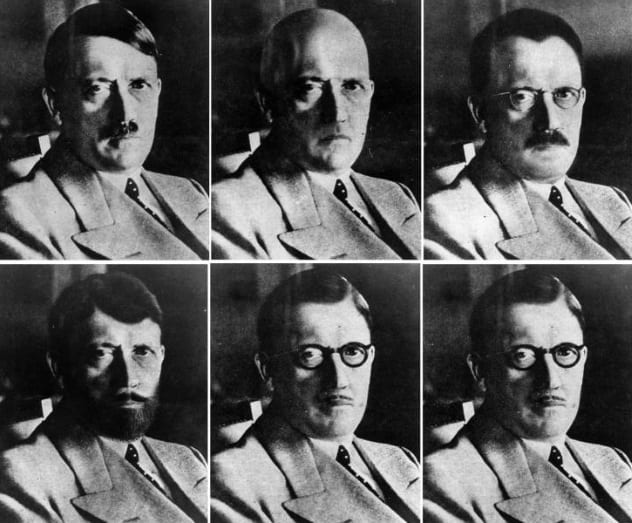 Germany was already losing the war by 1944. To the Allies, it was clear it was only a matter of time before the German military crumbled in defeat. This generated concerns that the Nazi top hierarchy, including Adolf Hitler, would alter their faces to make themselves unrecognizable and flee Germany after the defeat.

In Hitler’s case, there were concerns that he could cut his trademark haircut and mustache or tamper with some other discernible feature. Hitler could also adopt some newer features, like growing a beard or wearing glasses, which could still make him harder to identify.

This made The New York Times contract Eddie Senz, a famous and successful Hollywood makeup artist, to create a series of images depicting Hitler with or without several features. There are claims that Senz and The New York Times were working with the Office of Strategic Services (OSS) to create the photos.

Senz created several photos showing Hitler without some of his trademark features or with some newer features. Some depicted Hitler with a beard, a new hairstyle, or with glasses. Others depicted him with a bald head or a different mustache. The New York Times published the photos in 1944.[5] 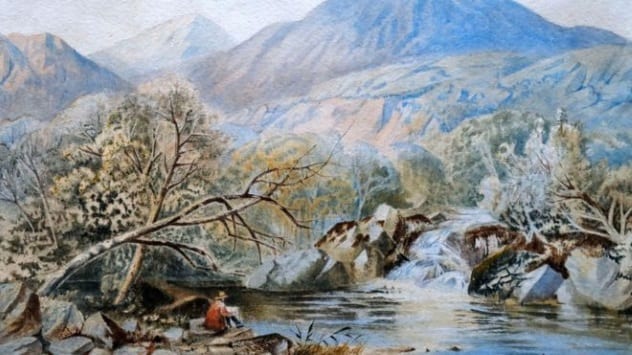 Hitler had a liking for art. In fact, he tried to enroll at the Vienna Academy of Fine Arts but was rejected twice. Undeterred, he went on to work as an artist while working a second job as a laborer in the early 20th century.

Hitler later claimed he created three paintings every day during his time as an artist. However, he had most of his unsold paintings destroyed after he became fuhrer. Nevertheless, some of the paintings survived and fetch considerable prices today.

This has created an entire industry dedicated to the creation and auctioning of fake paintings attributed to Hitler. In January 2019, the German police raided the Kloss auction house in Berlin and seized three fake paintings just before they could be auctioned. 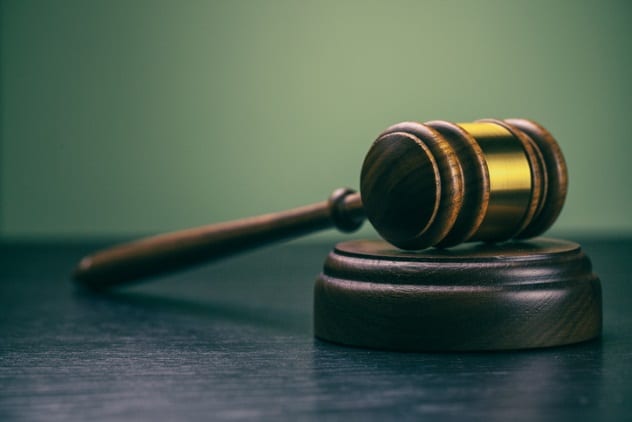 In February 2019, German police raided the Weidler auction house in Nuremberg and seized 63 fake paintings attributed to Hitler. Weidler had planned to auction 23 of the paintings alongside a vase, tablecloth, and chair which were also claimed to have been owned by Hitler.

As a result, five paintings still believed to be Hitler’s work failed to sell at the auction, as did the chair. The most expensive of the paintings depicted a mountain and lake and had a minimum bid price of €45,000 ($51,000).[7] Only the tablecloth and vase got new owners. 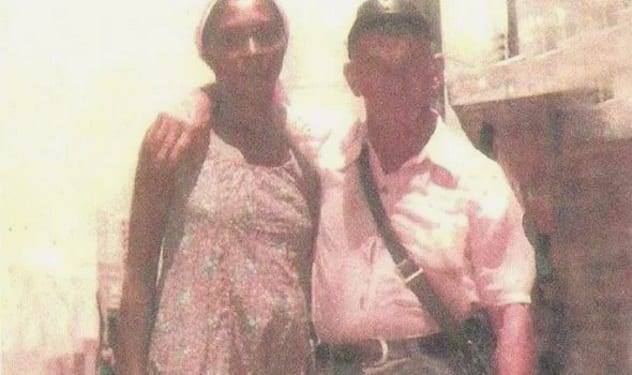 It is generally agreed that Hitler committed suicide in his bunker as Allied troops closed in on his Berlin hideout. However, some dispute this theory. Conspiracy theorists claim Hitler fled Germany and went on to live the rest of his life somewhere else. One popular claim is that he traveled to some South American nation. Other ridiculous theories state that he fled to either Antarctica or the Moon.

Author Simoni Renee Guerreiro Dias believes Hitler fled to South America after the war. In her book, Hitler in Brazil—His Life and His Death, Dias claims Hitler fled to the town of Nossa Senhora do Livramento in Mato Grosso state, Brazil. Dias adds that Hitler changed his name to Adolf Leipzig and had a black girlfriend named Cutinga.

Dias’s evidence is a grainy photo depicting the alleged Hitler with Cutinga by his side. Hitler supposedly sought a black girlfriend because it would make it unlikely that anyone would think he was Hitler. However, Dias did not explain why Hitler still maintained his first name. Dias added that Hitler died at the age of 95 in 1984.[8] 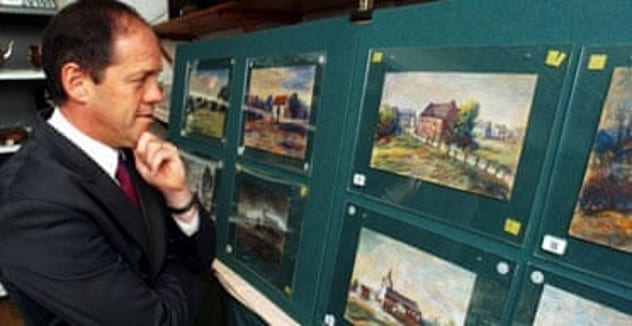 In September 2006, auctioneer Ian Morris planned to auction 21 paintings supposedly done by Hitler. The authenticity of the paintings was reportedly confirmed by historian Hugh Trevor-Roper, who reached his conclusion after comparing the signatures on the paintings with a diary supposedly owned by Hitler.

The diary was found alongside some paintings at a plane crash site in 1945. Morris claimed the paintings were later lost but rediscovered in the 1980s. Trevor-Roper determined that the paintings and diary were authentic after observing that their signatures were the same.

However, according to Jonathan Jones of The Guardian, the paintings and diary are forgeries. In fact, each was created to make the other seem authentic and fool historians. They were the handiwork of Konrad Kujau, a renowned forger who created several fake items he attributed to Hitler.[9] 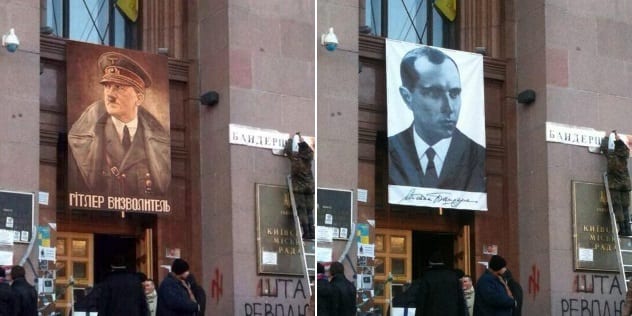 In April 2014, Russian and Ukrainian Twitter accounts were buzzing over a photo showing a portrait of Hitler on a building in Kiev, Ukraine. The photo was captioned “Hitler the liberator.” The photo was first tweeted in February 2014 by a Twitter account called Pravdivaya Pravda. However, it went viral after it was retweeted by several prominent personalities in Russian media.

The photo is definitely a fake, considering that the real portrait on the building contains shows a man named Stepan Bandera.[10] In fact, a second photo uploaded to Twitter shows the portrait of Bandera. It also contains the same people seen in the Hitler’s photo in the same positions.

Bandera was a revolutionary who fought for the independence of Ukraine from the Soviet Union after World War II. However, there are accusations that he had cooperated and worked with the Nazis during the war. This time, it seemed like Russian media doctored the photo and replaced his portrait with Hitler’s to stir anti-EU sentiment in Ukraine.

This doctored photo appeared not long after Viktor Yanukovych, the pro-Russian president of Ukraine, was pressured to resign after series of protests by pro-EU protesters. Russian media often referred to the protesters as pro-Nazis. Yanukovych’s resignation was followed by the infamous Russian annexation of Crimea and the War in Donbass.

Read more weird stories pertaining to one of the most evil men in history on 10 Tumultuous Tidbits Surrounding Hitler’s One Testicle and 10 Bizarre Tales About Adolf Hitler.