The giraffe ranks among the most familiar of the zoo and park animals. Even so, giraffes continue to harbor surprising facts. The creatures can turn black or white and make inexplicable noises at night. They even ogled a Chinese emperor during the 1400s.

There are funny things in their armpits and a puzzling disease creeping up their legs. Even though giraffes are endangered, it is often conservation breeding programs that decide whether they are allowed to live or die.

10 There Are Four Species 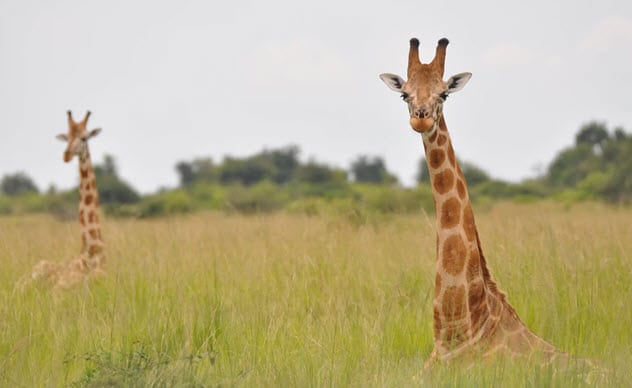 Until 2016, there was one species of giraffe. For those who cared to squint harder at subtle differences between ossicones (head “horns”), coat patterns, and different habitats, there were nine subspecies. As the classifications had been made between 1758 and 1911, modern researchers felt that the requirements were unreliable because giraffes had not been studied as deeply as other big African mammals.

Unlike lions and elephants, there is plenty that remains unknown about giraffes. To discover the truth, a five-year-long study became the first to genetically analyze all the nine subspecies.

The DNA tests proved that the “nine” were actually four distinct species—the reticulated giraffe (G. reticulata), Masai giraffe (G. tippelskirchi), northern giraffe (G. camelopardalis), and southern giraffe (G. giraffa). As they do not breed with each other, the correct identification of species is a positive step forward to ensure that all four survive.[1] 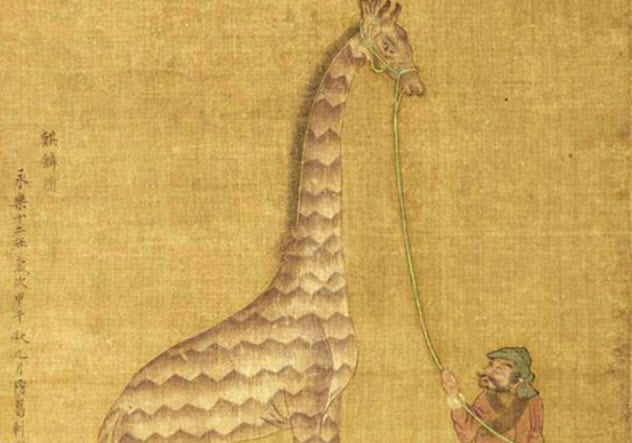 During the 1400s, Emperor Yongle of China wanted to explore the world. He sent a fleet of ships on seven expeditions which made it as far as South Africa, landing at the modern-day Cape of Good Hope. Yongle liked to collect exotic animals, and foreign nations gave him rhinoceroses, peacocks, elephants, and bears as gifts.

During the fourth expedition, the Chinese arrived at Bengal and met with envoys from Malindi (Kenya). The latter handed over a giraffe, which was promptly stabled aboard one of the Imperial ships. The animal’s size was not a problem. The vessels that sailed during this expedition remain the biggest wooden vessels ever constructed in history.

Despite Yongle’s vast collection of strange animals, the giraffe made such an impression on the emperor that it became the only animal he asked the court artist to draw. The image added a mythical flavor, suggesting that it was a qilin—a creature comparable with the West’s unicorn.

A year later, a second giraffe arrived at the royal court. Despite the animals’ strange story, there is no record of what became of the spotty pair.[2] 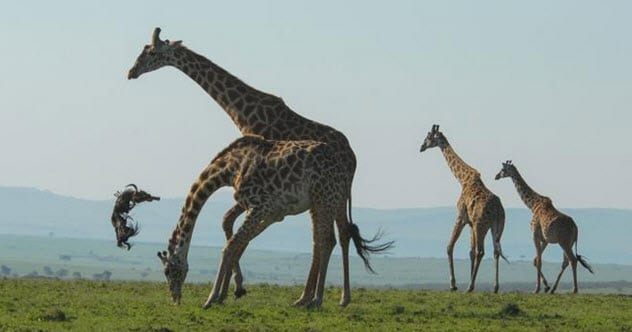 National Geographic photographer Corinne Kendall visited a reserve a few years ago. Once inside Kenya’s Masai Mara National Reserve, she took photos of a macabre incident. Two adult giraffes were busy with a dead wildebeest. Not only did they mouth the carcass, but they occasionally tossed it into the air.

This grated against the giraffe’s image as a gentle herbivore. Experts reviewed the photographs and found the behavior was not as deviant as it first appeared. It was likely a case of osteophagy. To keep their own skeletons healthy, herbivores need calcium and phosphorus.[3]

For this reason, these mammals gnaw on bones. Recently, another giraffe was filmed licking the skull of a dead buffalo. One of the experts who assessed Kendall’s pictures also told National Geographic that he regularly witnessed the fascination giraffes have for carcasses during his fieldwork. An average of about six times a year, he would encounter giraffes nosing around bones.

7 Birds Sleep In Their Armpits 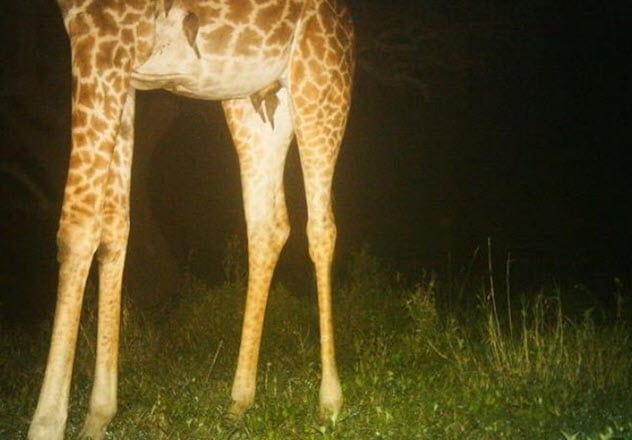 Snapshot Serengeti was a project that ran for years inside the Serengeti National Park in Tanzania. It involved camera traps that automatically took photographs when an animal moved nearby. At one point, a camera documented something that had never been seen before.

Researchers have always known that a brown bird called the yellow-billed oxpecker grooms giraffes and other large African mammals. The tiny creature removes ticks and even feeds on the host’s blood, eye goop, and nose mucus. However, this activity was only observed during the day.

One night, a giraffe triggered one of the traps, which took a series of snaps. They showed that the animal’s armpits contained clusters of sleeping oxpeckers. Never before had anyone realized that the birds sometimes chose to overnight on what was basically their food source.[4]

Although it was a surprising find, it was not hard to see why the oxpeckers did it. Apart from ensuring that they stayed with their food-providing host, the giraffe’s armpits were also safe and warm. 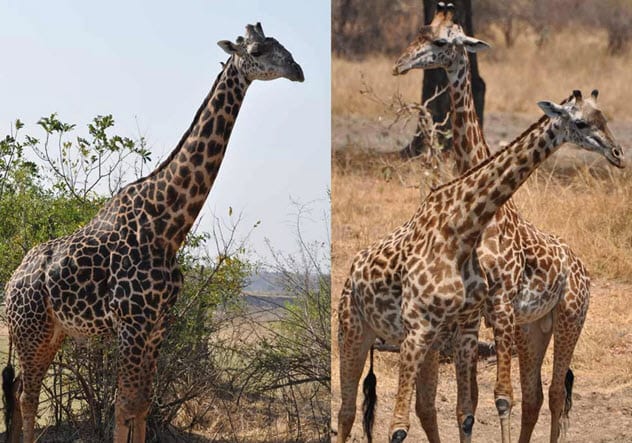 Giraffe dudes do something unusual. As they age, their blocks become black. In 2012, curious researchers studied 36 males, all from the Luangwa Valley in Zambia. They knew the precise age of 10 and estimated the ages of the rest based on how dark their patterns were.

The animals’ data had been compiled over 33 years, which provided a rich source to plumb about the color change and lives of males. A calf weans at two years old and leaves its birth environment between four and eight.

The darkening first becomes obvious when bulls turn seven or eight. The black starts in the middle of the brown patches and bleeds outward toward the edges. This process takes almost two years, and on average, males have a full set of coal-black spots by the time they are 9.4 years old.[5]

Although the 2012 study was the first to establish a timeline, it could not find the cause. As only males experience the change, it could have something to do with testosterone levels. Bulls mature around age 10, which is around the time that their transformation is complete. 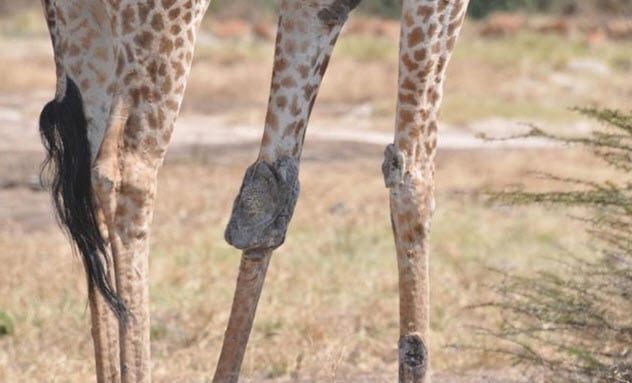 In 2014, Arthur Muneza had to pick an animal to study for his master’s at Michigan State University. Like many others, he considered the popular choices—elephants and African predators. However, the biologist chose giraffes when he heard that they suffered from a strange and understudied skin condition.

Giraffes are somewhat neglected when it comes to megafauna studies. Even the affliction, which may be a contributing factor to their dropping numbers, received a casual name—giraffe skin disease (GSD).

However, Muneza was on fire. He dug into past research and cornered veterinarians as well as zoo and park officials. He scoured old studies for the symptoms, which include lesions on the legs and neck. The areas often turn gray, bloody, and crusty.

Just eight sources mentioned anything about it. The questionnaires he sent out to those working with giraffes only garnered 63 responses. Zoos reported 14 cases of GSD in their captive specimens. Frighteningly, the Ruaha National Park in Tanzania reported that 79 percent of their giraffes had the disease.[6]

Muneza’s collaboration with experts is ongoing to unravel what causes GSD, how it spreads, and how it can be cured. 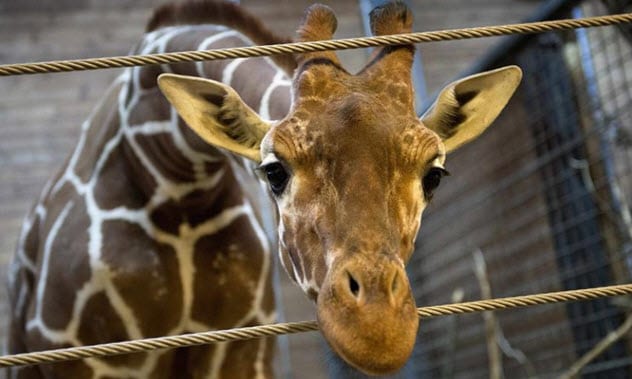 In 2014, Copenhagen Zoo in Denmark considered euthanizing one of their giraffes. As Marius was a healthy 18-month-old, thousands signed a petition for his life to be spared until a new home could be arranged. The zoo’s reason was that Marius had nothing to add to their international breeding program. They also said they could not keep the growing male in case it led to fighting with others.

Despite the local and international outcry to make an effort to relocate the giraffe, Copenhagen Zoo refused to do so. On a Sunday morning, a staff member fed Marius his favorite meal of rye bread and then shot him. The giraffe was dismembered in front of visitors before his parts were distributed among the zoo’s predators and research facilities.

The demise of Marius caused such anger that the zoo’s staff received death threats against themselves and their families. Marius’s short life and public slaughter highlighted something of which few citizens are aware. It is a common practice for zoos to kill healthy animals when their genetics fail to meet breeding standards, when there is no space, or when they do not attract crowds.[7]

3 They Hum At Night 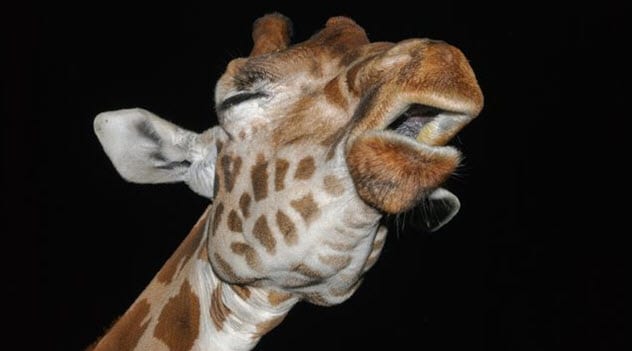 Giraffes are quiet creatures. So quiet, in fact, that scientists became suspicious. After all, they move in herds with social structures. This strongly suggested some sort of communication beyond the occasional kick and snort.

In 2015, a strange clue was captured at three European zoos. One theory was that giraffes get chatty on frequencies that humans cannot hear. To test this, researchers left recording devices near the creatures’ enclosures. After slogging through 1,000 hours of recordings, the researchers found that giraffes do make a sound—they hum.

The noise resembled something between a swarm of bees and monastic chanting. The humming happened at a very low frequency but still fell inside the range of human hearing. Despite this, zoo staff heard it for the first time only when they listened to the tapes.

The exact purpose of the sound remains mysterious. Since it happens exclusively at night, it could be a way for giraffes to stay connected in the dark. It could also be a passive sound related to sleeping, like snoring or dreaming.[8] 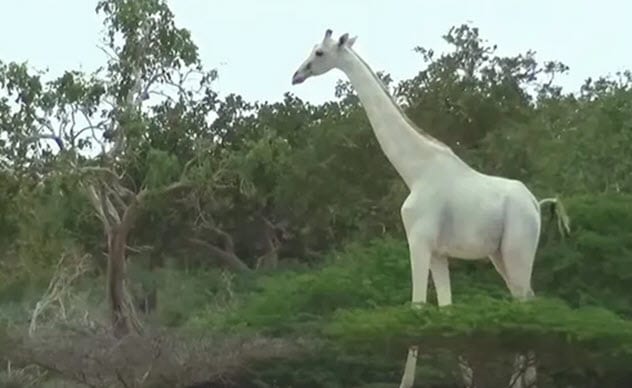 In 2017, a villager in Kenya’s Garissa County saw two white giraffes. He told conservationists about the bleached pair, and soon, the animals were tracked down. They lived in the best place for such rare creatures—the Ishaqbini Hirola Conservancy.

The species was identified as the vulnerable reticulated giraffe. The two animals were also family—a mother and her calf. When the cow noticed the rangers, she calmly hid her baby in the bushes and positioned herself between the infant and the humans, who stood filming a few yards away.[9]

Not only did the camera capture the curious beauty of white giraffes but it was also the first footage of specimens with leucism. This genetic condition prevents the normal formation of pigment inside skin cells. It differs from albinism in that dark pigment can still flourish inside soft tissues, which was why the mother and calf had dark eyes and some body coloring.

1 They Are Critically Endangered 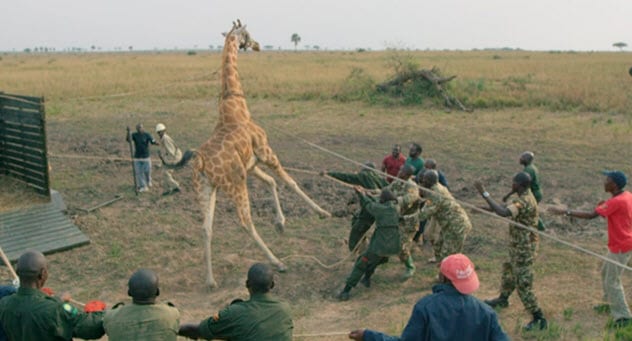 The plight of the African elephant is well-known. There are only about half a million of the creatures left in the wild. That being said, elephant numbers look fantastic against the remaining wild giraffe population—90,000. The last 15 years saw a 40 percent die-off thanks to habitat loss and poachers. Giraffes are now extinct in seven African countries.

Despite these glaring warning signs, their official conservation status remains merely “Vulnerable” as opposed to the “Endangered” African elephants. However, there is hope in small pockets.

In 2016, conservationists learned that oil had been discovered in Uganda and that prospectors planned to move into Murchison Falls National Park. A particularly vulnerable group of giraffes lived on only one side of the Nile, and unfortunately, it was the side where the oil was.

A daring mission floored 20 of the awkward but dangerous animals, packed them onto a ferry, and released them on the other side. Not only did the small herd thrive, but as researchers followed them, they filmed an unknown behavior for the first time. At night, the animals took turns watching for predators while the rest slept with their necks folded over their backs like swans.[10]