As the old saying goes, “Nothing is certain but death and taxes.” Most of us hope to live long, healthy, and happy lives before succumbing to the inevitable. In a perfect world, there would be no illnesses or accidents. We’d just close our eyes one night and simply not wake up.

Unfortunately, it is not a perfect world—far from it actually. Terrible illnesses and accidents do occur every day. Below is small example of some horribly unconventional ways that real people have died. 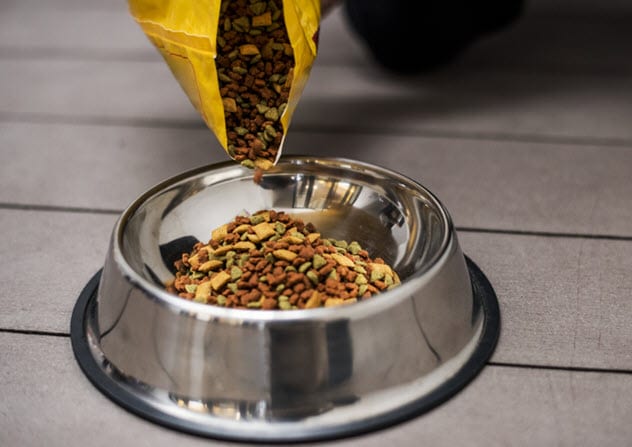 Sometimes, our love of and obsession with animals can come back to bite us in the rear. In the end, these two ladies would have been far better off just saying no to pet ownership.

Melany Paula Campos’s sister came home one day and immediately knew that something was amiss. The neighbors met her upon her return to complain that her dogs had been barking wildly for hours and just wouldn’t shut up.

After investigating to see what was wrong, she found her sister buried beneath four large bags of dog food. Apparently, when her sister was attempting to feed the 40 dogs that they had taken in, the bags fell on her and she suffocated under their weight.

In another sad tale of dog feeding gone wrong, Carol Williams tried to feed her pet dog after having too many cocktails. While leaning down to fill Fido’s bowl, she apparently was overcome from her intoxication and fell face-first into the dog’s bowl.

As if smothering in dog food wasn’t bad enough, the edge of the bowl dug into her neck and she eventually passed away. Once she was discovered, she was found to be three times over the legal limit.[1] 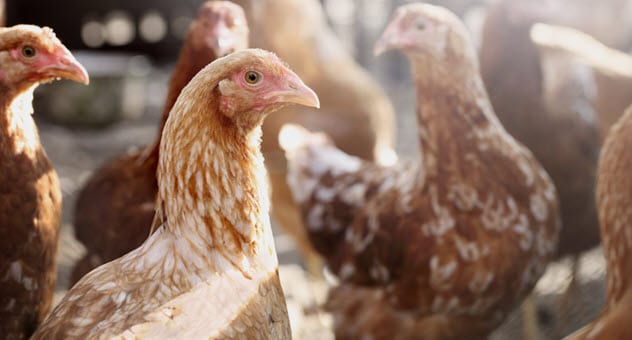 In another disturbing story of people “done wrong” by their own animals, a farmer by the name of Frans Jaumotte was found dead on his farm. Police were anxious to discover the reason behind his apparent mutilation and death.

During their investigation, they found that there was no chicken feed anywhere on the farm. His 200 chickens apparently didn’t take this very well.

Since the will to live is great in all living beings, they did what they had to do to survive. They descended upon Jaumotte and pecked out his eyes and heart. All in the name of survival. It was him or them, and he was vastly outnumbered.[2] 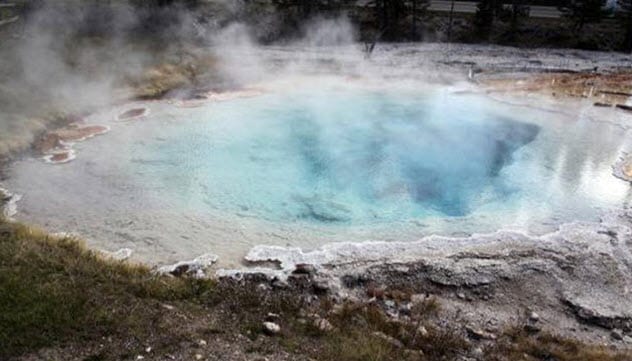 David Allen Kirwan and his friend Ronald Ratliff set out to enjoy a beautiful day of nature in Yellowstone National Park. After parking their vehicle to take a quick look at one of the springs, Ratliff’s dog decided to join them and escaped from the car.

Inexplicably, in his excitement, the pooch proceeded to dive into the spring that they were viewing. The water temperature would later be determined to be 94 degrees Celsius (202 °F).

The poor dog quickly began to yelp as the pain set in. Ignoring the pleas of other visitors to stay out of the hot spring, Kirwan acted without thought and dove in headfirst to save the dog. He was able to grab the dog and tried his best to save him. But ultimately, Kirwan had to release the animal and try to pull himself out of the spring.

His friend Ratliff pulled him from the spring while sustaining second-degree burns on the bottom of his feet by doing so. Another visitor helped Kirwan to the sidewalk.

He reportedly said, “That was stupid. How bad am I?” Then he added, “That was a stupid thing I did.”

He was so badly burned all over his body that he was blinded and most of his skin was coming off. Another well-meaning visitor tried to comfort him by removing his shoes but had to stop when his skin was coming off with it. Rangers reported that they found two large pieces of skin by the spring in the shape of hands.

Kirwan was rushed to a clinic and attended to by a burn specialist. Although Kirwan was conscious and seemingly in no pain, he eventually succumbed to his injuries. The burns were just too severe. Ironically, there were pamphlets in their vehicle warning about the dangers of the park. They had not read them.

The dog was never able to be rescued and died in the spring.[3] 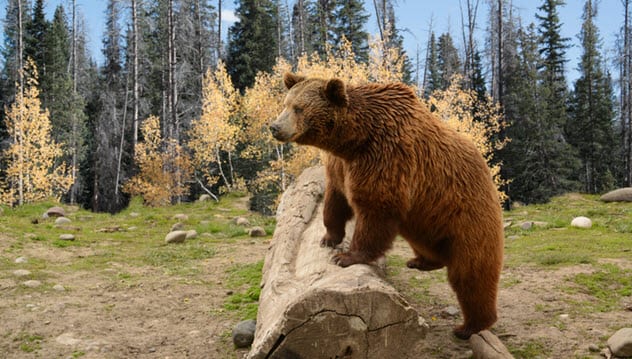 Humans arrogantly claim to be at the top of the food chain, but sometimes, nature has a way of correcting that assumption for us.

In 1984, a young woman named Brigitta Claudia Fredenhagen would learn that the hard way. Despite being warned about bears and the dangers of hiking and camping alone in Yellowstone National Park, she still chose to set out on her adventure. When she failed to meet her brother at the designated time and day, he reported her missing to the local rangers.

Upon finding her campsite, they made some grisly discoveries. The tent was ripped, and they found pieces of hair, scalp, muscle, bone, and tissue. As the search continued, they found a piece of her lip, more tissue, and bloody clothing. Upon locating her body, they discovered that quite a lot of her body had been consumed by a bear.

They theorized that the bear had ripped the tent and pulled her out either by the side of her neck or the top of her head while she was sleeping. There didn’t appear to be a struggle, so they believe that she died quickly.

Eerily, she had written in a journal at her campsite that she had taken “all precautions” to be safe.[4] 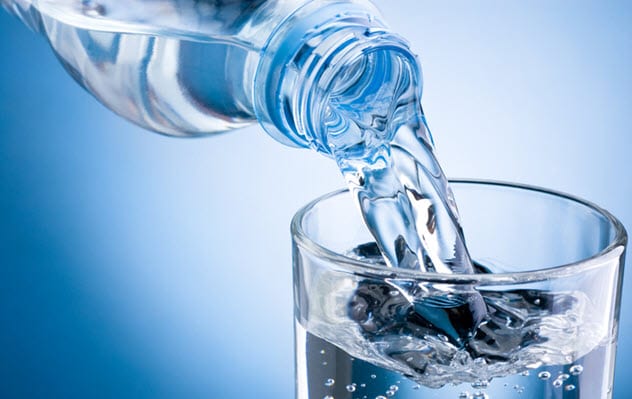 Determined to win a contest for her kids, Jennifer Strange participated in “Hold Your Wee for a Wii” at a local radio station. While it should have been a funny and lighthearted event, it inexplicably ended in disaster.

The goal was to see who could drink the most water without going to the bathroom. The victor would take home a Wii game system. Sounds simple enough, right?

After the contest, Jennifer called her office in tears to let them know that she wouldn’t be back to work and was going home with a horrible headache. Hours later, her mother discovered Jennifer dead at her home.

The coroner found that her death was likely caused by “water intoxication” or hyponatremia that is defined by the body’s sodium level falling below normal, causing the brain to swell and push against the skull. As you can imagine, this would be brutally painful and cause nausea, vomiting, and weakness. In more severe cases, it results in seizures, coma, and even death.[5] 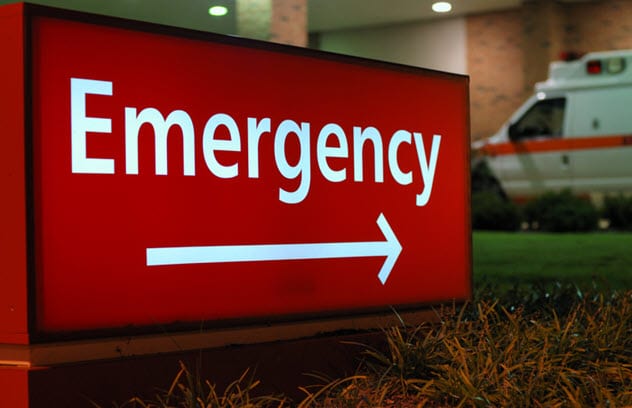 Probably one of the last things you would expect to happen at a New York Jets football game would be having a flying lawnmower crash into your head. Unfortunately for John Bowen, this oddity became a reality in 1979.

During the game’s halftime show, model plane enthusiasts were putting on a show for the crowd. It was said to have included aerial dogfights featuring planes made in “novel” shapes. This particular model plane was called the “Flying Lawnmower.” It was described as 0.61 meters (2 ft) long and made mostly from metal.

Tragically, the plane crashed into the stands, striking John Bowen and Kevin Rourke in their heads. Bowen underwent surgery on a terrible gash and later died from his injuries. Rourke suffered a concussion, but fortunately, he recovered.

Ironically, the halftime show was being put on by the Electronic Eagles of the Radio Controlled Association of Greater New York to promote the safety of the sport.[6] 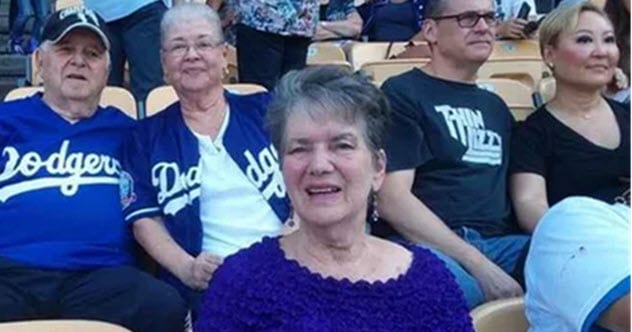 Generally speaking, you would think that baseball is less of a “contact sport” and less violent than a lot of other sports. But that is not entirely true.

There have been a large number of fatalities connected to the game over the years—whether it is a player being beaned in the head by a ball or getting hit in the chest over the heart. Some fans have also been injured or killed by falling from the stands.

In one sad story, the Goldblooms, an elderly couple who regularly attended Dodgers games, went to the stadium to simultaneously celebrate her 79th birthday and the couple’s 59th wedding anniversary. As they were enjoying the game from the stands, a ball flew just above the protective netting and tragically hit Linda Goldbloom in the head.

Ushers immediately raced to her side to see if she was okay. When she indicated that she was not, she was placed in an ambulance, where she began to vomit, and rushed to the hospital.

After undergoing emergency surgery, she was placed on a ventilator. Mrs. Goldbloom remained unresponsive for three days before she died from her injuries. She was buried about 16 kilometers (10 mi) from the stadium and team that she had loved so much.[7] 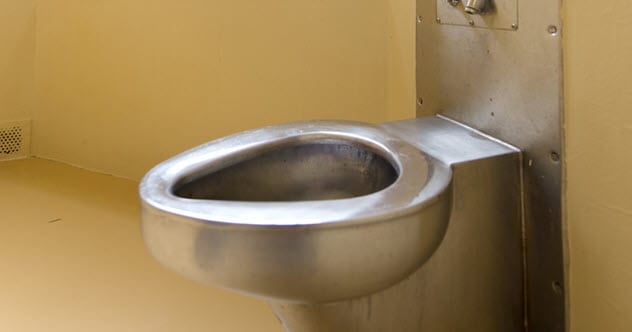 After having his death sentence overturned on appeal, he settled into his new reality as a “lifer.” As he was only 28 at the time, he would more than likely have been there for many years to come.

One fateful day, he attempted to repair a set of earphones that was connected to his television. He bit down on one of the earphone’s wires while sitting on the steel toilet in his prison cell. This turned out to be a deadly combination.

The same prisoner who initially escaped the electric chair unintentionally carried out his own death sentence by electrocution. How ironic.[8] 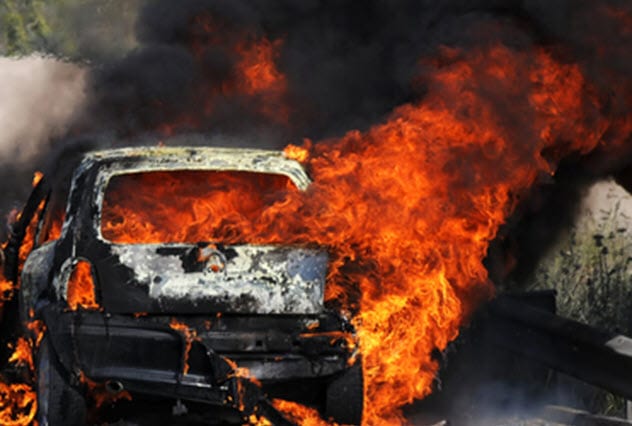 It is usually not a good idea to cross a rival motorcycle gang. Depending upon the severity of the issue, it is likely that retaliation will soon come your way. Two gang members were on their way to do just that when their carelessness cost them their lives.

Apparently, the homemade bomb that they were going to use to kill the rival gang member was stored in the car’s center console. Nobody knows exactly what happened, but the bomb exploded in transit and they were both killed.

The blast was so strong that it ripped open the roof and blew out the front doors of the car. The driver’s body was blown into the gutter of an elderly woman’s house, and debris was scattered over a 35-meter (115 ft) radius. Somehow, the other member was found slumped over and still strapped into his seat inside the vehicle.[9] 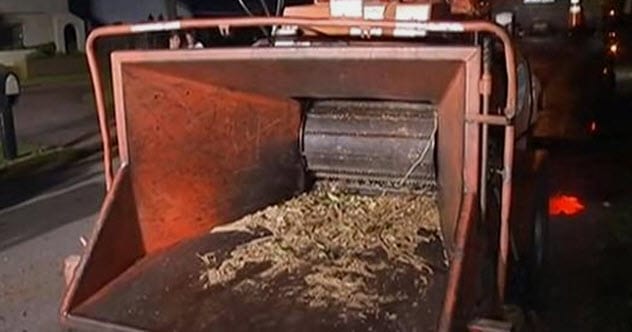 One of the most horrifying and gruesome ways to die has to be by falling into a wood chipper while fully conscious and aware of what is about to happen to you.

There have been numerous reports of this happening. Some individuals were severely injured, and some were killed. In one instance, a landscaper somehow fell into the teeth of the wood chipper that he had been using at work that day. It was reported that his entire body was pulled through, leaving a gory scene.

Rescue workers had to “delicately clean the scene” to reclaim all of the victim’s remains. As you can imagine, bearing witness to something like this would tend to stay with you forever.[10]

Read about more bizarre ways to die on 10 People Who Died Ridiculous Deaths and 10 Ways People Have Died By Getting Stuck.