10 Unusual Ways To Set Up Camp

With summer in full swing in the Northern Hemisphere, many are thinking of heading off into the great outdoors to enjoy a camping expedition. Traditionally, this will mean packing the tent and sleeping bags, finding a nice spot beside a river or in the mountains, and relaxing for a few days. A meal by the campfire with a few beers, toasted marshmallows, and tall tales will probably be enjoyed by most campers.

However, some campers look for something a little more unique and adventurous than your traditional campsite, such as swinging from a treetop, dangling from a wire over a canyon, or even curling up inside a beer can. Here are some of the more unusual places to camp around the world.

10 Sleep In A Treetop In Bavaria 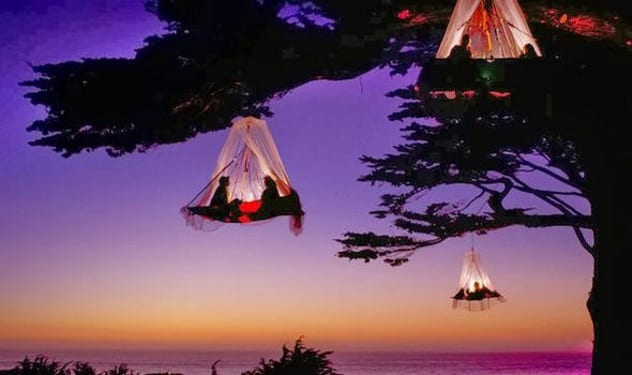 Does the thought of “creepy crawlies” slithering along the ground and into your tent at night put you off camping? Maybe camping a little higher off the ground will solve the problem. One unusual campsite in Germany could be just what you need. Your tent is suspended from a tree branch, high in the canopy of the forest.[1]

As part of an overall adventure experience at Waldseilgarten Hollschlucht, campers are taught to climb safely so that they can make the 45-minute trip to scale the trees into their beds for the night. Given the length of the climb to bed and the height of your treetop bunk, campers are allowed only a light and a book for the night.

Imagine waking up at sunrise, swinging in the trees with the birds. You may just find yourself sharing a branch with an owl or two for the night. If you find it hard to sleep swaying in the treetops, at least you will have spectacular views across the Bavarian forest.

Best pack light for this camping trip, and don’t drink too much before bed. It is a very long way down to the amenities. 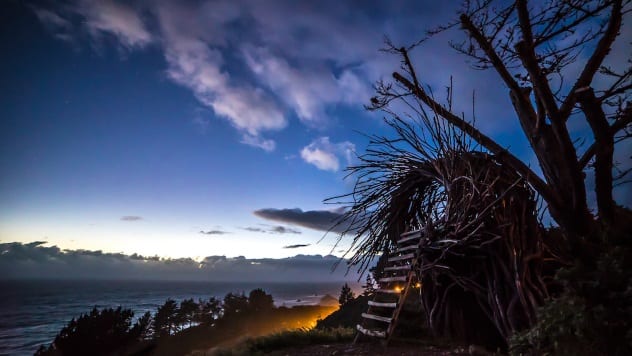 Fancy a bit of bird-watching on your camping trip? A Californian campground gives you the opportunity to camp in a human-sized bird’s nest crafted from twigs and sticks.[2]

Treebones Resort in Big Sur, California, is one of a number of campsites around the world that offer the unique experience of sleeping in an oversized bird’s nest. After climbing up into your “nest” for the night, you can sleep like a bird. However, you may also come across the odd bat, raccoon, or other wildlife during your night.

While the nests give you the opportunity to lie back and enjoy the stars through the branches, they aren’t weatherproof. So you may also need to pitch a tent and pack some wet weather gear if it does happen to rain. 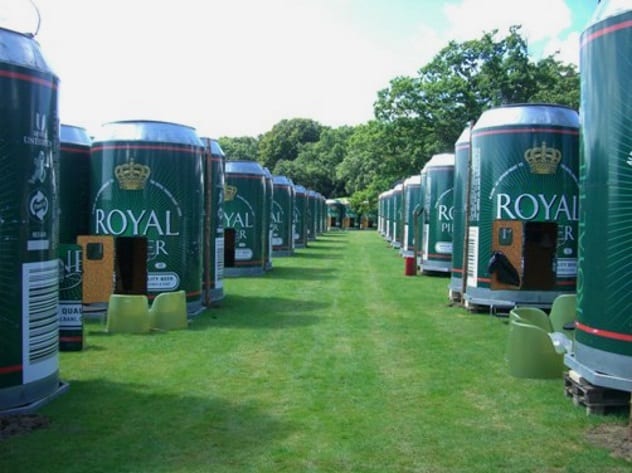 Photo credit: The World, Your Home

Enjoying a few beers around the campfire is a common camping activity. However, a Danish music festival lets you literally climb into a beer can to camp for the night.[3]

Visitors to Skanderborg for the Smukfest music festival can rent a gigantic four-meter-high (13 ft) can to camp in for the night. A local beer manufacturer sponsoring the festival created a number of giant beer cans for festival patrons to crash in after a busy day.

Once inside your oversized beer can, you have two levels, to accommodate both sleeping and partying during the festival. When you are ready for bed, simply climb the ladder to your sleep pod and pop open the skylight at the top of the can. 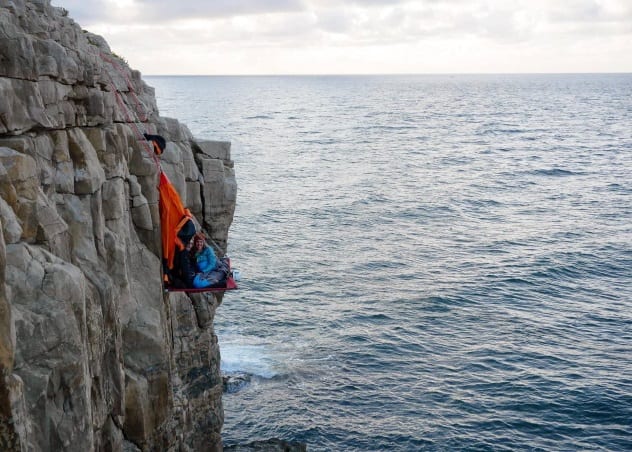 Some campers apparently don’t see solid ground beneath them as a prerequisite for a good night’s sleep. Camping suspended from a cliffside has become an increasingly popular adventure activity.

Abseilers and rock climbers originally began constructing makeshift perches for the night during their expeditions. The trend caught on, with a number of adventure camping operators around the world offering the experience of sleeping perched on the side of a cliff.

Imagine abseiling down a cliffside to a narrow bed, suspended above the sea or a canyon. Spend the night enjoying the spectacular views from your cliffside perch. Note, however, that your bed for the night is somewhat narrow and may be prone to swaying in the wind. 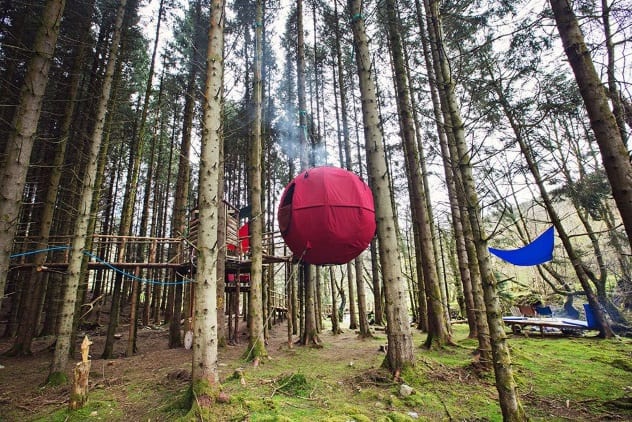 Pods suspended from trees have become a popular option around the world for those looking for a more quirky camping experience. Campers in Wales can spend the night in a huge “eco-bauble” hung from the trees. The ball-shaped “tree tents” are made from hybrid aluminum and steam-bent ash and secured among the trees with metal wires.[5]

The spherical sleeping pods contain a few more creature comforts than some other tree camping experiences. These include a futon and a wood-burning stove so that you can stay toasty and warm at night. However, as you are dangling from the branches and swinging in the breeze overnight, visits from the other forest wildlife are still a possibility.

5 Hammock On A High Wire 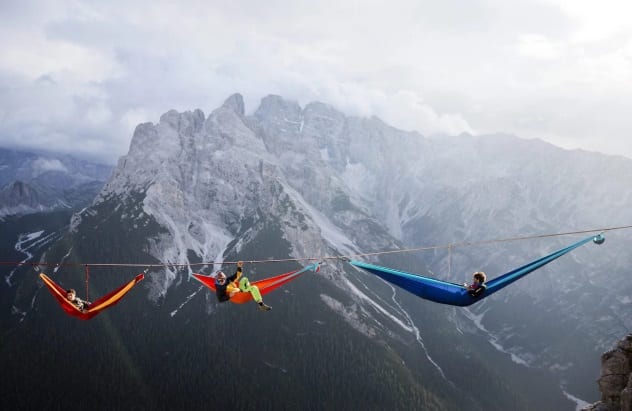 Sleeping dangling from a wire above a canyon would have to be the most extreme form of camping. A group of Italian tightrope walkers, or “slackliners,” gather each year to practice their stunts, strolling from one peak to another via a 2.5-centimeter-wide (1 in) rope.[6] By night, they simply set up their hammocks on the ropes, sleeping thousands of feet above the valley floor.

They may have unrivaled views of the Italian Alps, but the sleeping arrangements do seem to be a little precarious for most campers’ liking. Getting out of bed in the morning would also seem to be a bit of an adventure in itself. 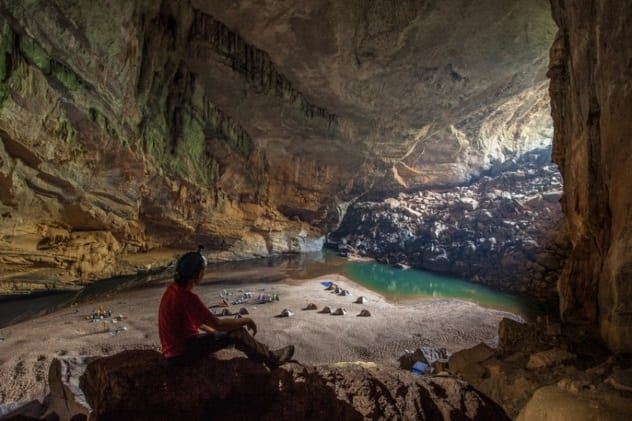 Campers in Vietnam can spend the night in Hang Son Doong (aka Son Doong Cave), the world’s largest cave.[7] The guided adventure camping experience involves a 22-kilometer (14 mi) hike through the Phong Nha-Ke Bang National Park. The trek involves river crossings as well as dodging leeches and snakes along the way.

Son Doong Cave is 9 kilometers (5.6 mi) long and reaches 200 meters (660 ft) high in the highest sections. It is so large that it creates its own climate system, including rain, clouds, and mists. Campers are guided through grottoes and limestone formations to a campsite beside an underground beach. Monkeys, bats, and flying foxes will be your camp mates for the night. 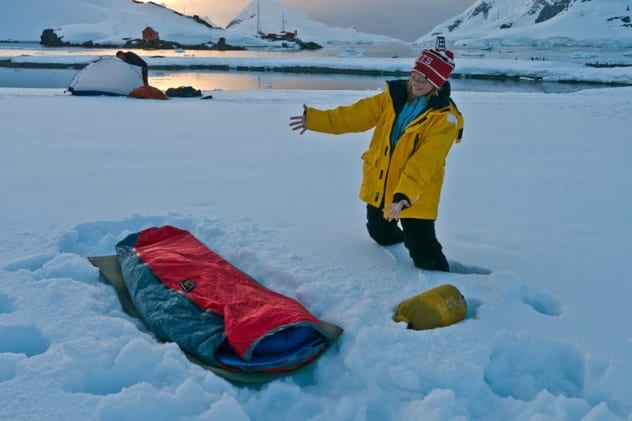 Most of us think of camping as a summertime activity. However, ice camping has become an extreme tourist attraction around the world. In the Northern Hemisphere, many countries close to the Arctic Circle offer the opportunity to camp in ice caves, glaciers, and on the ice, bears and all. As for the Southern Hemisphere, a number of Antarctic tour companies now also provide the opportunity to experience what it was like for Antarctic explorers.

A limited number of campers on cruise expeditions are taken ashore to set up camp under the Antarctic stars for the night. After digging a small trench to bed down in, you can spend a chilly night with nothing but your sleeping bag and a bivouac to protect you from the icy wind.

If the thought of sleeping on the ice isn’t bad enough, you are not permitted to take any food or drink ashore, and you’re only allowed to use the disposable toilet if it’s an emergency.


2 Camping In The Sahara Desert 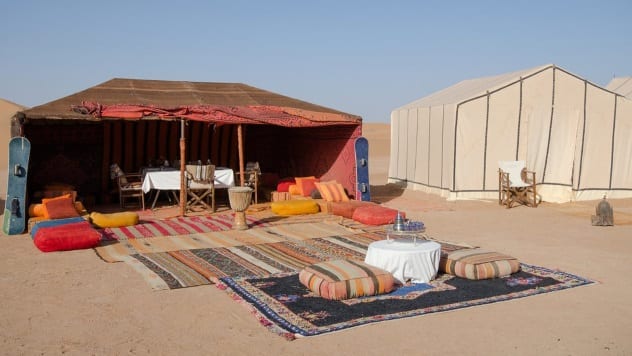 For the ultimate in camping seclusion, you could try a remote campsite in the dunes of the Sahara Desert, as long as you’re prepared to brave the sandstorms, wind, and dung beetles overnight. A number of tour operators in Algeria and Morocco offer safaris, taking you by four-wheel drive, dune buggy, or a rather slow camel train, Lawrence of Arabia-style, to your campsite for the night.

This expedition is best undertaken with an experienced tour guide, to avoid getting lost in the sand dunes. You can choose from a basic tent with a thin sleeping mat set in the shifting sands or a more luxury “glamping” site with a bed and shower. Campers enjoy dinner on cushions around the campfire.[9] 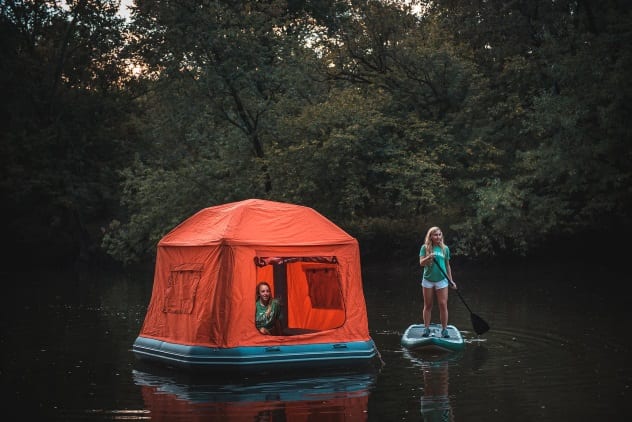 Boating enthusiasts have long enjoyed the lulling effect of the waves as they sleep safely tucked in their cabin for the night. However, the growing popularity of “floating tents” and “raft camping” certainly takes the concept of a night on the water to a more basic level.

In Belgium, rafting enthusiasts can tie up to a 12-square-meter (129 ft2) raft in which to camp for the night. The raft is little more than a floating tent, though it does provide some level of shelter for the night as you float among the reeds. A US company has recently developed a blow-up raft with a built-in tent which will allow campers to set up camp on any lake or pond, without the expense of a traditional boat.[10]

Read about some more unique travel practices and destinations on 10 Bizarre Things People Rent While Traveling and 10 Australian Tourist Attractions That Started Out As A Joke.