Slavery is one of the most controversial topics out there today. Although we all agree it was terrible, we probably never learned enough about it in school. Slavery was much more complicated than we think, and contrary to what most people believe, it was not all about blacks. Whites were also kept as slaves.

Nevertheless, slavers did all they could to justify the practice, including creating a dedicated Slave Bible. That did not stop the slaves from running away, though. However, the daring escapes often ended after the slaves were tracked and attacked by dogs bred only for that purpose. 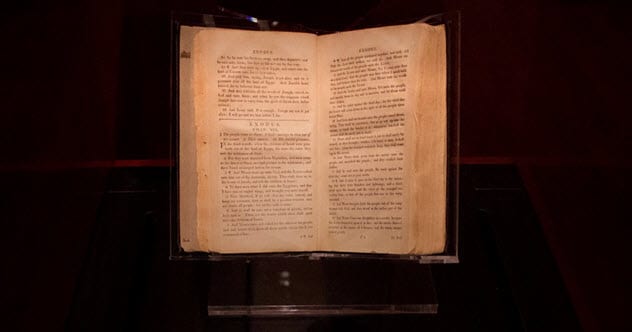 Some masters educated their slaves and converted them to Christianity. However, they could not allow them to read the Bible because it contained several passages that countered slavery. Slavers found a way around this by removing most chapters of the Old Testament and a huge chunk of the New Testament.

The result was a stripped-down Bible that they called “Parts of the Holy Bible, selected for the use of the Negro Slaves, in the British West-India Islands,” or as we say nowadays, the Slave Bible. The masters cleverly left portions of the Bible that made slavery seem normal—like the part where Joseph was kept as a slave in Egypt.

However, they removed other portions, such as where the Israelites fled from their oppressors in Egypt, which the white slavers feared could encourage the slaves to rebel. In fact, slaves in Haiti had rebelled against their white masters and chased them out of Haiti three years before the first Slave Bible was issued.[1]

The creator of the Slave Bible remains unknown. Some sources indicate that the book could be the handiwork of the white plantation owners who used it to discourage their slaves from revolting. Others think it was the white missionaries who wanted to teach the slaves only the chapters that supported slavery, just so they could think that their situation was normal. 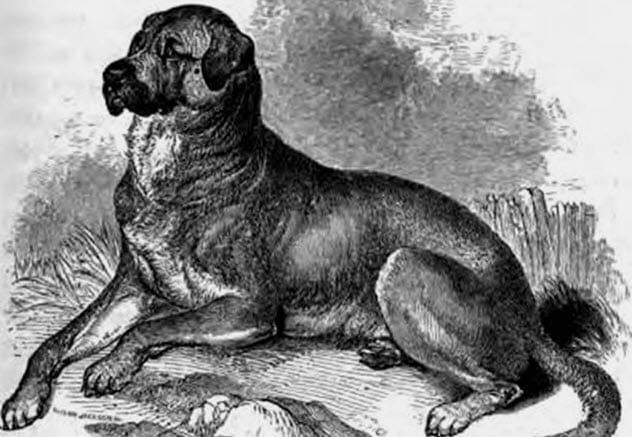 “Negro dogs” were strong and aggressive breeds like bloodhounds and bulldogs which could tear a man to pieces. In fact, slavers often allowed the dogs to viciously maul captured runaway slaves. However, they quickly subdued the dog before it killed the slave.

One infamous Negro dog was the Dogo Cubano (aka the Mastin Cubano, Cuban Mastiff, or Mastin de Cuba). The dog was bred by crossing a Spanish war dog with the English mastiff and scent hound. The animal was engineered to catch runaway slaves, although it also guarded livestock and engaged in dogfighting. Unsurprisingly, the dog went extinct after slavery was abolished in Cuba.[2]

Negro dogs were trained with real slaves. They never saw a black slave until they were required to pursue him during training. The dogs followed the scent of the slave after picking up the individual’s distinctive smell from some clothing items. Then they went after the slave and aggressively attacked him. Successful dogs were rewarded with chunks of meat.


8 The First Slave Owner Was A Black Man 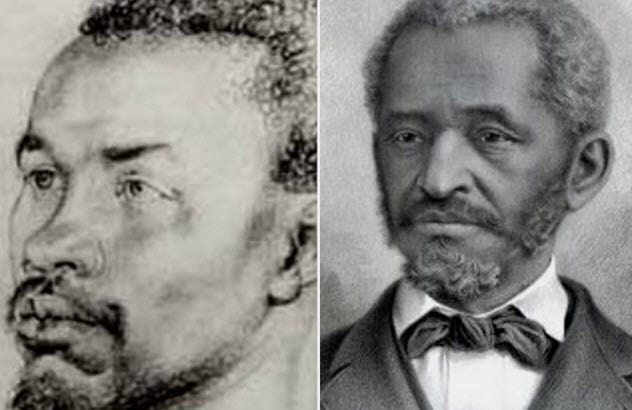 We were taught that slavery began in the US when the first 20 slaves arrived in Virginia in 1620. That is only partly true because these individuals were not really slaves. They were indentured servants—that is, people required to serve a master for a few years before regaining their freedom.

One of their servants was a man called John Casor. In 1654 or 1655, Casor and Anthony Johnson ended up in a Virginia court due to a disagreement over Casor’s indentured servitude. Casor claimed that his term was over because he had completed the agreed-upon seven or eight years plus another seven years. Anthony insisted that Casor was still his indentured servant.

The court determined that Anthony could hold Casor in lifelong servitude, which effectively made him a slave. White owners of indentured servants soon approached the courts with similar claims and were able to convert their indentured servants into lifetime slaves. In 1661, several years after the judgment in Casor and Anthony’s case, Virginia officially legalized slavery.

To be clear, the Virginia courts had condemned one John Punch into lifetime servitude a few years before Casor was declared a slave. Punch and some white servants were charged with escaping from their masters without completing their contracts. Only Punch (a black) was punished with lifetime servitude.[3]

7 Whites Were Also Kept As Slaves 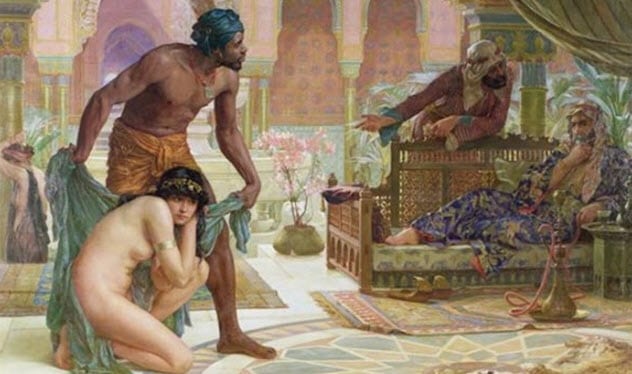 When we talk about slavery, we often think of transatlantic slavery—that is, the slaves who were transported from Africa to the US on ships traveling over the Atlantic Ocean. But that was just one form of slavery. Other kinds took place elsewhere and included whites as victims.

One form of slavery was run by the Barbary corsairs, the infamous slave raiders of the Ottoman Empire who lived along the coasts of today’s North African countries around AD 1600. The Barbary corsairs were often Muslims, although they also included English and Dutch pirates.

Unlike the transatlantic slave trade, the Barbary corsairs did not discriminate against their victims. They raided anyone, including fellow Muslims. The men were kept as slaves, while the women were sold as concubines. The male children were forcefully converted to Islam and eventually conscripted into the slave corps of the Ottoman army.

The Barbary corsairs started off by capturing passengers traveling on ships in the Mediterranean. They later switched to raiding coastal villages in England, France, Italy, Ireland, Spain, and Portugal. In 1631, they captured the entire population of Baltimore in Ireland as slaves. The raids became so frequent that many European coastal townspeople fled inland to escape the pirates.[4]

The Barbary slave trade slowed down in the 17th century when the European navies started to attack the Barbary pirates on the high seas. By the 19th century, the US and European navies were already striking the pirates right in their territory. This forced them to stop enslaving European Christians, although they continued to raid other territories.


6 Slave Owners Bred Slaves And Used Them As Currency 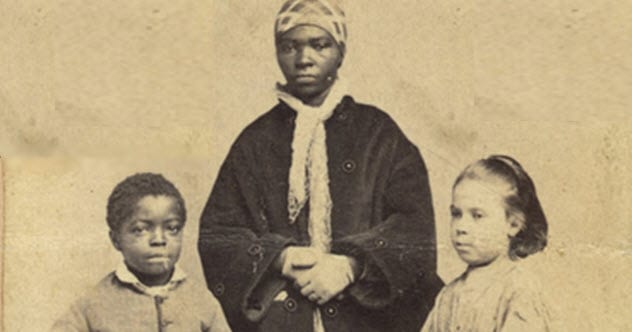 The 1808 proscription of the transatlantic slave trade was supposed to be a win for the black slaves and the antislavery movement in the US. However, if anything, it was a win for the proslavery movement. Before the act, slavers depended on individuals captured or purchased from Africa. After the ban, they turned to slaves bred in the US.

Slave breeding was the act of encouraging slaves to give birth to as many children as possible. Many slavers maintained breeding farms where they kept a few male slaves with many female slaves. Their offspring became slaves at birth and remained on the farms until they were old enough to work.

Slave breeding became the mainstay of states like Virginia, which quickly became a top exporter of slaves to other colonies. Slaves were the state’s major product at the time. They quickly became a sort of currency and were more valuable than gold. In 1860, slaves in the US were valued at a total of $4 billion.

For comparison, all currency in the US was worth $435.4 million at that time, while all circulating gold and silver was valued at $228.3 million. Some slavers also mortgaged their slaves and then formed banks that converted the mortgages to bonds that were sold across the world—even in regions where slavery was illegal.[5]

5 Fleeing From A Master Was Considered A Mental Disorder 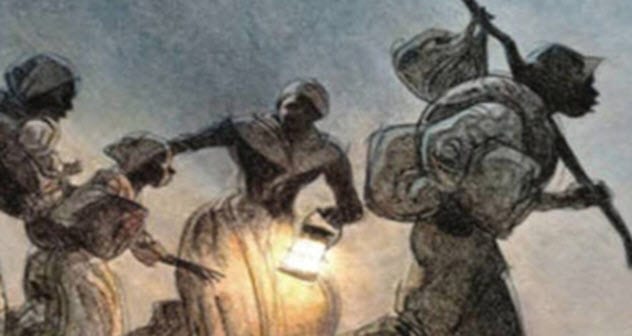 Samuel Cartwright was a medical doctor in the proslavery South. He supported slavery and even used medicine and science to justify it. In 1849, he was appointed the leader of a Louisiana state committee tasked with documenting the diseases of African-Americans.

Cartwright submitted his report, which was titled “Diseases and Physical Peculiarities of the Negro Race.” He claimed that blacks were inferior to whites. According to Cartwright, blacks had small brains, immature nervous systems, and sensitive skins, all of which made them good slaves. He added that a black would never be happy unless he was a slave.

Cartwright added that slaves sometimes got afflicted with drapetomania, a mental disorder that made them flee from their masters. Drapetomania was formed from the Greek words for “crazy” and “runaway slave.” The disorder was supposedly caused by masters who treated their slaves like humans.

Cartwright wrote that slaves planning to run away often got “sulky and dissatisfied without reason.” However, they and captured runaway slaves could be cured by “whipping the devil out of them” and amputating their toes.[6] 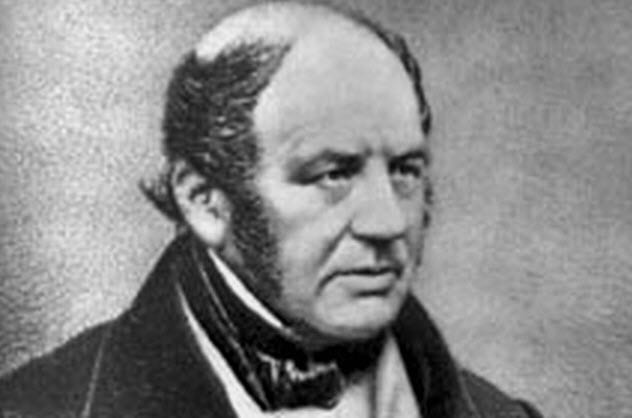 Cartwright claimed that dysaesthesia aethiopica affected more free blacks than slaves because the free blacks didn’t have masters to care for them. However, he added that this illness could be cured by washing the desensitized skin with soap and water. Then the skin was cleaned in oil before the slave was made to work under the sun. Cartwright added that the slave would be very grateful.[7] 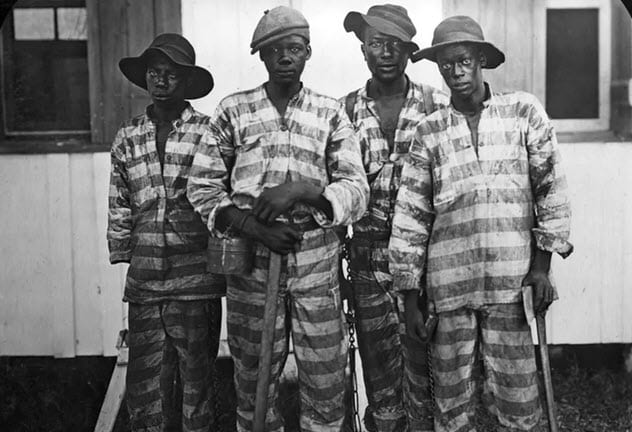 Slavery was completely illegal at the end of the US Civil War. This became a problem for the South, which quickly became unstable because its economy depended on slavery. Former slavers found solace in the Thirteenth Amendment—the same one that abolished slavery. The law permitted slavery and involuntary servitude as “a punishment for crime.”

Southern states started to arrest blacks indiscriminately. Many were even arrested for the unbelievable crime of being unemployed. The “crime” was punishable with a huge fine, which the blacks could not pay because they were unemployed. So they were imprisoned and leased to private businesses, which used them for manual labor. This was the convict-lease system.

Over 200,000 blacks became victims of the convict-lease system. Conditions were terrible, just as they were at the time of slavery. The leased convicts did dangerous jobs under inhumane conditions. They were also whipped, chained, and stabbed. Blacks quickly became so infamous as convicts that the words “convicts” and “negroes” were considered synonyms at the time.[8]


2 Freed Blacks Were Kidnapped And Resold Into Slavery 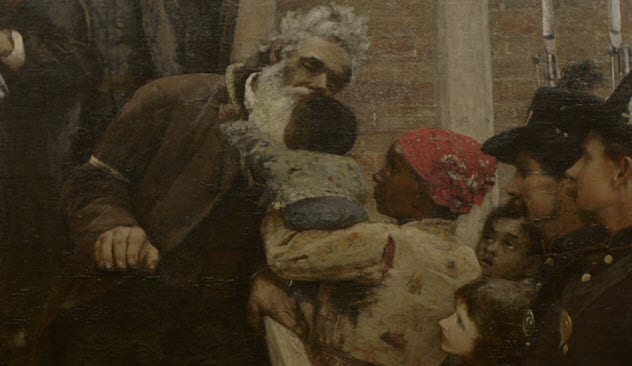 The Underground Railroad appeared several years before the Civil War. It was a network of homes and hideouts run by free blacks and white anti-slavers to help runaway slaves escape from the proslavery South to the antislavery North.

Other free blacks could not testify that a fellow black was a free man because the law forbade blacks to testify against whites in courts. Only a white could prove that a black was a free man. However, many whites would not participate because they would be hated for helping a black man and sending a white man to prison. 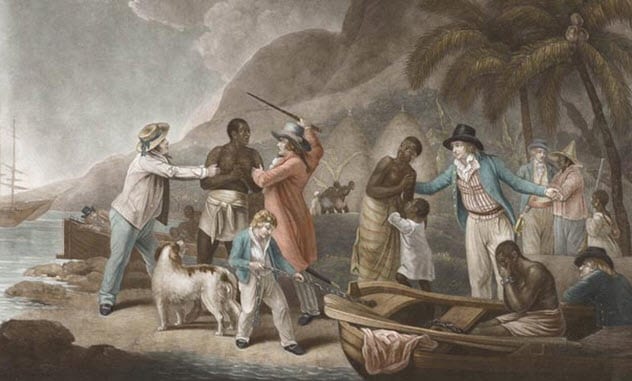 Africans sold other Africans into slavery. The slave ships traveling to Africa had to get their slaves from somewhere. Most traveled to the coasts of Africa where they purchased slaves from native tribes living in the area. The slaves were often prisoners of war captured after raids on rival tribes.

The African kings on the coast traded slaves for European weapons, which allowed the kings to move further inland. There, they captured new territories and slaves, which they also exchanged for weapons. And the deadly cycle continued. The slave trade was the reason why many West African tribes engaged in a series of deadly wars a few centuries ago.

When African trade with the Europeans started in the 16th century, it didn’t involve slaves. At first, African rulers only traded ivory and gold for European goods. However, they soon started trading in slaves.[10]

Read more little-known stories about slavery on 10 Little-Known Stories About How Slavery Ended Around The World and 10 Ways American Slavery Continued Long After The Civil War.