Humanity has amassed an enormous amount of information about our universe and how it works. We pride ourselves in being the most intelligent species on Earth, and so far, the most capable kind in all of the universe.

However, the information we have about the structure of our universe is derived from the mere 4 percent that we can observe, measure, and analyze—regular, ordinary matter. The remaining 96 percent is “dark” stuff. It is dark because we know nothing of it (and because physicists tend to lack creativity in the naming department).

Of that 96 percent, roughly 68 percent is dark energy. This makes it the largest component of the universe, and right now, the most mysterious. Thousands of scientists around the world are working to decipher this mysterious energy that seems to guide how our universe creates large structures.

Without dark energy, our universe would eventually end up in a “Big Crunch”—a gravity-dominated fate where the universe rapidly collapses into itself. So, although we don’t know what dark energy is, we should be thankful that it’s there.

Here are the top 10 theories of what dark energy could be and what each scenario can tell us about the fate of our universe.

10 It Is A Property Of Space 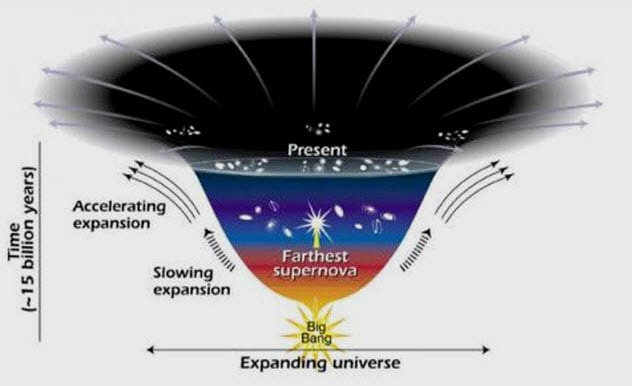 This theory is derived from Einstein’s theory of gravitation, specifically from the fact that “empty space” can have its own energy—dubbed “the cosmological constant.” Einstein also believed that space could come into existence from nothing, and as more space is created, more energy can consequently be held within it.[1]

This would explain the rapid expansion of the universe we observe. This sort of universe would continue expanding forever until every object in the universe was so far away from every other object that everything would end in cold darkness. 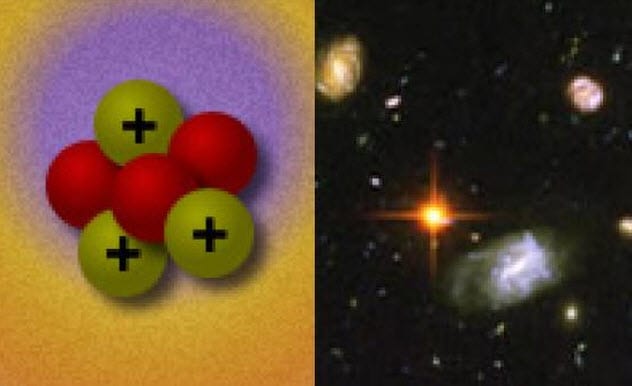 A lot of astronomers believe the search for dark energy is futile. Instead, they lecture that finding the elusive “theory of everything” (not the Stephen Hawking movie) would naturally solve the problem of dark energy.

Although solving the problem of dark energy this way is logically sound, finding this theory has proven impossible for even the brightest minds in physics. Normal laws of physics seem to “break down” when one reaches the quantum level.[2] But alas, the search goes on.

8 It Creates A New Fundamental Force 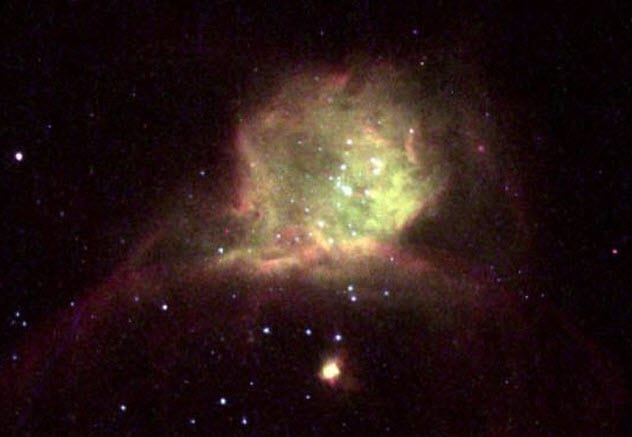 The fundamental forces we know of (gravity, electromagnetism, weak force, and strong force) all act within different ranges. Some affect only atomic-sized objects, while others cause the motions of planets and instigate the formation of galaxies.

This theory of dark energy states that that there is a fundamental force we still have not found that acts on enormous scales and can only be observed when the universe reaches a certain size. It would work to oppose gravity and thus pull objects in the universe away from each other.[3]

Scientists argue that because this force acts on such a large scale, we have not yet encountered it in our everyday lives and measurements made on Earth cannot be affected by it. No one really knows if this force would be temporary or permanent. Yet, depending on this, the universe would either expand forever and turn cold or expand and contract periodically for the rest of time.

7 Einstein’s Theory of Gravity Is Wrong 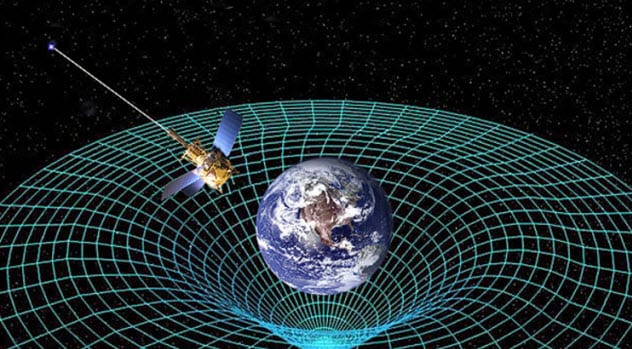 Try telling one of the smartest physicists who ever lived that his (arguably) most famous theory is wrong . . . yikes. Einstein’s theory of relativity states that every body in the universe is attracted to every other body, with the strength of that attraction depending solely on the masses of the objects and the distance between their centers.

However, some physicists have argued that this theory might be incorrect and have been developing new theories of gravity to explain dark energy. In these theories, they reverse the effects of gravity on large scales so that objects repel each other.[4]

Although these theories do not have much experimental backing (since Einstein’s model of gravity has worked pretty well for us this far), they would explain why the universe is expanding. With these new models of gravitation, our universe would again reach a state of cold darkness after a state of rapid expansion. 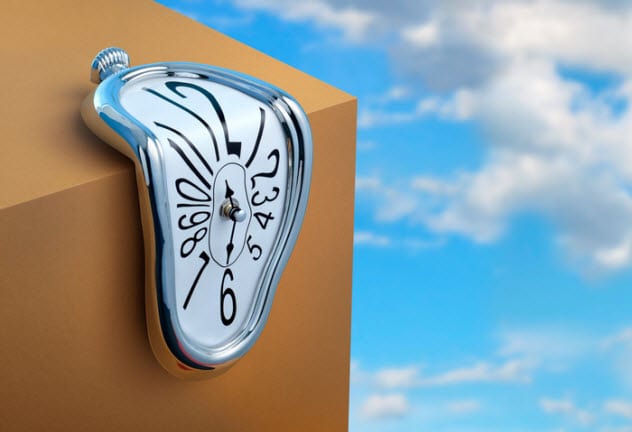 If you have ever seen the movie Interstellar, you have probably heard of time dilation. It is a phenomenon that occurs when objects moving close to the speed of light experience a slowing of time.

This is the same idea presented in the twin paradox, where one twin boards a spaceship that moves close to the speed of light while his brother remains on Earth. When they meet again after years of separation, the twin on Earth is significantly older than his astronaut brother.

A recent paper by Edward Kipreos, a professor at the University of Georgia, argues that only the moving object itself undergoes time dilation.[5] (Usually, the person observing the fast-moving object also experiences the effects.)

This would mean that the passage of time was faster in the past. This eliminates the need to have a repulsive force or substance since the apparent expansion of the universe would be a mere miscalculation of distances that have been affected by time dilation.

If this theory is true, it would not only contradict another one of Einstein’s famous theories (his theory of special relativity) but it would also imply that our universe would continue to expand due to the effects of the Hubble Constant. 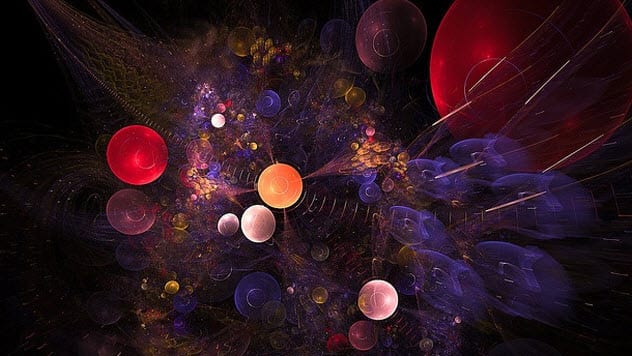 The idea of particles and fields has been around for centuries now. We know that an electron creates an electric field, and recently, the gravitational field has been associated with the “graviton”—gravity’s “force particle.” Particle physicists and theorists are comfortable with the idea that the energy of a particular field must be transmitted by its force particle instead of by the field itself.

This concept can be translated to dark energy, with dark matter (the other 27 percent of the universe) being its force particle.[6] This idea seems plausible, especially because some force particles are unobservable, like the graviton. However, there is little evidence supporting this theory because we have not found a way to measure any of the properties associated with dark energy or dark matter thus far. 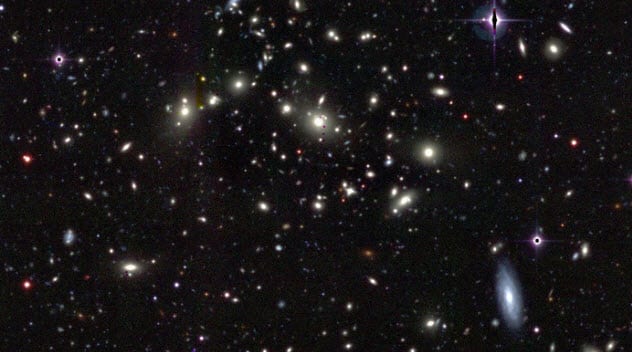 f(R) theories are models of the current curvature of the universe (with curvature denoted as R). In 2007, researchers from the University of Chicago showed that, with a specific value of R, a model of the universe is created in which dark energy is not needed to explain the expansion of the universe.

This type of universe contorts itself in a way that minimizes its overall curvature while producing an extra gravity-like force that can either attract or repel objects, depending on a set of conditions.[7]

The University of Chicago theorists agree that for this theory to hold, the extra force has to disappear where gravity is relatively strong (for example, on the scale of planets and galaxies) and appear only on the largest of scales. A team of astronomers at Peking University have begun to take measurements of clusters to see if this f(R) theory could be a correct description of our universe.

3 Multiverses And The Anthropic Principle 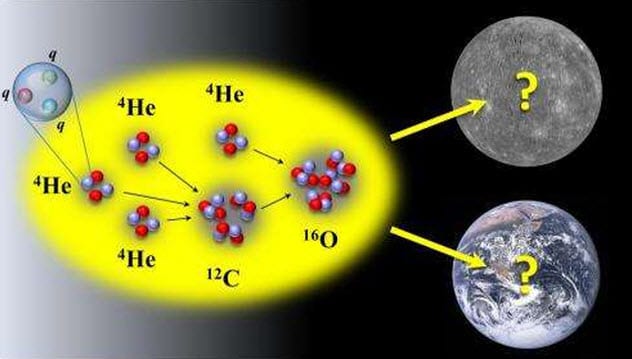 One of the greatest failures of modern physics is the prediction of the actual value of dark energy. Quantum theory predicts a very small number, but physicists calculated a number over 10120 times larger! (This measured value of dark energy is the cosmological constant—the same one from item 10 on this list.)

This is where the anthropic principle[8] comes in—the idea that fundamental constants of physics and chemistry (such as the speed of light, the gravitational constant, etc.) are “just right” to support life in our particular universe but may have different values in other universes. In an infinite set of parallel universes, it does not seem improbable that our universe just happens to be the one with the correct value of dark energy to allow for the formation of life. 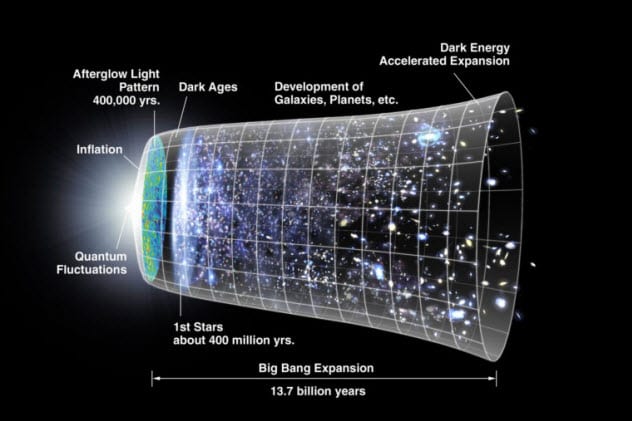 Quantum mechanics is weird. It allows for things to pop in and out of existence, shattering every concept we learn in high school physics. (“Matter cannot be created or destroyed,” we mumbled.)

This theory uses the idea of virtual particles—small bits of matter that appear only for small instances and then disappear. This constant appearance and disappearance of particles releases energy because matter is converted into energy when these particles disappear.

Physicists believe this is how space itself can attain enough continuous energy to create a “negative pressure” that causes the expansion of the universe. If this theory is true, the energy space gains from these virtual particles could be the mysterious dark energy and our universe would continue to expand for as long as this process occurs.[9] 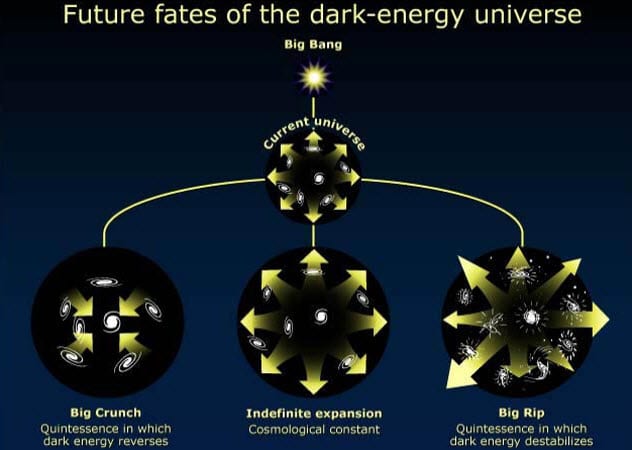 The number of theories on this list shows how far we are from understanding two-thirds of our universe. So far, each theory has had huge implications for the fate of the universe or for poor Einstein.

Deciphering dark energy could open doors for an entirely new branch of physics or could radically change existing ones. That is why so many physicists and astronomers today are questioning this large, mysterious, “dark stuff” that guides the evolution of our universe.

This last theory of dark energy is, by far, the strangest. A universe dominated by “quintessence” is one full of an “energy fluid.”[10] Other physicists like calling this energy “phantom energy.”

The idea behind it is that quintessence varies with time and location and that its energy density increases over time. This universe would meet a violent fate that physicists call a “Big Rip” (again, with the very literal naming), in which the universe would literally explode as atoms cannot keep up with how fast they are being pulled apart and stretched.

Everything in and out of sight would be obliterated. The universe would go out with a bang.

Paulina is a full-time physics student and research fellow at the University of Pennsylvania. She is currently working on DES: The Dark Energy Survey.

Read more about intriguing space mysteries on 10 Solar System Mysteries That Baffle Our Best Scientists and 10 Ways Dark Matter Could Explain The Universe.