As Jeff Goldblum would say, “Life . . . uh . . . finds a way.” Wherever we look, it seems that some species or other has adapted to live there. Each time we find an extreme or unexpected location that some life-form calls home, we uncover more about the possibilities of life throughout the universe. If it’s anything like life on Earth, it may be pretty weird. Here are ten amazing places life has been found. 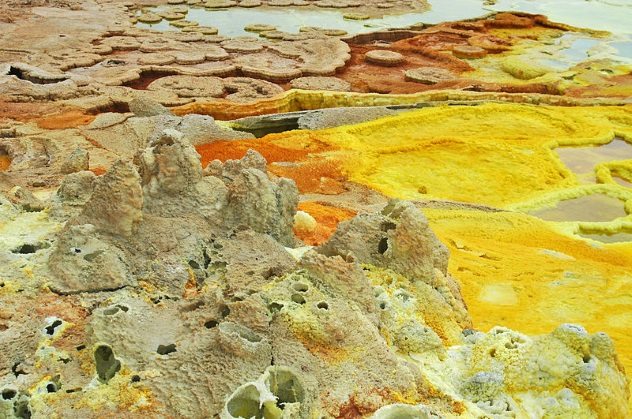 Species that can survive outside of the cozy warmth that humans enjoy are called extremophiles, and we’ll meet many on this list. Each extremophile often has one hardship that it is particularly good at enduring. Those which do not blink at dipping in corrosive acids are called acidophiles.

Highly acidic places are generally bad news for life. Acids attack organic molecules and break them down. Dissolving tends to be deleterious to health. Acidophile bacteria do their best to keep the acids in their environments outside of their cells, where they can do little harm. To do this, they actively pump out protons, the basis for acidic reactions, and secrete stable sugars to make a protective coat around their membranes.

Danakil in Ethiopia is one of the most inhospitable places on the planet. Air temperatures can reach 55 degrees Celsius (131 °F), and there are pools of boiling water that have a pH of 0, incredibly acidic.[1] In one pond of salty, hot, and acidic water, a team of researchers isolated bacteria happily thriving in the hellish landscape. 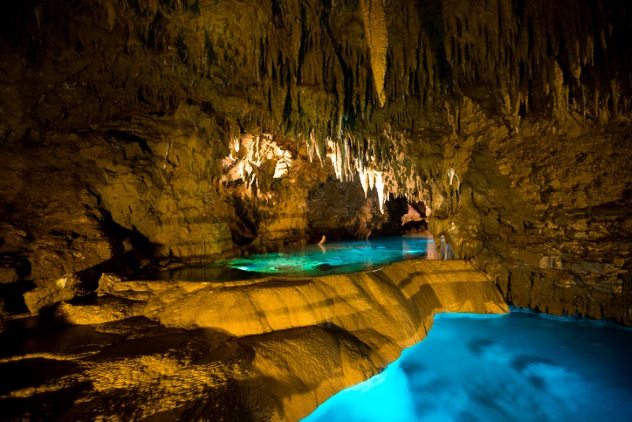 Caves can be great places for life to find shelter from the elements. Many species retreat to caves at certain times in their life cycle for warmth and safety. Some species look around their temporary home and wonder why exactly they should leave. Over many generations, they become adapted to their dark, underground life. Animals which have evolved to live in caves are called troglobites.[2]

Lots of species which evolve in caves share similar adaptations. In general, pigments in skin and shells help to protect creatures from the rays of the Sun, something troglobites do not have to worry about, just like the need for camouflage. Because of this, many cave dwellers are an eerie white. Because sight in the dark is an unnecessary sense, many species have only vestigial eyes, which do not function, or have even lost their eyes altogether. Fish, insects, crustaceans, and others have all made this transition to living in the gloom.

Such adaptations can be made relatively quickly in evolutionary terms. The first cave fish documented in Europe had only been living in caves for no more than 20,000 years. Yet it already had many of the classical features of a troglobite. Its skin is pale, its eyes are shrunken, and its other senses have increased to find prey in the dark. 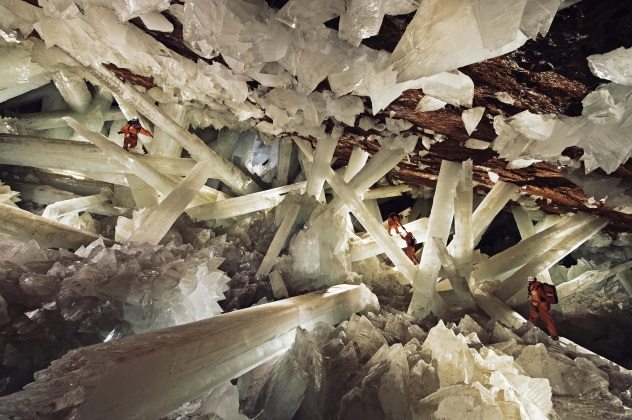 At the Naica Mine in Mexico, the hunt for lead and silver turned up something much more interesting. Pumping water out of a cavern revealed a system of crystals up to 12 meters (39 ft) long and weighing many tons. Before you book tickets to this natural wonder, you should know that it is unwelcoming to humans. Temperatures reach 50 degrees Celsius (122 °F) and 90 percent humidity. To work in this environment, researchers must wear protective suits and can only stay in the chamber for half an hour at a time.

As the crystals grew in the cave, they trapped bubbles of liquid. Along with the liquid, they also entombed microbes. Researchers estimated that the water had been cut off for between 10,000 and 50,000 years. Despite this, they were able to get the microbes trapped in the crystal to grow in the lab after all that time.[3] The bacteria were unlike any that had previously been observed.

Although the bacteria were not active in their crystal prisons, their ability to survive for such a length of time means that there may be other ancient life-forms waiting to be revived by inquisitive scientists. 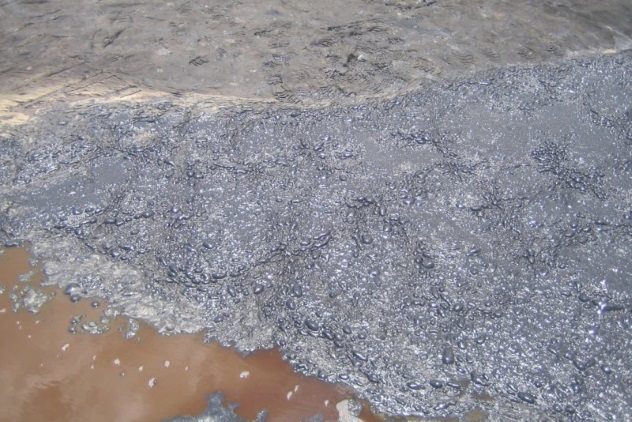 Bacteria are deceptively simple organisms. Single cells with a relatively small number of genes, they seem like they should be uninteresting. Their simplicity is their secret weapon. Able to reproduce quickly and adapt to challenging new conditions, they are found almost everywhere on Earth. When oil companies drill into petroleum reservoirs, they introduce bacteria, and very quickly, you get bacterial colonies living off the valuable hydrocarbons. This can be harmful to business when the bacteria introduce sulfur to the oil, creating “soured crude oil,” which has to be purified before it can be sold.[4]

Pitch Lake in Trinidad is an open pool of bubbling asphalt. Its black ooze seems an unlikely place for life, as it is filled with toxic hydrocarbons and has relatively little water. Pitch Lake is swimming in microbes, though. The microbes survive in minuscule droplets of water mixed in with the vast amounts of oil. Studies have found they eat the hydrocarbons and respire without the need for oxygen. 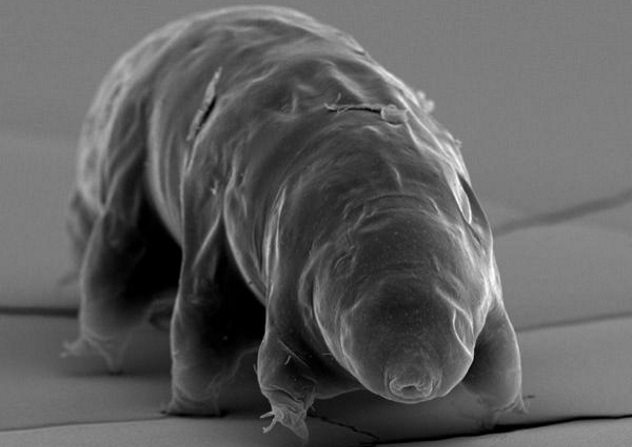 No, we haven’t found alien life yet. But some life on Earth is so weird that it looks alien. Tardigrades are tiny creatures that would be very easy to overlook if they didn’t have one amazing talent: These “water bears” are able to hibernate in a way which makes them almost indestructible. When the water in their habitat dries up, tardigrades curl up, expel water from their own body, and become a tiny, dried ball called a tun. As soon as the tun is returned to water, the tardigrade rehydrates and springs to life. While in the tun form, the tardigrade can survive being frozen to near absolute zero, heated to 150 degrees Celsius (302 °F), crushed, exposed to vacuum, and blasted with radiation.

To see just how tough tardigrades are, some (possibly sadistic) scientists attached the creatures to a satellite and blasted them into space. For ten days, the tardigrades were exposed to the vacuum of space and the particles and rays found beyond the atmosphere.[5] While the harsh conditions did kill most of even this hardy species, once returned to Earth and given water, many of the tardigrades were revived, none the worse for their jaunt into outer space. 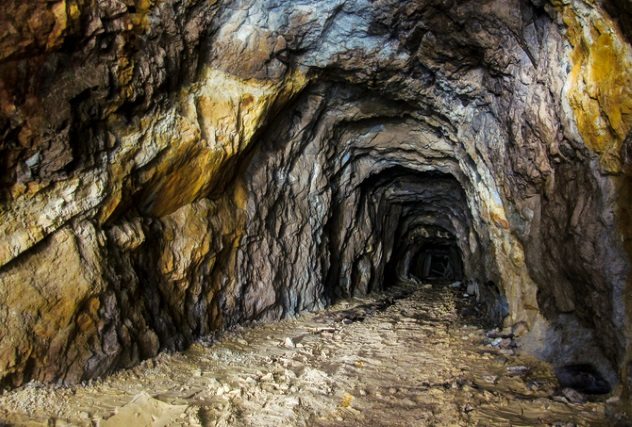 By studying the ratios of carbon isotopes in rocks, it is possible to tell whether it came from inorganic or organic sources. When researchers looked at samples of the mineral aragonite, they found that it had probably been made deep within the Earth by bacteria that were pulled down when two tectonic plates collided. The bacteria continued to live and produce methane under ever the greater pressures and temperatures beneath the ground. The methane was then incorporated into the aragonite.

We are taught in school that the Sun is the source of energy for all life on Earth, but recent findings indicate that this may not be true. In a South African gold mine, 2.8 kilometers (1.7 mi) below the ground, researchers found bacteria. The bacteria seem to survive on energy derived from radioactive decay. They use the hydrogen gas released from water by the breakdown of uranium to power their metabolism.[6] 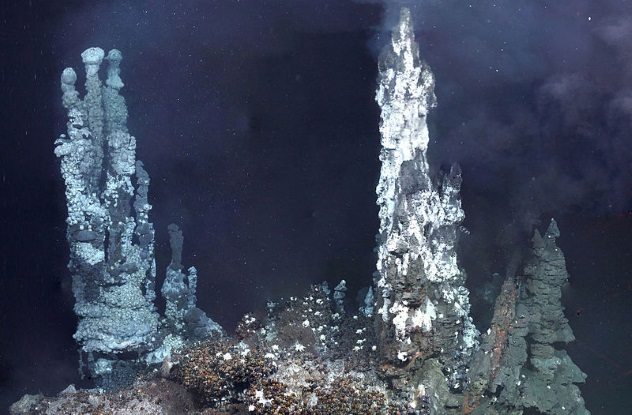 Geothermal springs often have complex microbial ecosystems living in them, all of which thrive in temperatures which would kill most organisms. On the Earth’s surface, liquid water can’t exist above 100 degrees Celsius, as it boils. The pressure beneath the ocean, however, allows water to be superheated. Superhot water spurts from deep in the Earth at sites called hydrothermal vents. These vents are oases of life around which bacteria and animals gather in the warmth. Most avoid the hottest parts of the water, but Methanopyrus kandleri can live and reproduce at 122 degrees Celsius (252 °F).[7] It does this by having tightly coiled proteins which do not unfold at high temperature.

3 In The Dead Sea 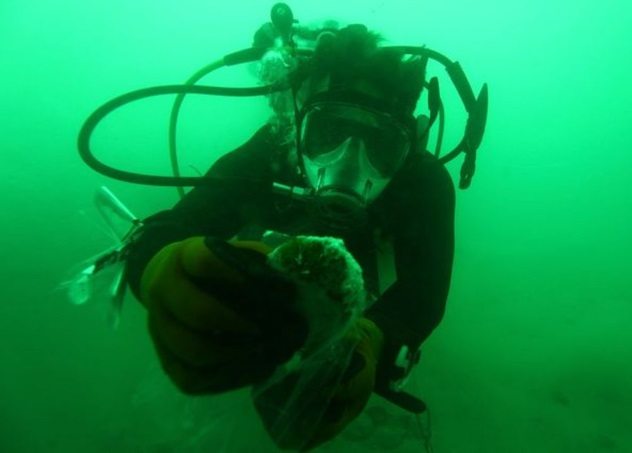 When searching for life, places with the word “dead” in their name probably rank fairly low on the list. The Dead Sea is famously dead due to the high levels of salt in its waters. Life needs salts, but mostly within a fairly narrow range of concentrations. Too high or too low, and the metabolism of the cell breaks down. Microbes that can survive high salt levels are called halophiles. High salt levels would suck the water out of most cells, but halophiles are able to resist this.

At the bottom of the Dead Sea, there are fissures which allow fresh water to seep into the salty water above. Around these patches of water grow microbial mats.[8] Most organisms are adapted to either fresh water or salt water. Here, the microbes are exposed to both high and low salt concentrations.

2 In The Upper Atmosphere 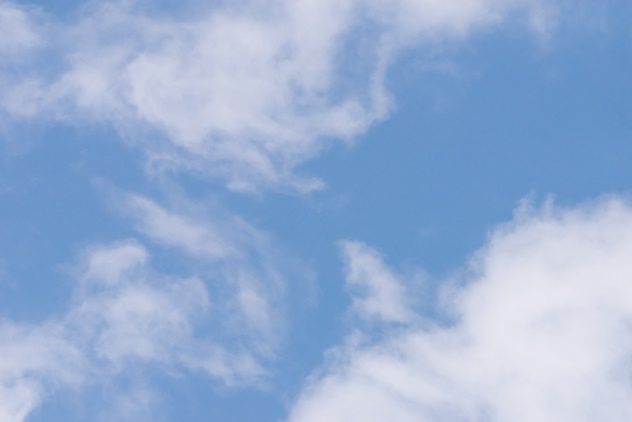 The atmosphere is a wonderful thing. As well as being the air we breathe, it also provides protection from UV rays and other radiation. The higher you, go the weaker this protection gets. Life, therefore, prefers to live snugly at the bottom of the atmosphere. Unless that life is certain species of microbes.

NASA flew a jet at 10,000 meters (33,000 ft), higher than Mount Everest, and filtered particles from the air. Up in the cold and thin atmosphere, they found that 20 percent of what they captured was living cells. This study found E. coli, a sometimes pathogenic bacterium, in the upper atmosphere, raising the prospect of diseases circling the Earth like a cloud.

An Indian balloon which sampled air between 20 and 41 kilometers (12–25 mi) above the Earth documented three new species of bacteria.[9] All were adapted to survive the high levels of ultraviolet radiation found at high altitudes.

1 In The Chernobyl Reactor 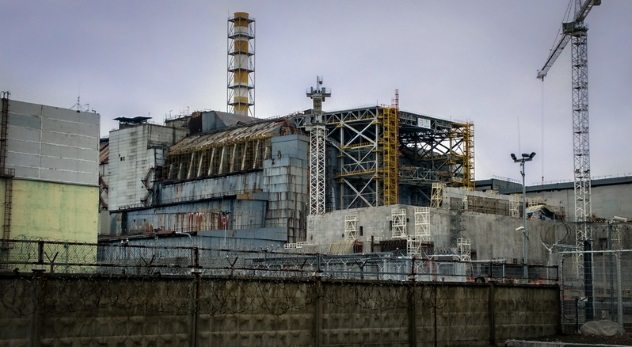 The explosion at the Chernobyl reactor in 1986 was one of the worst nuclear disasters in history. Radiation can do direct harm to cells, but it also damages DNA, causing deadly mutations. It is impossible to know how many cancers and deaths were caused by the accident. However, while humans fled the site, other organisms went in the opposite direction.

Black fungi were found growing in the highly radioactive power plant itself, where radiation levels were still, for a human, dangerously high.[10] When these fungi were cultured in labs, it was found that they grew toward sources of radiation as if seeking it out. When exposed to radiation, the fungi grew faster. It seemed that they were using radiation directly as a source of energy.

The fungi were black because of the common pigment melanin. When gamma radiation hits the melanin, the pigment absorbs it and uses the energy to drive metabolic reactions. Humans have the same pigment in their skin to protect from radiation. It is possible that humans may also, in a very limited way, be eating gamma radiation just like the fungi.

Ben Gazur is a freelance writer interested in history and science. He can be found tweeting pictures of ancient graffiti at @BenTheEpicure.

Read more about life finding a way on 10 Animal Adaptations To Hostile Environments and 10 Desert Animals With Brilliant Survival Adaptations.